By now, you’re probably sick of hearing about Marie Kondo and how people are purging and tidying their homes following her methods. It’s been all over the place since her show came out on Netflix in early January. And I must admit, I’m in on the craze! I haven’t read The Life-Changing Magic of Tidying Up, but I absolutely love the messaging behind Marie Kondo’s bestseller. Remove items in your life that don’t bring you joy and you’re well on your way to creating the life you want. Even though I didn’t read the book, I did binge the Netflix series and I ate it up. There’s just something so satisfying about seeing a messy room pared down to only the items you truly love and need. Finn and I are actually really great at purging items in our home. We use this paper bag method, so we’re constantly bringing items to donate. Plus, we do a good clean out every season or so. When you live in a small space, it’s just not possible to hold onto excess stuff. 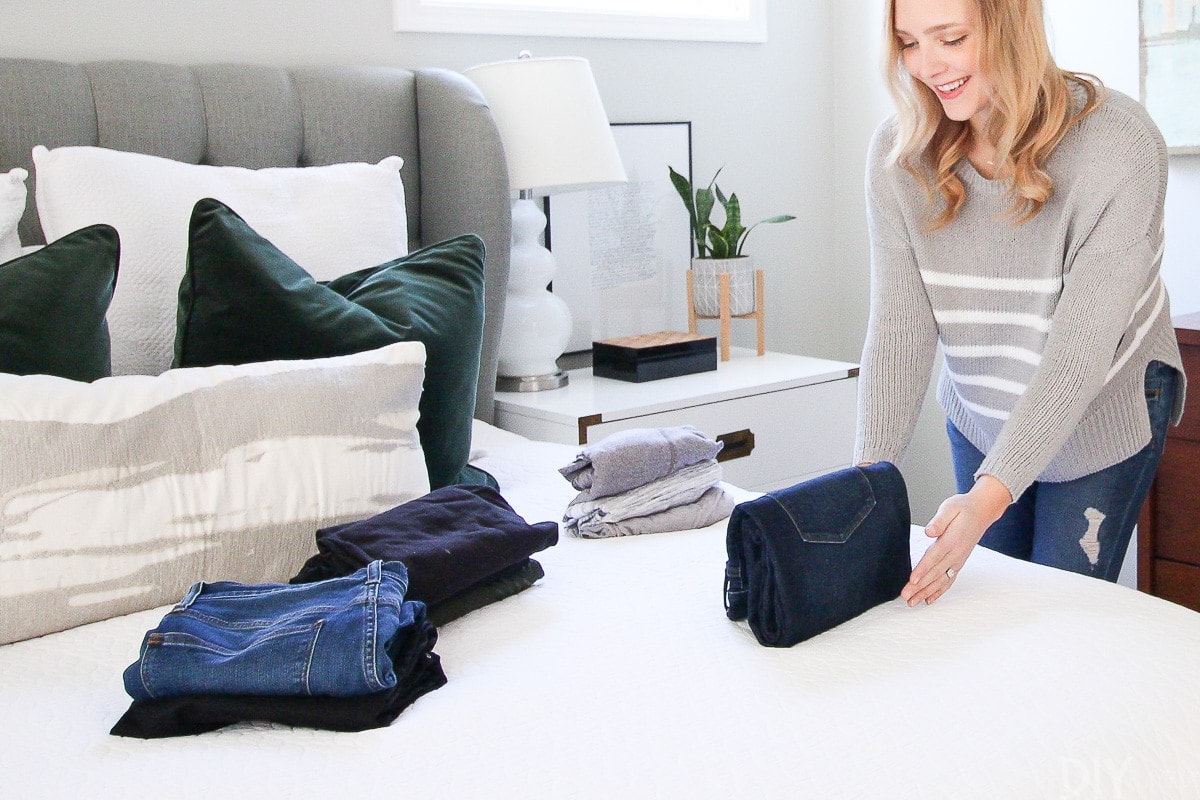 But there was one thing from her show that I really wanted to try out in our household…and that’s the Marie Kondo fold. 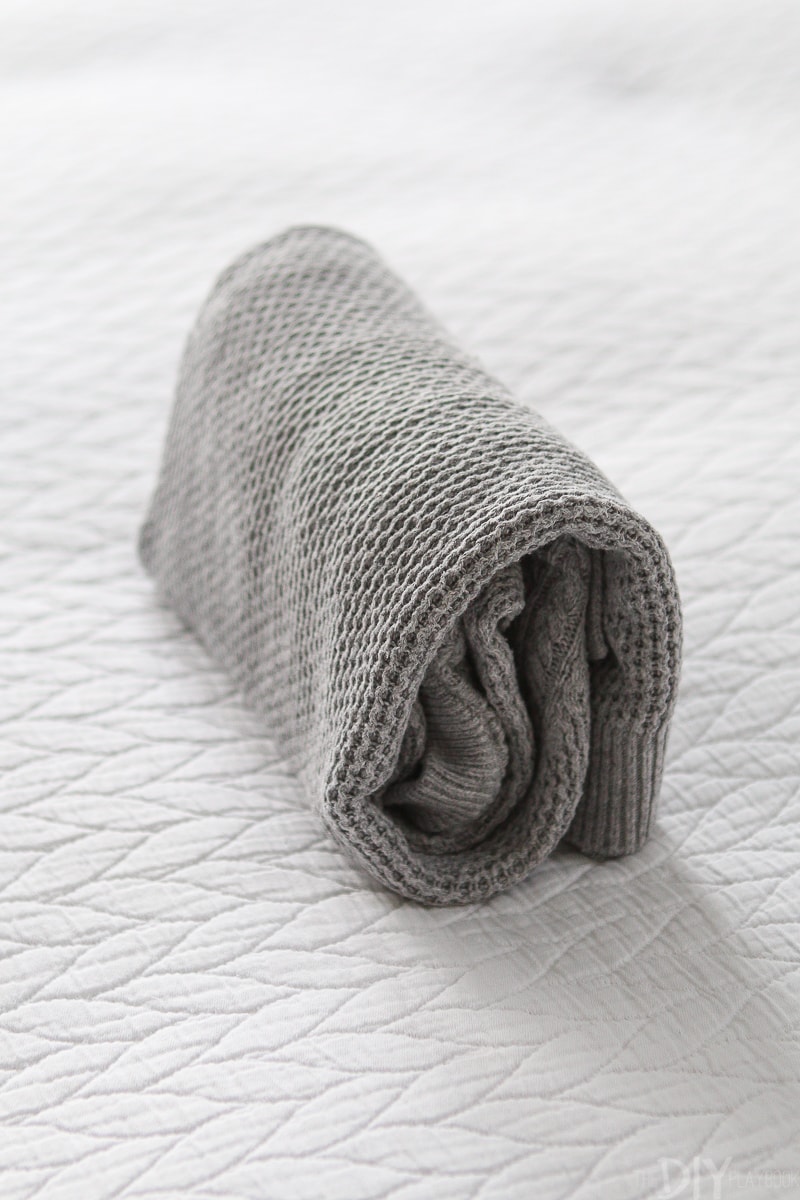 Marie has a method of folding clothing into small rectangles that can “stand” on their own. She then advises you to prop up each piece in your drawer so you can see every item at once. Instead of digging through your drawers to find a shirt, you can see all the shirts you own neatly displayed and in sight. While I do keep my drawers pared down, I wasn’t using the Marie Kondo fold. I’m not gonna lie, the fold is actually a bit tricky. Specifically, because each item of clothing is folded differently depending on the style. For example, a tank top isn’t folded like a t-shirt. While I was folding all of my clothing, I was constantly pulling up YouTube videos to figure out how that particular item needed to be folded. It was comical…me stopping and starting these videos to make sure I got it just right!

After lots of practice, I now have the basics of the Marie Kondo fold down pat. And I figured I would share them here on the blog so you can avoid spending so much time searching YouTube when folding your own clothing.

How to Fold a Sweater Okay, let’s start with how to fold a sweater. This process will also work for any long sleeved shirt. Marie is all about appreciating the piece of clothing and appreciating it as you fold. Honestly, this part is a little “woo woo” to me, but it makes sense. Treat your clothes with respect, especially when they bring you enough joy for them to stick around in your closet! She advises smoothing out and touching the clothing as you fold and thanking it as you go.

Also, make sure you’re folding on a flat surface. I like to do it on my bed, but you could also do it on a table or stretch out on the floor.

The above gif shows you the steps in order of how the fold goes down. It’s all about getting the piece of clothing into a rectangle, so it’s easy to stand upright and stack with other clothing. This folding technique is also supposed to prevent wrinkles and create more space in your drawers.

You know you’ve done a good job when you can stand the piece of clothing upright! That’s the ultimate test!

How to Fold Jeans Jeans are a tad easier than sweaters! Here are my folded jeans. The thick material makes them a lot easier to stand upright. I store my jeans in a wire basket in my closet. It’s crazy because they were all piled in there haphazardly before and I’d have to dig to find the pair I wanted. Now I can easily see all of them and choose the ones I need. It’s been a game changer! So I only ended up doing my jeans, sweaters, workout clothes, and pajamas. However, you can use the Marie Kondo fold for your underwear, socks, and bras too! I didn’t go that far but would be interested to hear if any of you have tackled those categories too. If you want to learn how to fold those items, this article has a good step-by-step tutorial for each one. Here’s a peek at Finn’s t-shirt drawer. He doesn’t do the Marie Kondo fold but has his own unique way of folding that he has been doing for years. It definitely works for him and he is able to navigate his drawers quickly and easily! 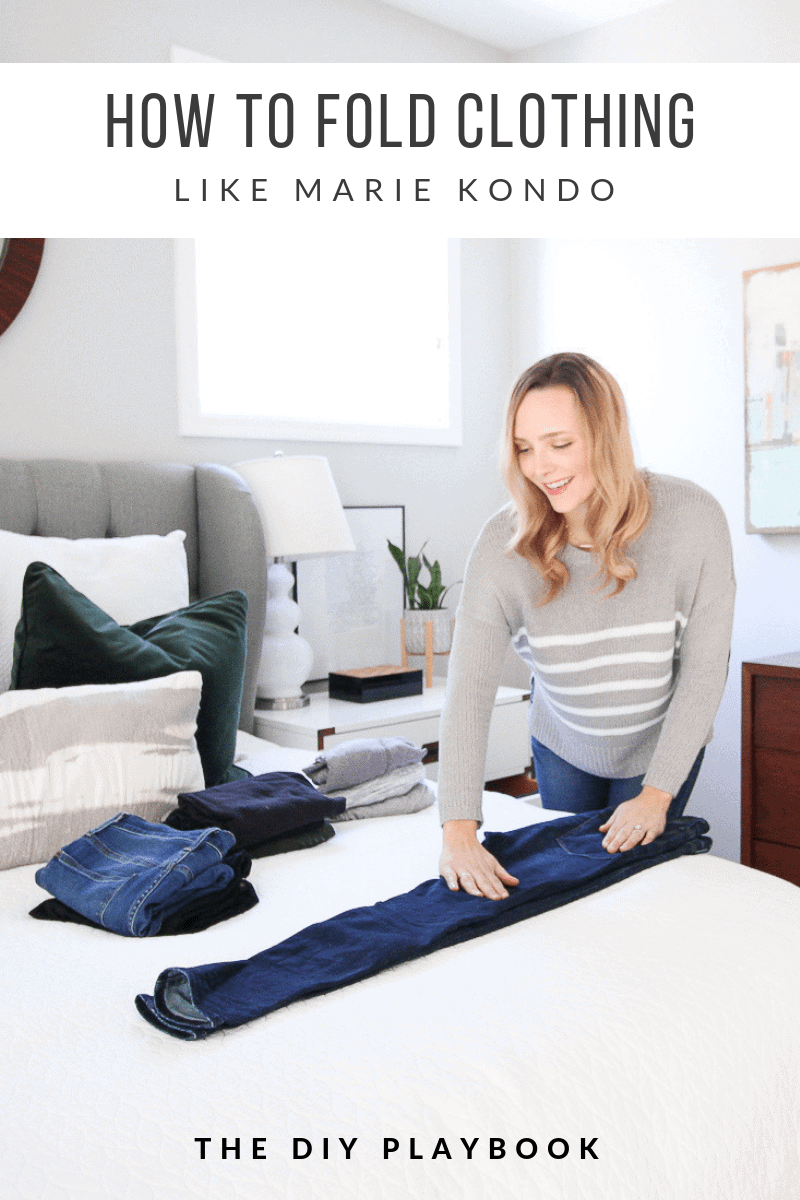 The crazy thing is I didn’t get rid of one item in my drawers because I was already pretty pared down. My drawers were originally packed to the brim and kinda hard to open. After doing the Marie Kondo fold, they now slide open easily and I even have room for more items. It’s crazy how effective it is! Now I’m dying to know…has anyone else been folding their clothing like this since reading the book or watching the show? I think I may be converted for life!

Oh, and this is actually a pretty awesome Frugal February activity. I took an afternoon to fold my clothes and I instantly felt amazing. And money sure as hell can’t buy that!