Are you guys ready for lots of awkward photos of us? We sure hope so, because that’s what this morning’s post is alllll about.  If you’re not fully awake yet (still on coffee cup numero uno), then this post may liven up your morning. At least all of the bright pops of red will get your eyes to open a little wider… 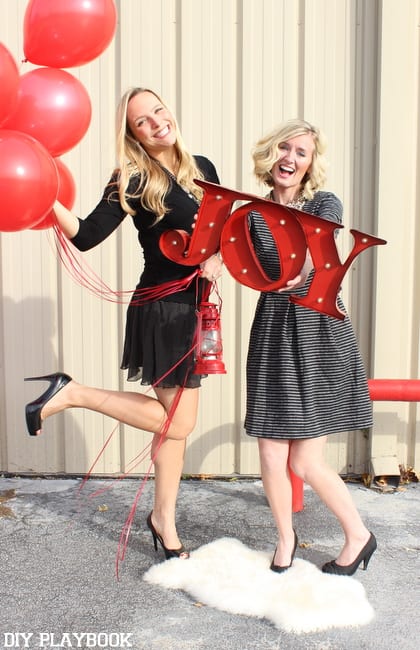 See we warned you.

Anywho…we wanted to reveal the little Christmas photo shoot we did last month for our holiday cards. We had so much fun getting all dressy and snapping these ridiculously cheesy pics, so we figured we might as well chat all about it here on the blog.

A Behind-the-Scenes Look of our Christmas Card Photo Shoot 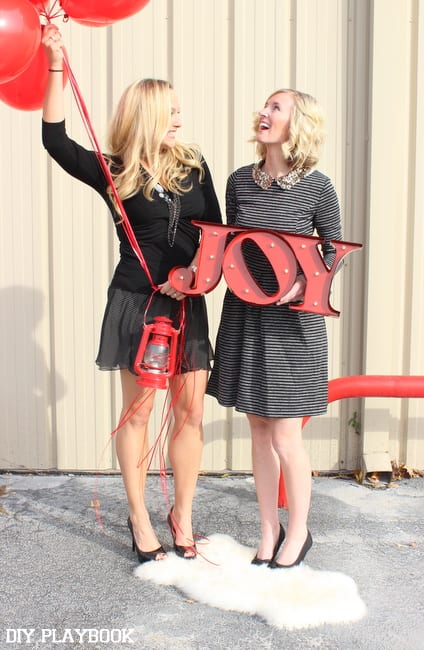 But first, let’s back up to last year’s Christmas card photo shoot. No, we did not blog about it (total Christmas rookies), but we did force Bridget’s patient husband to snap 1,000 photos of us for our little Christmas card. We went in with absolutely no idea as to what exactly we wanted to do, and we made poor Matt traipse all over town with us. Honestly, we had soooo much trouble finding a good shot for the card. Not because we’re super picky about the way we look (obviously we’ve gotten over the need to look perfect, as evidenced by some of the following pics), but because all of the photos we snapped made us look like we were a….couple. Not like a best friends/bloggers/business partners couple…but a couple-couple. Yikes.

We didn’t want to give the wrong impression (“not that there’s anything wrong with that!” -Seinfeld), so it took us a long time to get the right pose for the photo.

Fast forward to this year, where we were not making the same mistake twice. We went in with a gameplan (props, red accents, glam), and used a tripod instead of a husband. Sorry, you’ve been replaced Matt.

We were done in 15 minutes flat, and even managed to make a new friend during our photo shoot (the man who owned the building we posed in front of decided to come ask why there were two crazy blondes running around with red balloons on his property. Obvi we won him over and even told him we’d send him a card. #thanksBob) 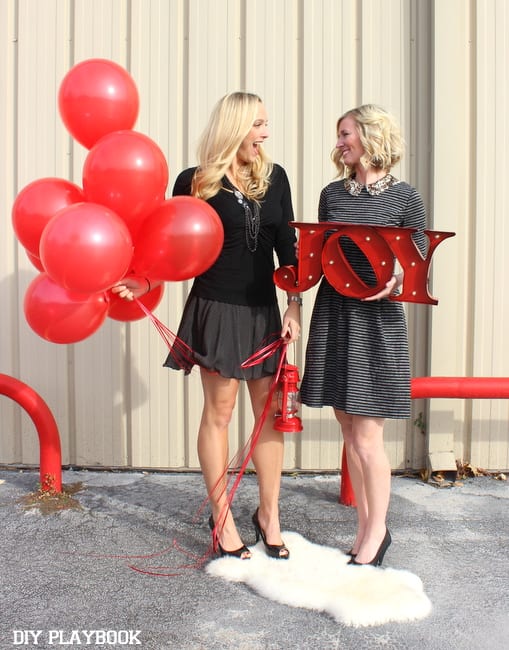 Now that we have a few photo shoots under our belt, we’ve concluded that things are typically waaay less awkward if we have props. At least it gives us something to do with our hands, and we don’t have to awkwardly post with the chicken wing arms and selfie face.

B found this adorable JOY marquee sign at Michael’s for a steal. Not only did it come in handy for the photo shoot, but she was also able to incorporate it into her holiday decor. That’s a total win-win. 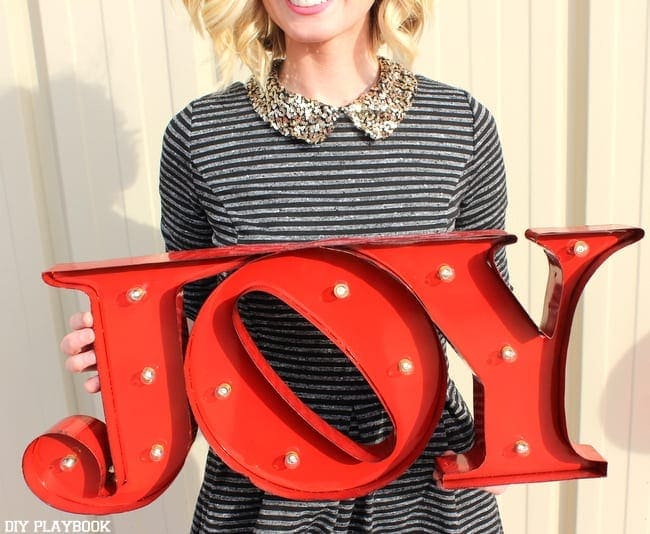 The balloons on the other hand…we’re a tad difficult. 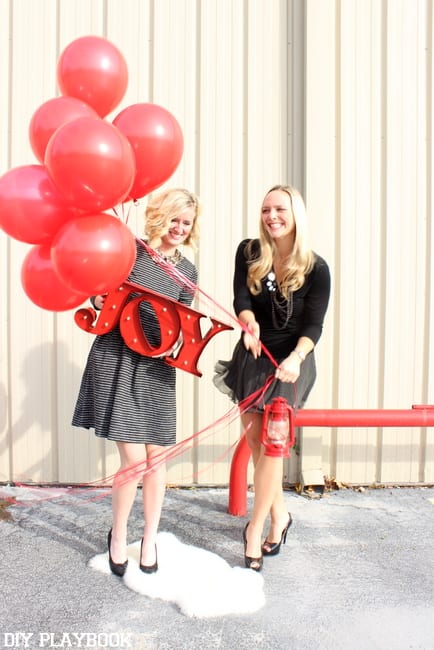 Note to self: Don’t use props that may fly away. But they sure did look cute, and that’s all that matters! 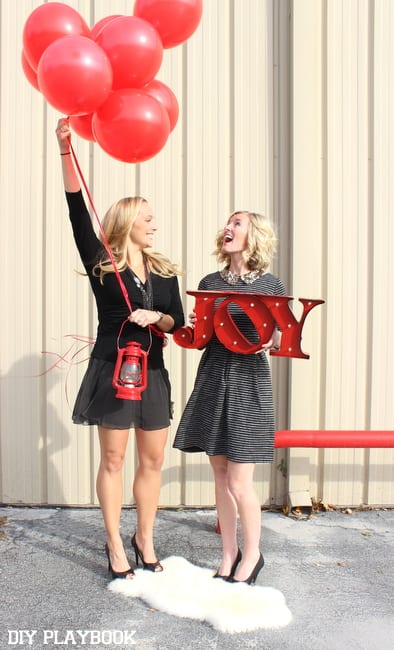 We also used one of our sheepskin throws from Ikea to add some winter texture to the pics. I mean it’s perfectly normal to have a comfy sheepskin hanging out in a parking lot right? Who doesn’t want to just curl up and take a nap on that thing? Oh, the weird things you do as a blogger… 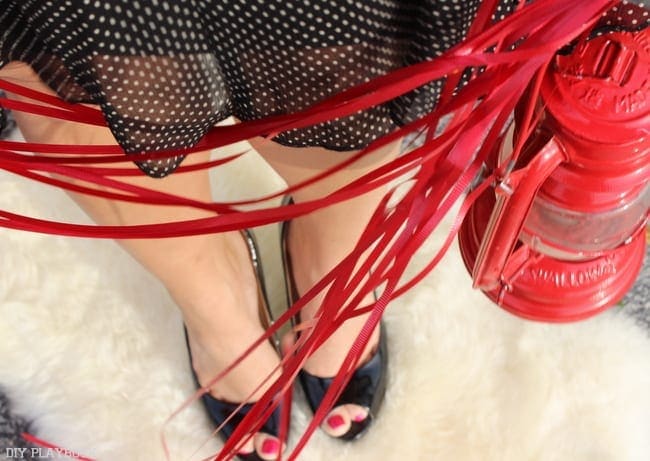 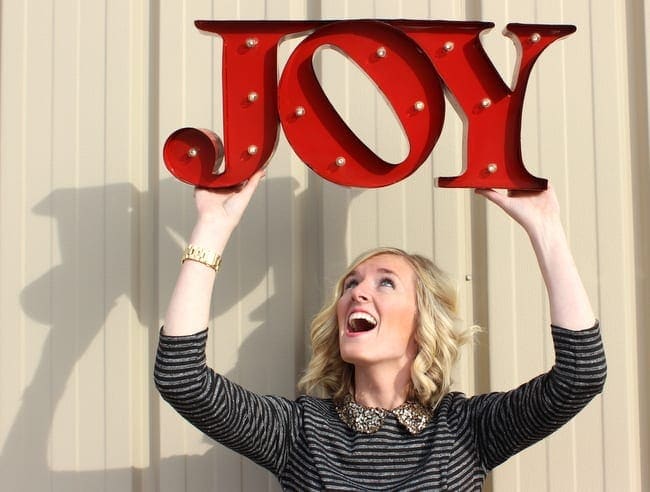 This just might be my favorite shot. Bridget is raising the roof for JOY. Not an inch of “Grinch” can be found in this holiday diva! 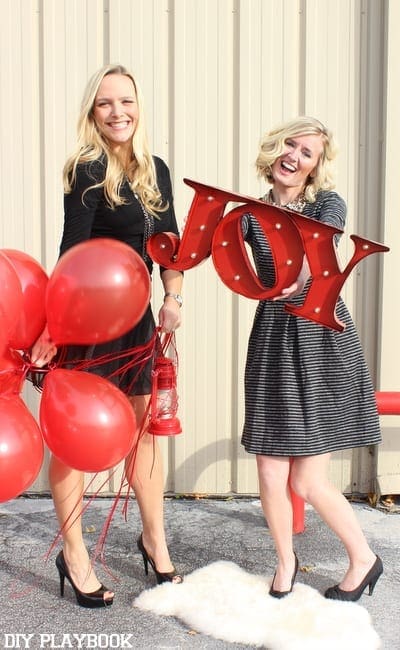 So there you have it! Our holiday photo shoot filled with lots of red, glam, and a heck of a lot of cheesiness. We’ll be back later this afternoon with the deets on our Christmas cards (including the “winning” shot from this bunch!)