Moving Out of St. Louis with PODS

(Disclaimer: We have partnered with PODS to bring you this post. The information and opinions expressed are 100% our own, and are not influenced by PODS)
Let me first say that moving is hard. It’s really really hard, and time-consuming, and stressful.
But moving is also a very real and inevitable part of life.
So with our move from St. Louis to Chicago looming over our heads, Finn and I brainstormed on how to get all of our crap belongings from point A to point B, without ripping all of our hair out.
The problem was we couldn’t just load up a truck and bring all of our stuff to our new apartment in Chicago, because we didn’t yet have that new apartment in Chicago. Minor detail…
So we considered storage. Then we realized we didn’t want to box up all of our stuff, put it into a truck, unload the truck into a storage unit. And then do that alllll over again once we found a place in the city. #backbreaker
After hemming and hawing about a few options, we finally had the brilliant realization that we should use a portable storage container.
That way we could load up the storage unit one time, transport it to Chicago, and then unload it once we found our new home. Genius! Less time spent moving, more time spent finding a new home.
After researching many companies, we finally decided to go with the company PODS. 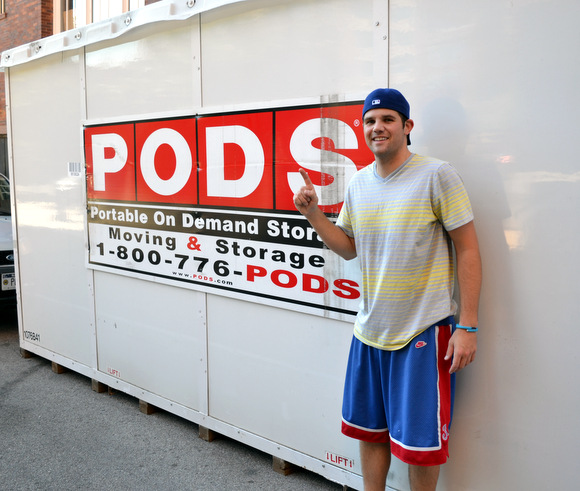 We liked their flexibility, and how they basically took care of absolutely everything. All we had to do was load up that bad boy, and lock ‘er up.

So let’s get into the nitty gritty of our move OUT of our St. Louis loft. (Yes, tears may have been shed.)

We decided to devote 2 days to report to “move-out duty.” That way we could have our PODS container delivered one day, and then fill ‘er up the next.

Since we live in downtown St. Louis, we were a little worried about where we would actually put the container. It’s not like we’re in a house where we could just plop it on the driveway. But after consulting with our building management, we found out we could put the container in our back alley, as long as it wasn’t blocking the street or the dumpsters. 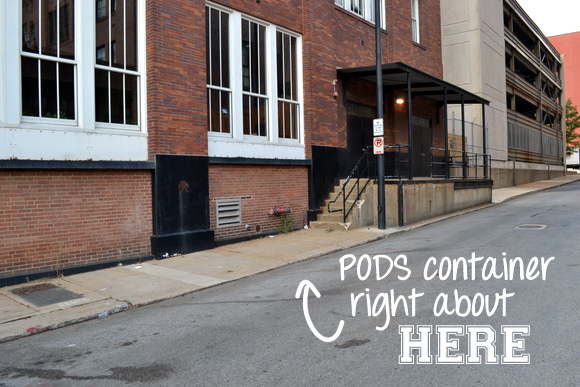 PODS also assured us that it was a-okay with the City of St. Louis. In fact, they handle registering the device with the city.  As long as you have it out there for less than a week…you’re not breaking any laws.

On a nice Friday afternoon, our PODS container was delivered. Here are some photos of the thing being lifted and moved onto the ground. Pretty crazy technology they have… 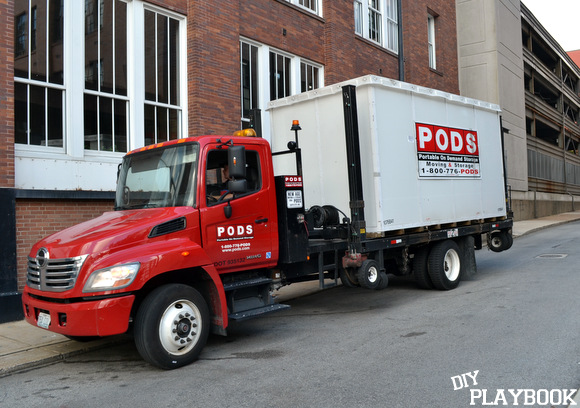 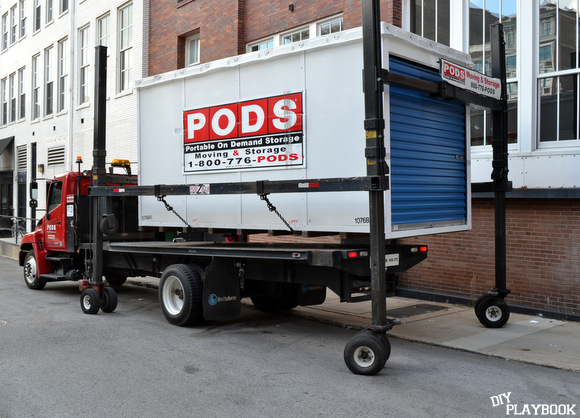 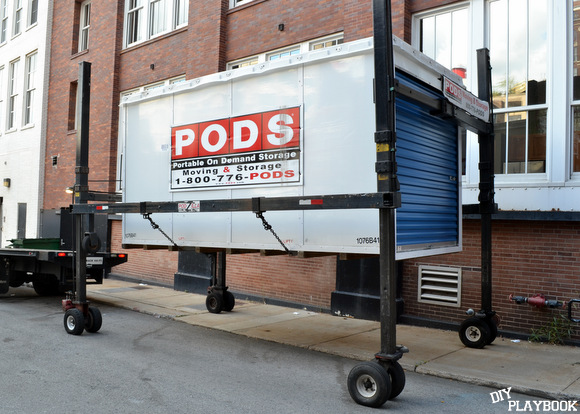 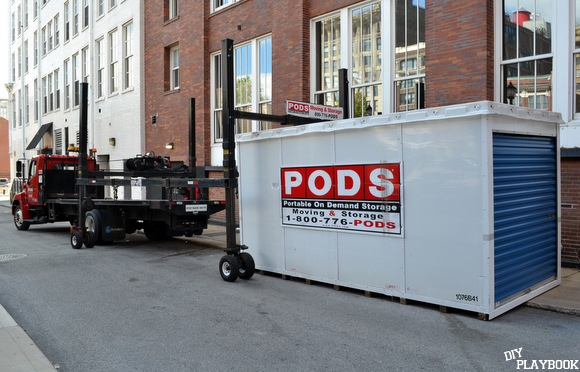 In the last few years of living together, Finn and I have acquired a lot of stuff. I mean a lot. Too much stuff if you ask me. Before we saw the container, we were a little unsure about cramming all of our belongings into it. In fact, we thought there was a 0% chance of us getting it all in that bad boy.

But, the moment we saw the PODS container and opened it up…we became a bit more optimistic.

So do you think we can fit all of this… 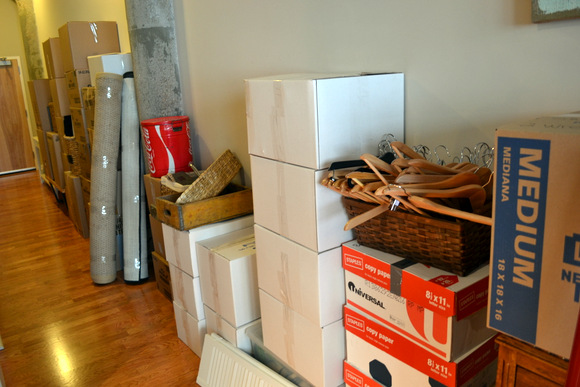 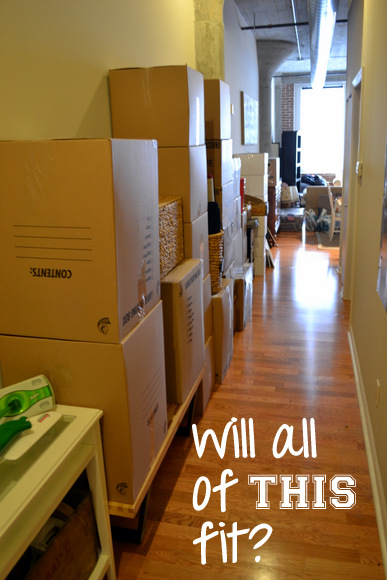 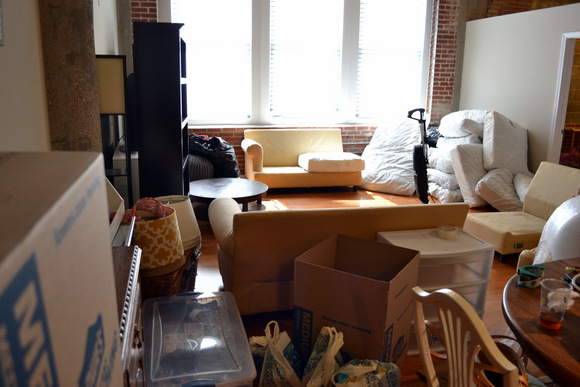 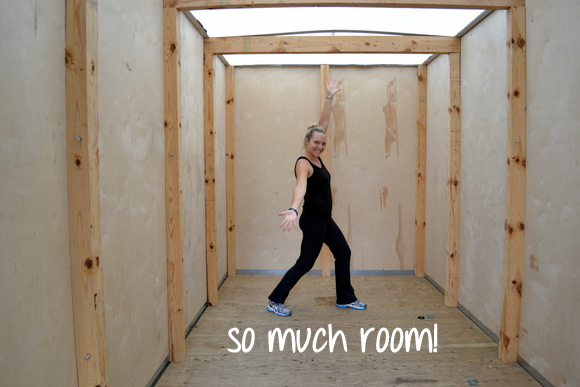 I’ll let you know next week when we chat more about the big move. I’ll also have some packing tips and tricks for ya…