Updating Curb Appeal is Worth Your Time

As I’ve shared my landscaping overhaul this summer, many readers have reached out asking how they can improve their own home’s curb appeal without undergoing a large scale makeover like mine. Because let’s be honest, it’s a great question because most people aren’t going around re-doing their entire landscaping every summer. And rightfully so, because increased curb appeal often translates to increased property value. 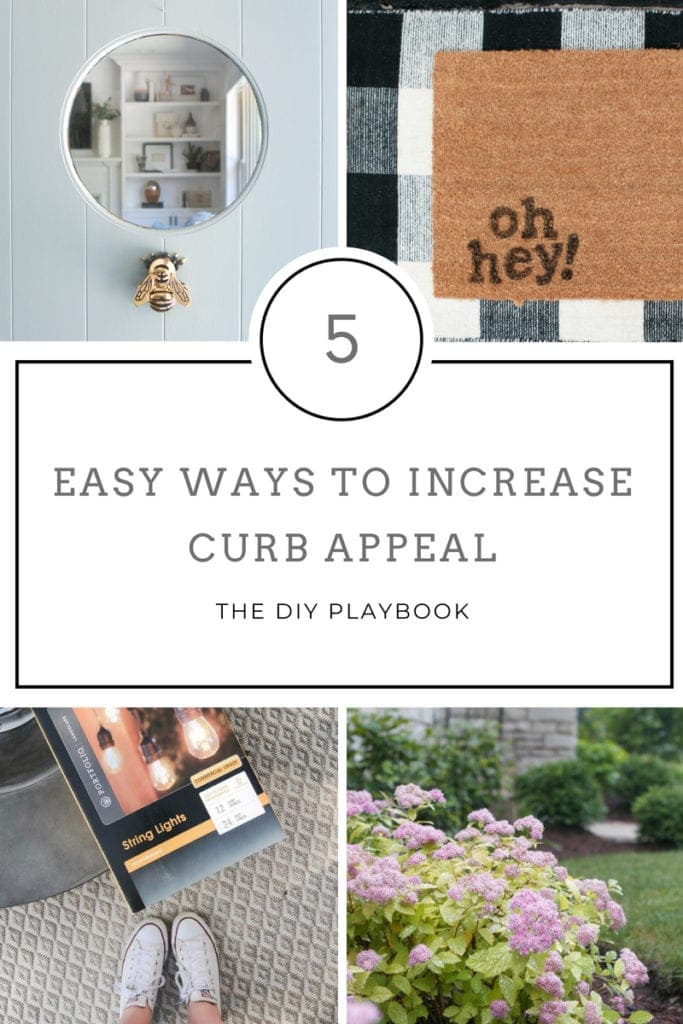 Investing in the outside of your house is important, and I’m here today to share some ways you can do just that without breaking the bank.

Here are 5 easy ways to update curb appeal, and the best part is that all of these projects can be tackled over a free weekend!

1. Freshen Up The Paint 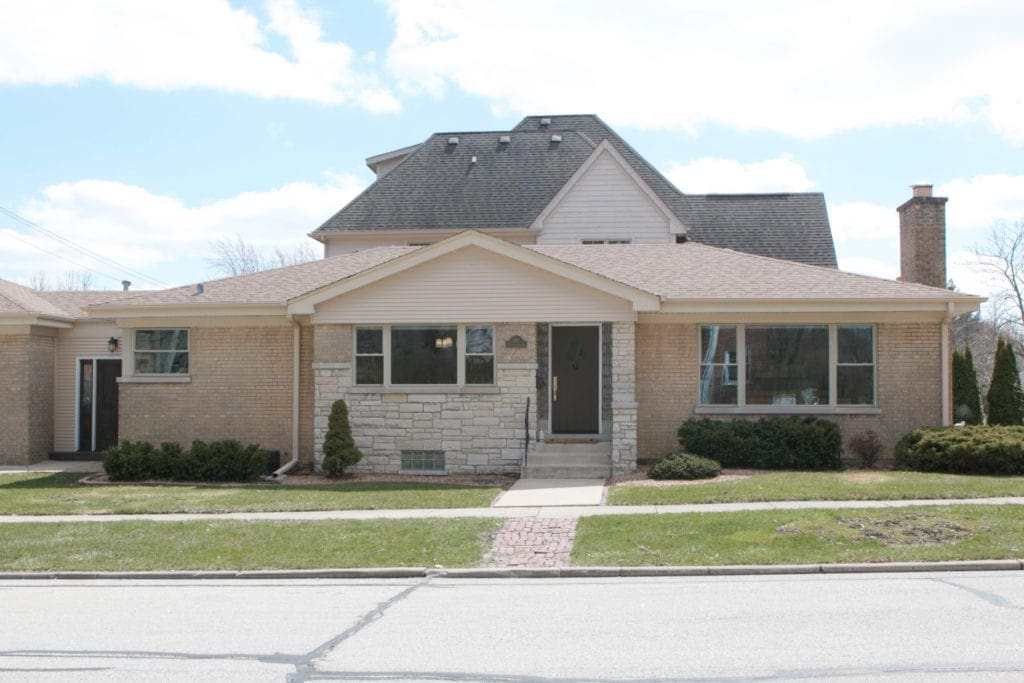 In a perfect world, I would have loved to paint the brick of my entire house, but unfortunately, I got an estimate to hire this out and the total came in at around $13-15k! I don’t love the color of my brick, but I definitely don’t hate it enough to shell out that kind of money to change it.

My alternative solution? Updating the paint on the doors and garage door in hopes that new colors would complement the existing brick a bit more. 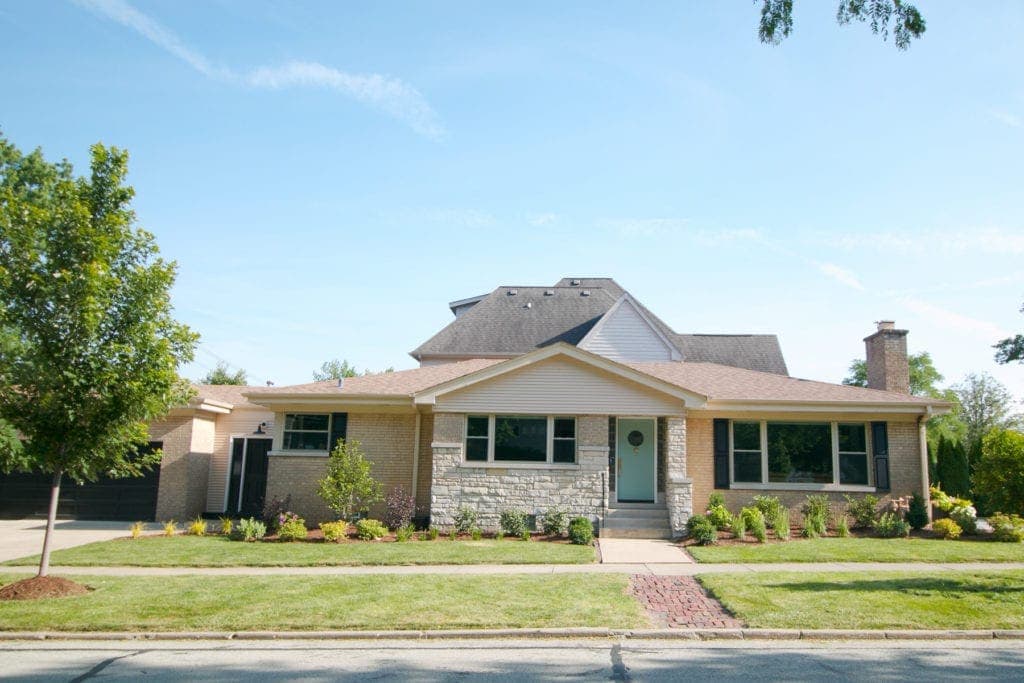 Fast forward to the time after I painted my front door and painted my garage door, and I’m very happy to report that I dislike my brick a WHOLE lot less because of the new colors I paired it with.

Plus, the new colors instantly breathe new life into the outside of our home, especially the pop of color on the front door. I’m confident in saying that adding a new pop of color on your front door is probably the project on this list that can make the most dramatic impact for the least amount of time invested. It’s one I definitely encourage you to tackle if you want a fresh look but don’t have a ton of time to devote to your curb appeal this summer. 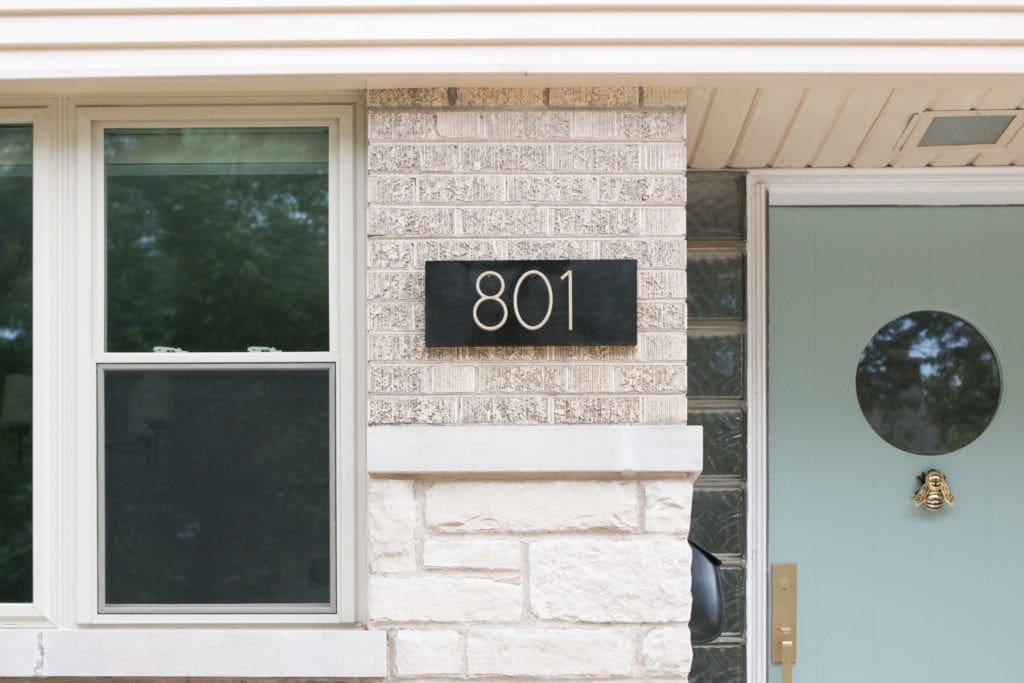 And the best part is that this project was super easy! We bought a piece of wood from Lowe’s, these Hillman black house numbers, Rust-Oleum Universal Flat Black and Pure Gold Metallic spray paint, and a picture hanging kit.

We used this tutorial and had the whole project done in an about an hour (plus dry time). Such an easy way to add a hint of extra style to your curb appeal. 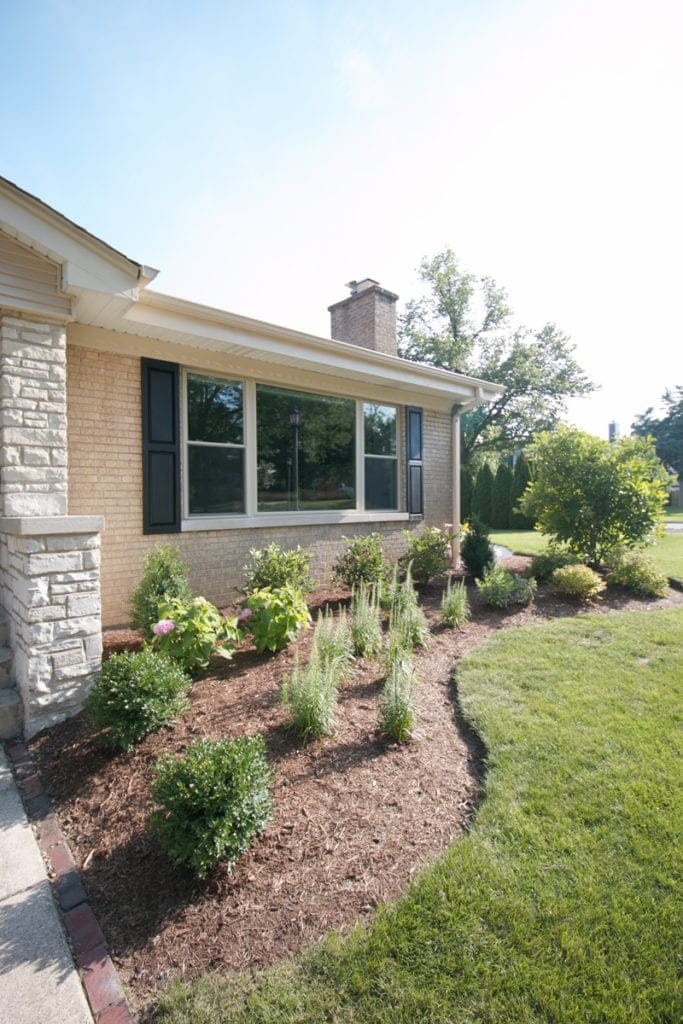 The next project we tackled that instantly increased our curb appeal was adding these severe weather black vinyl exterior shutters to the windows around our home.

The hardware and detailed directions come with the shutters, which are available in all different sizes and 9 colors! Everyone’s experience will be a bit different based on the material of your house. But since my house is brick, we needed a Dewalt cordless hammer drill to mount the shutters right onto the brick. 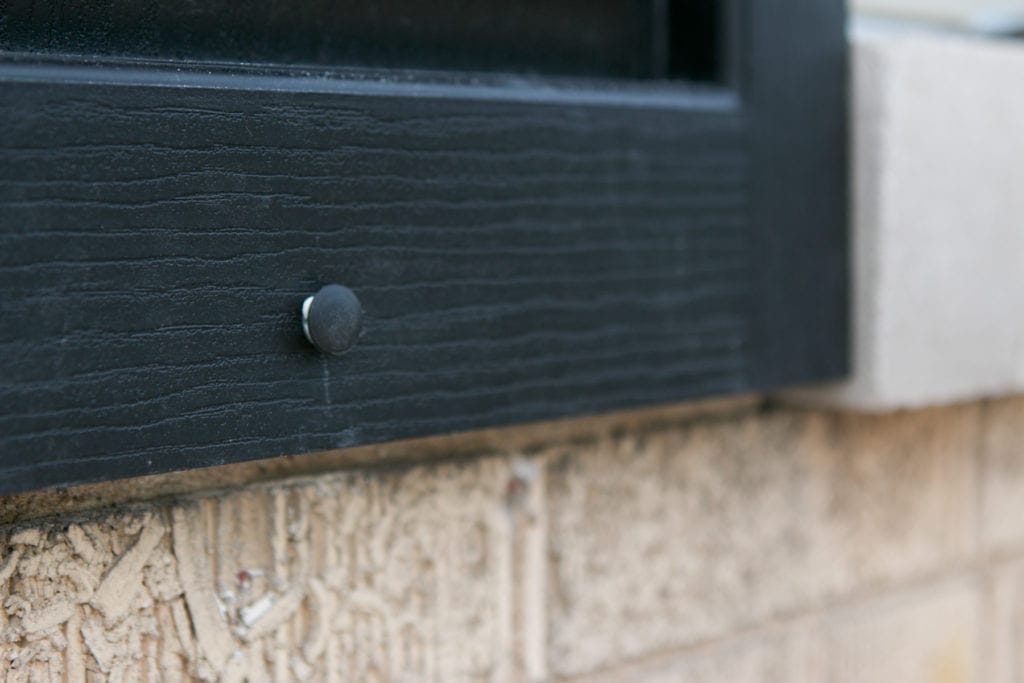 After we drilled into the brick, I was able to add an anchor right into those holes and mount the screw through the shutter and into the anchor for a secure hold. 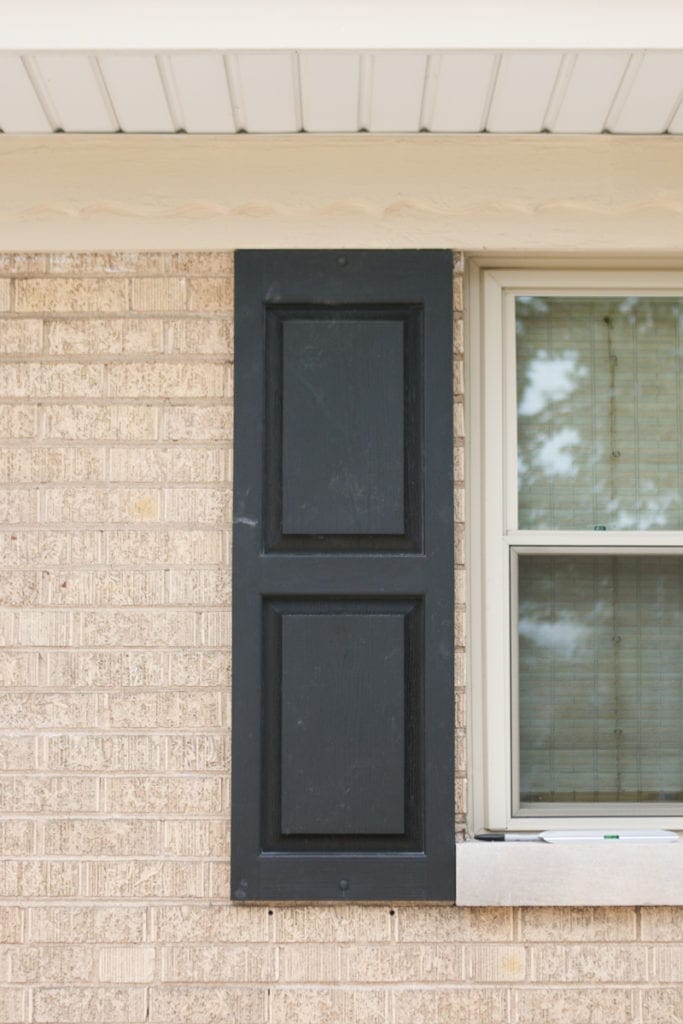 Hanging the shutters was a frustrating process before we started using the hammer drill because the mortar on our house was crumbling and didn’t hold the anchors/screws effectively. Once I ditched that method, called in the hammer drill, and starting drilling right into the brick, the process was A LOT easier and the shutters were a lot more secure. 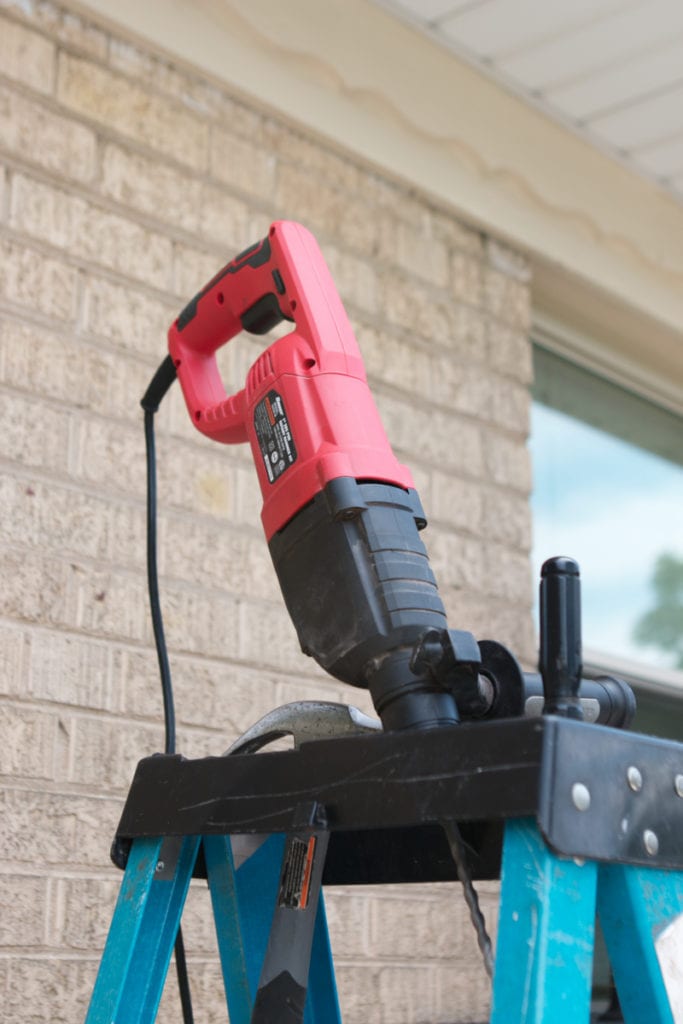 If I have any advice for others adding shutters to a brick house it would be to buy a hammer drill! It was seriously a gamechanger… just like the shutters themselves. If you’re looking to add some charm, shutters may be the way to go! Plus, they weren’t nearly as expensive as I anticipated. A 2-pack runs around $40, which was definitely a pleasant surprise! 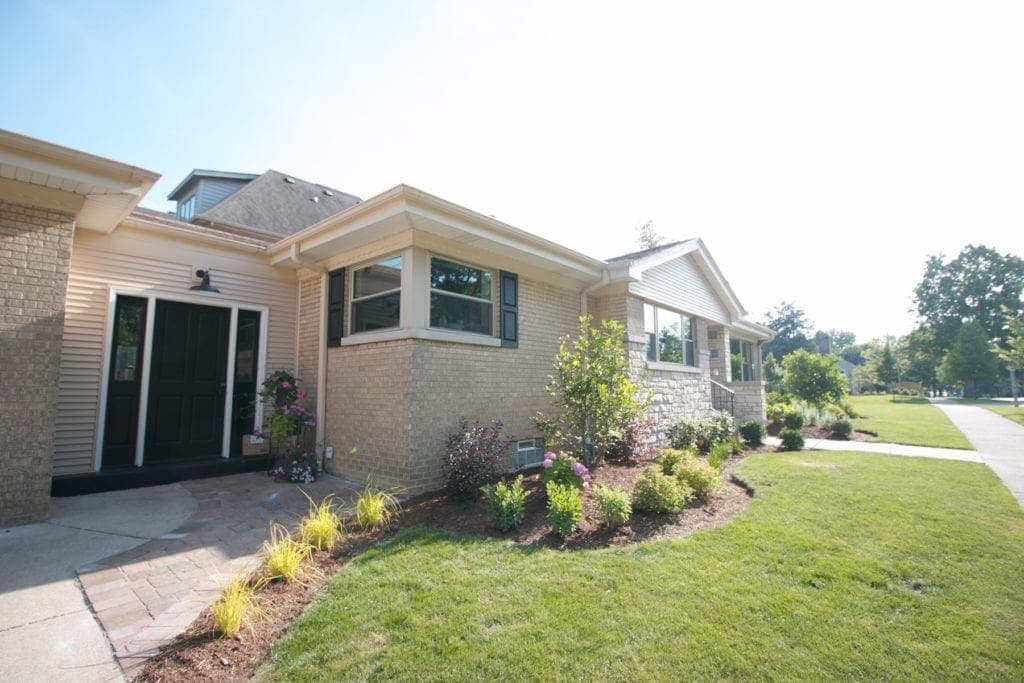 I know I’m a sucker for all things DIY, which is probably why this part of the list is my favorite. As our landscaping was getting a full overhaul by the professionals, I was busy DIY-ing some “simple fixes” that I saw as icing on the cake. Here are a few DIY details that I implemented that didn’t take a ton of time or money but are doing their part to add just a little extra charm to our curb appeal. I always hated the spirals on our railing and figured that I would have to invest in a new, more modern railing down the road. Thankfully I was wrong! With a few tools, I was able to cut the spirals off the railing and that simple DIY project brought our railing from the 1950’s right into 2018!

Another favorite DIY project of mine is creating a personalized doormat to greet guests as they arrive at your front door. This tutorial spells out how you can personalize a doormat in less than 10 minutes!

All you need is a plain doormat like this Mohawk Home Utility one and a Sharpie and you’re all set. I mean, how cute is this setup? DIY-ing this doormat literally took me 5 (yes FIVE!) minutes. 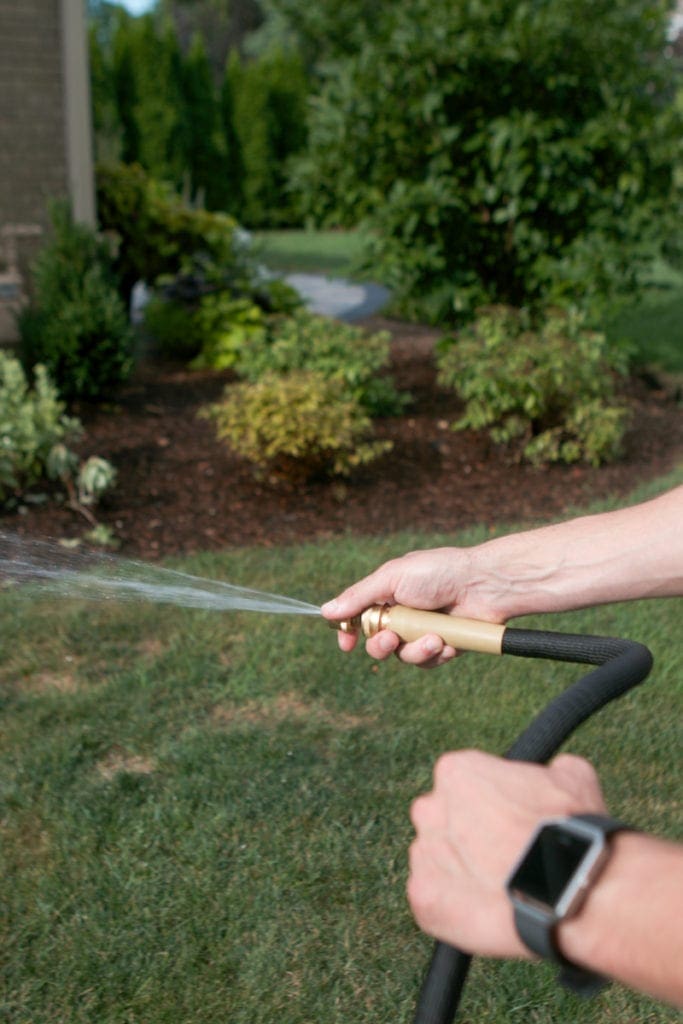 And this one isn’t necessarily a “DIY” project, but I had to sneak it in because it’s been a game changer for us. We’re all about hiding our hoses, and used to use a box we had to wind up… but if I’m being completely honest, the struggle of fighting that hose was real. And so darn annoying! 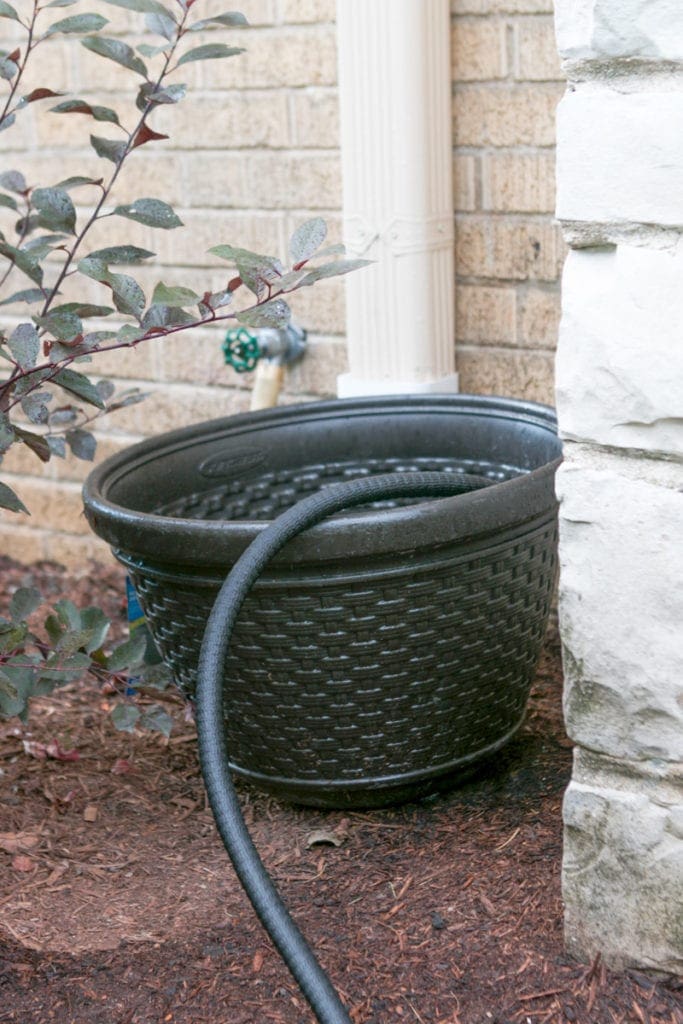 We recently switched over to this Zero- G expandable hose and I’m officially obsessed. It’s super lightweight so pulling it out to water is a breeze and when you shut off the water, the hose retracts by itself! Then all I have to do is plop the lightweight hose in this Garden Treasures hose bin and it’s concealed without any hassle.

Maybe this one doesn’t technically increase curb appeal, but man oh man does it make watering less frustrating. And I’d have to argue that when it’s not as annoying to water, you’ll be more apt to do it, which will keep your plants looking great, which will ultimately increase that curb appeal. 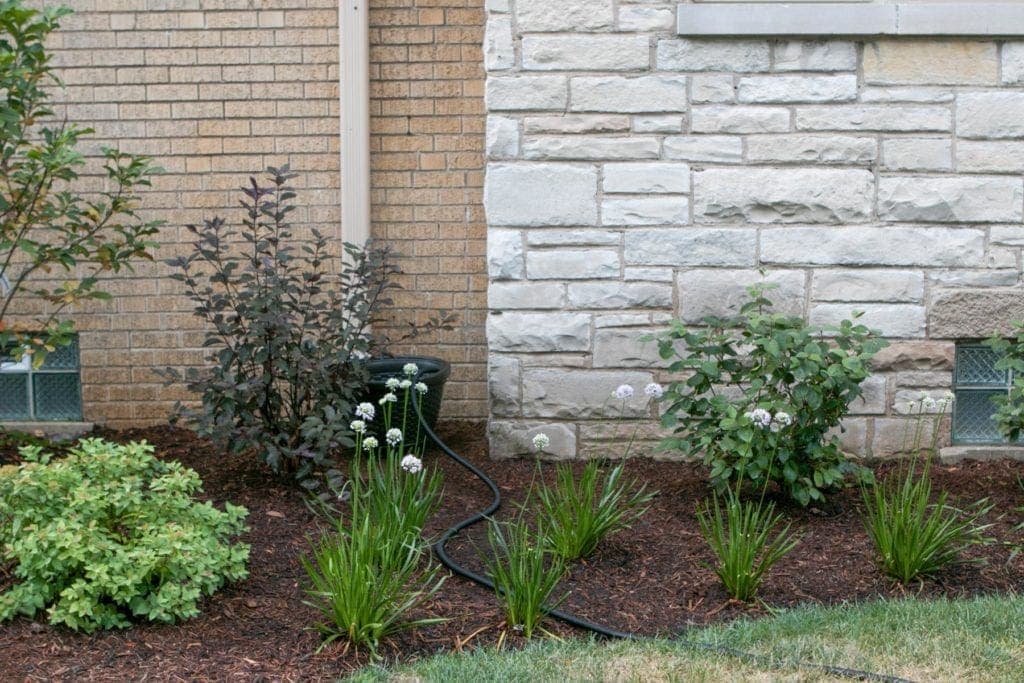 Haha… well, maybe that’s a stretch (pun fully intended), but my point is that you shouldn’t overlook these simple fixes that work together to make your curb appeal a bit more polished. These little updates add up and the best part is, they don’t cost a ton of money or demand a lot of your valuable time!

And last, but very not least, updating the outdoor lights on your home is a project that can also make a big impact. 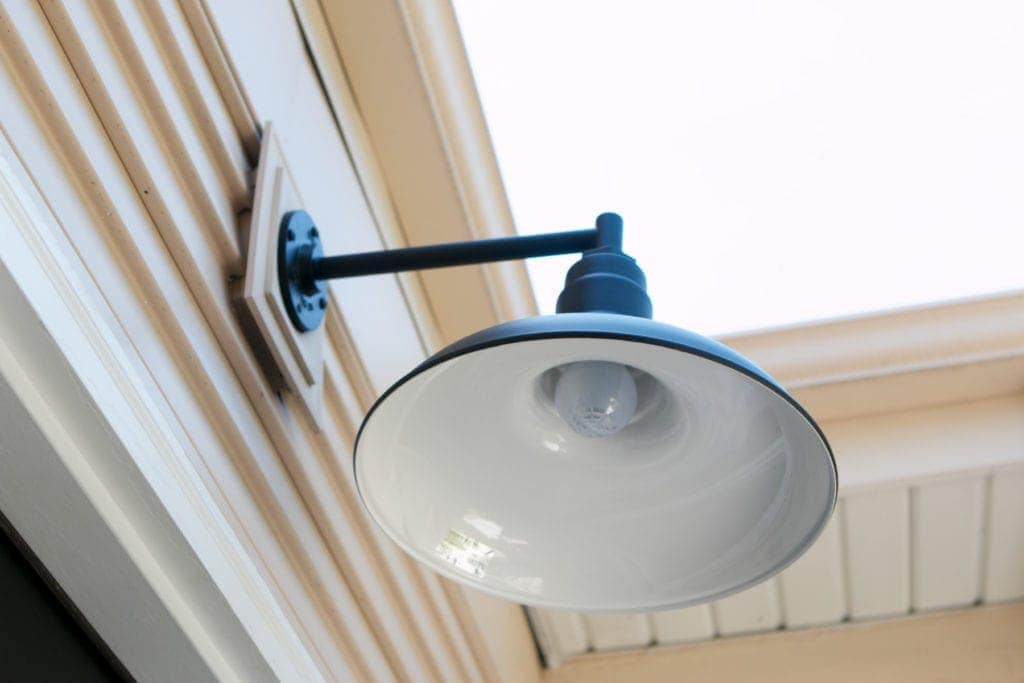 We switched out the outdoor fixtures on the outside of our home (using this tutorial), which immediately updated the look AND added a lot more light to our entryway at night.

We also added Portfolio string lights to our patio and I still can’t believe how much cozier and inviting the space looks. The best part is that these lights are on this Utilitech timer, so they pop on and off even when we’re not home or don’t feel like walking outside to switch them on/off. Updating the lighting on your home to make sure it’s on trend is another easy way to update curb appeal. We even rounded up some of our favorite lighting options under $200 in this post.

You Can Do It! 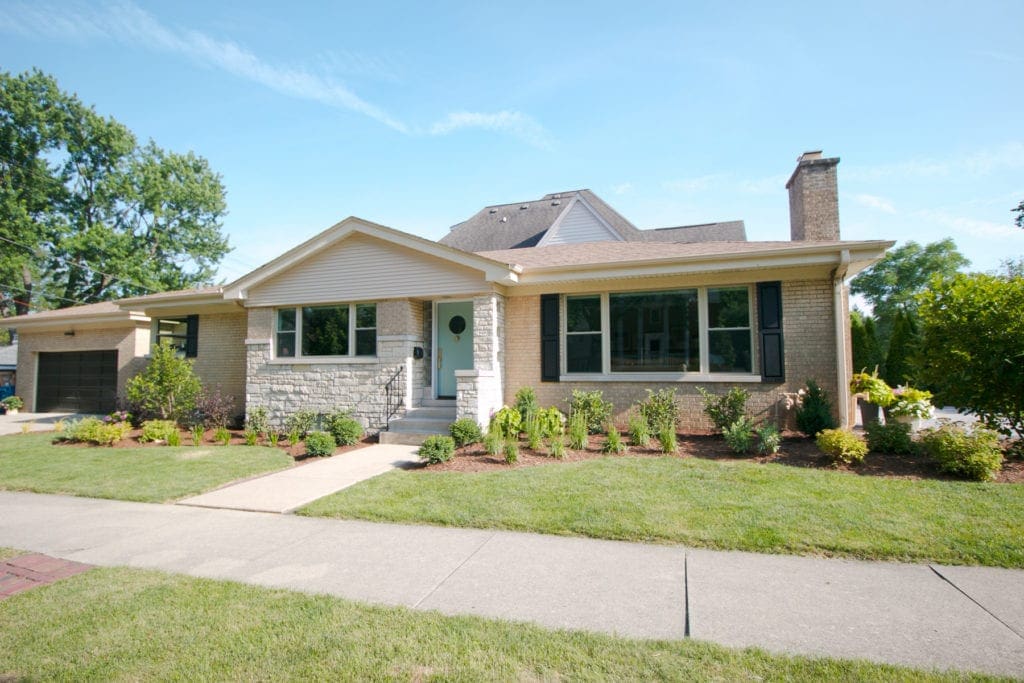 Hopefully, today’s post stirs up a few ideas on how you can improve your curb appeal without having to undergo a full landscaping overhaul. Sometimes outdoor projects can seem daunting, but just remember, every little bit helps! Just keeping the landscaping polished or cutting back some of the overgrowth would help do the trick. 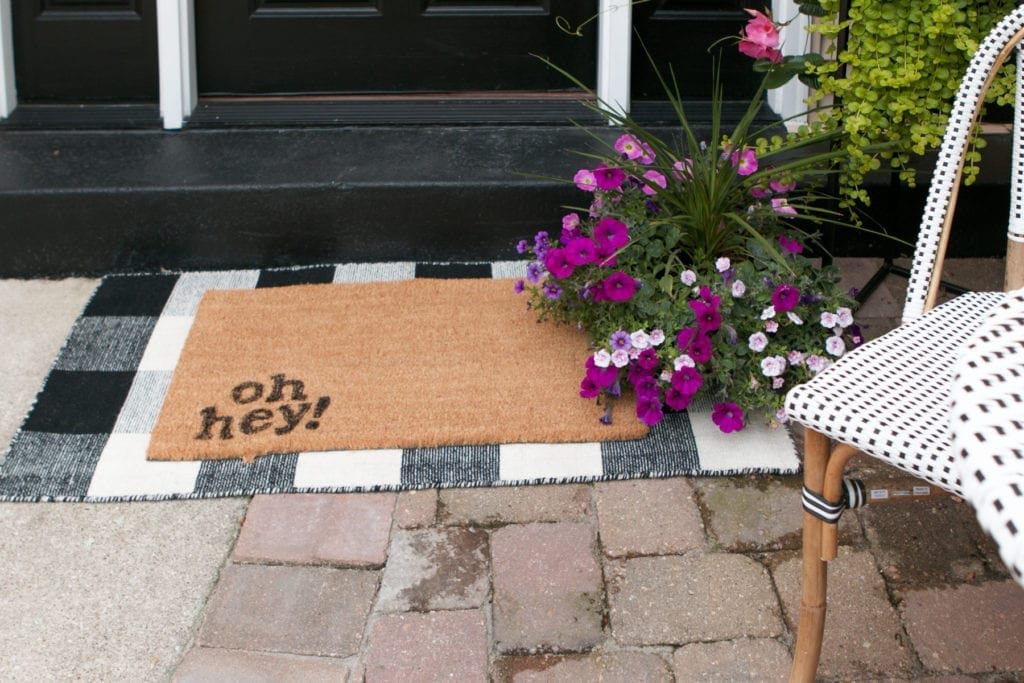 Plus, the additional projects sprinkled throughout this post will help even more! Even if you have time to tackle just one from this list, that counts! And if you’re anything like me, one will turn into two, then 3, and before you know it, all of your neighbors will be taking notice.