I’m back with another progress report on our landscaping and wait until you see the latest! Let’s just say, we have a lot to catch up on… 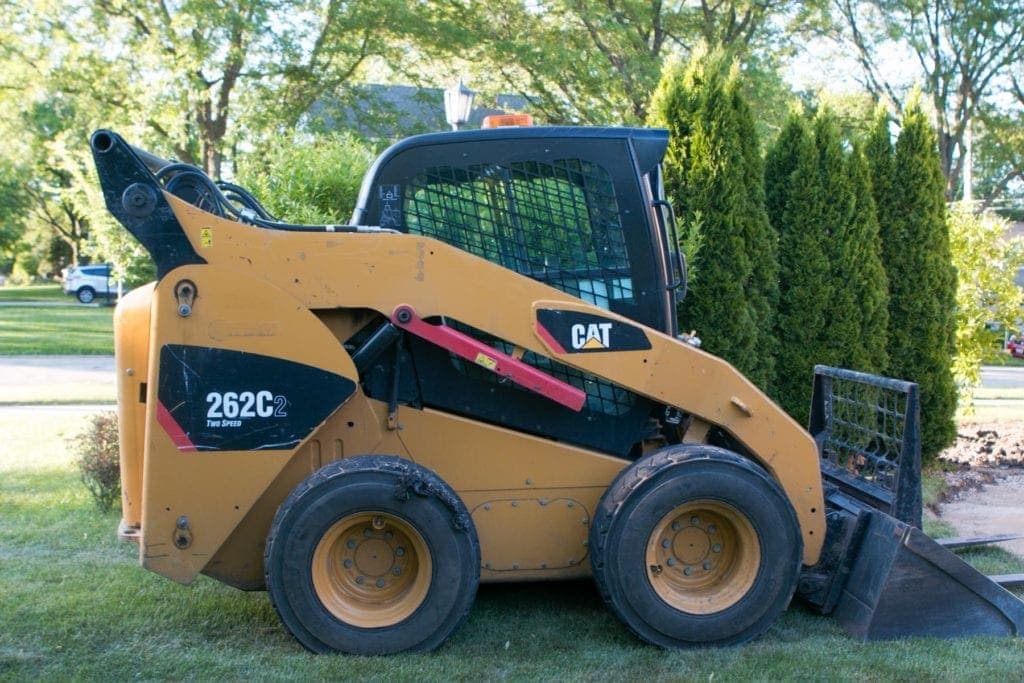 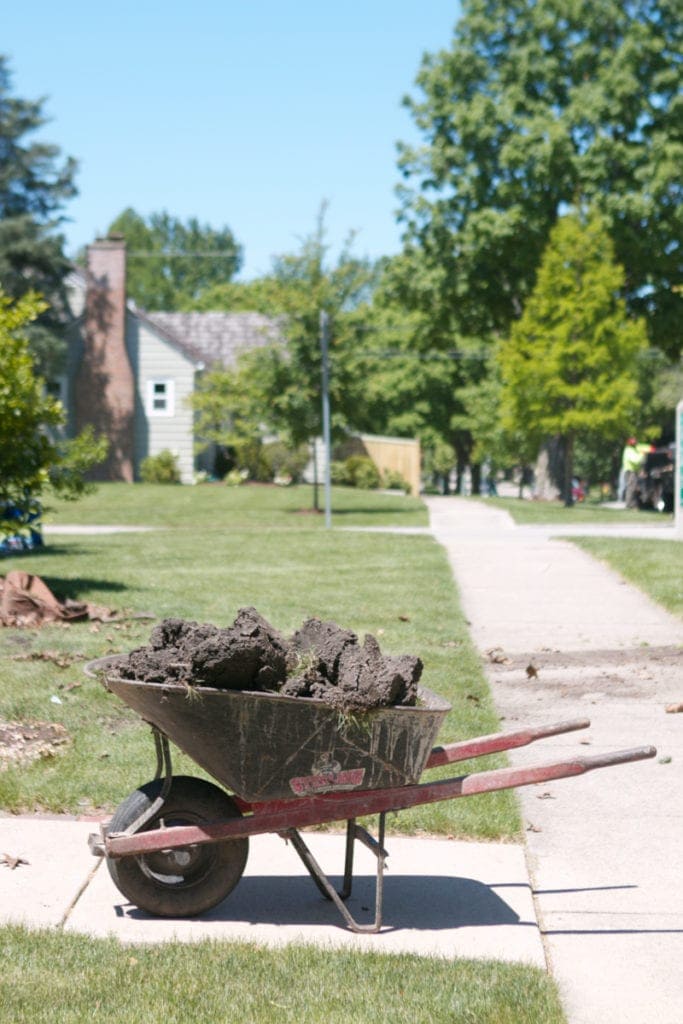 I know a lot of you followed the progress of our landscaping on instaStories last week, but honestly, a lot of the work was happening faster than I could document! So today I figured I would stop in with another update. I’m organizing the progress by what the landscaping team (2 guys!) got done each day last week.

Our landscaping team arrived early Monday morning and worked all day (and evening!). These guys have such a rigorous and thankless job, they worked close to 12 hours each day. 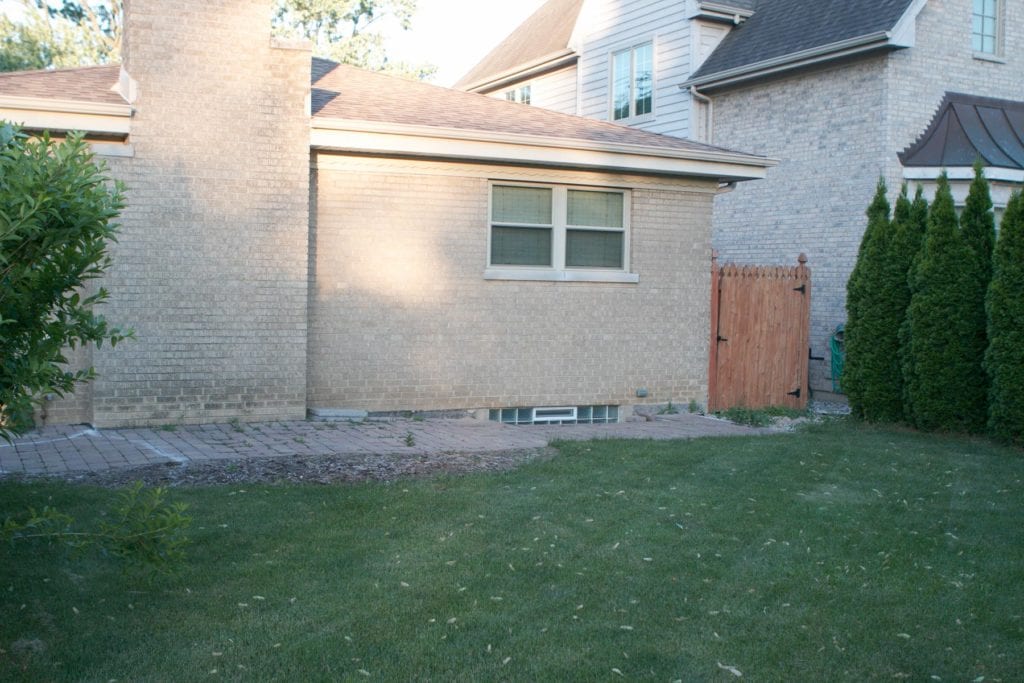 Right when they arrived, we reviewed the plans and spray painted the shape of the future patio. We ironed out any changes so we were all on the same page to kick off the week. 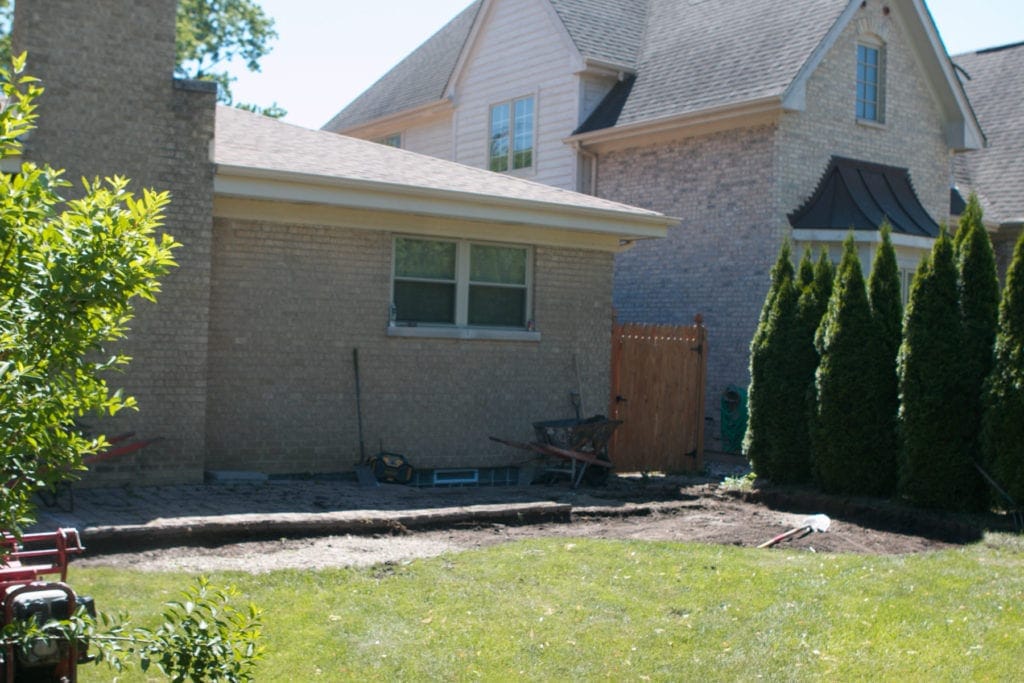 Then they got to work ripping everything out. The original patio, the “walkway” by the mudroom door, and all of the landscaping was all gone after the first day. 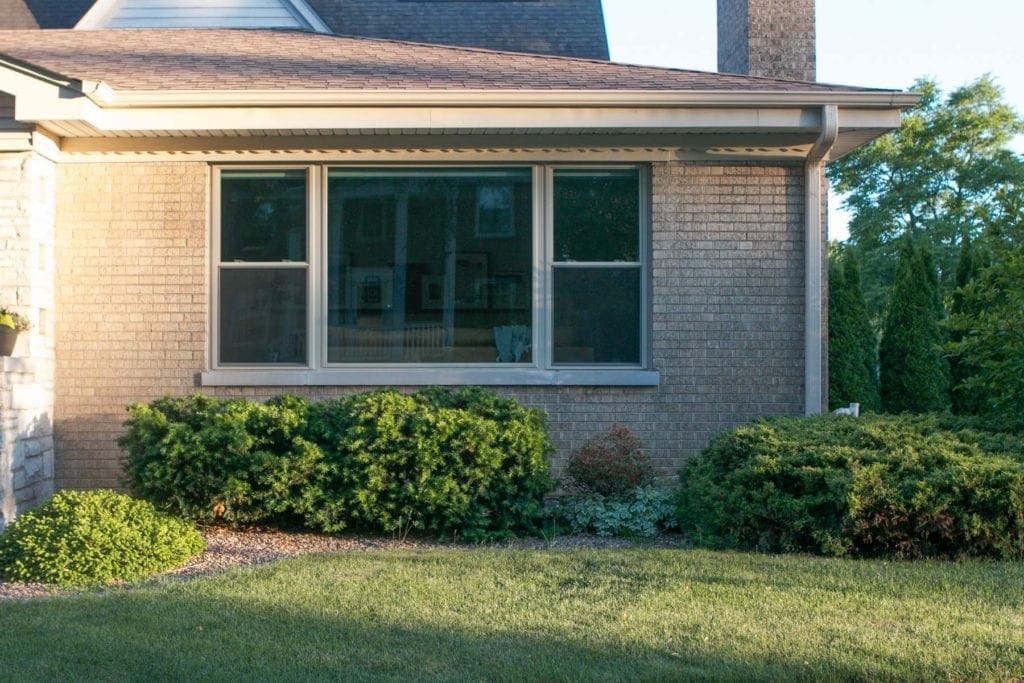 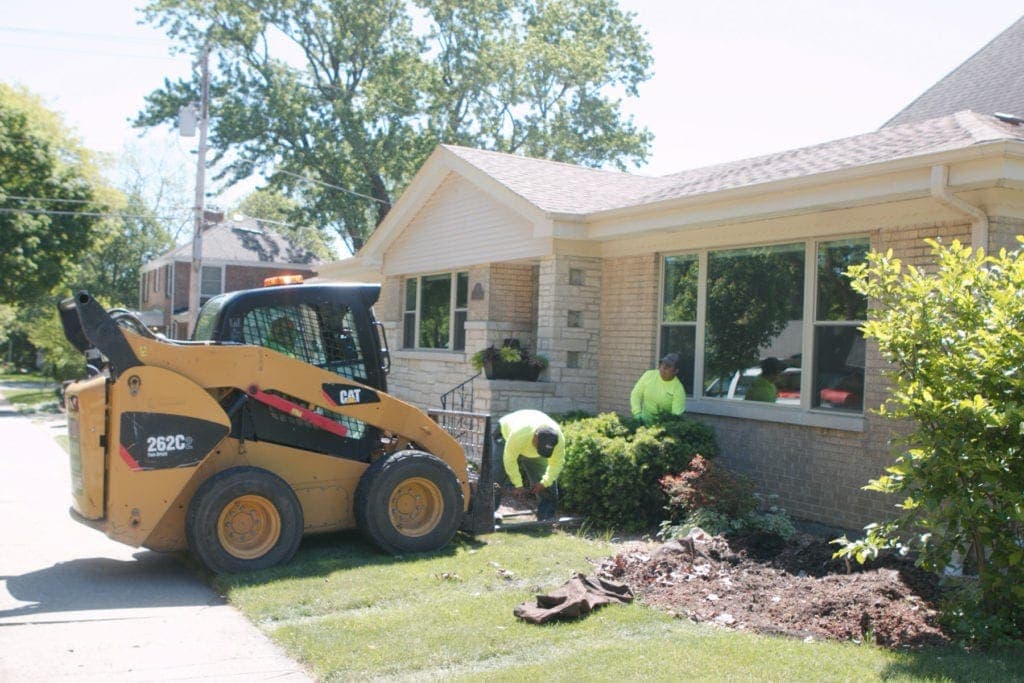 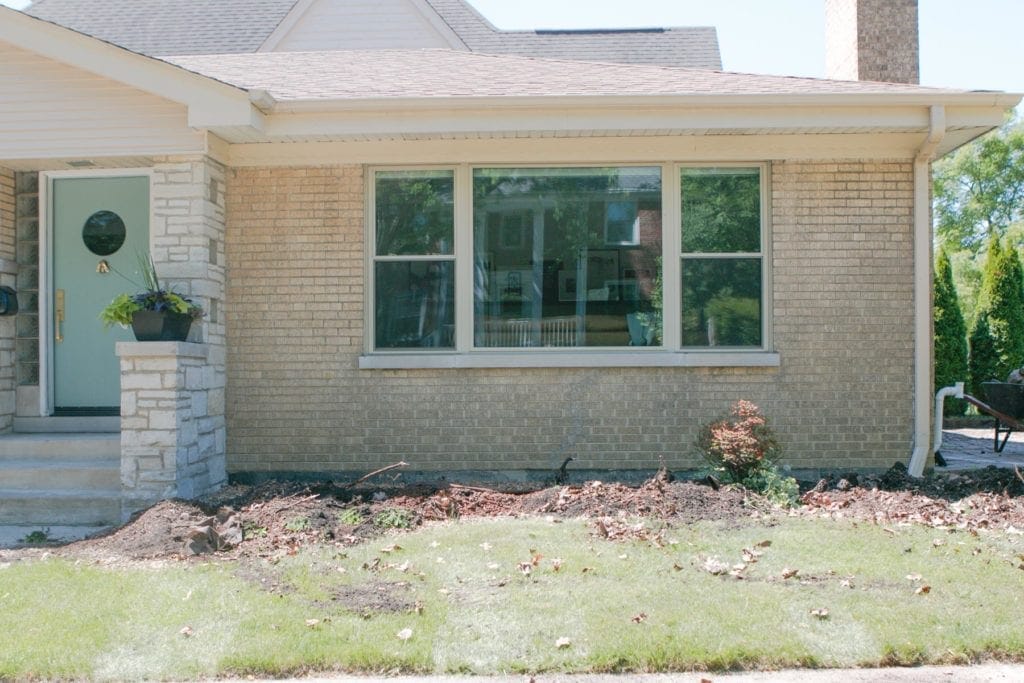 On Tuesday, the two-man team started reconstructing the walkway by the mudroom. I didn’t realize how bad the old walkway was until I saw how GOOD the new one was. 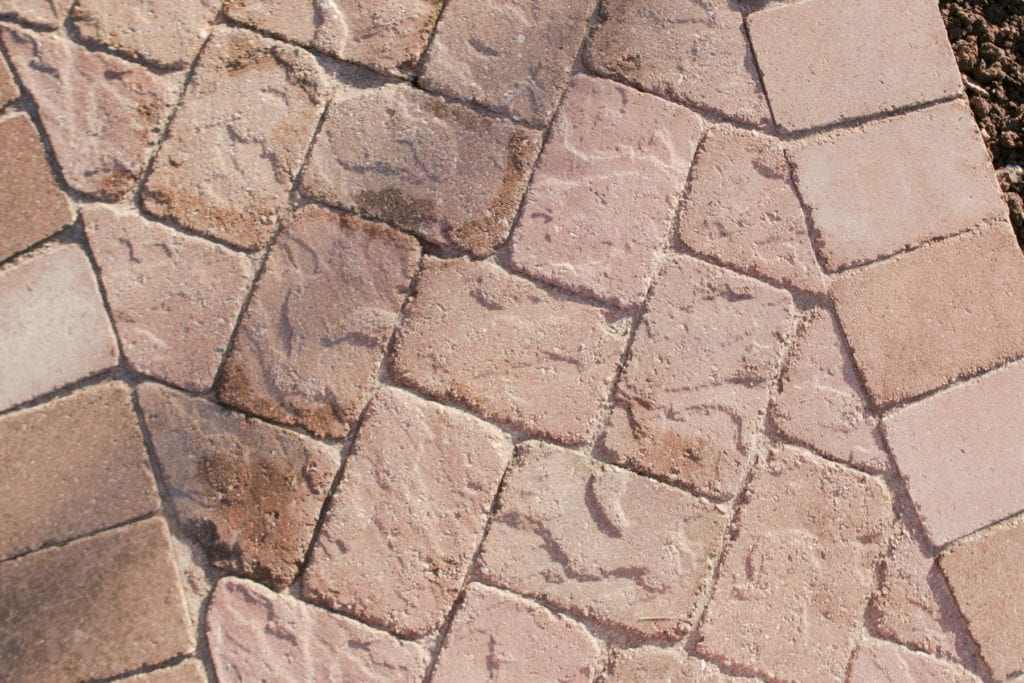 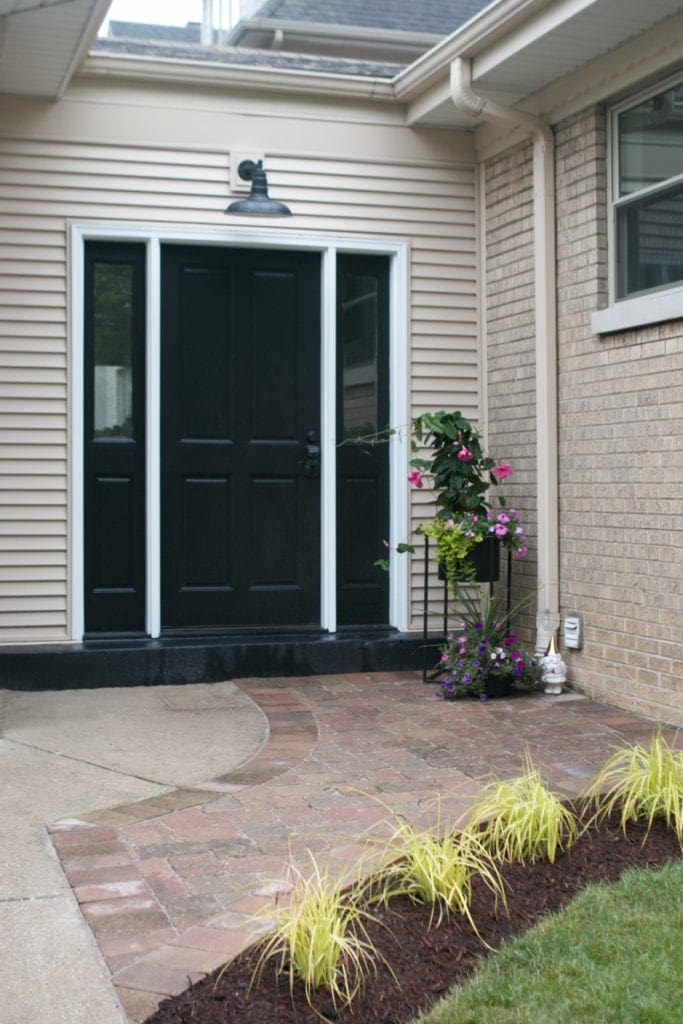 To cut down on costs, we used the brick that was there along with some of the patio brick that was being thrown away. I can’t believe how much better the shape, style, and overall durability is now. I’m obsessed.

The rest of the day was “cleaning up” the dirt out in front of the house and grading the old patio so the water will finally run away from the house instead of toward our house. 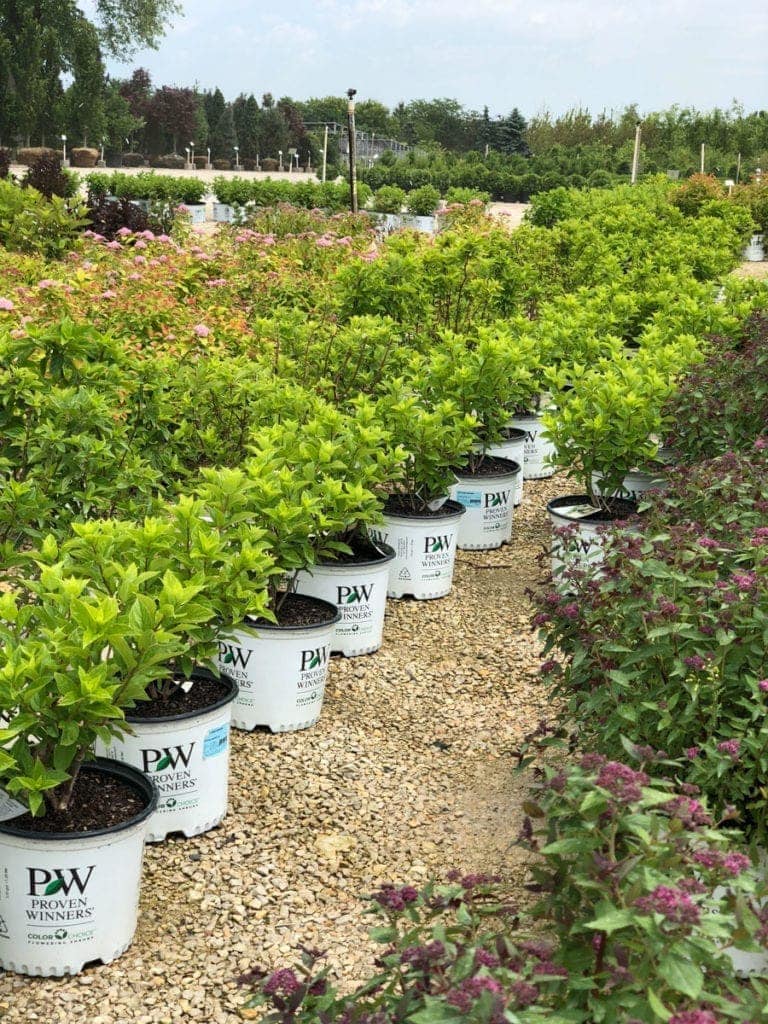 Meanwhile, I met the project manager at a huge nursery where we hand-picked all of the plants. We already had a list of specific plants we wanted, but he wanted me to come with him just in case there were any plants I didn’t love in person. I’m so glad that he did because we did end up ditching a few plants we originally had planned and substituted them for other ones we thought would work better. (More details on which plants we chose later in this post) 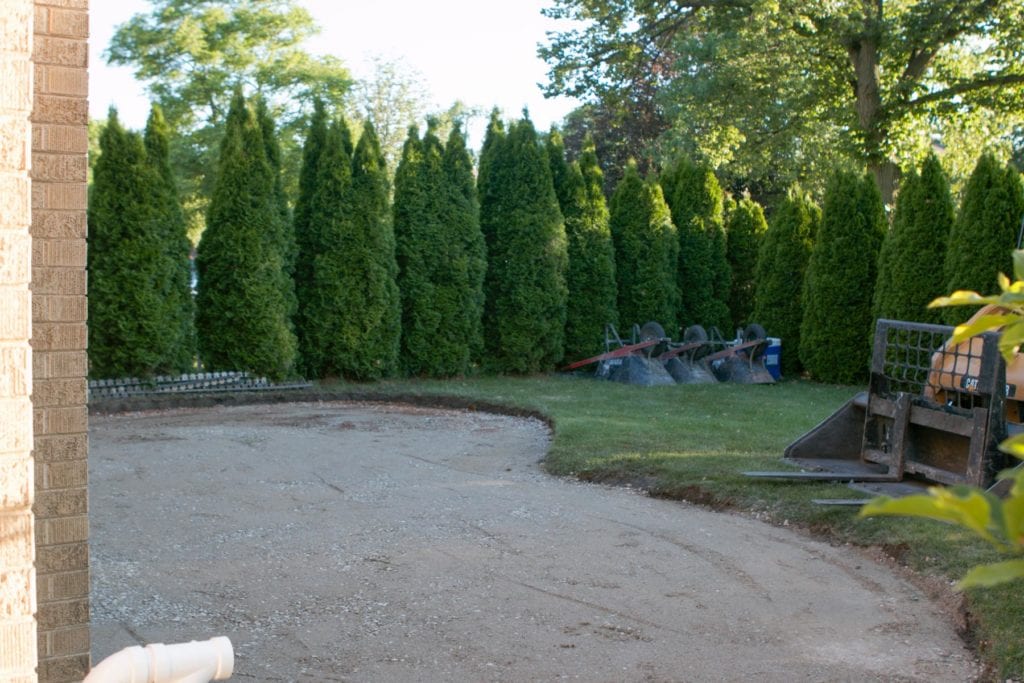 On Wednesday it was patio time! The team started by building the “half-wall” that now hides our huge (and dangerous) window well. Like I originally mentioned, this window well is super wide and could definitely swallow up a small child or even an adult that’s not paying attention.

So making that situation a little “safer” was top on our priority list. The landscapers used paver bricks to build up around it and then cemented it in place. I eventually plan to put plants or something on there, but for now, I’m just happy the window is blocked off. Plus, this wall didn’t obstruct the sunlight in the basement bedroom nearly as much as I anticipated. #winwin 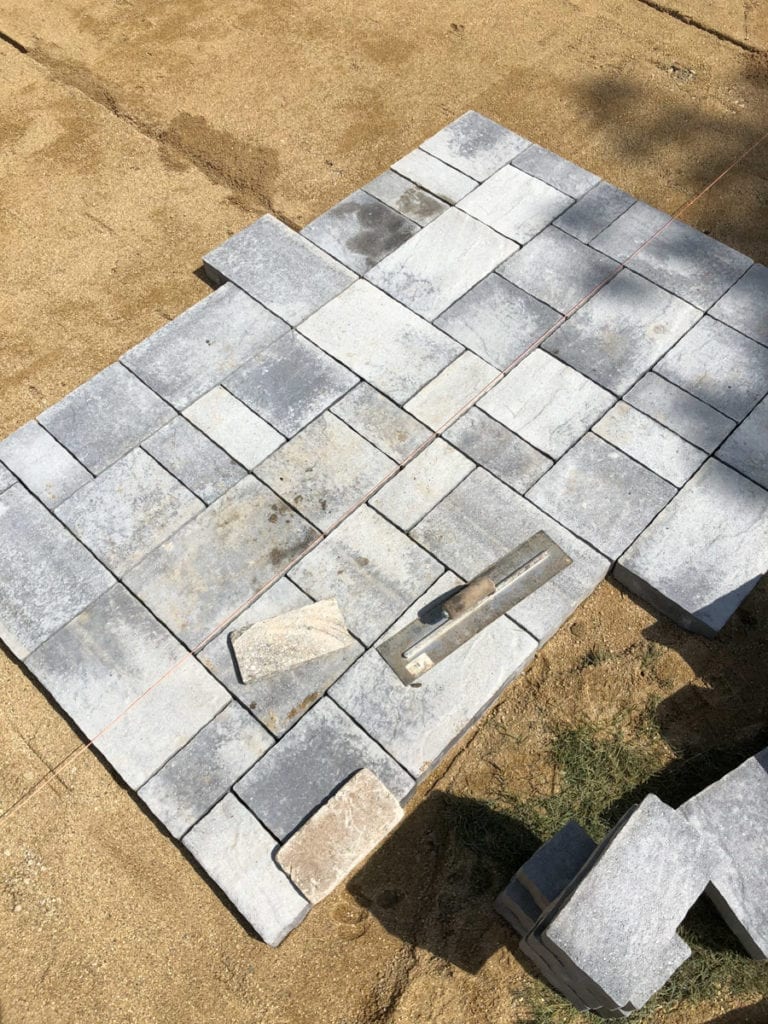 After that, the team started laying the patio pavers and I thought to myself, “something doesn’t seem right”. I loved the brick, but it didn’t seem like the color I chose and I personally didn’t think it looked great next to our blonde brick on the house.

But I had picked it out months ago, from a tiny magazine photo, and figured I’d have to live with it… so I didn’t say anything. 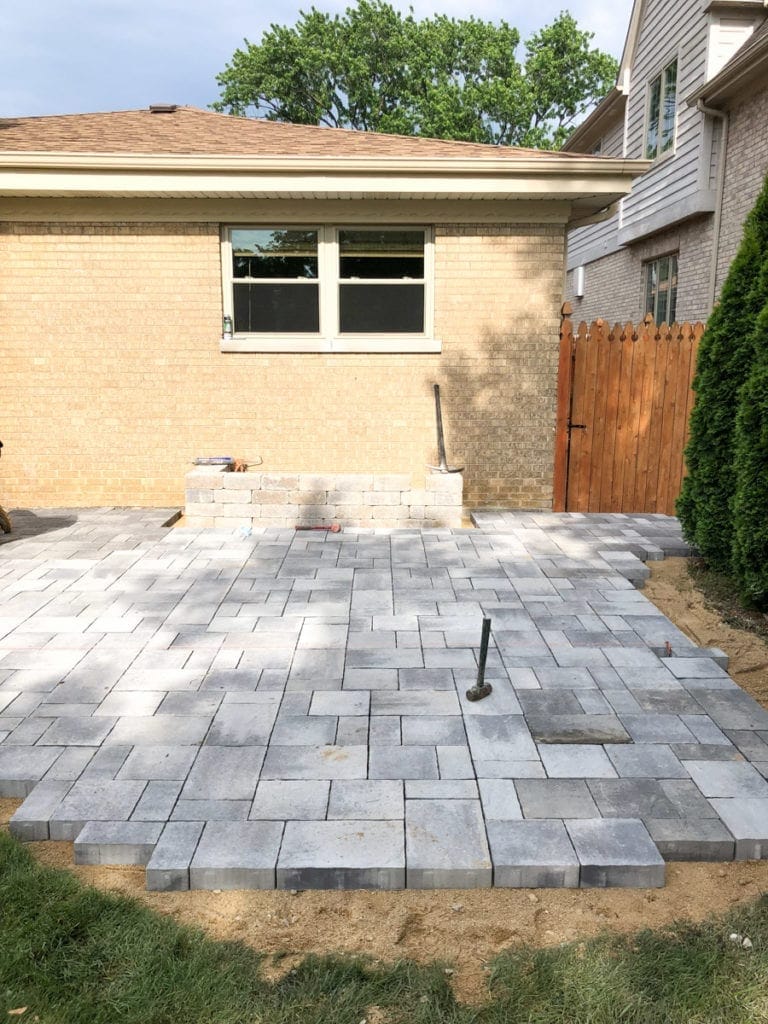 Matt came home later that evening, and I mentioned that the brick seemed different than the color I chose and he  made me call and verify the color with the project manager that night. So I did, and we realized that they accidentally laid down the WRONG BRICK! I felt awful that I didn’t say anything sooner, but didn’t want to be difficult.

They were so apologetic and reassured me that they would start over the next day, but again, I felt so bad that I waited so long to speak up and now they had a lot more work to do.

Patio… take 2! The guys worked to pick up the original bricks and lay down the new bricks in their place. 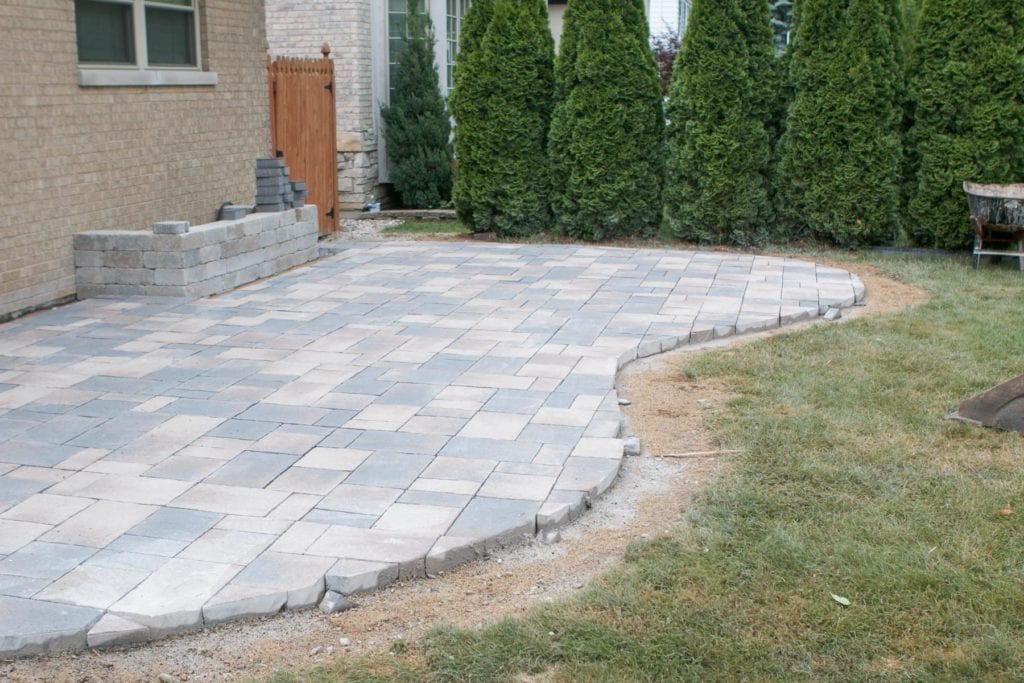 Later that day, we were left with an almost finished patio that matched our house a whole lot better. In all honesty, the first brick is more my style but just didn’t mesh as well with our yellow brick house. If my house was a different color, I would have definitely preferred the light gray bricks but since it’s not… the multi-colored bricks it is. 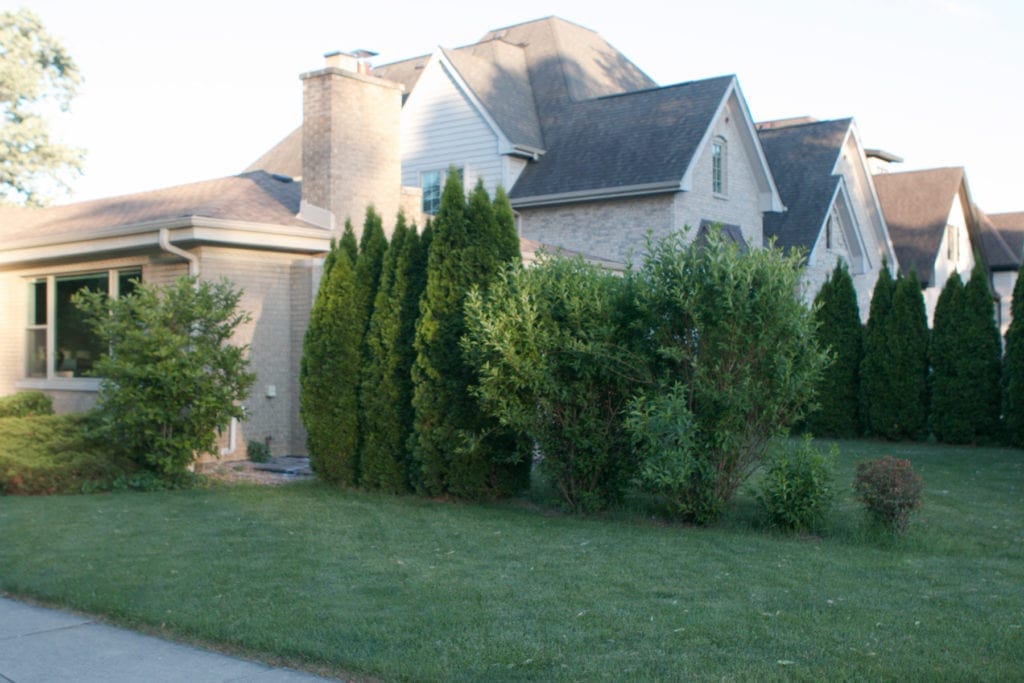 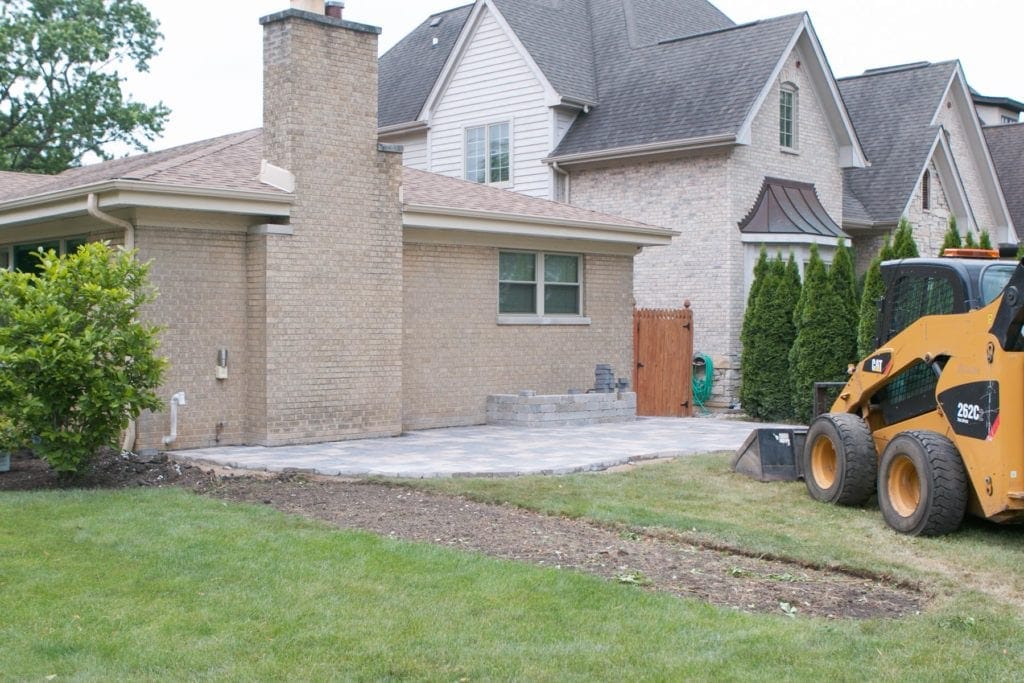 By the end of the day, they also pulled out a few of the trees to open up the space. I originally wanted to take down all of the trees but after more careful consideration, I decided to keep the corner of trees on the ground. 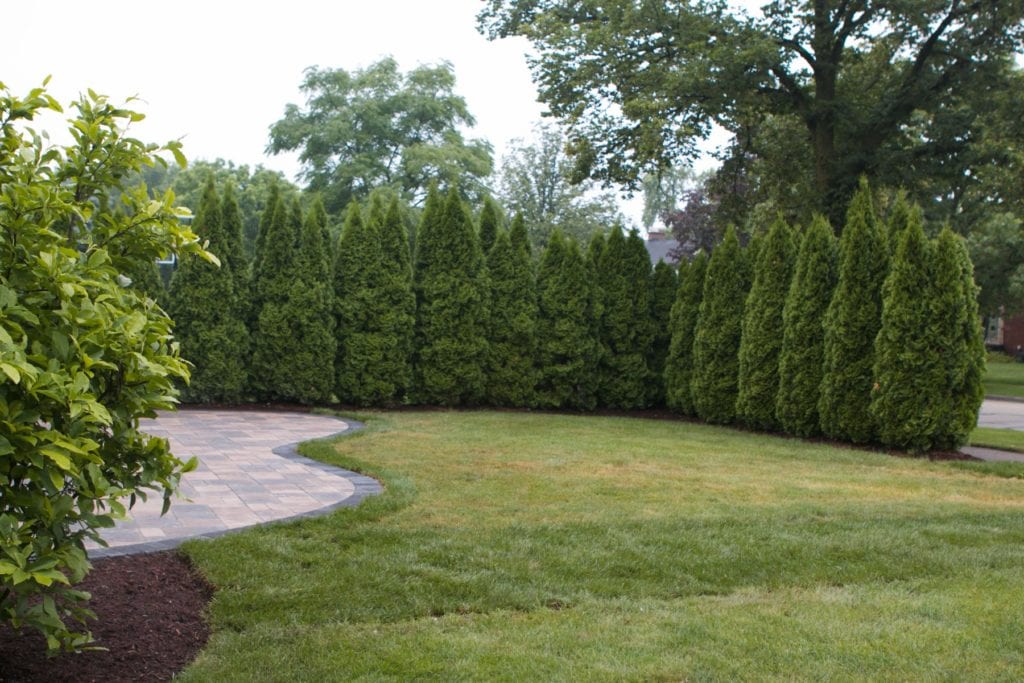 Since we live on a corner with no fence, my hope is that the trees will help corral Ben when he’s eventually moving around, provide some much-needed shade and hide some of his “kiddie” toys that will eventually live in our yard. But taking down some of the trees opened up our yard a lot more and gave us some more space to enjoy!

On Friday, the team put the finishing touches on the patio (like adding the black border!). They also filled in the cracks and added sod around the border. 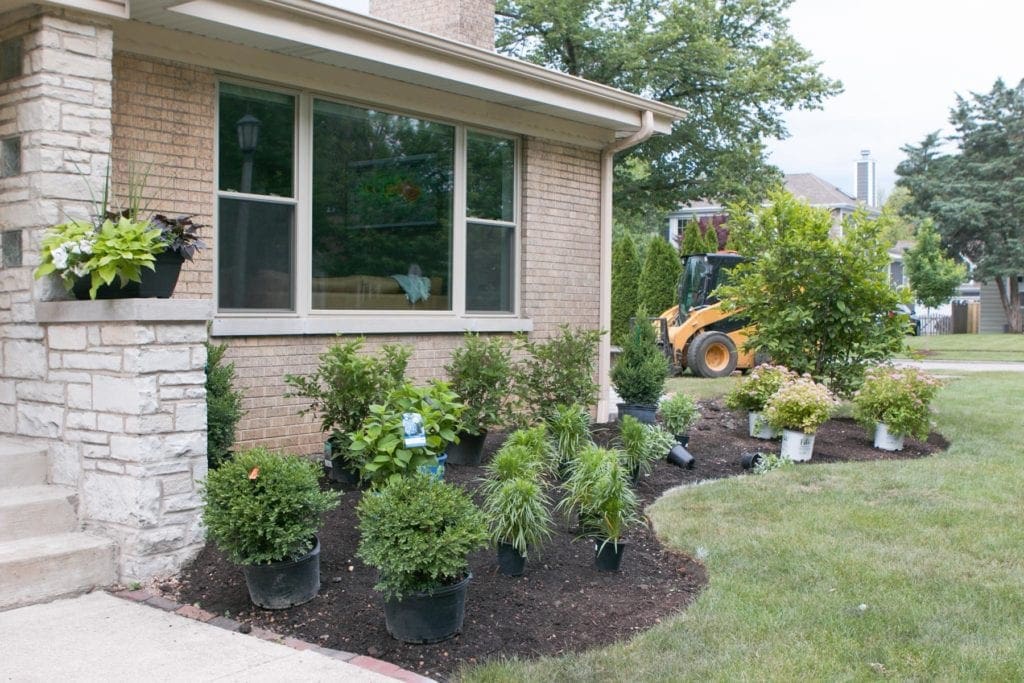 Right now the plants all look very green, but I’m excited for each of them to bloom at different times throughout the spring/summer. Bring on the color! 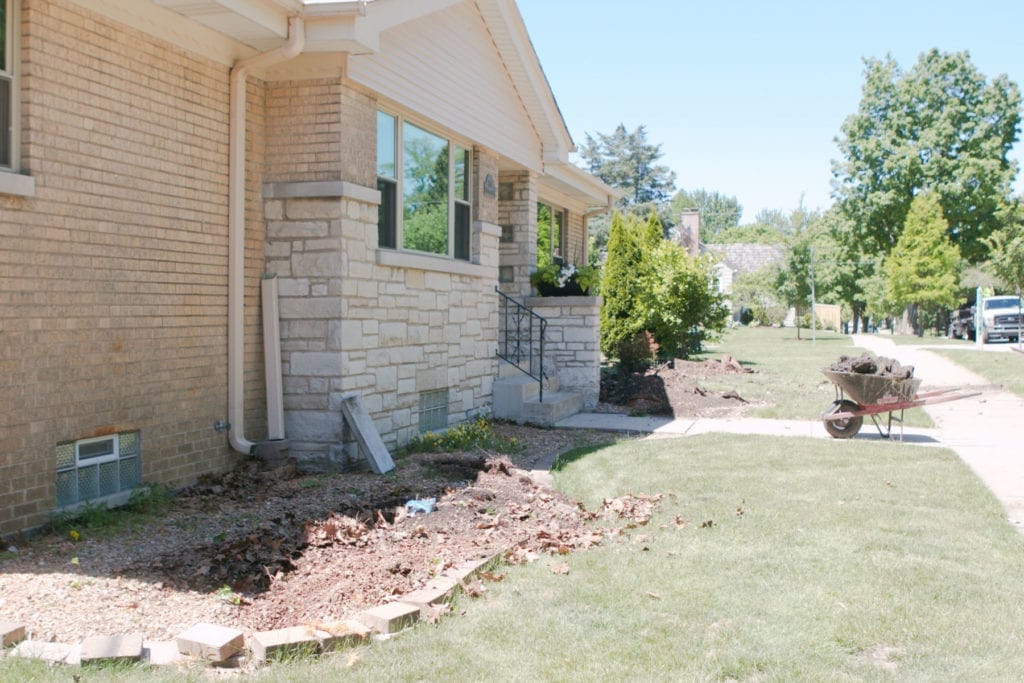 Seeing SO much progress in such a short period of time has me EXTRA motivated to check-off the remaining items on our to-do list. BUT before I get to work on those, I have to address some behind-the-scenes details in honor of keeping it real. 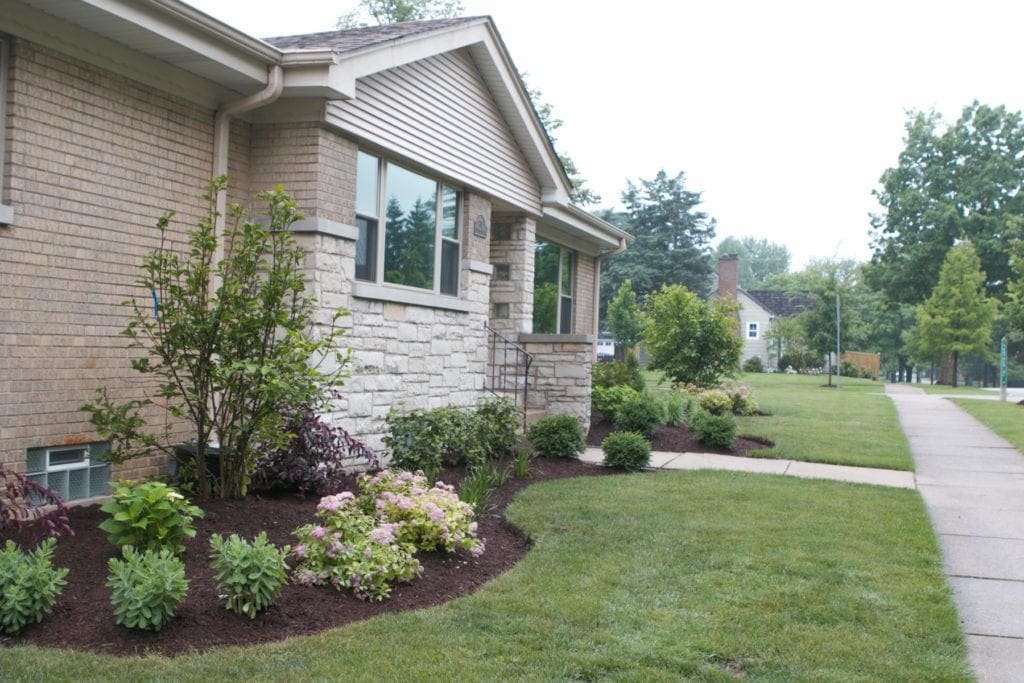 A lot of you reached out in awe at how much we have gotten done… already. And I could not agree more. I was expecting this list to take us ALL summer and am also pretty shocked that we’re this far along so quickly.

But please know that this has been a team effort and I could have never gotten this far alone. What you don’t see on instaStories or on my to-do list is how much help I’ve gotten from my amazing parents. They have spent so much time here with me to help paint, plant, water, clean, and entertain Ben. They are the most hardworking people I know and I’m so lucky to have them on my team. 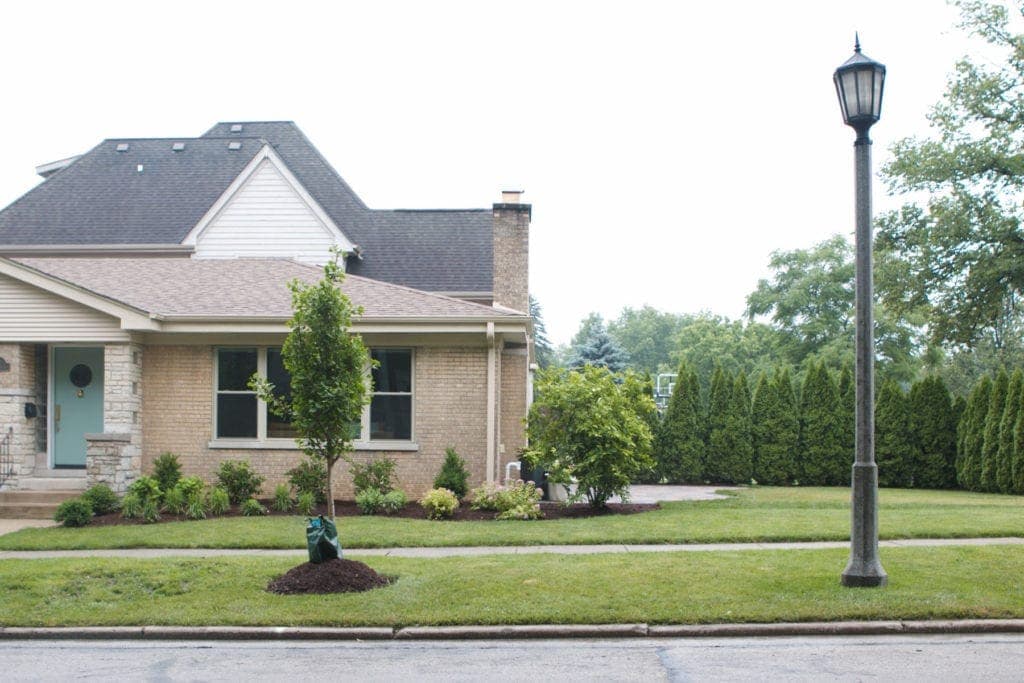 Bottom line– don’t be fooled into thinking I’m a one-man show “juggling it all”. Between a whole landscaping team and FOUR adults working our asses off, that’s how we’ve made such a dent in this list. And the best news is, they’re still on board to power through these last few items, so stay tuned for more progress soon!

P.S. I’m planning one more landscaping update (before I dive into details on our patio furniture plans, which I still have to make). If you have any specific questions about the patio, landscaping, process, plants, etc., leave it in the survey below. I will be sure to answer as many as I can next time I check in.