Renovation Progress on Our #FinnFixerUpper

Our renovation officially started on May 28th and it has been nonstop action at our #FinnFixerUpper ever since. My contractor and his team are working hard and every time I go over there I never know what I’m going to find. Sometimes I don’t even know if I can walk in the door because I might take one step and put my foot through a floorboard (no joke!). While I’ve been trying my best to share renovation progress in real time on Insta stories (you can find it under the “FinnFixerUpper” highlight reel), I wanted to share more details here on the blog.

Renovation Progress at Our New House I’ve gotten a lot of questions about budgeting for a renovation of this size and I’m actually dedicating an entire blog post to this topic next week. Since Finn is the finance whiz in the family, he will be spearheading that post and I’m eager for him to share his knowledge. We’ll be sharing numbers and a breakdown of our renovation budget.

But back to the action, here are some of the things that have been happening… The biggest (and most expensive) part of our renovation is the new flooring. Our old hardwoods were in bad shape and sadly we weren’t able to salvage them. Instead, we had our contractor rip everything out on both floors of the home and we’re replacing them with new. You can read more about our new flooring in this blog post. 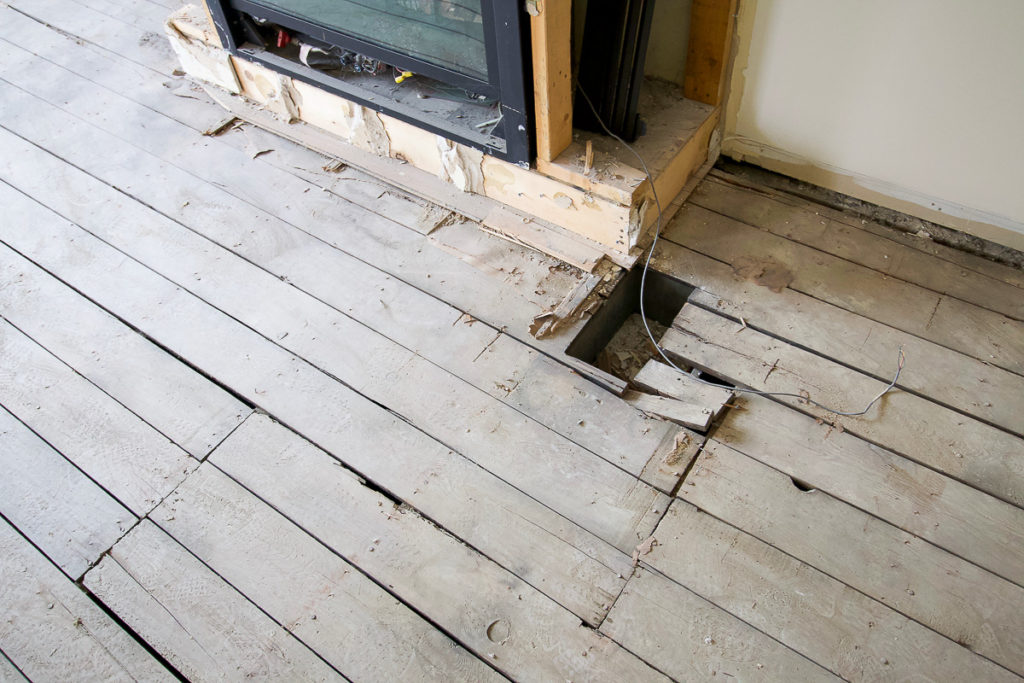 They ripped out all of the flooring in the first week and it moved really quickly. But that next week, I got a call from my contractor. Whenever his name pops up on my phone I get a little sick to my stomach. It’s not because I don’t like him (he is great), but it’s because I’m nervous that something is going wrong at the house. In this instance, he was calling to talk about the state of the floorboards underneath the old hardwoods. Since our home was built in 1921, the floorboards were in terrible shape.  They were weak in some spots, had holes in other spots, and they were not a good foundation for new flooring. He suggested replacing the old floorboards with plywood in order to make a safe and stable surface for the new hardwoods. That came with an $1,800 price tag for labor and materials, but it was well worth it in our eyes to have a strong base for the new flooring that had already cost us a boatload. Above is what it looks like with the old floorboards ripped out. That’s the ceiling of the basement that you can see. So crazy! You guys urged me to save some of the 100-year-old floorboards for a future project and I did just that! They’re now in our garage, which is already full of stuff,  just waiting to be used in a project someday. The kitchen and second floor were added onto the house later, so plywood was under those old floors. This area was all in good shape, so luckily we didn’t have to do any additional work there.

During that first week of demo, I had to choose the millwork for the new home. I wasn’t anticipating having to choose so soon, so I was surprised when my contractor provided me with all of the options and I felt a little overwhelmed. But he wanted to get the order for the doors and millwork in right away so it would come in time for installation later this month.

As I mentioned a minute ago, our home was built in 1921 and sadly all of the character has been ripped away from it over the years as it has been remodeled. There isn’t much left to signify that it was once a historic Chicago bungalow with craftsman style millwork. My goal is to add meatier trim and doors to the home to give it more character.

I knew I wanted 3-panel flat shaker doors throughout the home. These were an upgrade (about $190 total per door), but I know that these solid doors will elevate the entire house. Right now, we have hollow doors that are so crappy and replacing them with solid ones is well worth the cost to me. We’re going with white doors, black hinges, and matte black knobs.

I also decided to upgrade to thicker baseboards around the house, opting for the pricier 5 1/4″ option as opposed to a shorter baseboard at 2-3″. While this cost extra, I think it will work much better with the high ceilings we have on the second floor. We’re also doing crown molding in the living room, but not in the other rooms in the home. This helped keep us more on budget and I figure Finn and I can always add crown to rooms as we decorate and finish them. All of the casings around the windows are being replaced with thicker millwork too! During the second week of construction, I walked into the house and instead of walking smack dab into a wall…I could see the entire living room. It was the coolest feeling. Ever since we walked into this home for the first time, I knew that I wanted to remove lots of the walls in the front room to make a larger living room. 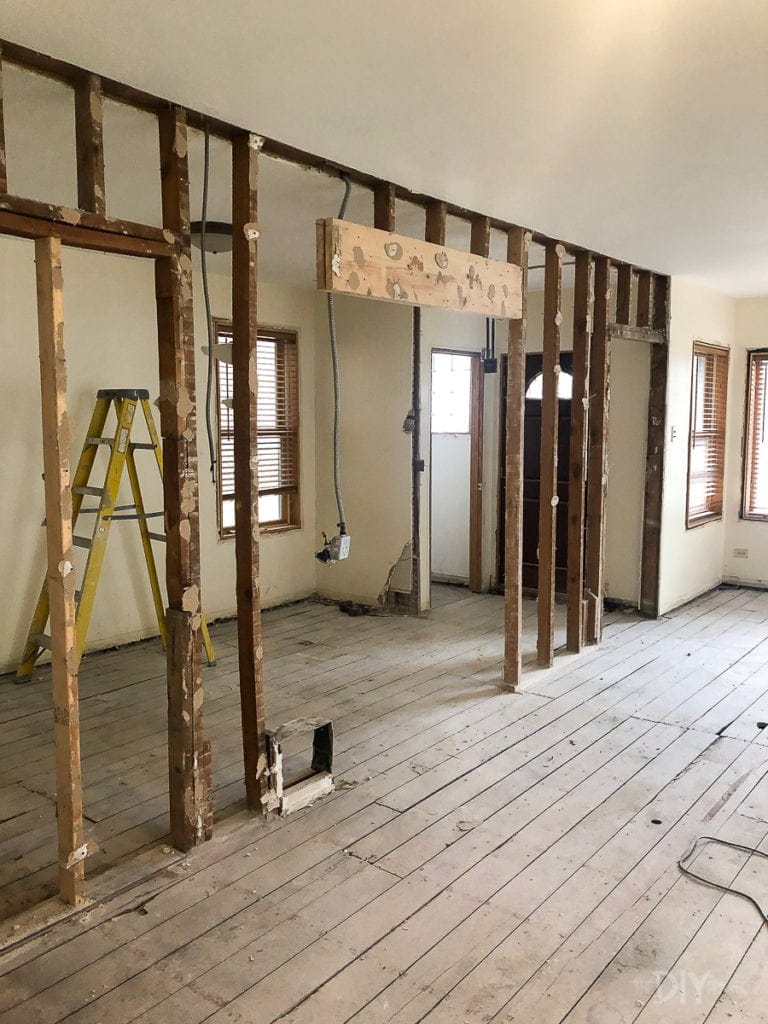 To see the walls down is amazing…the room feels huge! 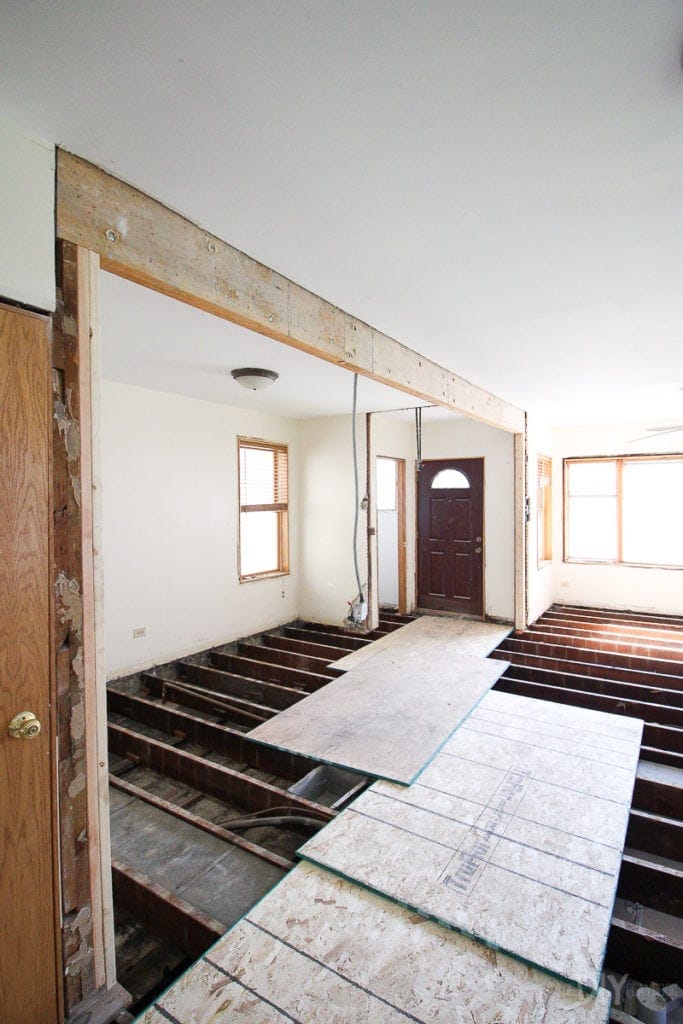 My contractor added a large beam in the living room to support the second floor with those walls down. He said that the entire house was sagging up to six inches (!!!) in the middle of the house and now everything is much more stable. Thank goodness! 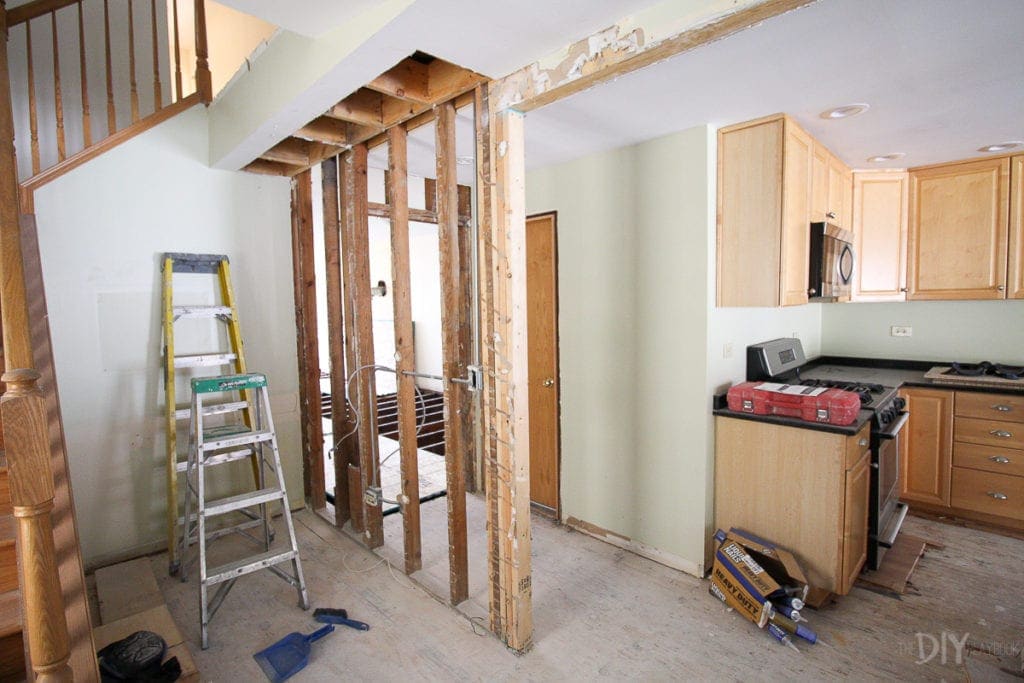 The “office” area in the back is gone too! Those walls are down and the walk from the front of the house to the back now feels much roomier. Sadly, the post in the kitchen has to stay.  The very back of the home was an addition and the post is keeping the master bedroom up…so it’s a tad important. My contractor thought he might be able to remove it, but he thinks this one needs to stay for good. We’re planning to renovate the kitchen in the next year or so and I’ll figure out a way to make the post work with the new design. 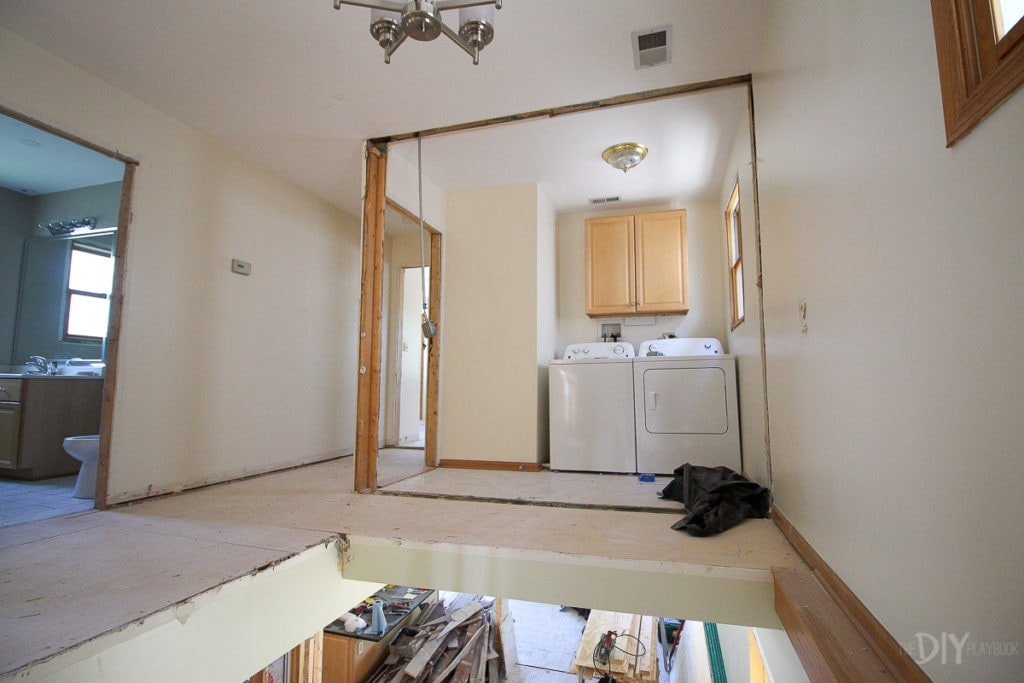 Another exciting development is happening on the second floor. We decided to move the laundry room wall out a few feet so we didn’t have a dead zone between the wall and the railing. The wall is currently down and the laundry room is so spacious already. This was an additional $2,700 (including re-tiling the floor) but it was a project we think is worthwhile to make the most out of the space we’ve been given. 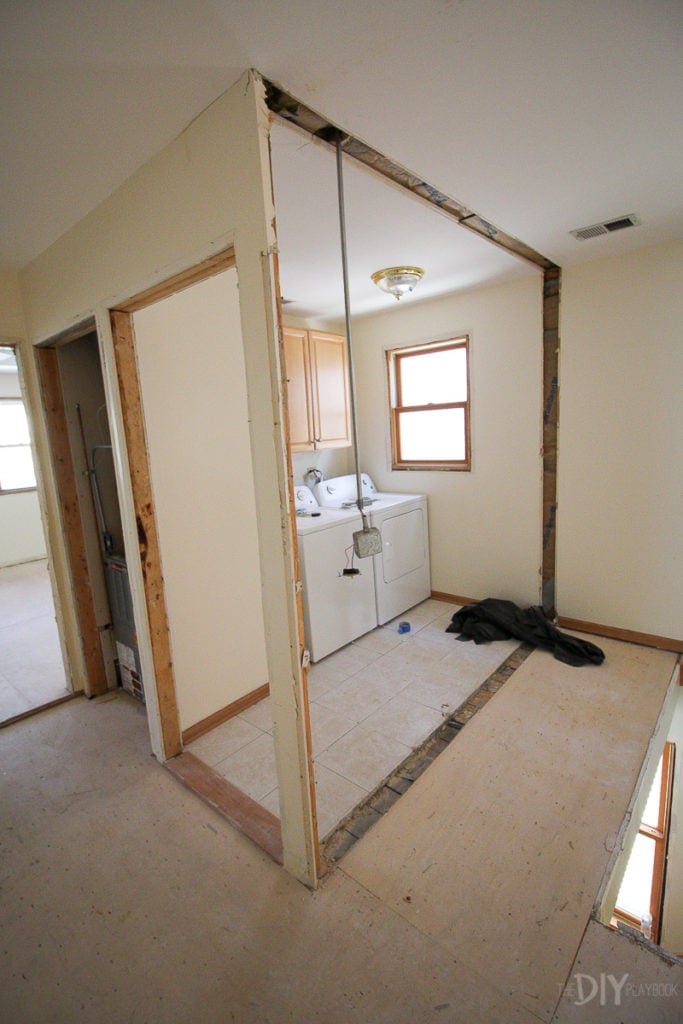 We’ll now have a much larger laundry room and can add cabinets and a folding station. I’m really looking forward to it! Since most of the demo is complete, it’s now time to start to build this home back up! Electrical has just begun and it’s a tad overwhelming. We’re doing recessed cans in all of the ceilings and swapping out all of the outlets and switches for upgraded ones from Legrand. Plus, we decided to add more outlets on the outside of the house (there was only one on the back!) and more to the inside of the house. I’m trying to be really thoughtful and think through the best spots for things, but it’s difficult when we haven’t lived here yet!

I also ordered a few new light fixtures. I figure as long as the electrician is here, I might as well swap out some of the ones that are really looking shabby (which is pretty much everything. ha!). I picked up these inexpensive lights for the back deck, this one for the porch, and I’m adding this chandelier to the stairwell (I’m soooo excited about it!). Oh, and also this fan for the master bedroom and this one for the guest room.

Slowly, but surely, we’re getting there. I’m just excited to see this place start to be built back up since it’s been so many weeks of tearing it down. Soon…very soon!