How to Install Baseboard – Part 1

Thanks to our blog survey last month we received several requests for a specific tutorial on how to replace baseboard. We’ve tackled this project a few times (usually in the process of adding wood treatment to a wall) yet never really thought about sharing the tutorial on this DIY project. 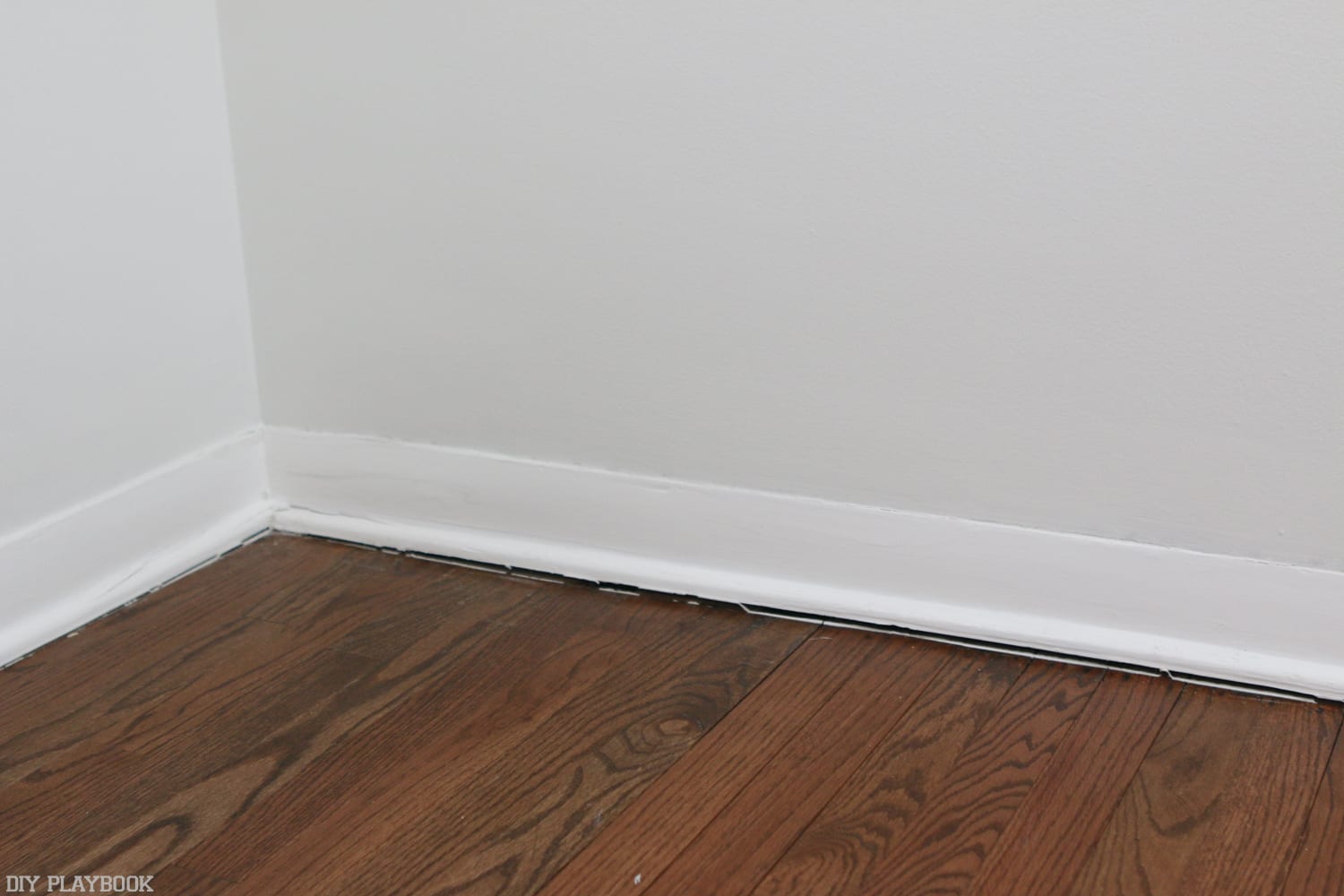 So as obvious as this request seemed, it provided us with a much-needed A-HA moment, which led to today’s tutorial.

Plus this was actually perfect timing because my office really needed new baseboard. I replaced half of the baseboard in this space when I DIY-ed the barn door and am replacing the other half now as I add DIY shiplap to the office (more details on the shiplap coming soon). 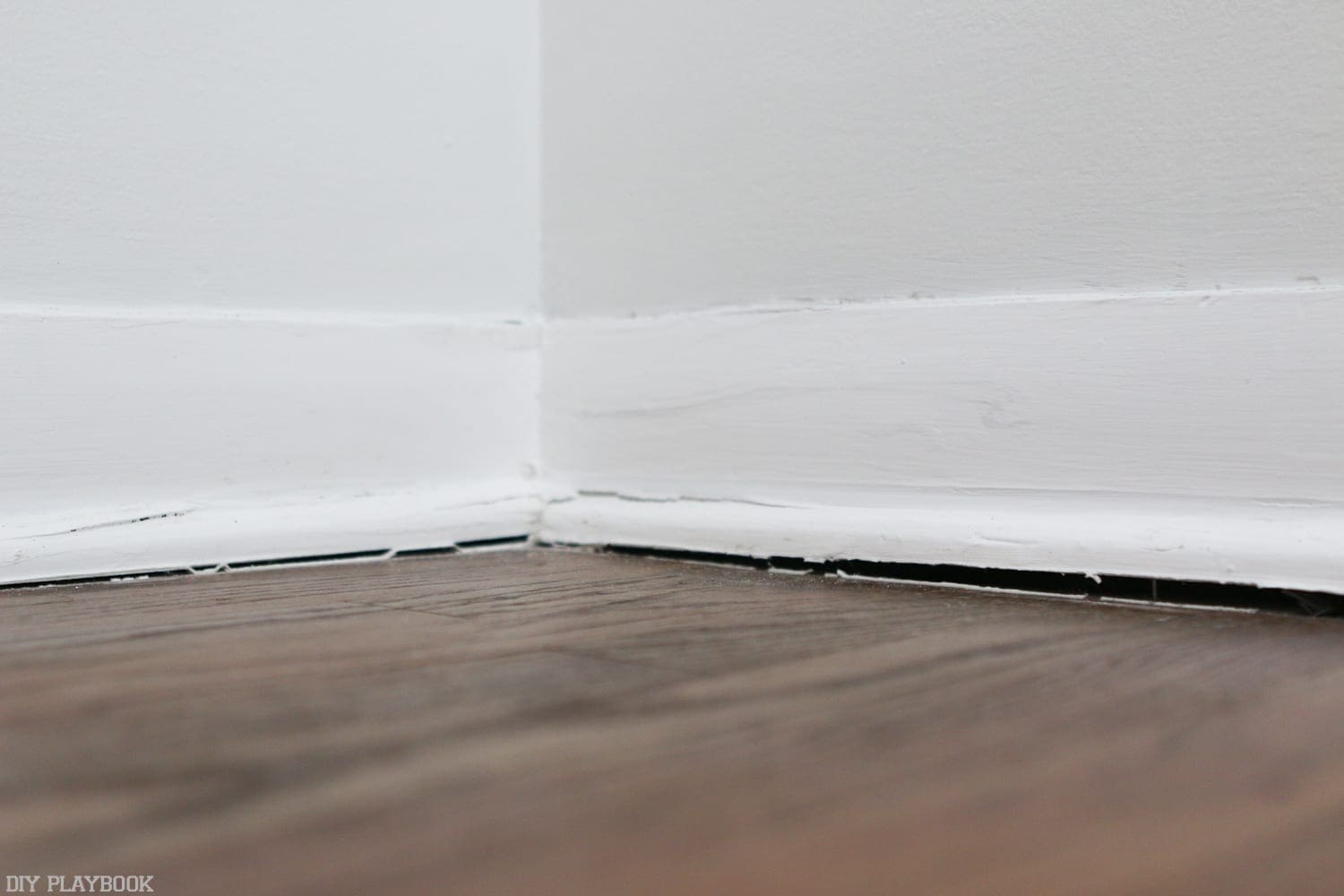 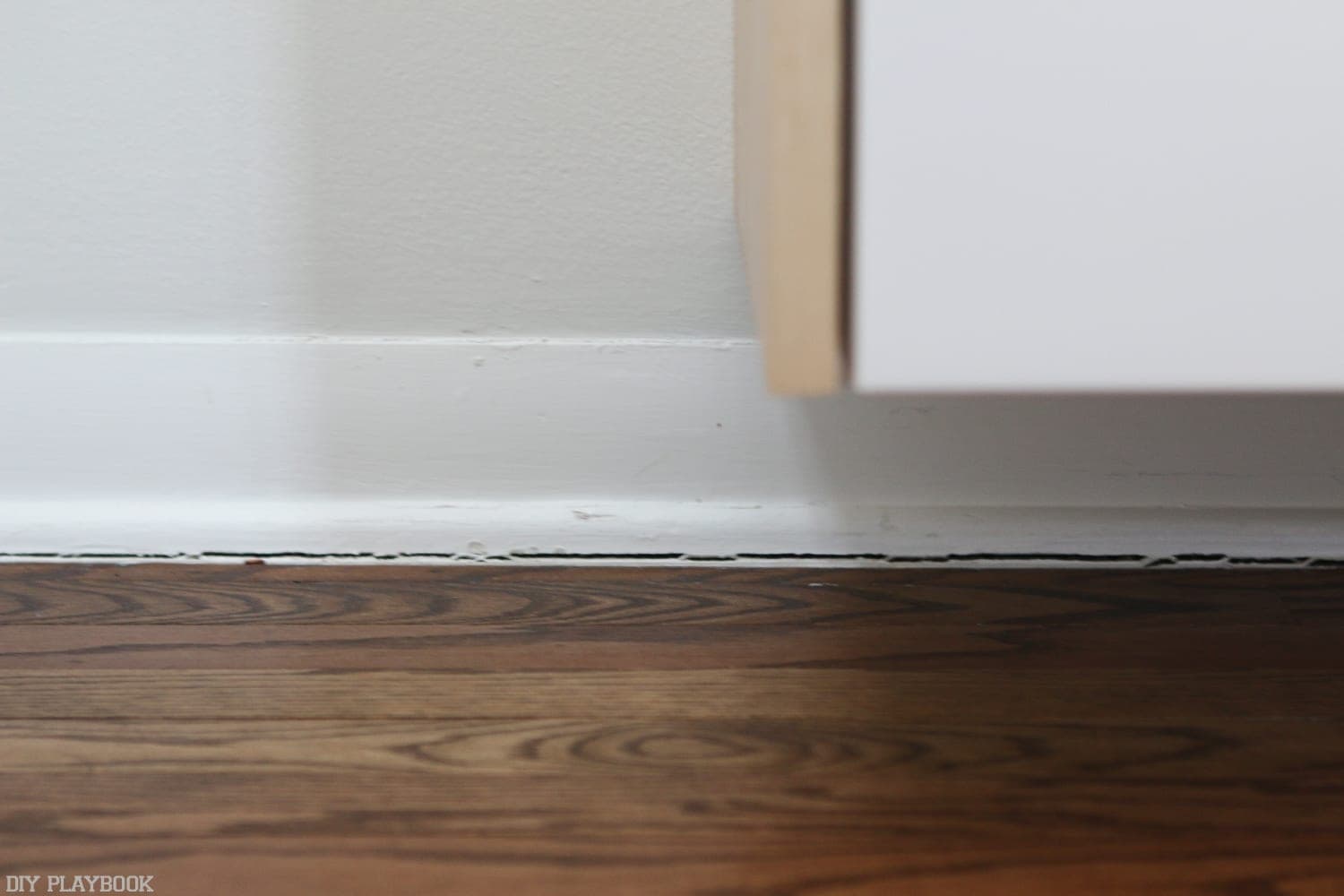 As you can see from the last three photos, the baseboard in my office was a hot mess and in person it looked even worse. I estimate that this baseboard is over 50 years old and has definitely seen better days.

Some of the paint was chipping, the caulk had condensed with the temperature changes, and some of the wood was actually cracking (how does that happen?!). Painting the baseboard or re-caulking it would’ve only provide a band-aid on an open wound, so I decided to replace the baseboard throughout the entire room.

How to Install Baseboard

Today I’m walking you through all of the steps I took to replace my baseboard, which made SUCH a difference in this room. I was intimidated to tackle a baseboard project the first few times I did it, but after breaking down the daunting task into smaller steps, I feel a lot more confident. And although you may not think so, this is definitely a project you can DIY if you know how to work a nail gun and miter saw. Here’s how…

Before you put on the new baseboard you need to take the old stuff off. This step may take a little muscle but if my little muscles can handle this step all alone, I KNOW that you can do this too. Along with some serious muscle you’ll need a hammer and a pry bar to remove the old baseboard. Simply hammer the pry bar behind the top of the baseboard and pull it toward you (away from the wall). 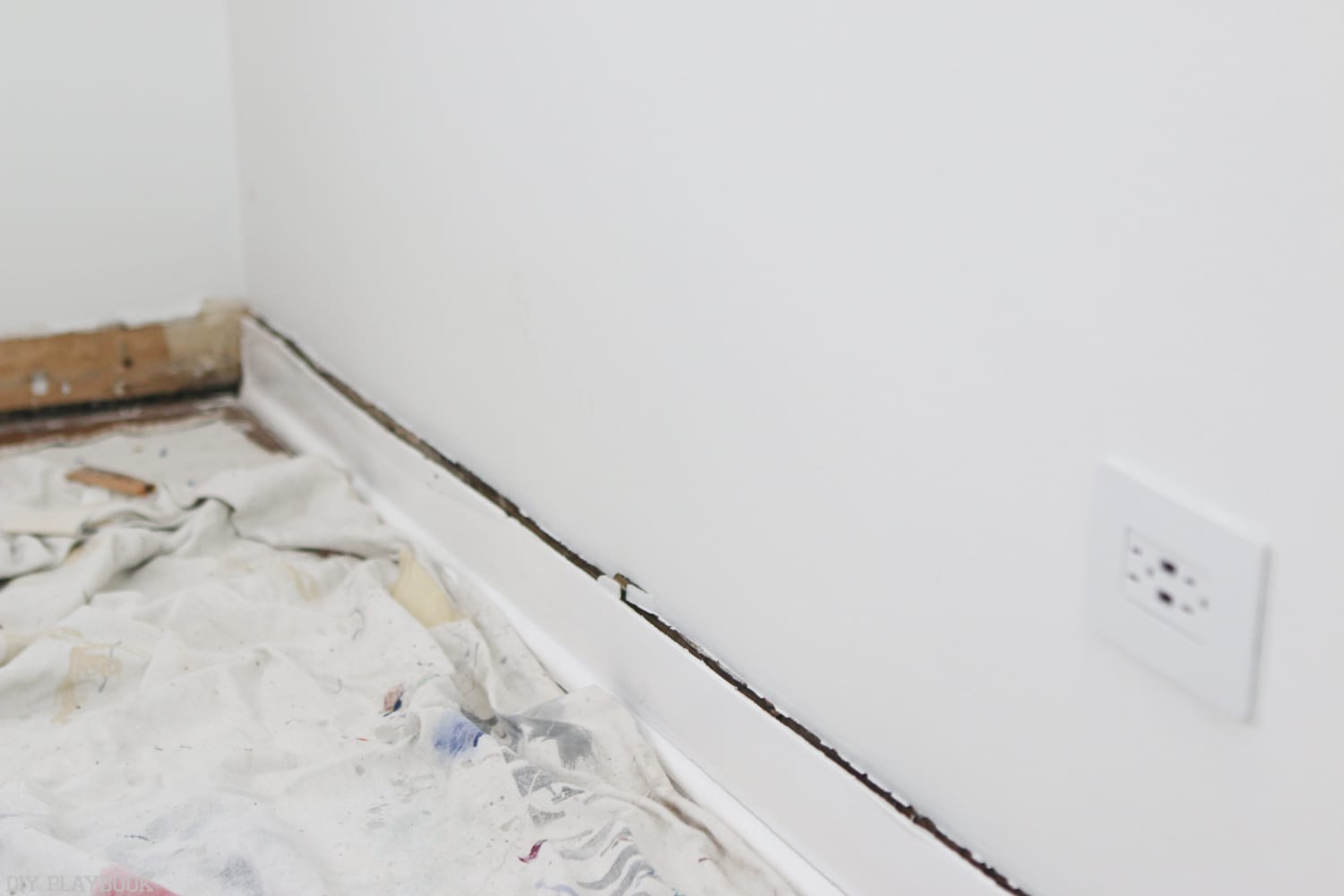 Repeat this step over and over again along the entire baseboard until the whole piece of baseboard can be pulled away from the wall. 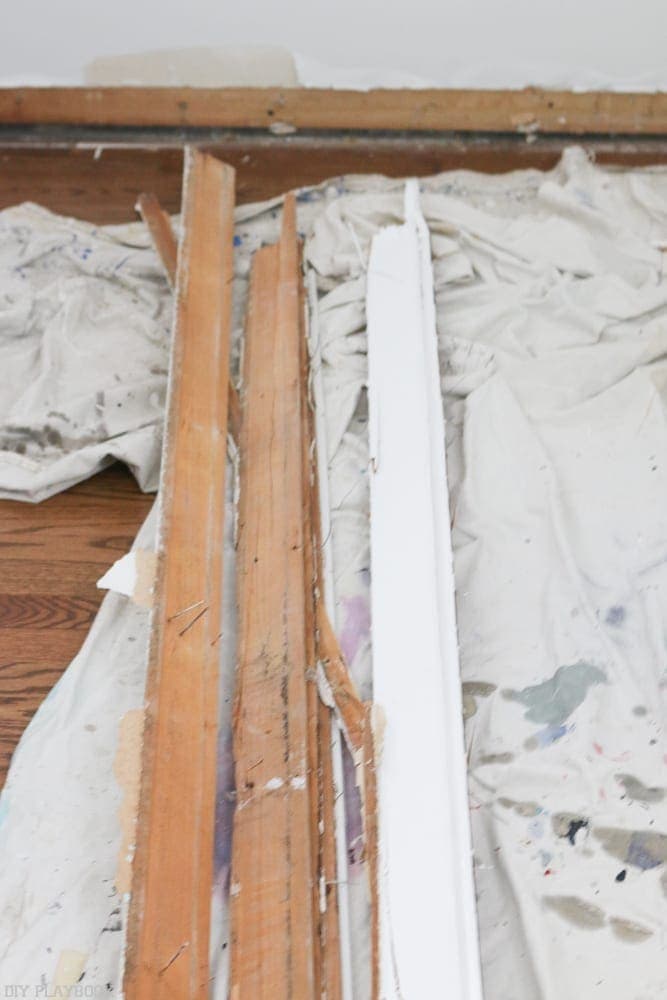 Repeat this step around the entire perimeter of the room until all of the old baseboard is off. 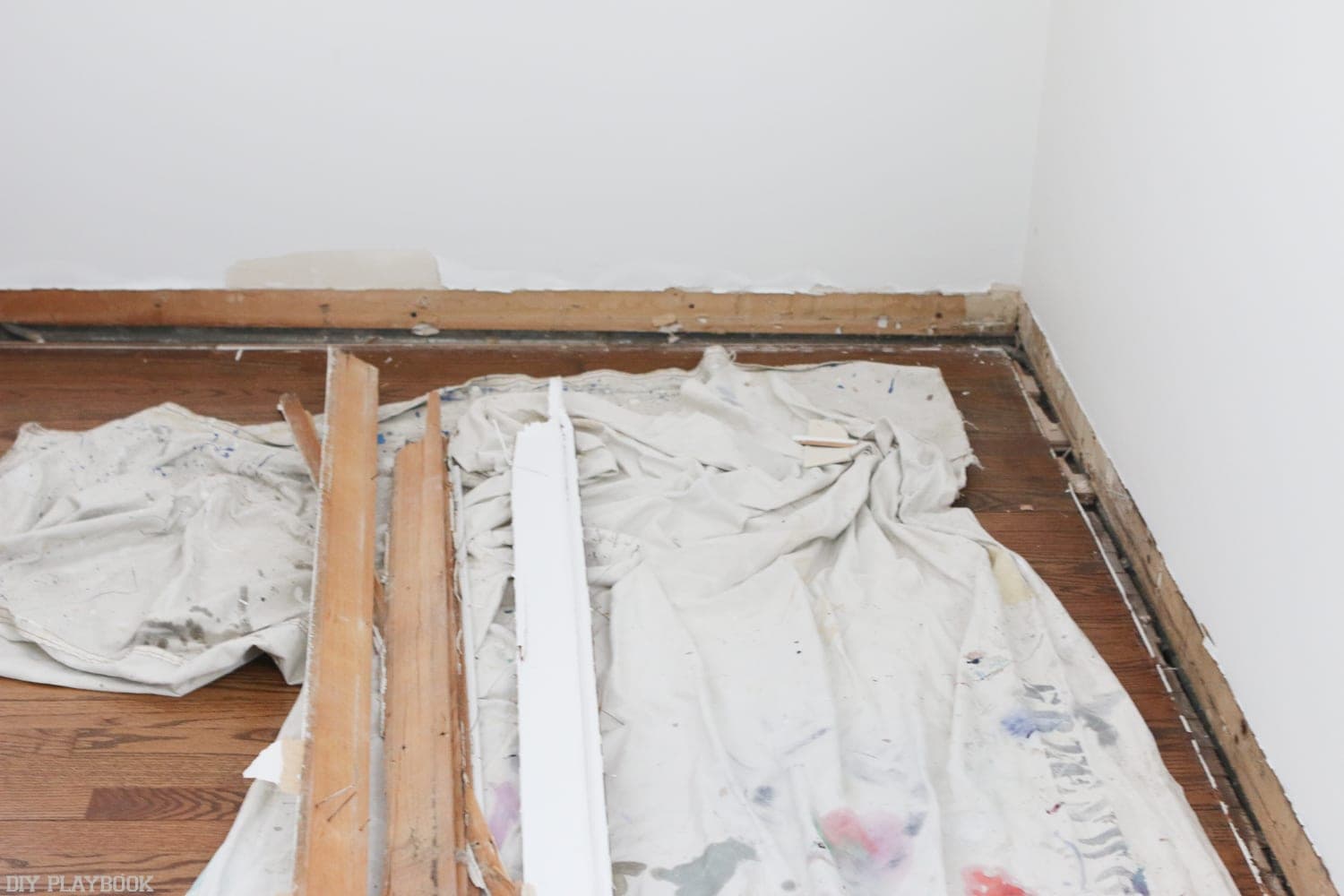 Rookie Tip: Some of the old pieces you rip off may be way too big to stick into an average garbage can. I usually cut these old pieces down using the miter saw so that I can throw the scraps right into the regular garbage cans, but be careful! The old nails that may be sticking out of the wood can be hazardous. <— wear gloves! 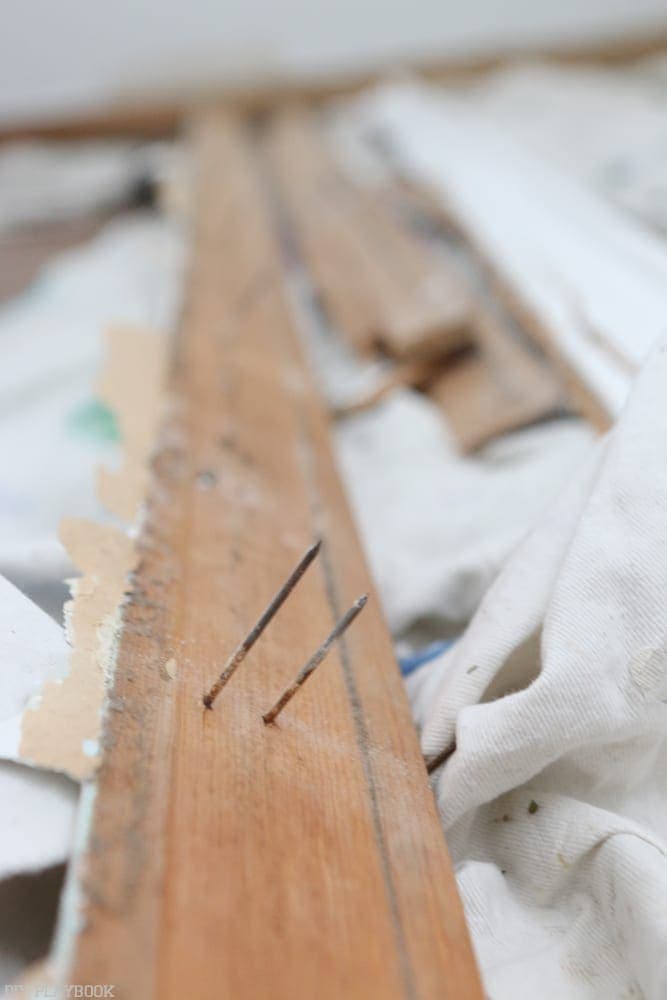 When you pull the baseboard away from the wall there will most likely be nails that are sticking out of the baseboard, as well as out of the wall. The nails in the old baseboard are no problem as long as you handle the wood carefully. But the nails remaining in the wall need to be removed before you can eventually add the new baseboard. This step isn’t difficult, it just requires some patience and a little more muscle. I typically use a pair of needle nose pliers and pluck the nails out of the wall until they’re all gone.

Once the nails are out of the wall it’s time to scrape away the old caulk from both the wall and the floor. 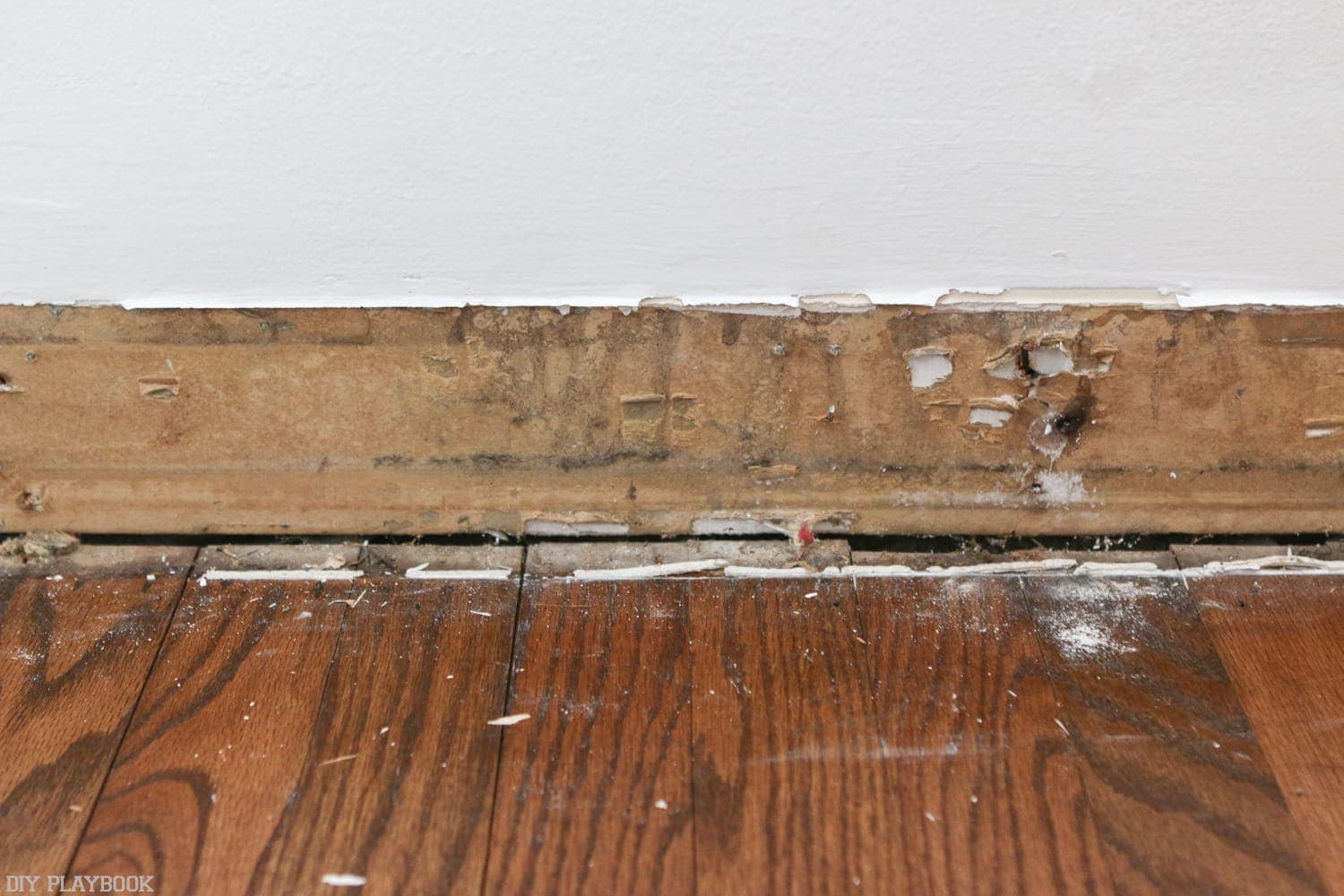 Any size scraper will work for this step along with… you guessed it…more muscle! This photo shows the old caulk removed from the floor, but it also shows that the wall is in need of some more scraping. After getting up all the old caulk on the floor, make sure you scrape the seam on the wall where old caulk or paint has built up. Getting that layer of extra paint/caulk is important to remove, so you’re left with a flat wall surface that you’ll eventually patch and repaint. 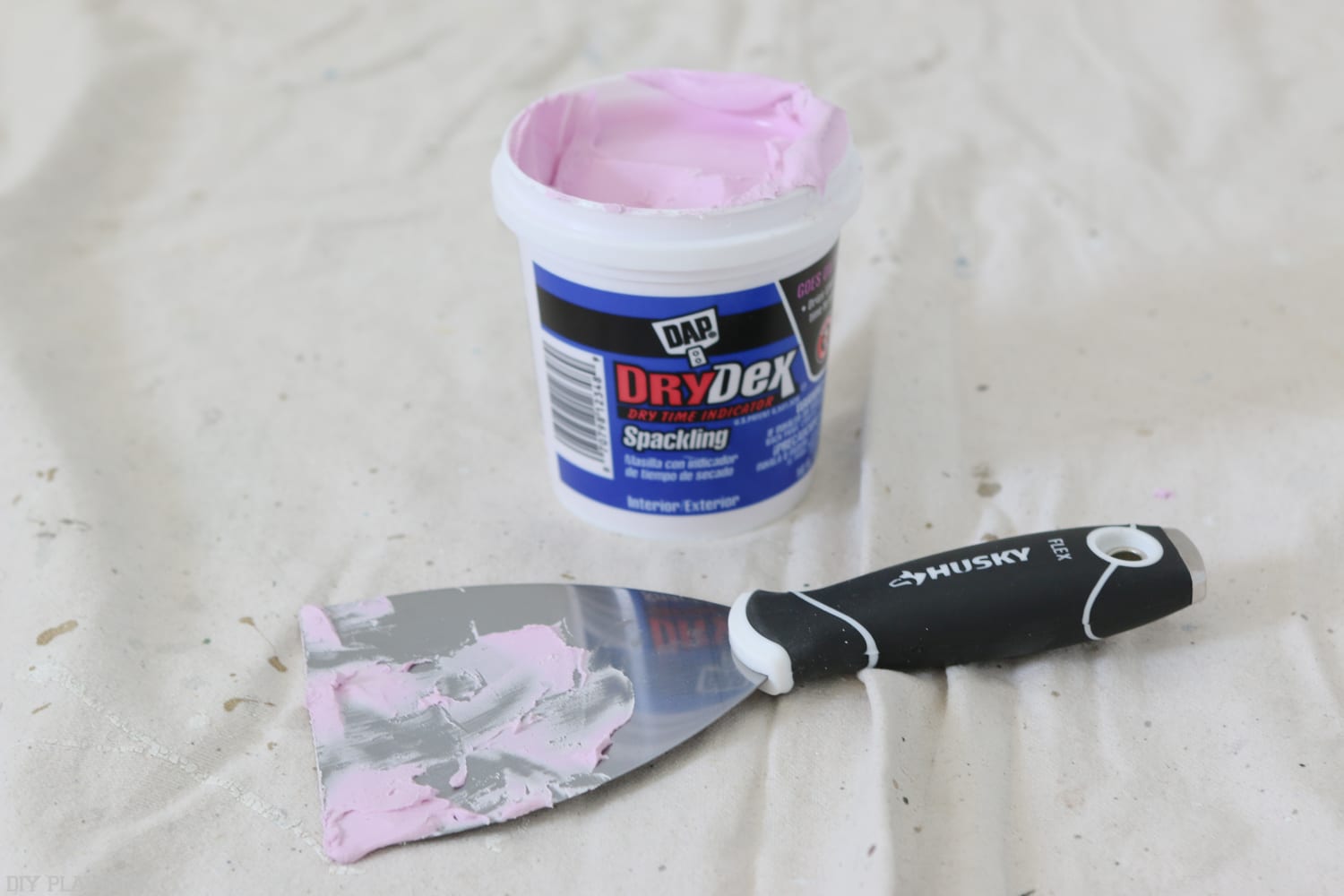 Once that wall is smooth it’s time to patch it. I like to use this pink spackle because it’s very easy to see where I patched (it’s bright pink!) and when it dries it turns white. 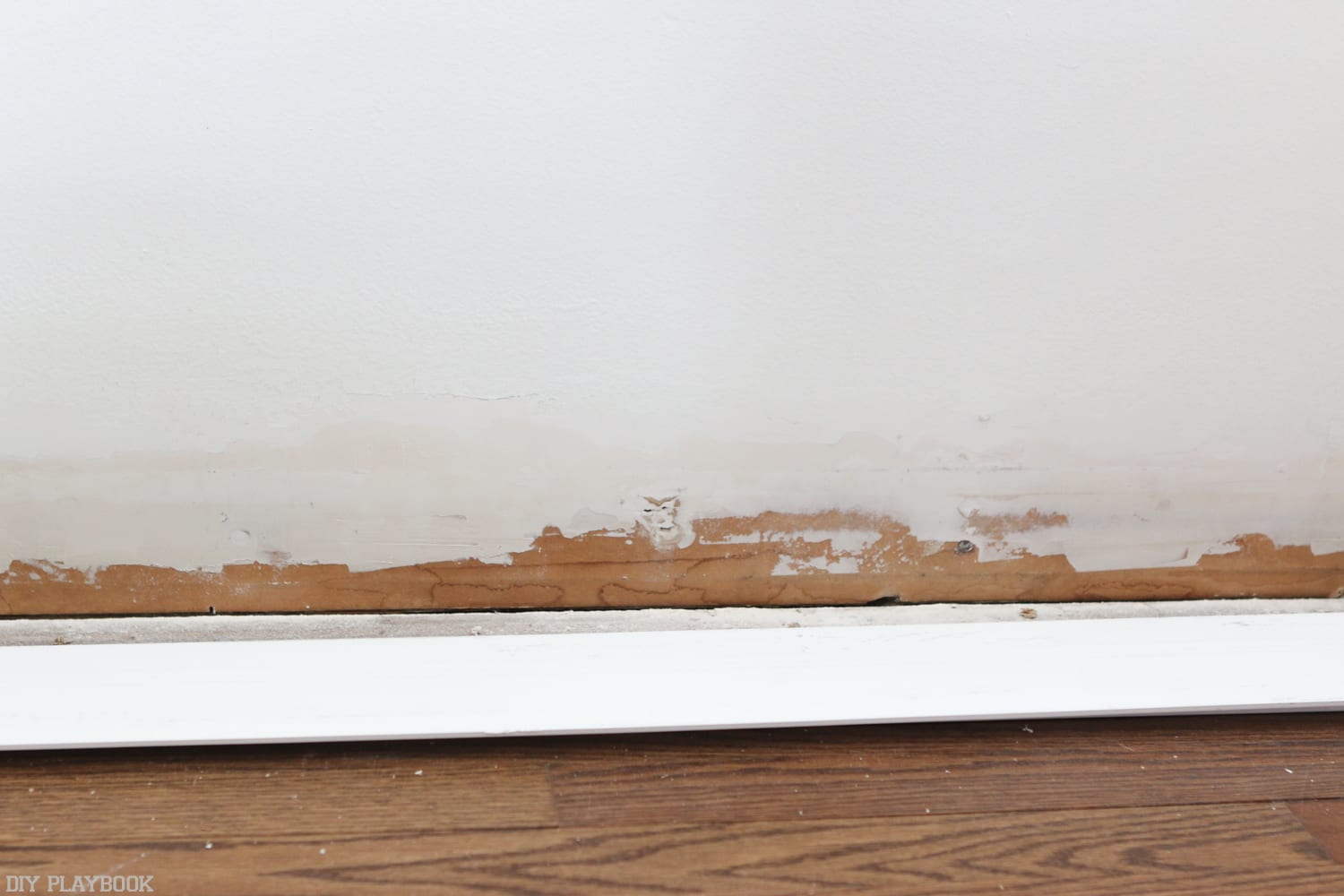 You don’t have to patch all the way to the floor, just enough to cover up the original seam. Heck if the old baseboard was removed super carefully you may be able to skip this step entirely! In my case the new baseboard was not going to match up to the old line and some of that grungy old wall was going to show. Patching ensured it would eventually look smooth like the rest of the wall.

5. Sand the Patches & Clean up 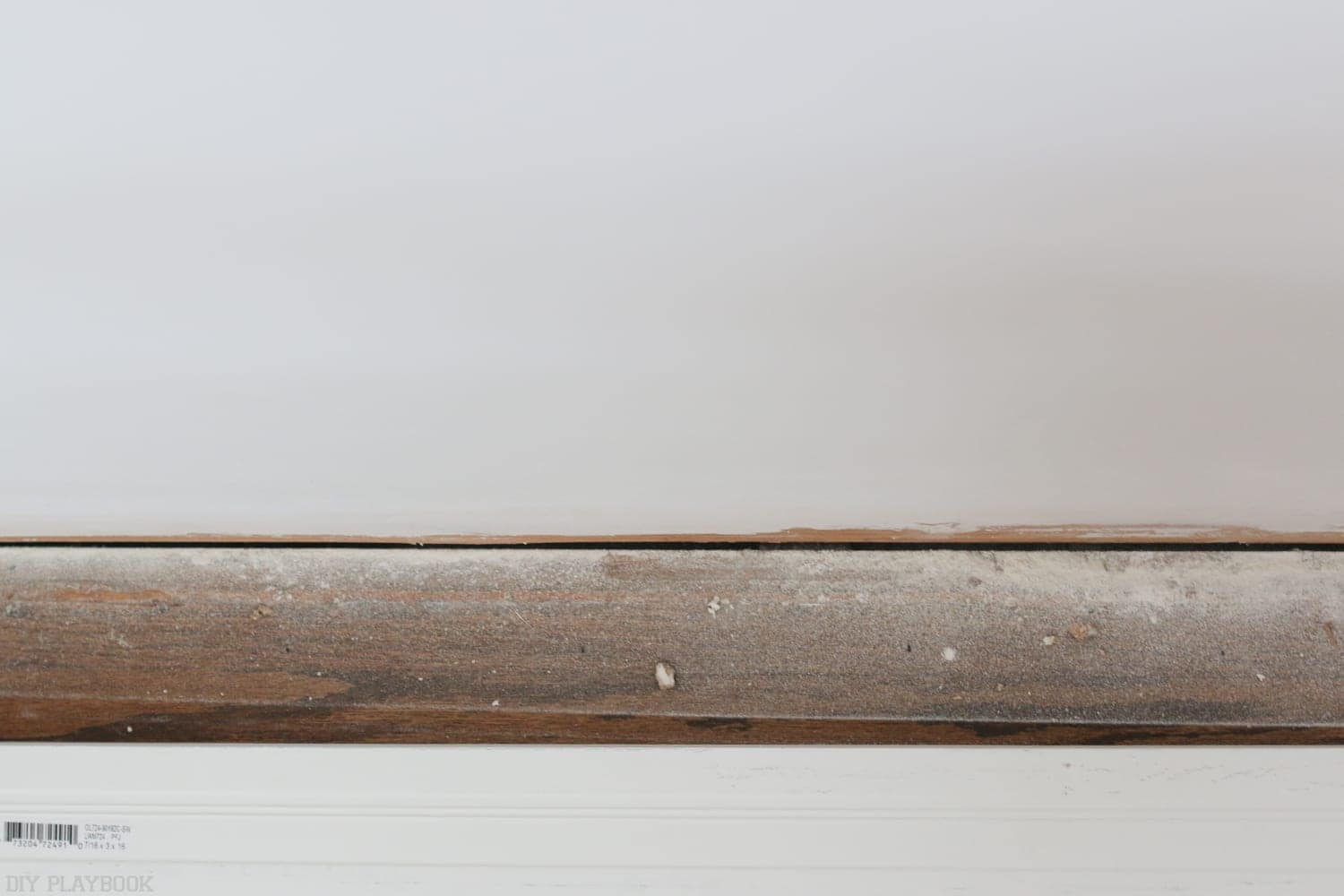 Once the patches have dried you can lightly sand the excess spackle from the wall until you’re left with a surface that’s smooth and consistent with the rest of the wall.

Rookie Tip: Sanding spackle is SUPER DUSTY so I would definitely suggest closing the door in this room (and all of the other rooms in the house!) while also putting down a drop cloth. Covering anything else in the room that could get dusty is probably a good idea too. I typically do a clean of the area after this step so that my work area is far less dusty when I move onto the installation/painting steps.

Can you believe we’re already half way done with this DIY!? As much as these steps go pretty quick, I feel like this post is already long-winded. I’m going to continue the last half of the step-by-step tutorial in tomorrow’s post.

I want to provide as many specific details as possible (including lots of pictures) and breaking this process up into two posts is the best way to do that. Plus, this is usually a two-day process and this post covers the steps I usually get done during Day 1.

You can check out the rest of this project here: How to Install Baseboard, Part 2 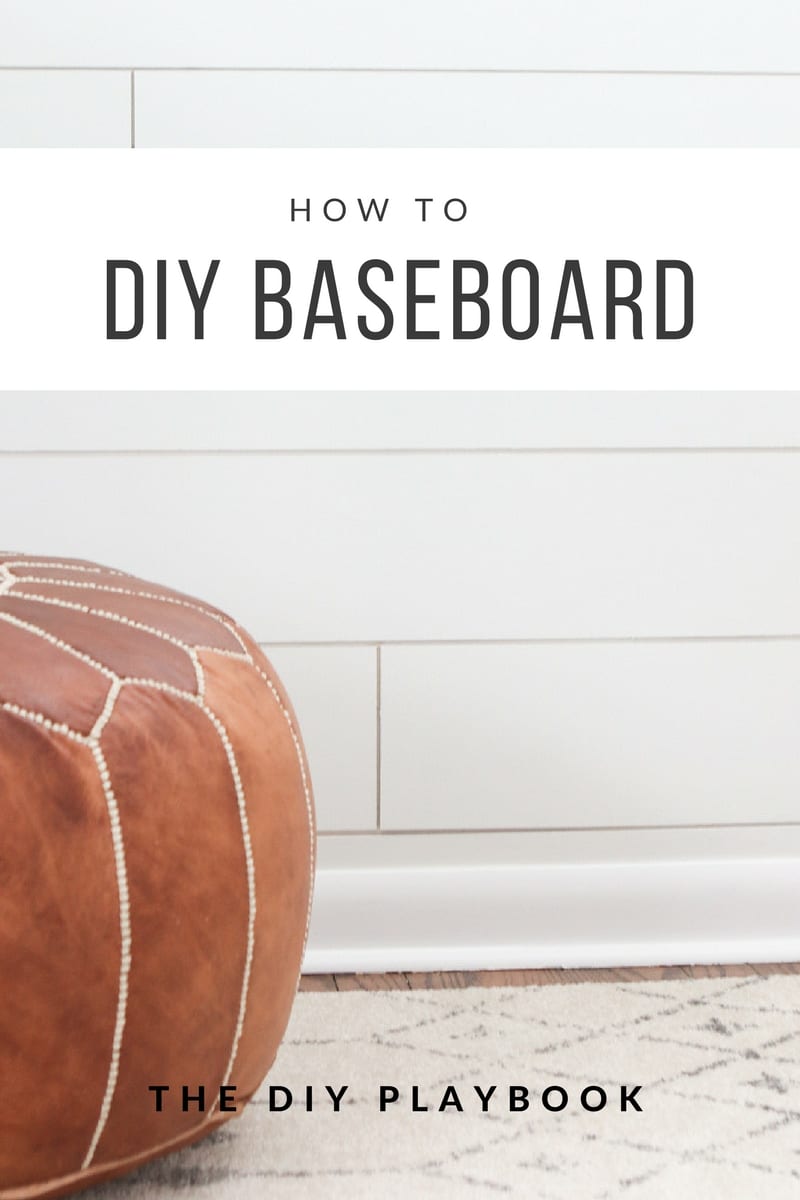