A few weeks ago, on my 31st birthday, I found out I was going to lose my third baby. Just 5 days before, I had received a call from a nurse saying that I was pregnant from our third embryo transfer, but the numbers were a bit low. We stayed cautiously optimistic that weekend, hoping that the embryo was just off to a slow start. I talked to the baby, willing it to grow and stay with us. I read success stories of other women who had low HCG numbers at the beginning, yet went on to have a healthy pregnancy.

But on Monday morning, I got the call. My numbers hadn’t doubled and I was told to stop all of my medications so I could miscarry naturally. I was having my second chemical pregnancy. 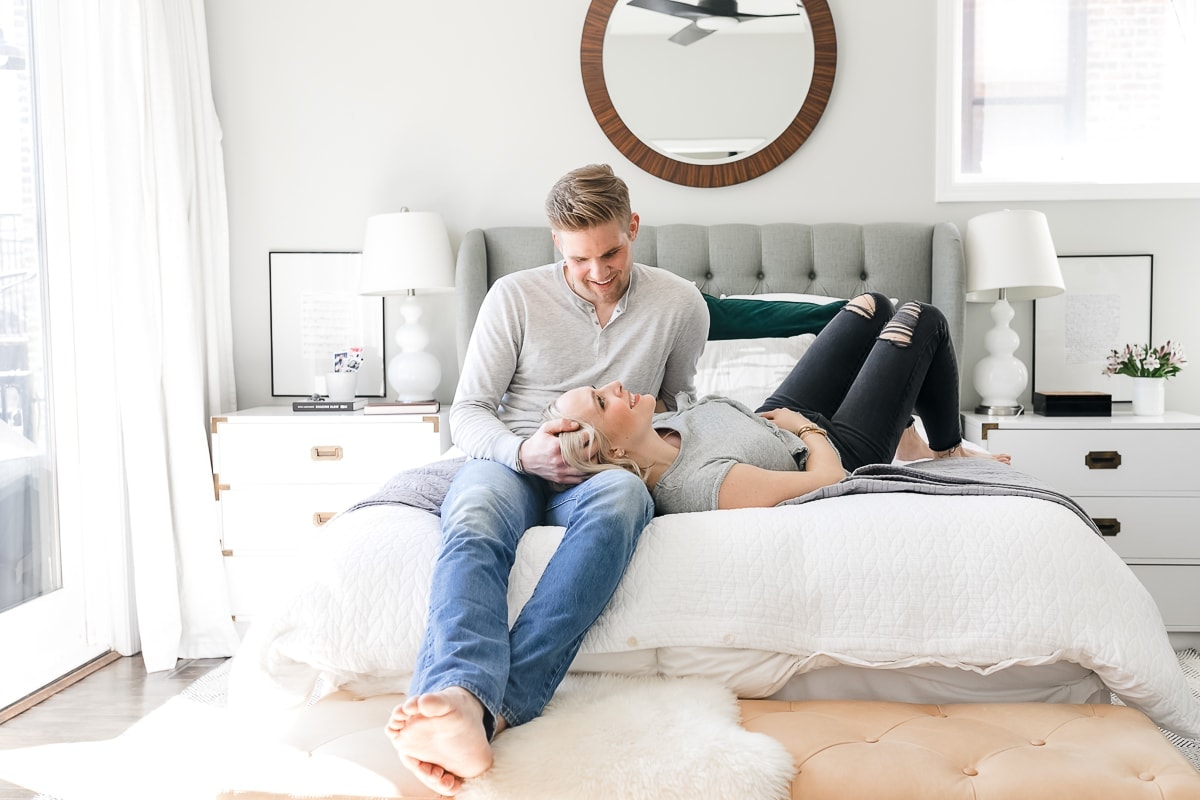 I thought maybe I would get a birthday miracle and our embryo would pull through. But sadly, it made for a very rough start to my 31st year. 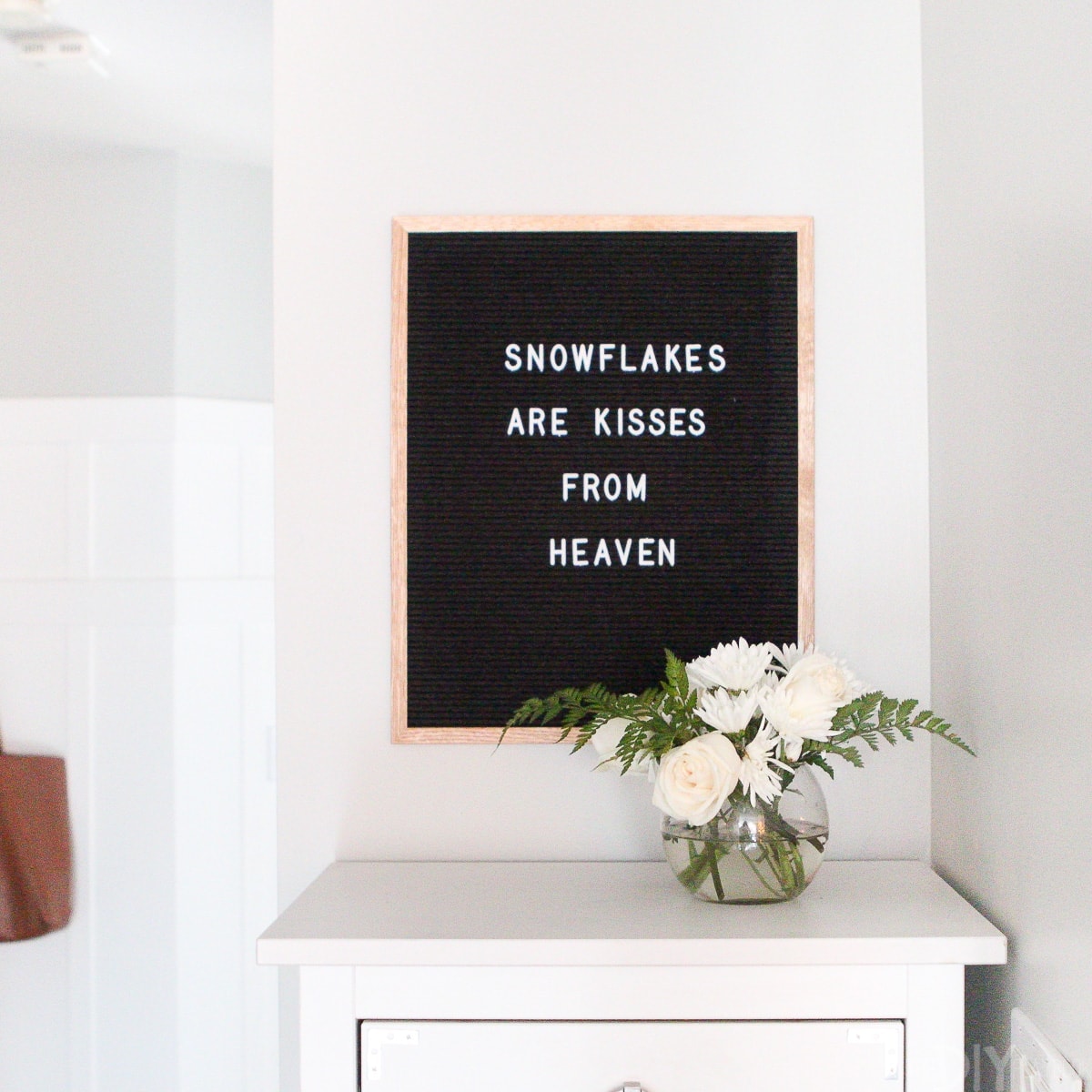 Last we chatted, I revealed that I had miscarried our son at 9 weeks back in November. I then spent the next 3 months undergoing multiple surgeries because my body was still holding onto the pregnancy. It wasn’t until the end of January that I finally recovered from all of the physical trauma.

The emotional trauma was another thing.

I knew we would move forward and try again, but the thought of getting my hopes up and losing another baby was just unbearable. We had 3 embryos frozen and ready for us, we just needed to muster up the courage to try again.

I ended up being pretty sick with a sinus infection throughout February, so we decided to take that month off and start back up in March with another embryo transfer.

Prepping for our 3rd Embryo Transfer

By March, I was finally feeling like my old self…at least physically. And even though I was terrified of moving forward, I knew that I had to. I started estrogen to prep my lining for an embryo transfer at the end of March.

When you’re prepping for an embryo transfer, you’re monitored frequently through blood work and ultrasounds. The week before my transfer, I found out that my body had responded a bit too quickly and my lining was already starting to break down. We canceled the transfer. It wasn’t ideal, but I told myself that April would be our month! 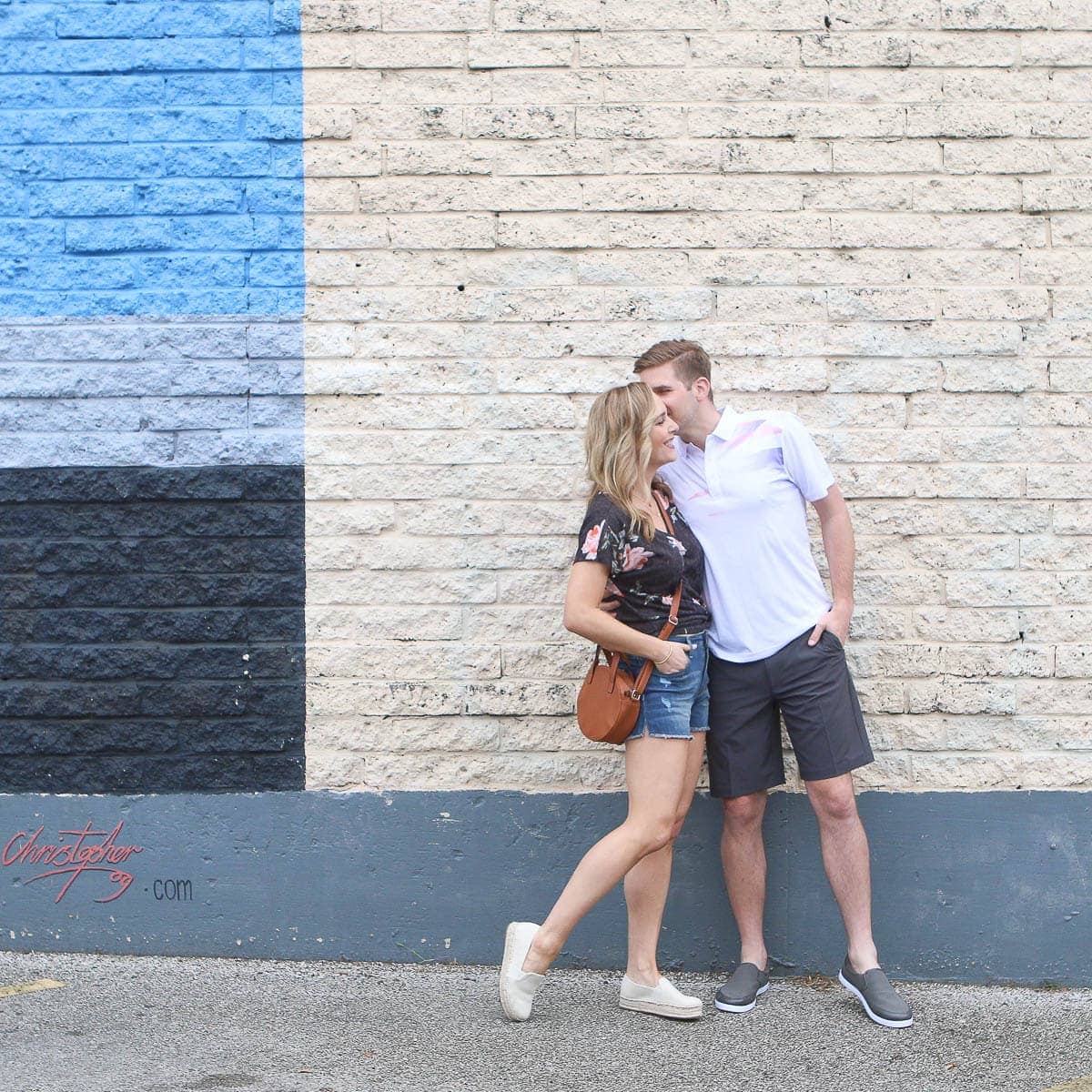 The next month, I started back up on the meds, this time with a gameplan to be on them for a much shorter timeline and to be monitored continuously. The only wrench in our plans was our trip to Austin. We didn’t plan to tell our family about the upcoming transfer, just because we didn’t want anyone to be emotionally invested if things failed all over again. So we did all of my shots and meds early in the morning while on vacation, in order to keep things under wraps.

My transfer was originally set for the Wednesday we returned from Austin, but after monitoring me closely, my doc decided to move it up…to the day we returned home from our trip. When you’re prepping your body for an embryo transfer, the timing is everything. You have to be on progesterone for a certain amount of time before you can do the procedure to put the embryo in. It really comes down to a window of a few hours. Even though Finn and I were taking the first flight out of Austin, we were terrified we might miss the window to put the embryo in.

We got to the airport extra early, did our shots in the family bathroom (gross), and prepared ourselves to sprint from baggage claim to a cab, to the fertility clinic. Luckily, our flight came in on time and we went straight to the doctor with all of our luggage.

We even bought new snowflake socks to wear during the transfer to bring us good luck. The snowflake symbol is now a reminder of the son we lost, so we thought having a little piece of him with us would bring all the good vibes.

We put our third embryo in; I spent the rest of the day relaxing and napping, and we prayed that this would finally be our take home baby.

I should probably rewind a bit to chat about how we were doing things a bit differently this time around. After my miscarriage, we both did a series of tests to figure out why it might have happened. Everything came back normal except for my natural killer cells. Yeah, that’s a pretty scary thing to come back high. Natural KILLER cells?! I was immediately panicked seeing those words.

Here’s my super non-scientific explanation for natural killer cells. Essentially,  they’re white blood cells in our immune system that fight off bad cells (like viruses and cancer). Even though they have a scary name, they actually play a vital role in a healthy immune system. However, high NKC may see a pregnancy as foreign and cause a woman to miscarry. It’s still a super new field and it’s heavily debated…some reproductive endocrinologists don’t believe in it at all. While others (like my doctor), see no harm in treating against these natural killer cells.

My doctor’s treatment for natural killer cells are intralipids. Which is basically an IV infusion of liquid fat. Yeah, seriously. My nurse told me it was basically the same thing as eating an entire cake (Oh, Goodie!). I ended up doing my intralipids infusion 2 days after my transfer. It amounted to about 3 hours of sitting there with the IV and it was fairly painless. This did work to bring my natural killer cells down, so that was good to find out!

Even though we didn’t have any concrete evidence that I had a blood clotting problem or autoimmune disorder, my doctor wanted to put me on her “kitchen sink” approach, along with the intralipids. That meant I would be on a hell of a lot of drugs — 3 shots in the morning (progesterone in oil, delestrogen, lovenox) and dozens of pills throughout the day (prednisone, Claritin, Pepcid, baby aspirin, progesterone, estradiol, etc.).

If it meant that I might carry a healthy baby, I didn’t mind taking all of the extra drugs. Yes, I felt like complete garbage while I was taking them, but that wasn’t going to stop me. The only shot that wasn’t my favorite was the Lovenox..a blood thinner. It bruised up my entire stomach (and I still have the bruises a month later), leaving really sore marks all across my abdomen.

I figured with my new protocol and ALL of these drugs, I would have a better shot at getting this pregnancy to stick.

Obviously, it didn’t do the trick.

Seeking Out a Specialist

I’ve been fairly devastated since our third failure. I chalked my first chemical pregnancy up to bad luck, the second miscarriage I thought might have been because of complications when the baby split into twins, but now that we had another chemical pregnancy, I began to think…am I ever going to be able to carry a baby?

When I was recovering from the trauma of the miscarriage months ago, I ended up making an appointment with a reproductive immunologist…Dr. Kwak Kim. The field of reproductive immunology is fairly new and there are only 3 doctors across the country who specialize in it. I ended up making an appointment with Dr. KK back in January but was not able to get in to see her until the end of June. Apparently, she is a miracle worker, so I can see why she has such a long waiting list! And I’m so lucky that she is here in Chicago. Many women travel from all over the world to see her!

My hope is that she will be able to figure things out for us. Why do we keep losing these chromosomally normal and healthy embryos? Why does my body get pregnant for a little while and then the baby stops developing? Are the natural killer cells a sign of a more serious auto-immune condition? I’m putting my hope in this doctor to find us some answers. And until we see her, we’re not moving forward with any more transfers. 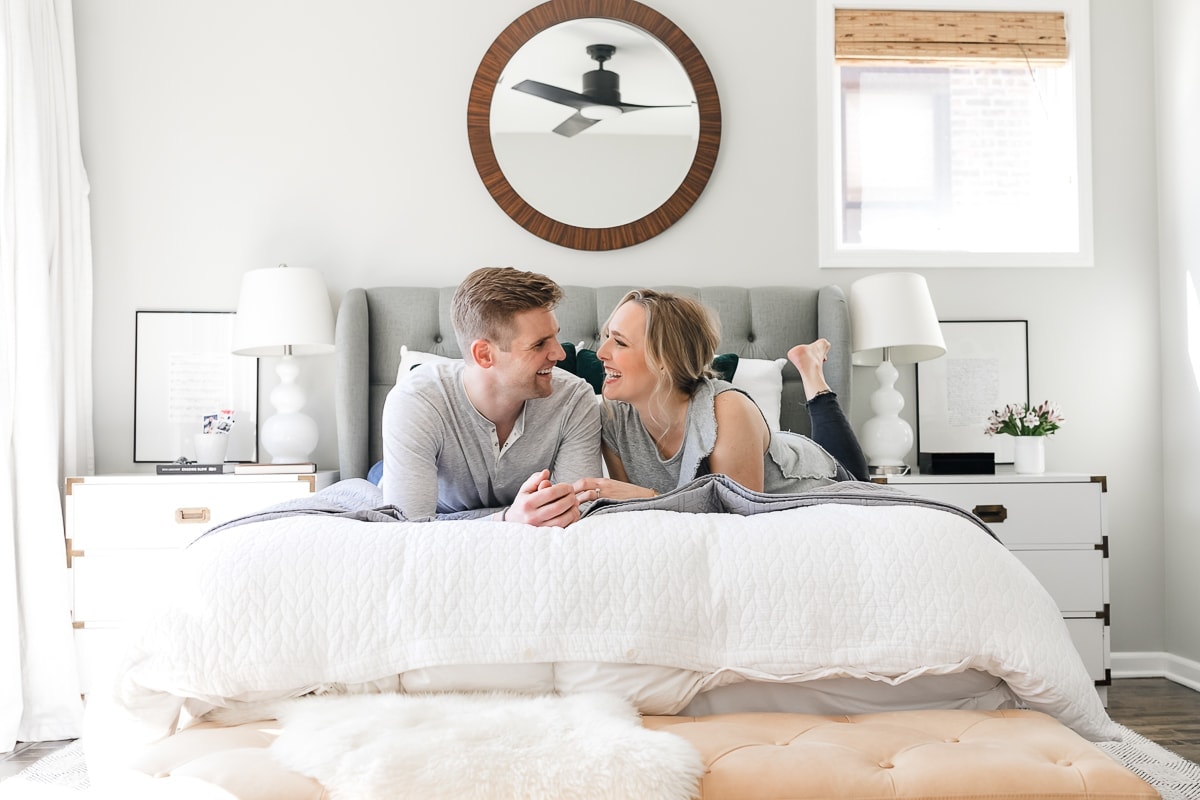 At the end of the day, Finn and I are going to be parents someway, somehow. We know we are meant to have a family. My plan is to give IVF everything I’ve got until a doctor says it’s time to move on. At this point, my doctor hasn’t said that. She keeps stressing to us that we’re young, healthy, and she thinks that I will be able to carry a healthy baby to term. But if that changes, we are very open to surrogacy or eventually adoption.

We just know that we aren’t giving up and this certainly isn’t the end for the Finn family.