Pregnancy After Loss and Infertility

It took me three years to get to this point where I’m weeks away from giving birth to a healthy girl. Three years with multiple rounds of IVF, two chemical pregnancies, and one devastating miscarriage. So you would think that once I finally became pregnant (and stayed pregnant), I would be full of joy and happiness! 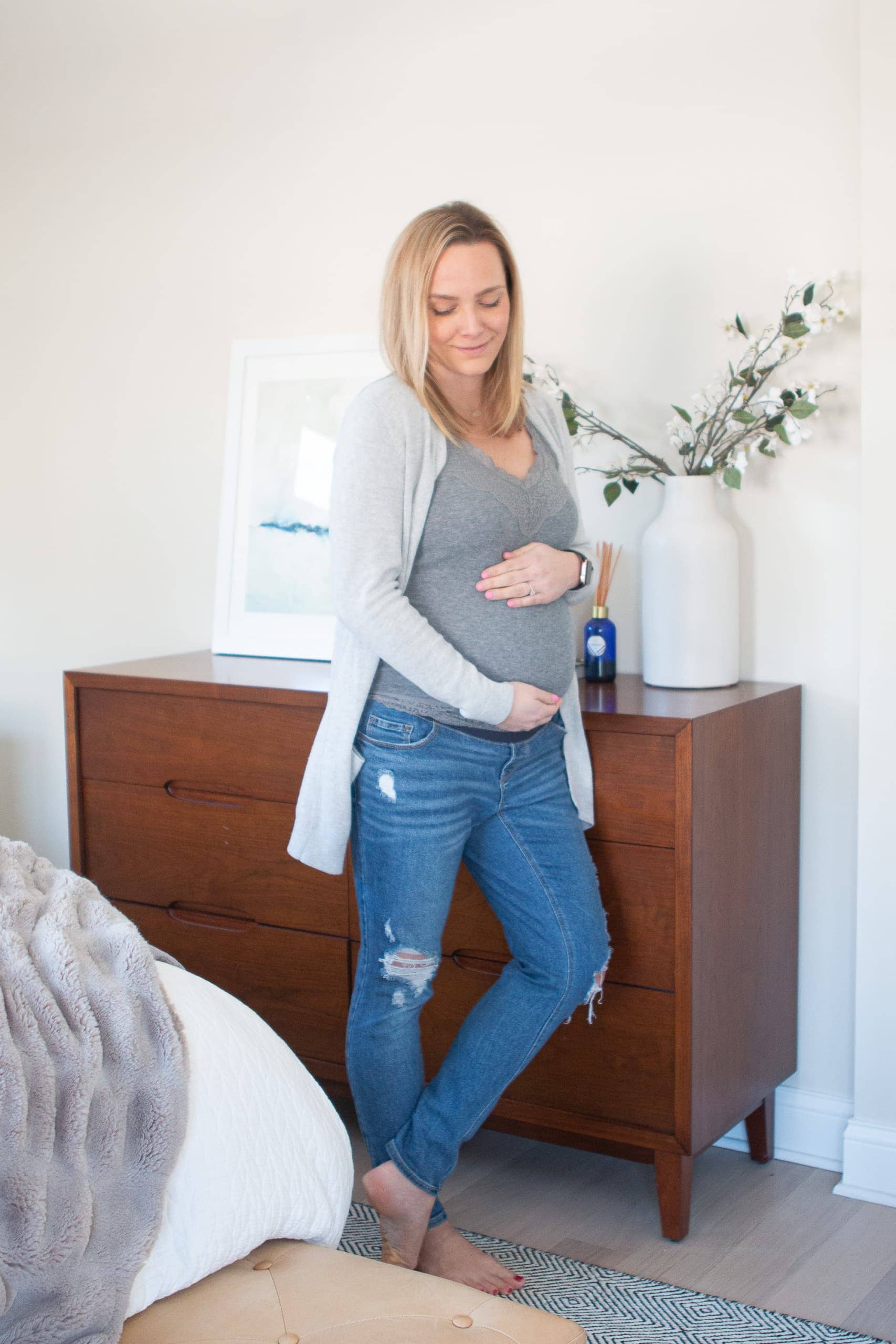 Pregnancy after loss has been a tough season for me. I wanted to be joyful and carefree and feel all of the happiness that I assumed every “normal” pregnant woman felt. But it’s been hard to get there. Instead, a big chunk of the last nine months has been spent worrying and feeling so much anxiety about what could go wrong. Even now, at almost 37 weeks pregnant, I’m scared about what could go wrong at birth and then losing our baby. Plus, the coronavirus pandemic has brought this to a new level of scariness and uncertainty about what lies ahead.

I’ve always considered myself to be a positive person who looked on the bright side. Granted, I’ve led a very privileged life without much adversity. I had the mindset that if I worked hard, good things would come my way and I could overcome anything. When we first faced our infertility challenges, I figured I could research and work to figure out a solution and boom…we would get pregnant.

That didn’t happen. And the deeper we dove into our infertility journey, the less positive I became. Maybe I couldn’t control this situation? Maybe the universe was against me? Then, our miscarriage happened and I truly lost all hope. I became a different person altogether. I was feeling negative and I was always assuming the worst.

Slowly, I crawled out of that hole (with the help of Finn) and I started to see the good in life again. It took time. Lots of time. And seeing a therapist to cope with the loss of our baby made a big difference. I started thinking maybe happy things could come my way? Maybe positive outcomes did happen? I’m grateful that I went into our most recent round of IVF with this better mindset and a glimmer of hope that it could work. And as we all know, it did!

When Will I Feel “Good” About This Pregnancy? 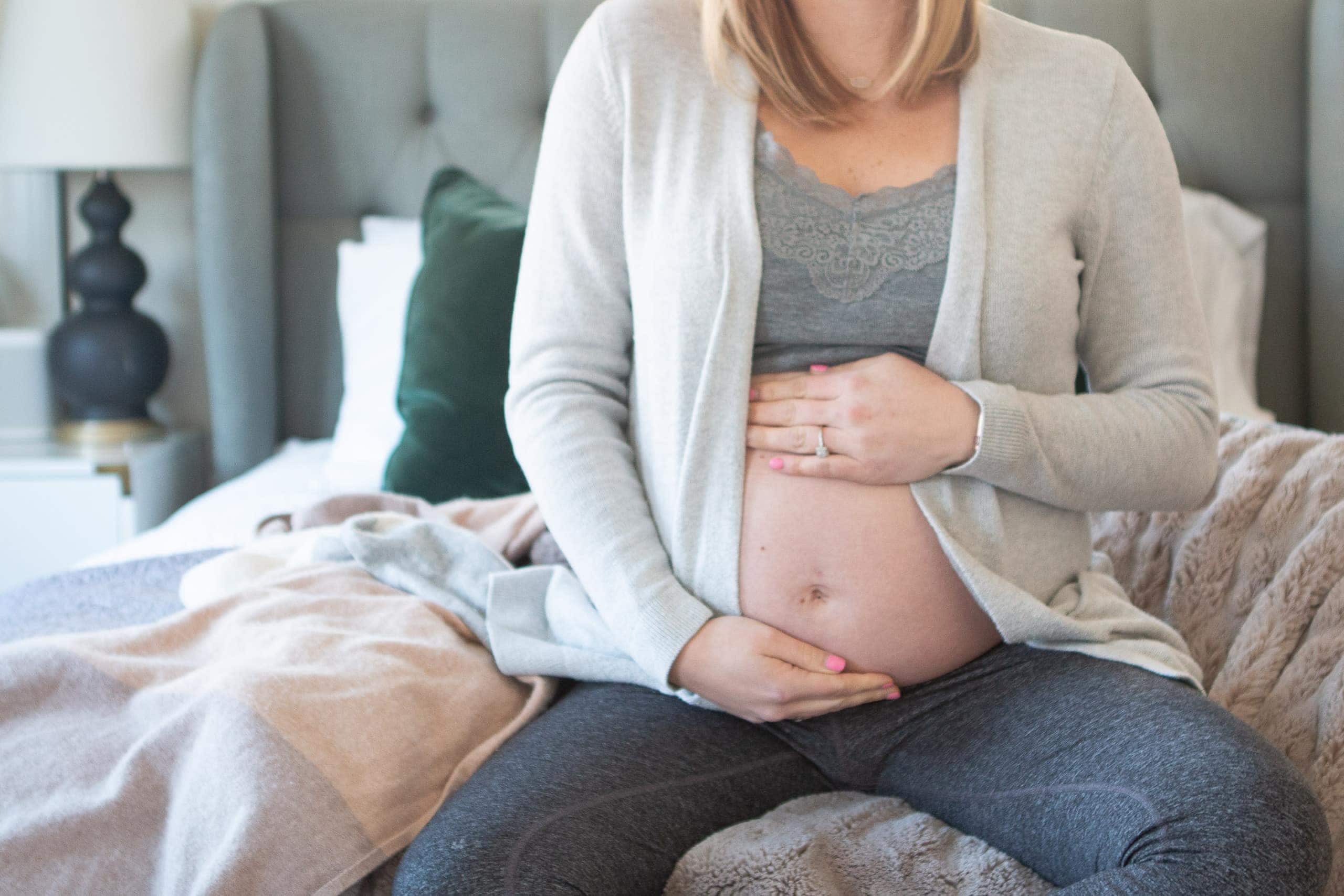 When I became pregnant, I was immediately worried about losing the baby. It had happened before and I was fearful it might happen again. I was afraid to tell anyone the happy news, thinking that I would just be calling them a few weeks later with sad news. At eight weeks, I had a subchorionic hematoma that led to lots of bleeding. I was sure that I had lost the baby…again. But after a 14-hour hospital stay, we found out that the baby was doing okay.

I know many women announce their pregnancy in the second trimester (around 13 weeks) because that’s when you’re considered in the “safe zone”. My first trimester crawled by as I awaited that safe zone. But once I got there, I felt anything but safe.

Taking It Week by Week

I’ve had so many pregnant women reach out to me over the past nine months to ask me when I felt good about our pregnancy. When was I finally able to relax? I wish I could give them a magic number and say at 16 weeks I was so happy and confident that it would all turn out okay. But that would be a lie. Instead, my best advice is to take it week by week.

I decided to stop wishing I was further along in my pregnancy and instead, take it week by week. I focused on the exciting developments happening with the baby that week and really got into taking weekly bump photos (as well as a fun weekly video with Finn that I will share once the baby arrives!).

Yes, I’m still scared every step of the way, but taking it week by week helped me live in the moment, instead of fearing the “what ifs” of the future. I also have a few concrete tips that helped me throughout my pregnancy… 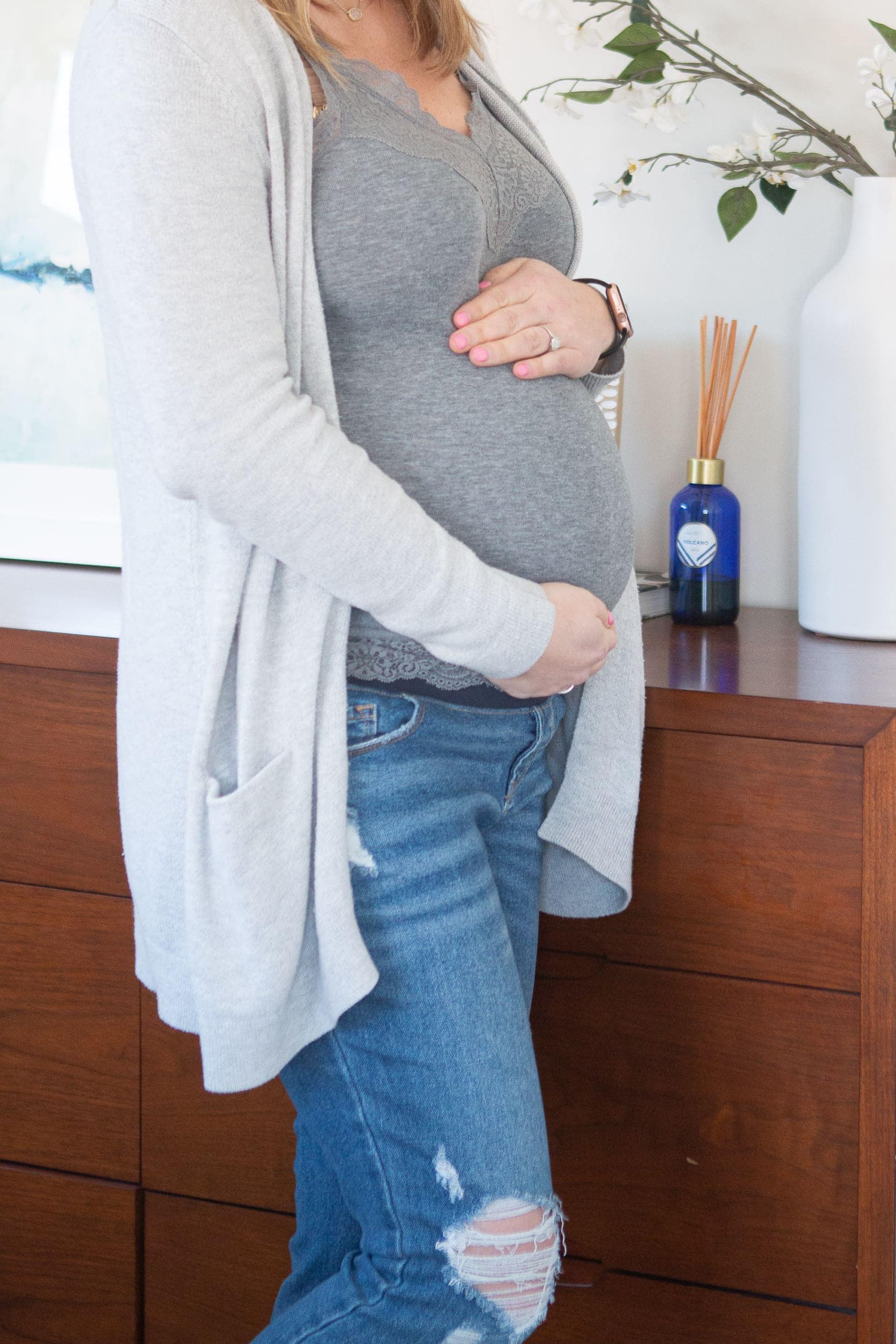 Once I entered my second trimester, I started using an at-home heartbeat monitor. This is placed on your belly so you can hear the baby’s heartbeat (be sure to use electrode gel too). My friend (who is an OB/GYN) gave me one that she bought online and used during her pregnancy. I know this isn’t for everyone (and talk to your doctor before you buy one), but it helped me tremendously. Whenever I was feeling anxious, in-between doctor’s appointments, I would take a few minutes to find the baby’s heartbeat and the steady rhythm of her heart soothed me. I only did this for a couple of minutes, once or twice a week, until I started feeling the baby move (around 22 weeks). If your anxiety is high, this might help. 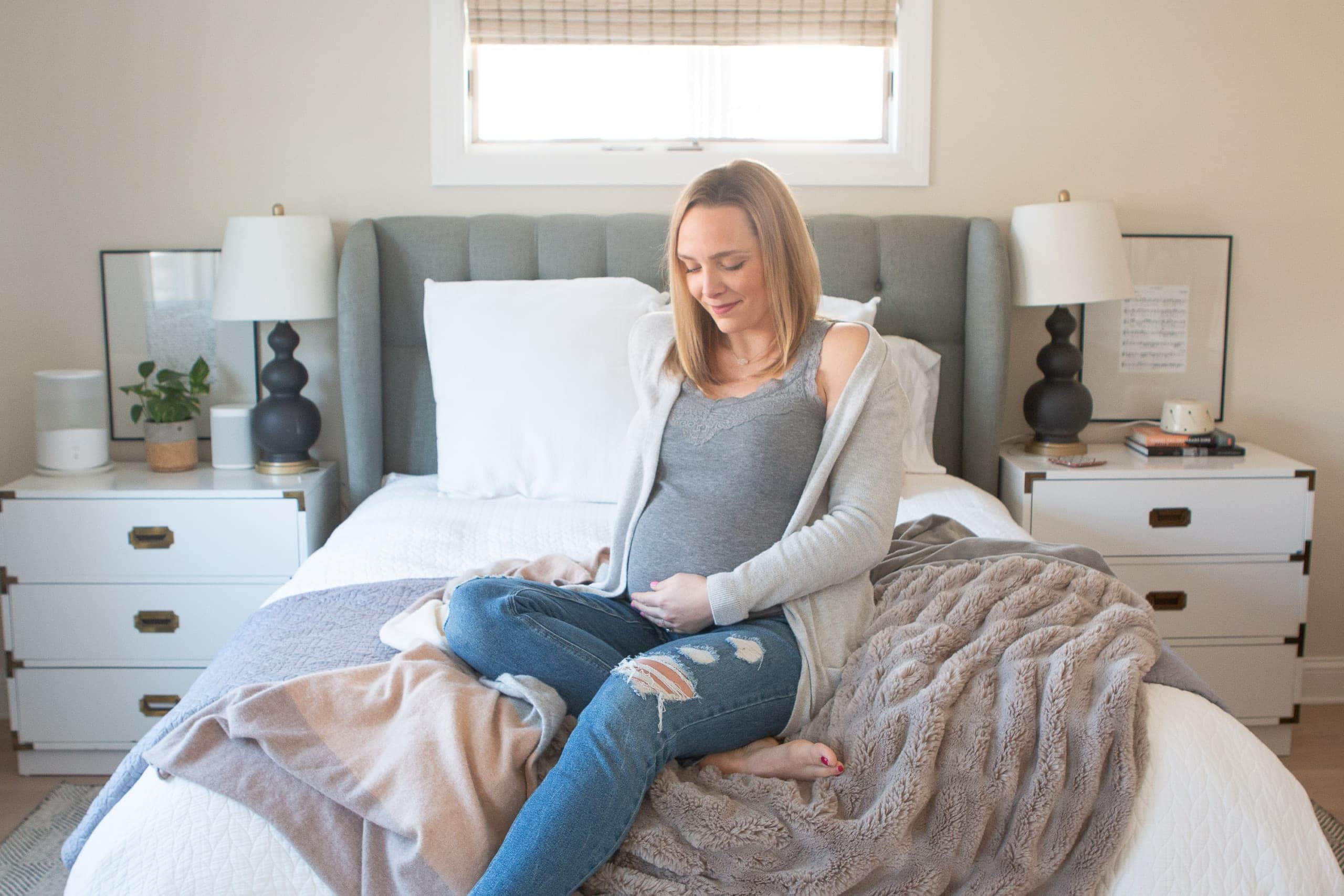 Because I’m seeing a specialist, I’ve been monitored closely my entire pregnancy…with ultrasounds every one to two weeks. My visits to the OB are just like a “regular” person. I’ve only had two ultrasounds there and  very few appointments until the third trimester. If you’re going through pregnancy after loss or pregnancy after infertility, ask your OB if you can schedule a few more appointments for reassurance. (Note: I know that this may not be possible right now with coronavirus concerns, but hopefully leaving the house won’t be as risky in the near future.) My doctor told me that many of her IVF patients request to come in for more monitoring because they’re on edge and nervous about something happening. If that’s you, it’s okay to ask to be checked out more often.

Every time I would leave an appointment, I would be on cloud nine, knowing that my baby girl was okay. Then, in the time between appointments, I would start to feel that fear creeping back in.

Stay Off the Internet 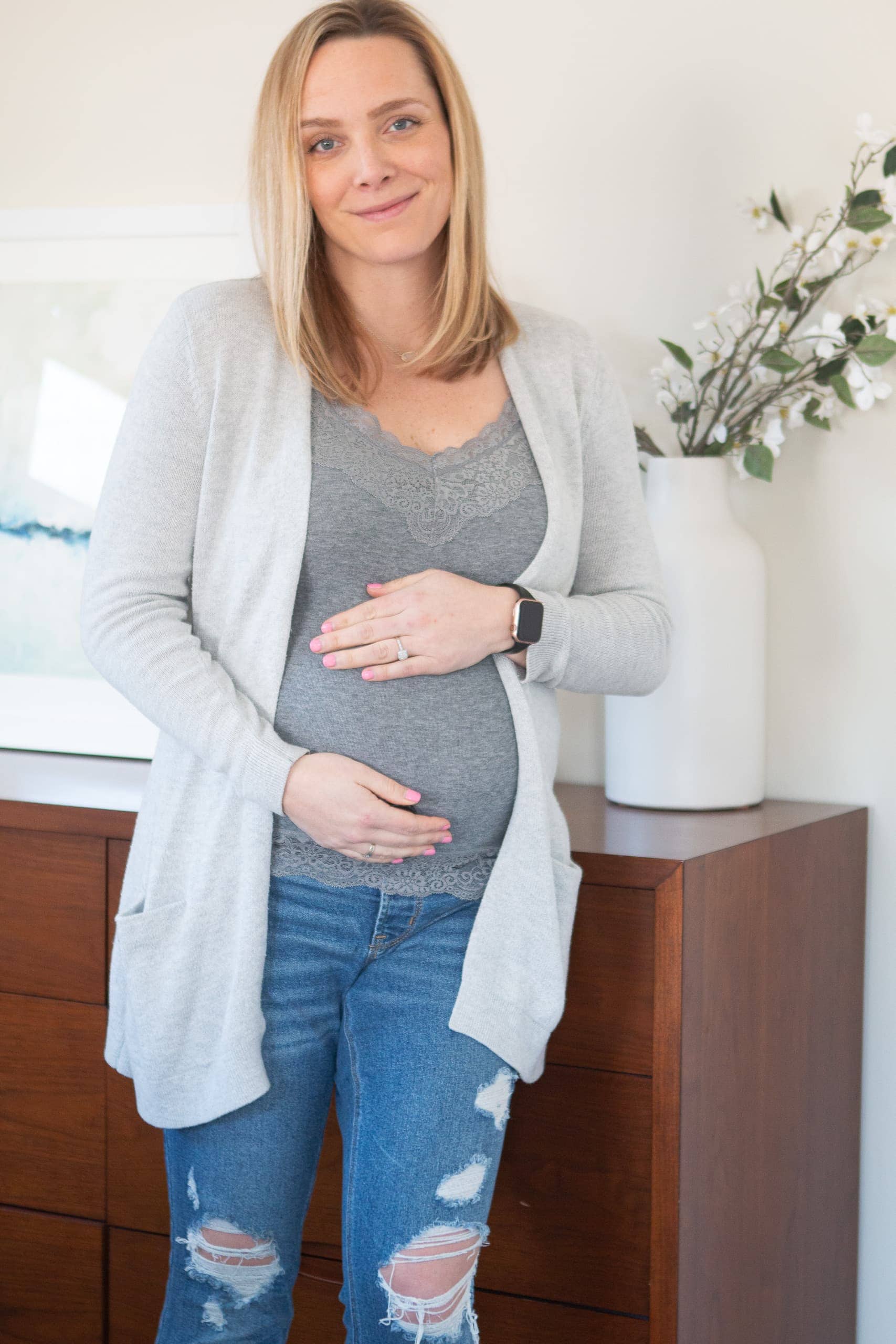 Oh man, I’ve turned to Dr. Google far too many times and it always leaves me anxious and freaked out. Don’t. Do. It. You’re just bound to find a horror story from a very, very rare pregnancy gone wrong and it will put you in a downward spiral of fear. That has been me a few times throughout my pregnancy and it’s not worth it.

At around 29 weeks pregnant, my specialist found that the blood flow in the baby’s umbilical cord wasn’t working properly. The baby was growing fine and on track, but the blood flow was a concern and if it didn’t improve, they said I would have to get her out early. They changed my meds and told me to come back in four days. I left that appointment in tears and immediately started googling everything I possibly could, searching for a similar situation. My googling led to four rough days of being terrified that we were going to have to deliver early or that something would go wrong.

When I went back to the doctor, the blood flow had improved and it has since continued to improve (they’re monitoring it very closely!). I should have just listened to my doctor instead of googling the worst-case scenarios on the internet. 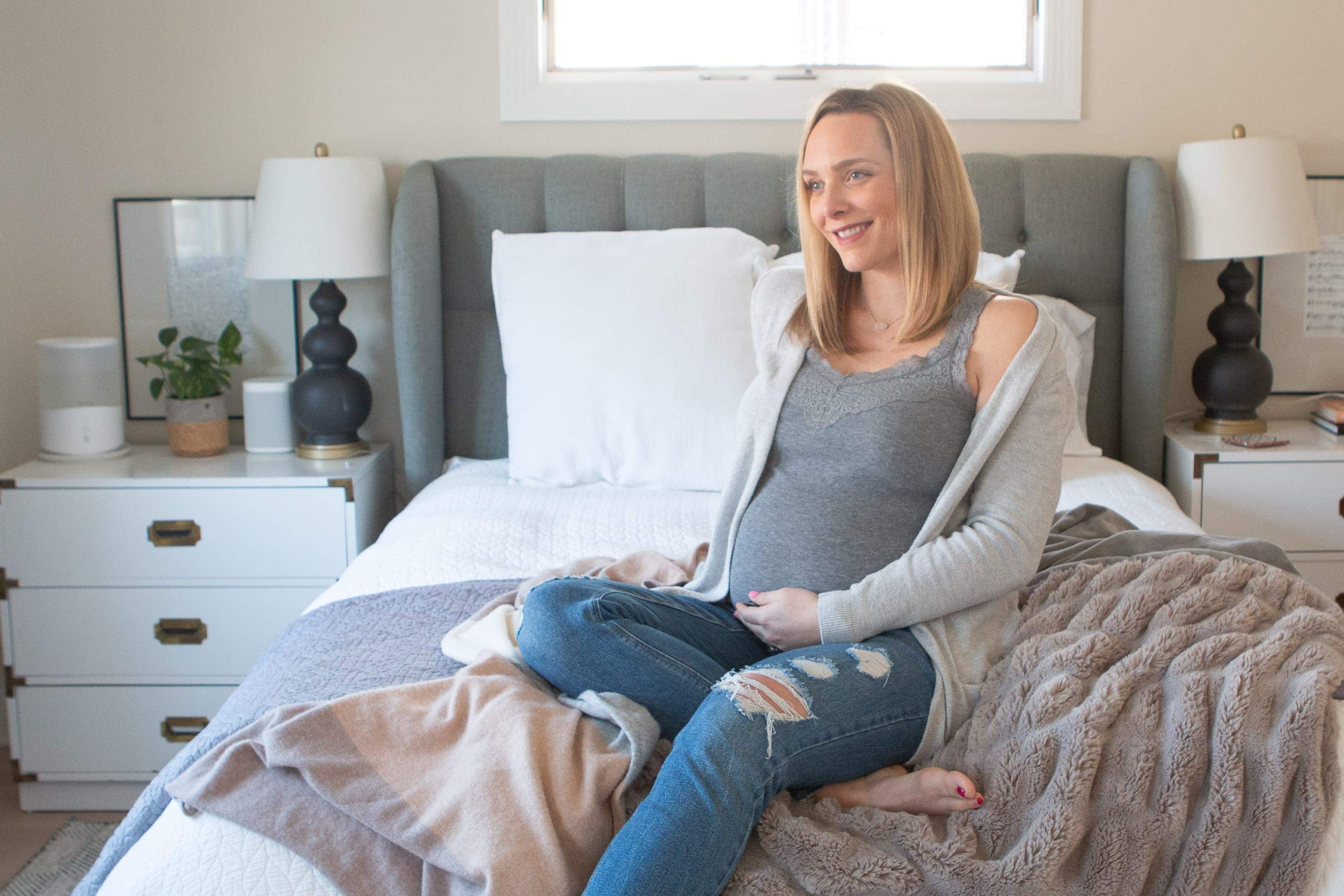 The final thing that has helped me is realizing that worrying won’t change anything. I can choose to be miserable and scared now and waste my entire pregnancy feeling that way. Or, I can find joy and happiness and enjoy every moment of this experience. Throughout our entire journey to parenthood, Finn has always reminded me that it’s okay to be happy and get your hopes up. Because if something goes wrong, you’re going to be devastated, no matter what. Guarding your heart throughout the process only makes you miserable right now. It won’t make you feel better should anything happen. While this isn’t the most uplifting sentiment, it makes sense to me. It’s okay to be happy, hopeful, and positive.

I would be lying if I said I wasn’t a bit scared about something going wrong with our upcoming labor, especially with coronavirus piled on top of my anxieties. But when I have those times of panic, I just picture the moment when the doctor will place my daughter on my chest and I’ll hold her for the first time. Maybe then, I’ll finally feel peace.