[Disclaimer: We partnered with the manufacturer of LLumar Window Film to bring you this post. All opinions are our own. Thanks for supporting the brands that support this blog!]

I’ve talked about my love for natural light here on the blog before. The huge picture windows in both our living room and family room were actually one of the main things that sold me on buying this house. During our showing, I walked in and saw the open concept paired with the natural light streaming in the big ol’ windows and I was instantly sold. I knew it was “the one” and I hadn’t even seen 75% of the house yet! That probably shows you how many BAD houses we looked at before seeing this one. 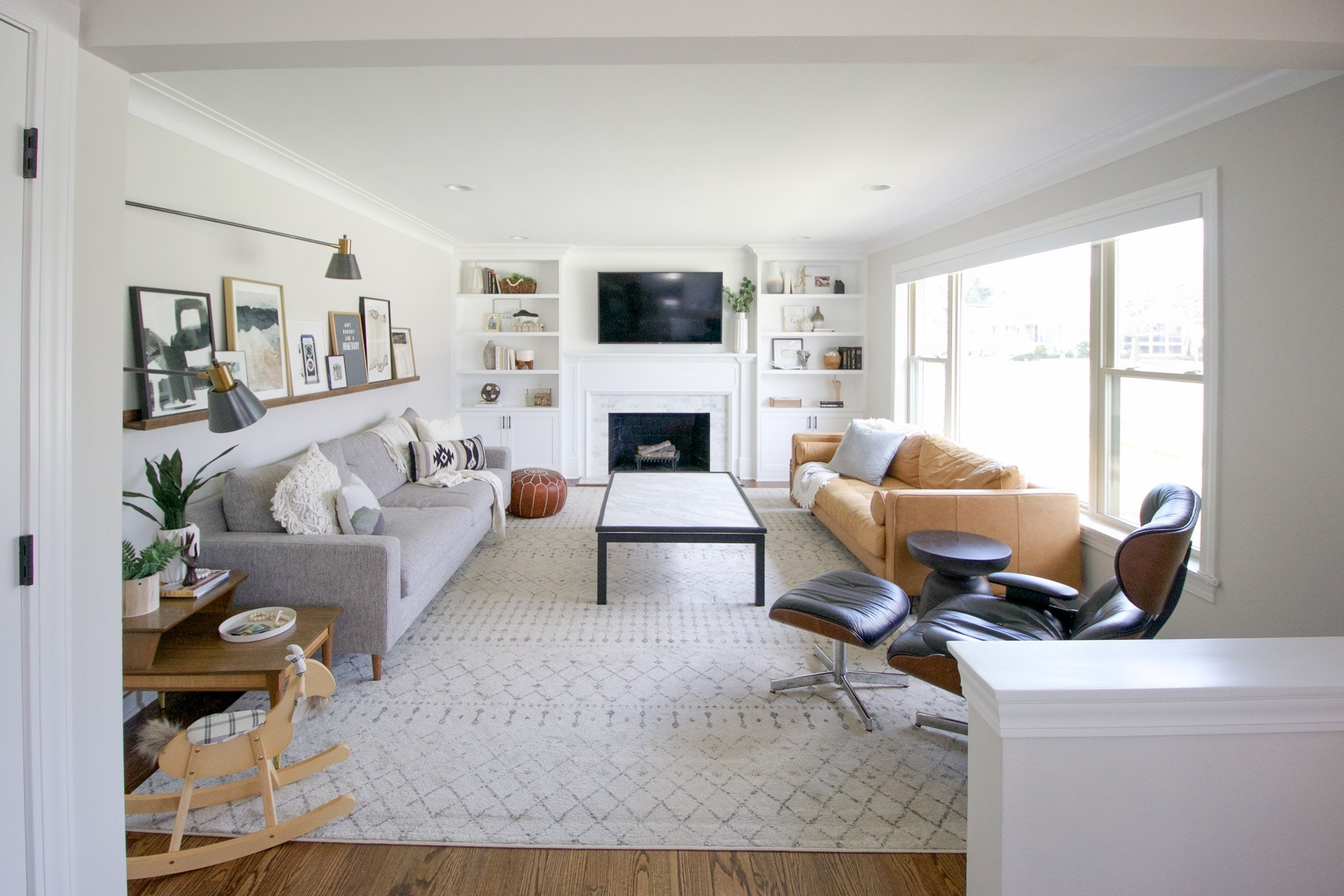 Call me high maintenance, but I personally could never buy a house that didn’t let in lots of natural light. If it was up to me, I probably wouldn’t even have blinds on any of my windows because of this exact reason. Waking up to bright light streaming into my bedroom? There’s nothing better! 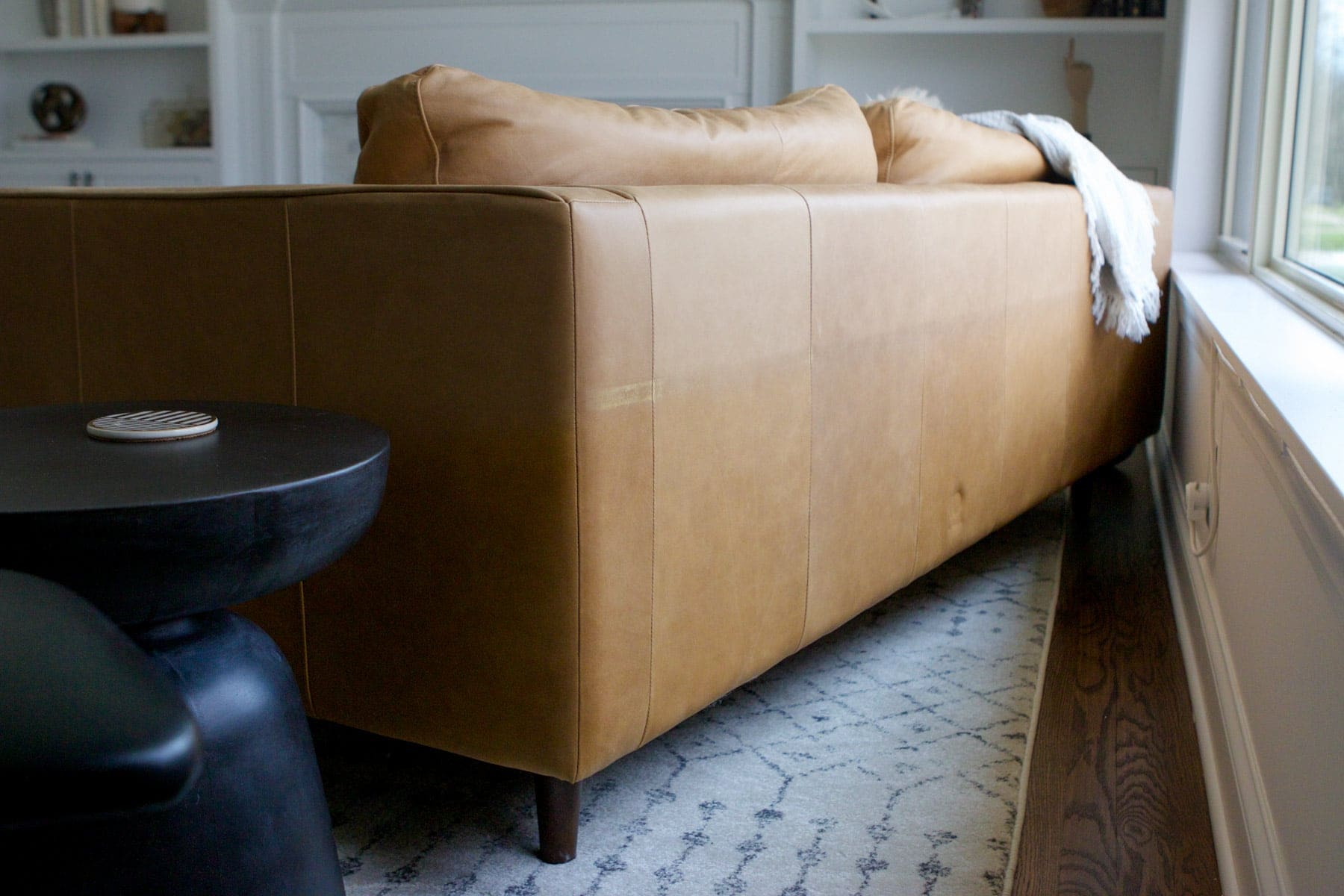 But as I’ve become a more informed homeowner, I’ve learned that natural light does come with some negatives (which is a lot for a light lover like me to even admit!). Big windows with sun streaming in are perfect for napping, but not so ideal when it comes to faded furniture via sun damage. Can you believe our leather couch already has sun damage and we’ve only had it for one year?! 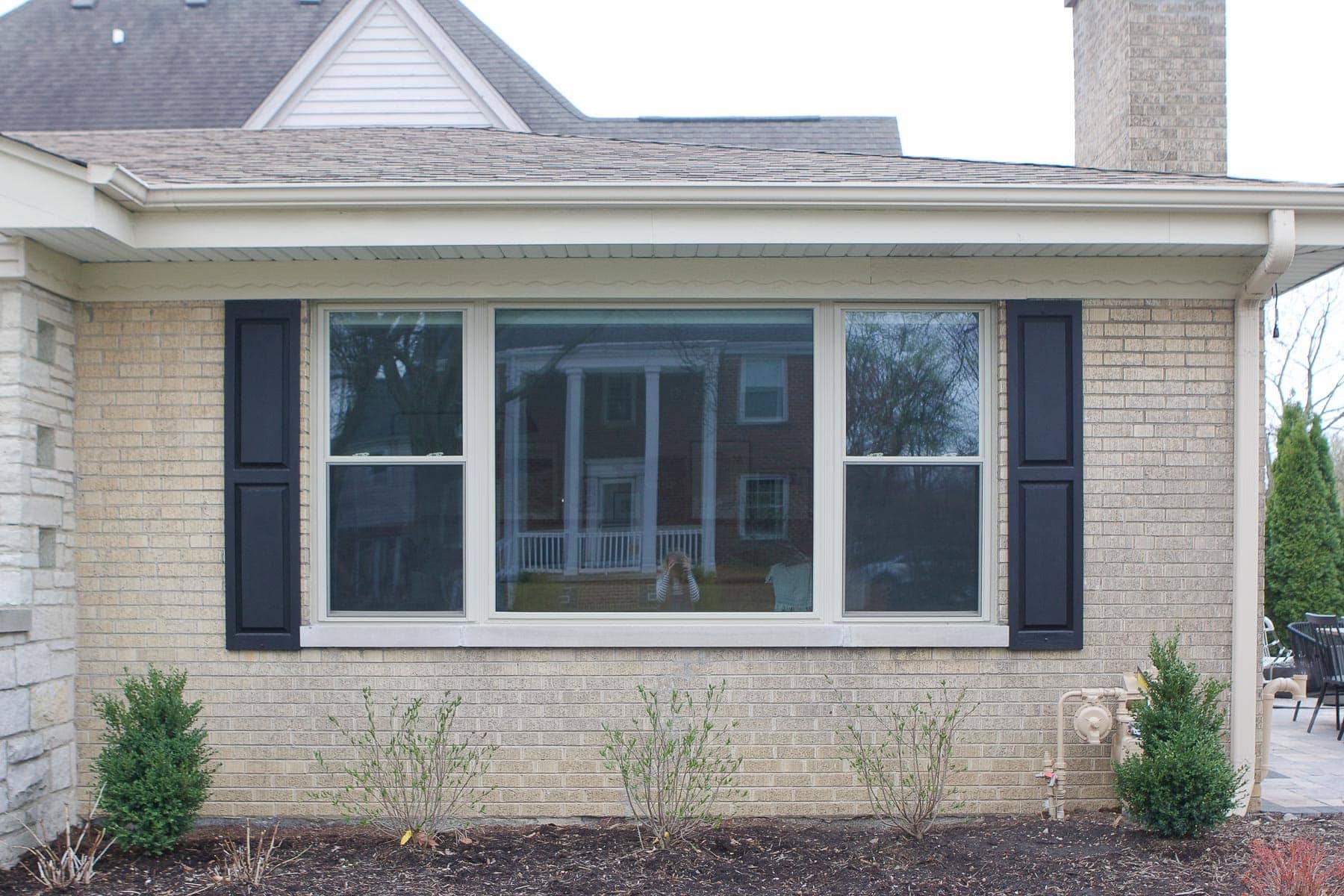 Big windows also mean it’s harder to keep the house cool while the sun is beating in! And did you know you could even get a sunburn through the windows of your home?! The struggle against UV rays is real for extra pale people like me!

When Eastman Performance Films reached out to us a few months ago to team up on a way to combat these very real concerns, we were intrigued to hear more! They are the leading manufacturer and marketer of high-performance window films and tints that are used in residential, automotive and commercial applications. We were specifically interested to hear about LLumar, their line of residential window films. 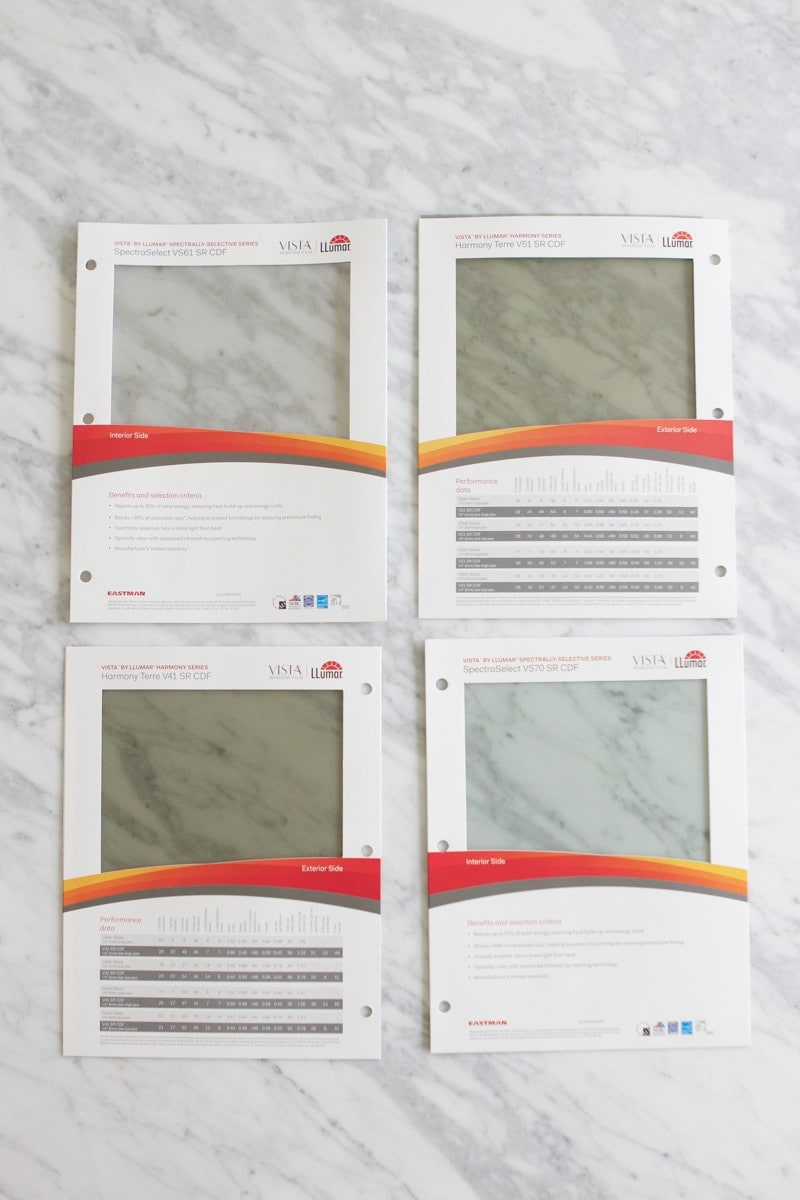 We quickly learned that their LLumar products were even better than we imagined and would be a perfect way for me to continue to enjoy ALL the natural light, without paying the price of faded furniture, extra hot temps, or even a sunburn! LLumar works with local dealers across the nation to install window films, so I decided to give my local company a call (after using LLumar’s SelectPro Dealer locator to easily identify my local installation company) and see if a window film could solve some of the problems that come with our big windows.

Working With A Local Dealer 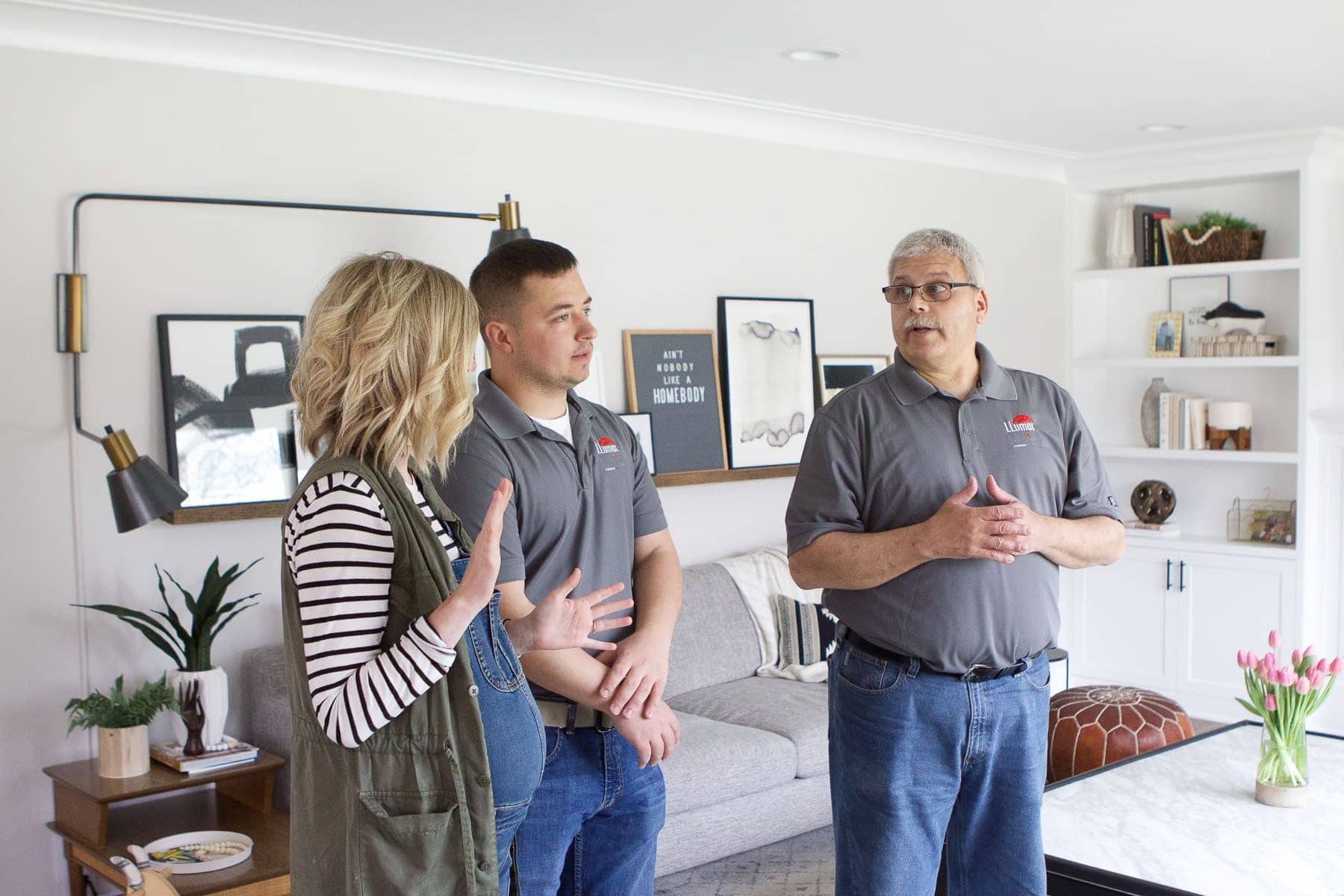 I scheduled a free consultation with my local dealer, Tint To U. They came out to give me more information about the window films available, measured my windows, and gave me a quote for the products I chose. This consultation was SO helpful and really proved that moving forward with LLumar window films was definitely the way to go. Here were some of my questions and what I learned in the process…

Will it impact the amount of natural light coming in? 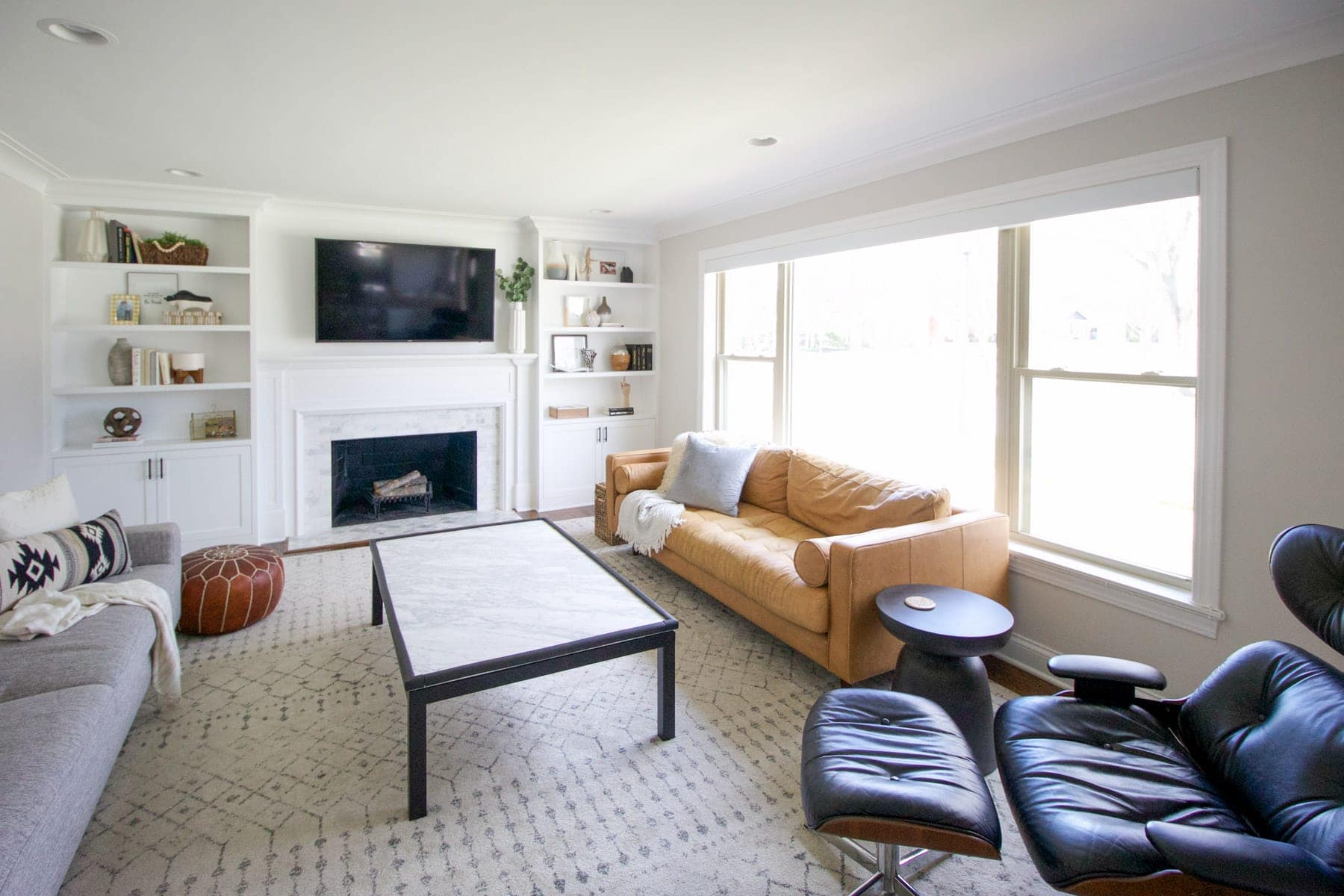 If I asked this question once, I probably asked it ten times just to confirm that this film would not impact the amount of sun that streams into our home. Obviously, that would have been a deal breaker for a natural light lover like me. Jeff, from Tint To U, kindly reassured me (over and over again!) that although there were plenty of options that would limit the amount of sun streaming into a home, that would not be the case on the style I chose! He suggested the VS 70 window film because it’s virtually a clear film BUT it will help protect our home from more than 99% of the UV rays and will help reduce the heat level by 45%. Sounds perfect to me!

Will my windows look like they’re wearing transition sunglasses? 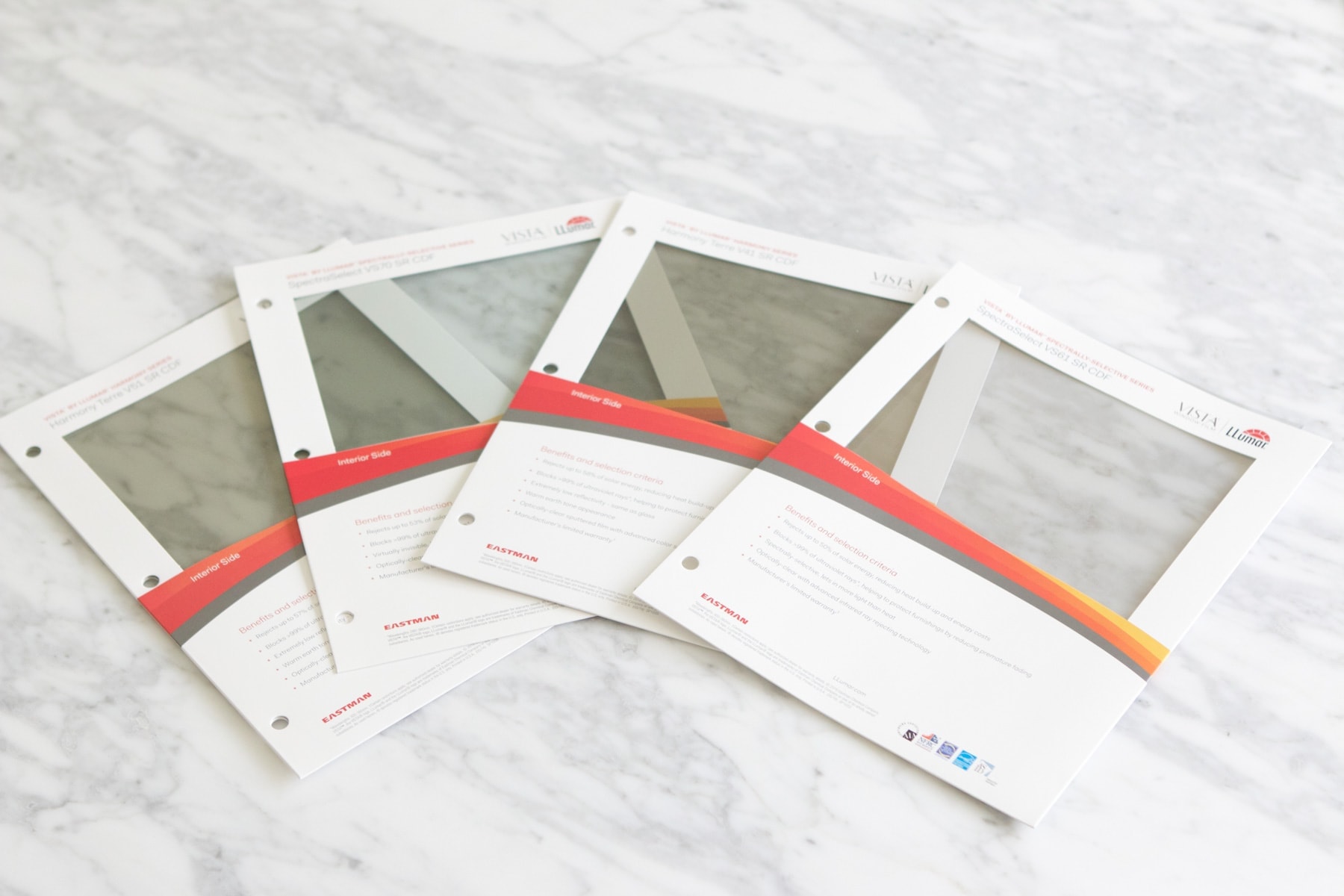 This was my other deal breaker. Although I wanted to protect my furniture, rug, and hardwood floors from sun damage, I didn’t want to do that at the cost of having windows that looked like they were wearing transition glasses. You know, the ones that look like regular glasses until it gets sunny and then they magically turn into sunglasses? I also didn’t want my house to look like windows from the back of a limo! Haha, poor Jeff! 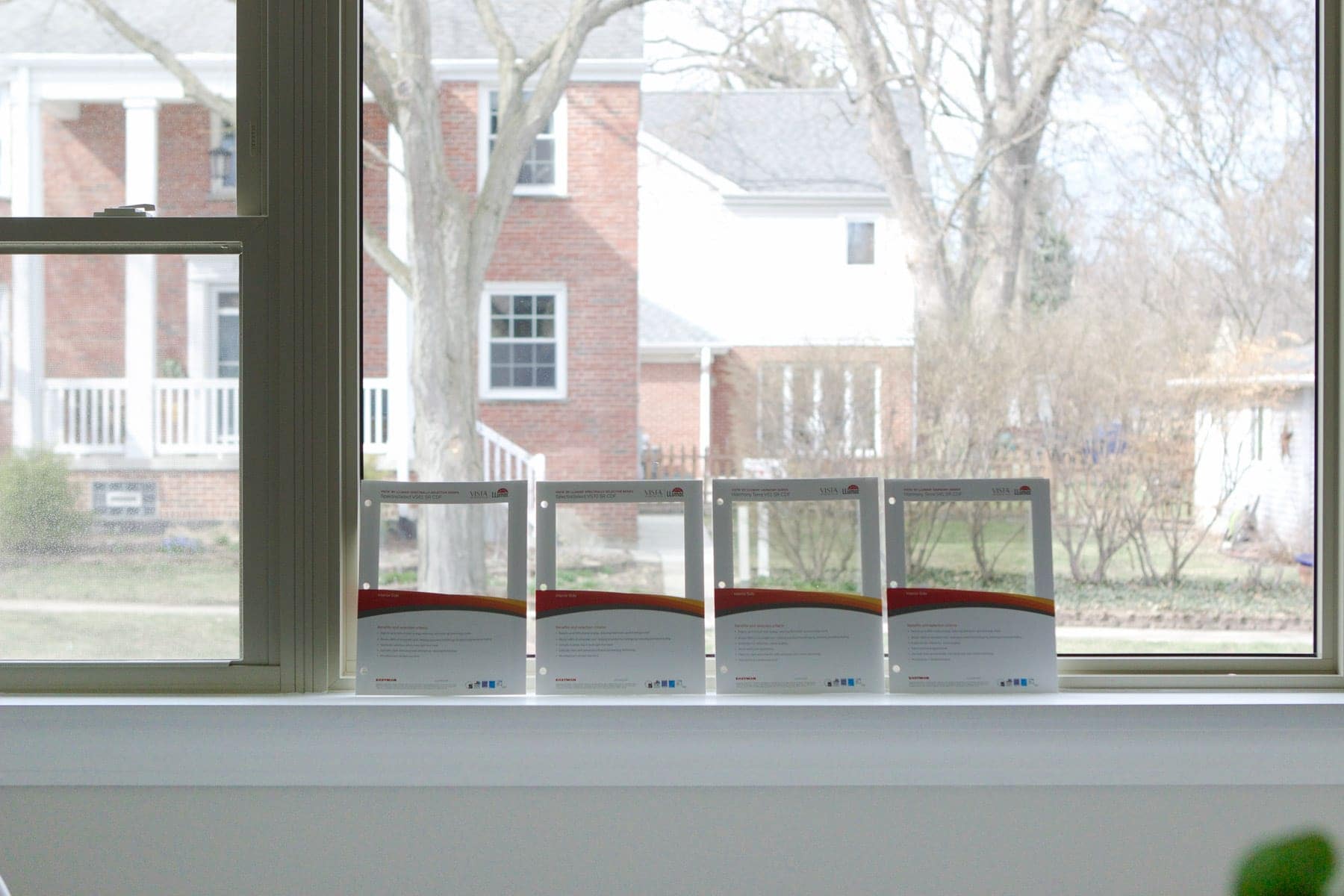 He promised me that I wouldn’t even see the film on the window based on the product I chose. He brought lots of samples and although they looked super dark on my table, he was right — I really couldn’t see a difference when he held them up over the window!

What happens on install day? 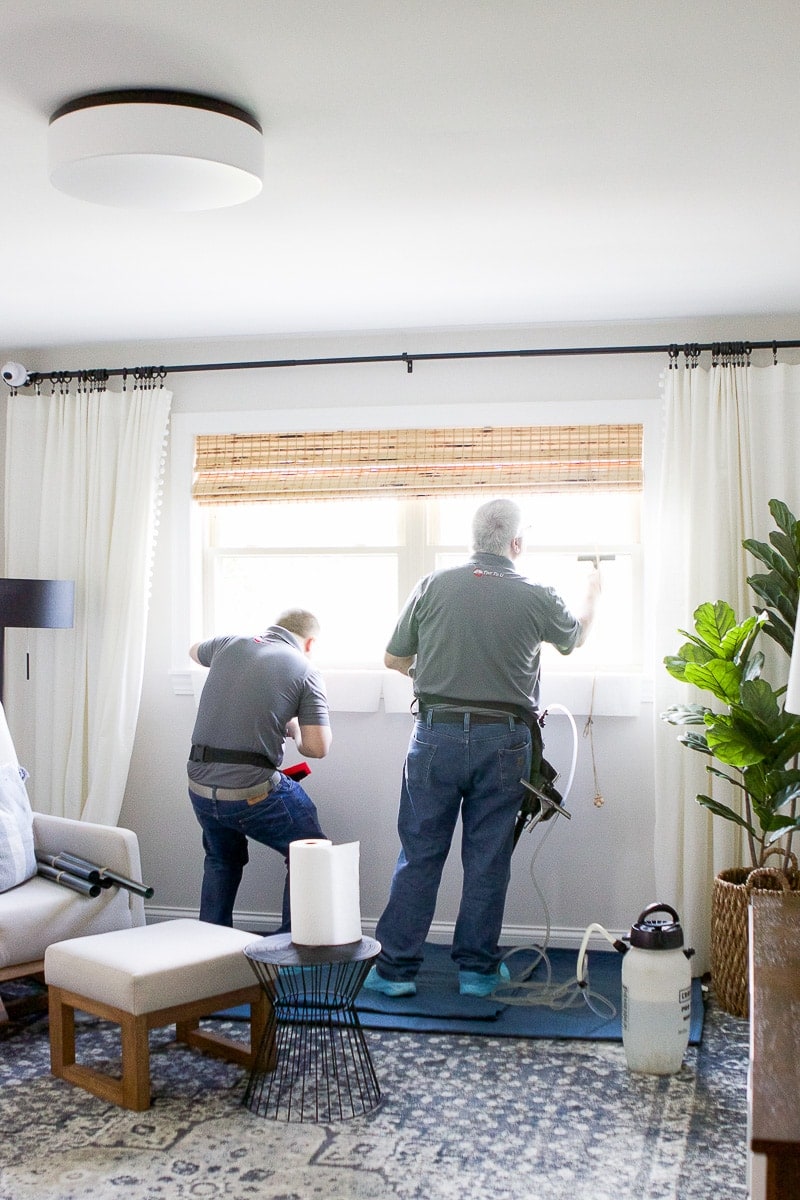 Jeff explained that the day of installation, the installers would handle everything. They would move any furniture, put down drop cloths, apply the film with a water technique, and clean up any mess they made throughout the process. He reassured me that the installation on my project probably would take less than two hours, but of course, the time on each project depends on size/complexity. He also let me know that there was a warranty on the film that kicked in right after installation and would extend as long as we lived in this house!

How much do window films run? My number one priority was to cover the huge picture window in my family room, mostly because we live in that room 24/7. The leather couch sits right alongside the window so I knew this piece of furniture was in danger of more damage if I didn’t take action soon. Plus, Ben sits up there every single day and looks out, so helping to protect him (and his super pale skin) from the UV is important to me. I also decided to do the windows in the nursery for those exact same reasons. Plus, keeping that westward facing room cool in the summer was another selling point. 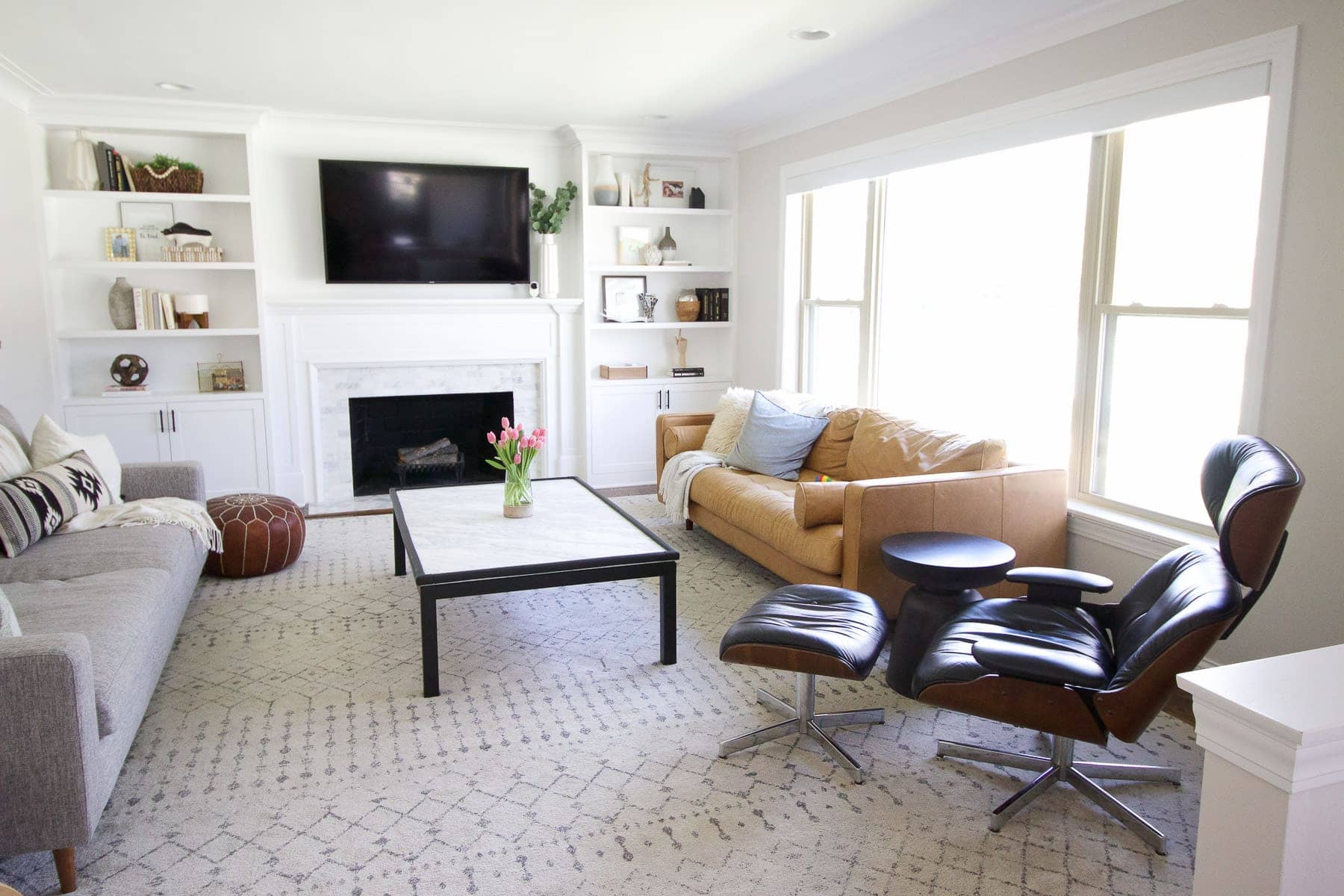 My window films came out to be around $1,200 but every project will vary depending on size, amount of windows, type of film, etc. If you want to get a ballpark figure for your own house, LLumar suggests that the average cost for a standard window (3×5 feet) is $112.50-$180. So you could expect to pay between $400-$600 in a bedroom, which is not too shabby if you ask me!

What are the benefits? 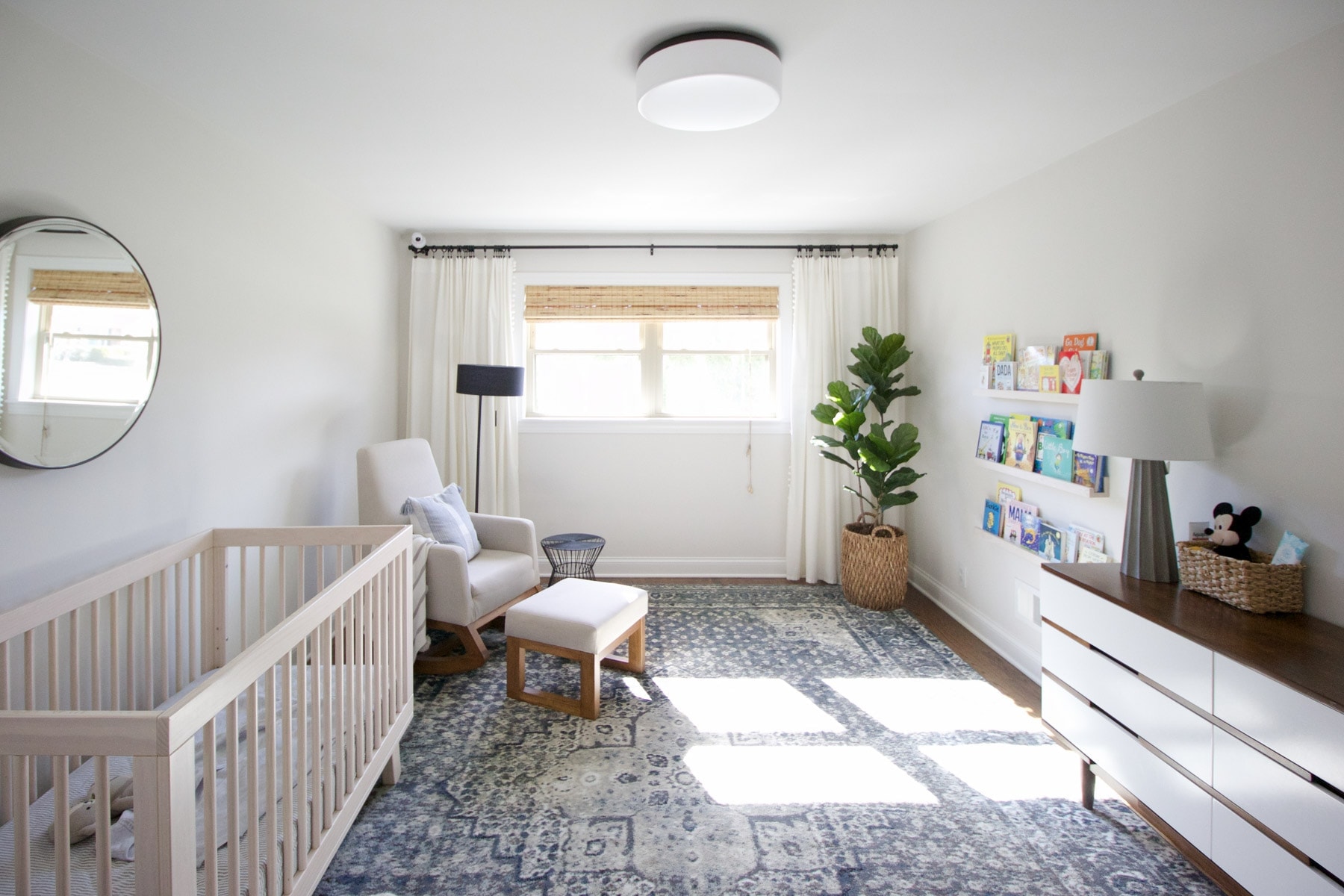 And last, but certainly not least, let’s chat about the benefits of this product… especially since hearing about something like this is very new to a lot of people (including me!). These window films help reduce heat, help reduce glare (a problem we experience while watching TV in the living room), help reduce fading, and provide UV protection. Do you need them in every window of your home? Probably not. But they are extremely beneficial for windows that experience some of the negatives that come from having lots of natural light streaming in, which usually happens in eastward/westward facing windows.

When I was telling Casey about my consult, she was so sad she hadn’t done this to her condo years ago (seems kinda silly since she is now moving). This would have been perfect on the large windows in her main room or the sliding glass doors in her bedroom (both super sunny spots!) 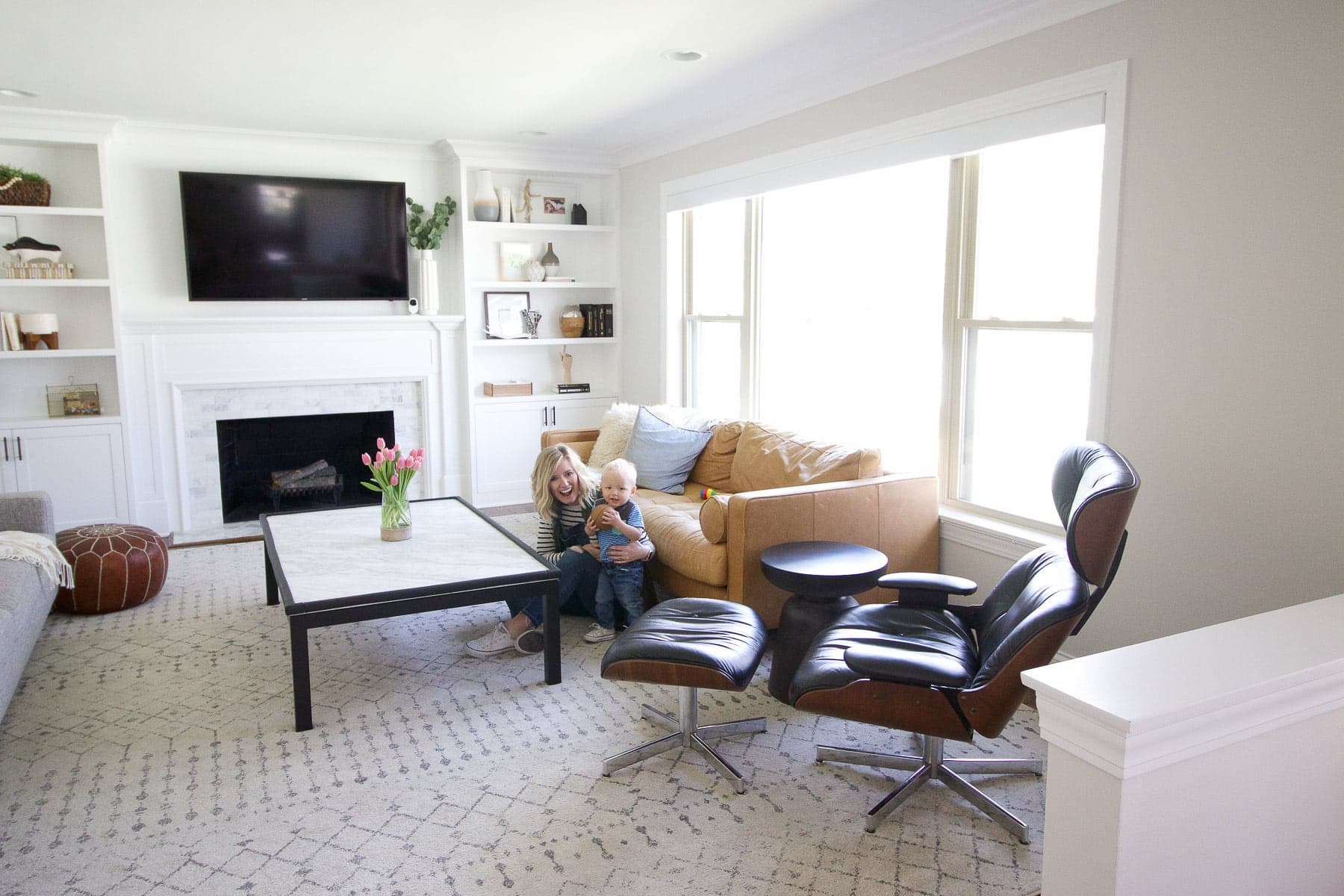 After all of my questions were answered, I was excited to submit my order and move forward. Five business days later (!!), Jeff’s crew was back for the easy installation he previously explained. Since this product was so new to us, we decided to make a little video to document the entire experience while providing you my thoughts about our new window films.

Spoiler alert: I told Casey she HAS to do this when she finds a new place! Who knew something that I can’t even notice on our windows could make such a difference in our home?!

You can view the video below or watch it over on Youtube right here.

Let me show you a little before and after of our living room…because you seriously can’t tell that there is anything on the windows (from the inside or the outside!).

Looks like the exact same picture if you ask me!

So what do you guys think? Do you have window(s) in your house that could benefit from LLumar window films? Anyone else totally new to the world of window films? And who else is just as relieved as I am to hear this magical product secretly protects your home, without looking like your house is wearing transition glasses?!