Our New Ceiling Fan and 10 Tips to Install your Own

Ever since we moved into our condo (about 1.5 years ago…time is flying!), I have been meaning to swap out the ceiling fan in our master bedroom.

It worked just fine but wasn’t entirely our style. The wood matched the color of our hardwood floors before we stained them darker. So this light wood fan just didn’t really seem to go with anything else in the house.

At night I would lay in bed and stare up at it thinking, “I have to get a new fan!” I would also think, “Dang. I need to get up there and dust. I can see the dust bunnies from down here!” My least favorite place to dust…

Well, I’m so happy that I finally followed through on this task and we now have a new ceiling fan! I’m not gonna lie, I had every intention of making this a “How to Install a Ceiling Fan” post. But then once I installed it and realized how many steps there are…I decided to just offer some of my tips and tricks that I learned along the way. Plus every ceiling fan will come with a different set of instructions, so I figured a step-by-step tutorial on how my fan was installed might not be as helpful.

I’m not gonna sugar coat it, this was by far the most challenging electrical DIY project I’ve tackled. It wasn’t necessarily super difficult…but it was time-consuming, hard to lift up a heavy fan to the ceiling, and there were so many wires to connect.

But with that being said, this is definitely a DIY project that you can tackle if you feel comfortable working with electrical. Bridget and I have installed light fixtures, swapped out outlets, and installed new light switches…so I felt okay trying this project myself. However if you are nervous, or if this is your first electrical DIY, then I suggest calling in a pro. Safety first, right?!

But for those of you interested in DIY-ing this installation, here are my top 10 tips.

Tips to Install a Ceiling Fan by Yourself 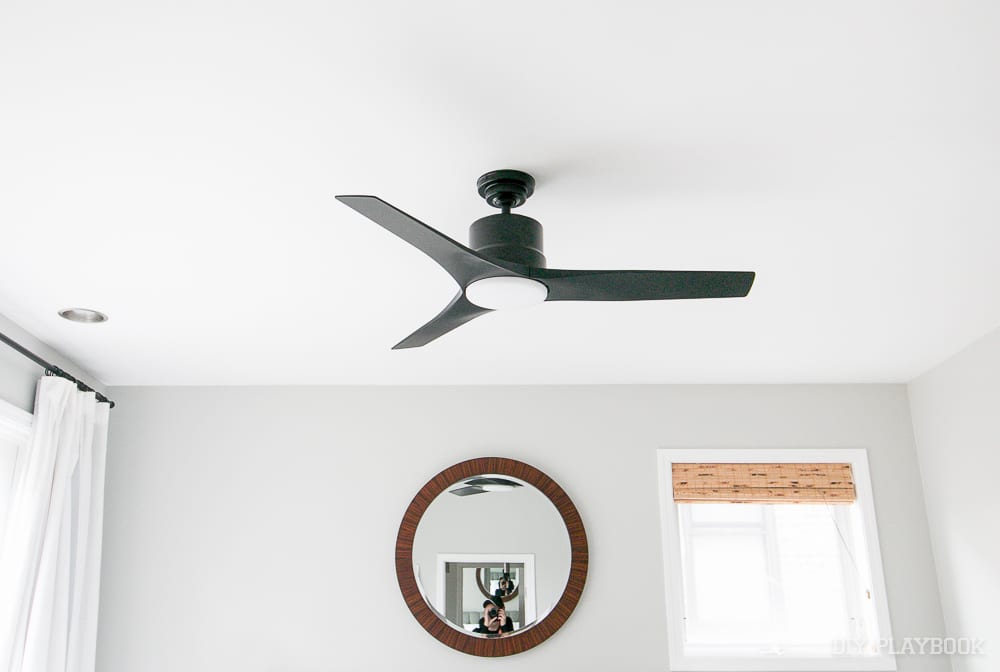 First, find the right sized fan for your space. The bigger your room, the bigger the fan you’ll need. Here are some general guidelines…

We ended up going with this one from Lowe’s because we absolutely loved the sleek look and the matte black finish. It’s contemporary, simple, and classic. I actually first found this fan when we ordered it for our Lowe’s Home Makeover. I loved it so much and vowed that when we changed our own fan I would get this one!

Make Time During the Day

I assumed this project would take about 1 hour from start to finish, but I definitely underestimated the time. Give yourself at least 2-3 hours of uninterrupted time to get this project done. I also advise doing this during the daytime since you will need to turn the power off in the room and you’ll need light to see what you’re doing!

When it comes to DIY projects like this one, I often prefer to work alone (or sometimes with Bridget). However, this is definitely a 2-person job. You may need someone to hold the old fan while you disconnect the wires, you’ll need a helper to hand you things while you’re up high on the ladder, and you’ll want a buddy to help you lift up the new heavy fan to the ceiling.

Finn graciously helped me out for this project on a Sunday afternoon. It was the only afternoon we had available to get it done, and he was sweet enough to pause football to help me out. I told him it wouldn’t take more than an hour and he agreed. Obviously, it took much longer than I told him (see tip above…), but he was a trooper.

I often like to dive right into a project and figure it out as I go. But this is not the time to be doing that. Instead, read the directions that come with your fan completely from start to finish before you even get going. This will save you a lost of time & frustration later on #trustme

Layout All the Parts

Make sure you get out ALL of your supplies before you get started. Open the box and layout all of the supplies neatly, and be sure to have all of your DIY tools on-hand too (including a flashlight!) We made the mistake of putting out the supplies on our kitchen island, instead of near us in the back where we were doing the project. This resulted in a lot of back and forth from the kitchen to the bedroom. Learn from our mistake and keep all supplies nearby and neat!

Turn Off the Power 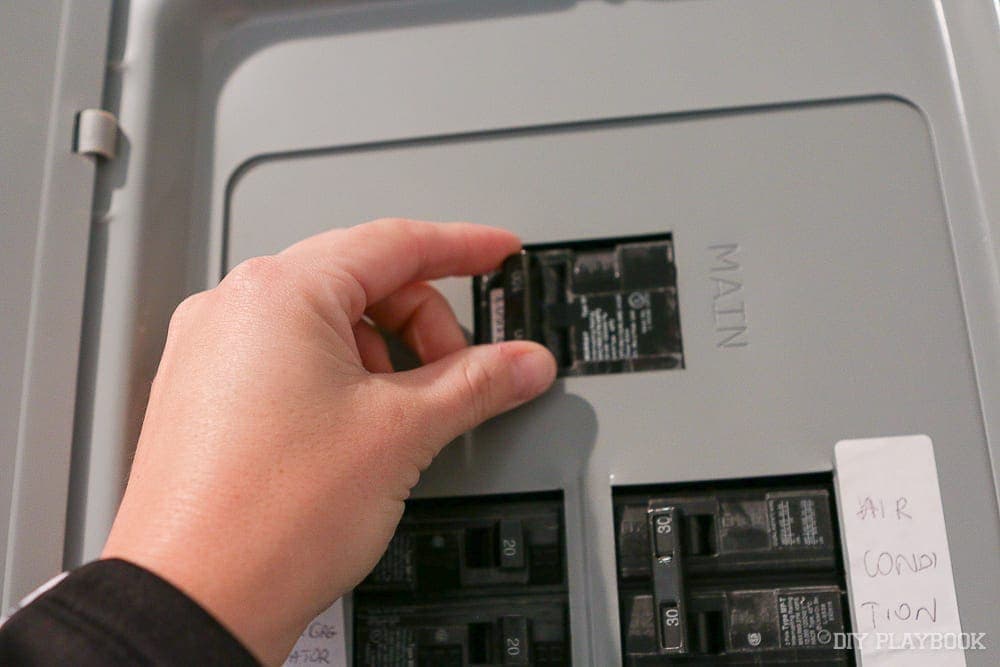 When I do electrical projects, I often get kinda scared and turn off power to the entire house so there’s no chance of getting hurt. However, because this was in the middle of a winter day, we didn’t want to turn the heat off, the DVR off (remember…it was a football Sunday), or the oven (food was in there cooking away!) Instead we just shut off the power to the bedroom and carefully tested to make sure the wires were safe. Whichever method you choose, just be safe and double-check that there is no electricity flowing to your work area.

Be Prepared for an Arm Workout

Because you’re up on a ladder…holding heavy objects…reaching up towards the ceiling, you’re bound to get in a very good arm workout with this DIY project. My arms were burning by the end of this one. Not only was it a bit hard to hold the new & old fans when they weren’t connected, but just tightening screws with your arms over your head is a burner! No visit to the gym needed on install day. Yes!

Get Ready to Drop Things

I can’t even tell you the number of times I dropped a tiny screw or wire cap while doing this project. When you’re up on the ladder trying desperately to screw things in, you’re bound to drop things. So just know that it’s totally normal & okay.

I did get pretty frustrated with this project, and I want you to learn from me and ease up a bit. All I wanted was for this dang fan to be installed, and the small setbacks of dropping items really made my blood boil. But that meant that I was tenser when screwing things in and wasn’t 100% paying attention..which resulted in more mistakes. Instead, take a breath and keep moving forward. You got this!

Invest in a Wire Cutter

My toolbox didn’t have a wire cutter, but I ended up purchasing one for this project. This is a must as you’ll have to shorten lots of the wires from the fan to connect to the ceiling wires. So be sure to pick one up from the store before you get started! 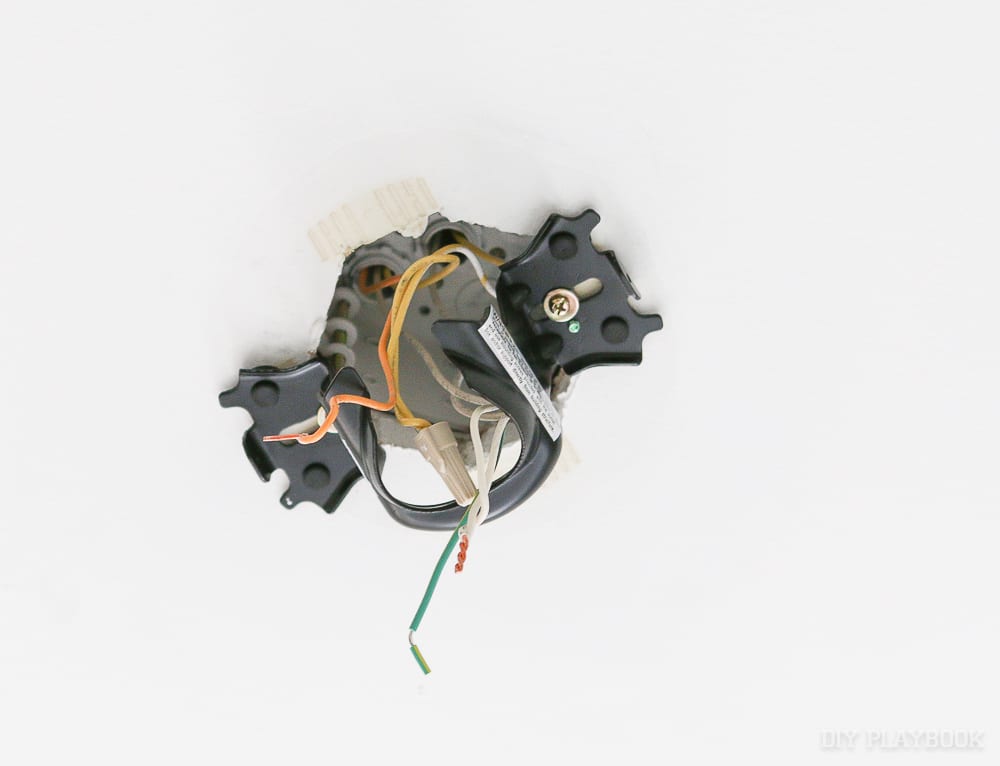 Because you’re connecting wires from the ceiling, the light, and the fan there will be tons of wires to connect. Be sure you’re making tight connections and really twisting your wire caps on. I had 1 loose connection between some of the wires and when I went to turn on the power to see if the fan was working, nothing happened! Once I took everything off again I realized it was because one of the small wires had slipped away. Make tight connections for a successful & safe install!

Choose the Right Direction for the Season

Our new fan came with a remote that controls the light, fan intensity, and direction of the fan. Did you guys know that you should change-up the direction of your fan depending on the time of the year? Yep, crazy right?! In the summer, have it spin counter-clockwise to move the air down to cool your room. In the winter, have it spin clockwise to draw air up and force warm air down #whoknew 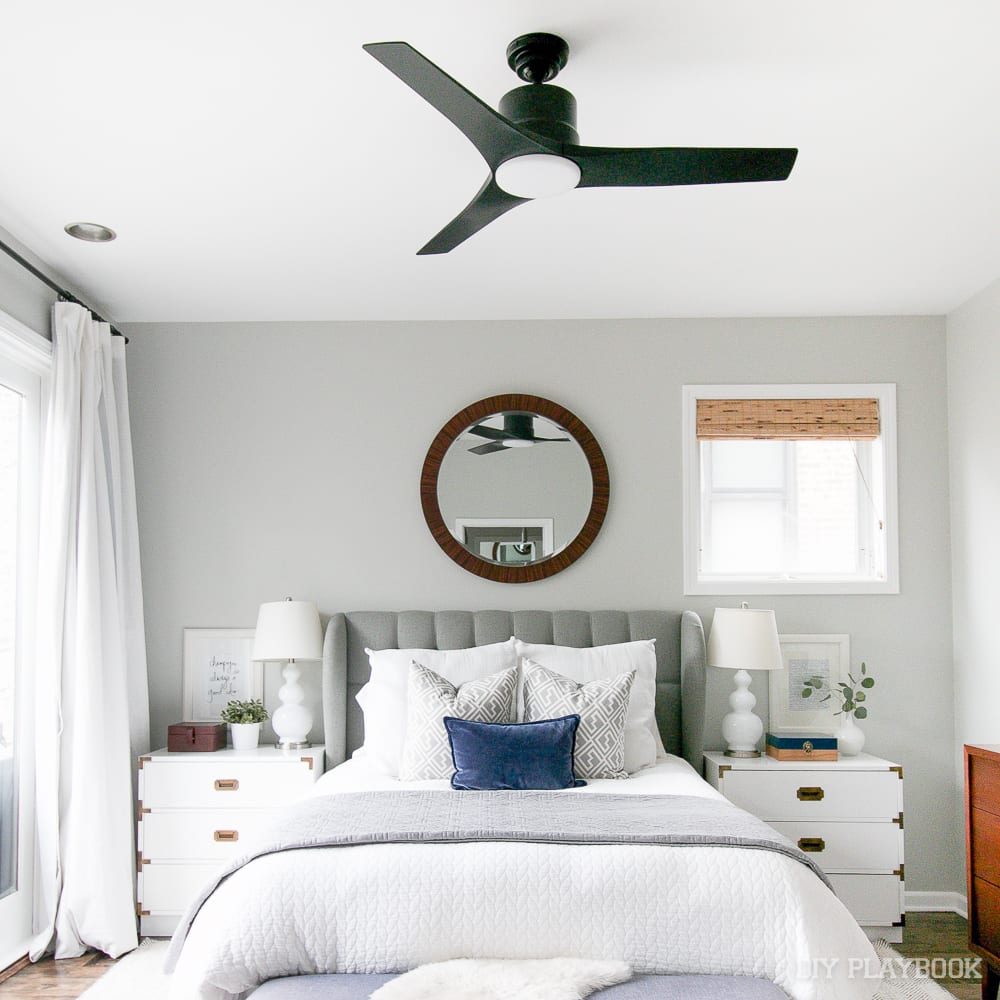 Even though it wasn’t the easiest DIY project I’ve done, it was one that was well worth it. I am in love with our new sleek fan, and it has really upgraded the entire look and feel of our space.

But it doesn’t just look good, it works really well too! It’s practically silent and doesn’t wobble at all when the fan is on full blast, and the LED light really brightens up the room.

I’m so happy to finally cross this task off our new home to-do list and couldn’t be happier with our purchase! Plus, this touch of black has me eager to add in a few more small touches of black to this space. Nothing crazy…but I’m thinking of a couple of ideas to incorporate this classic color into our master bedroom space.