As you probably know by now, Finn is the main chef in our household. I’m not the best cook and he really enjoys spending time in the kitchen. In our condo, he would spend all day Sunday prepping food for the week and then make a delicious Sunday night dinner. He would turn on the TV in the family room so he could watch football while preparing food for hours. It was kind of his happy place. Well, in our new house the television in the family room is far from the kitchen. That’s totally fine for normal TV watching, but not ideal for Finn’s love of cooking and watching sports at the same time. During those first few months of living here, he really didn’t cook very much. He tried to get into his Sunday routine but he was constantly running back and forth from the kitchen to the family room to catch big moments in the game. Instead of putting a huge flat screen in the kitchen, we settled on a Samsung Frame TV. And just so you know from the start, this is in no way sponsored (Samsung has no clue who I am. Ha!). I’ve just gotten so many questions about the TV on Instagram stories and figured I would share more in a full blog post. 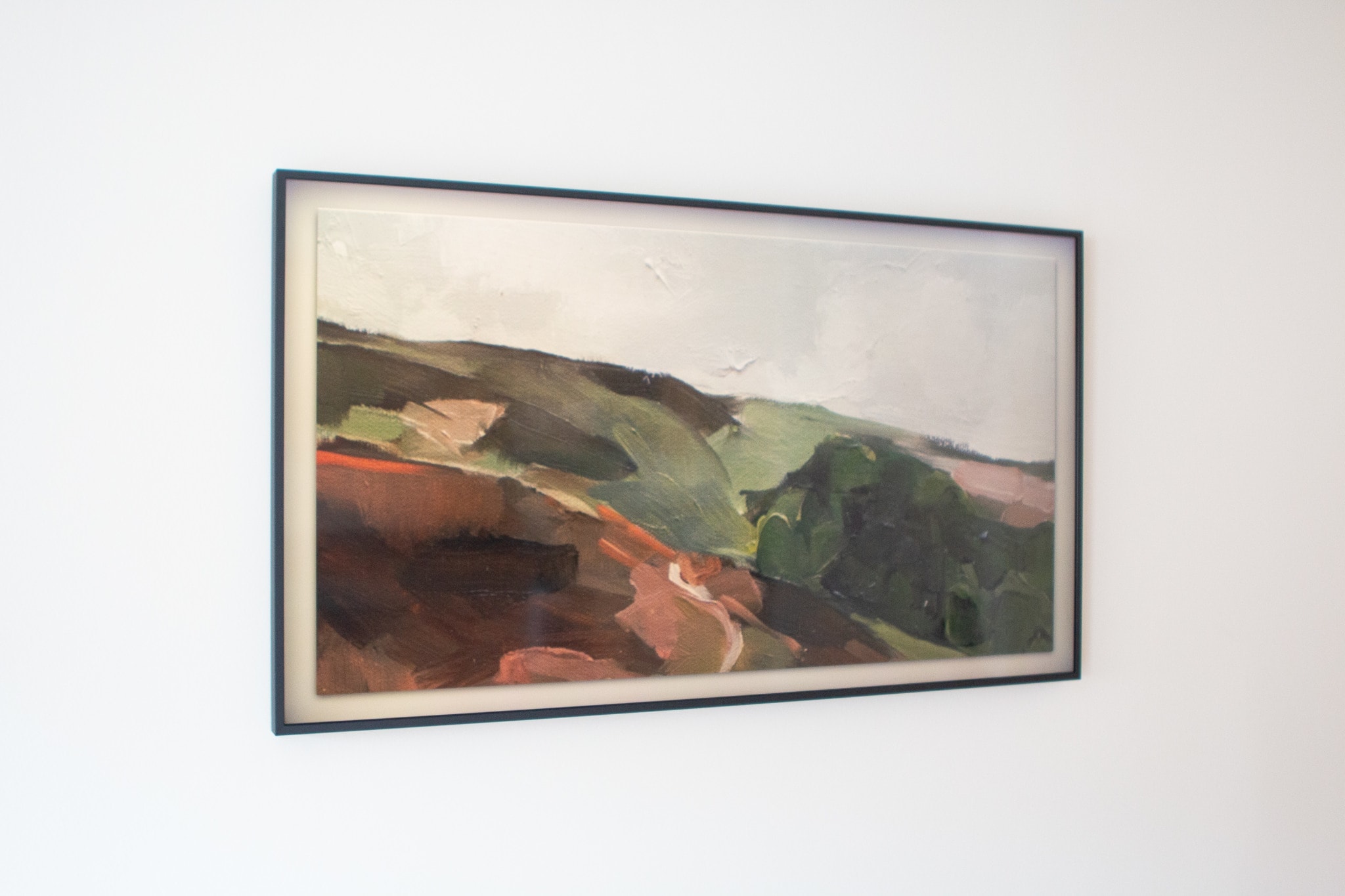 I have seen the Samsung Frame TV all over the place, and my brother, Harry, has one, so I have always loved this genius product. It solves the problem of having a huge black box in an otherwise nicely-designed room. I figured this was the best solution for our kitchen because we had a big blank wall and putting a honking TV on it was going to be an eyesore. At least with the Samsung Frame TV, it would look like a nice piece of art when not in use.

Buying & Setting It Up This TV definitely isn’t cheap. We hemmed and hawed over buying it and finally pulled the trigger on Black Friday! We ended up getting a good deal on Amazon. If you’re interested, I would keep an eye on it, as it goes on sale every now and again. We bought the 55″ television with a black frame. I would have done a wood frame (love that one the best), but with our beige kitchen and wood floors, it just seemed like a lot of wood going on! This store also carries more ornate frames if you don’t like the basic options from Samsung.

Once it arrived, we realized that we had a problem. The TV comes with a box that needs to be connected to the TV in order for it to function. Most people place the box in a console underneath the TV and then it’s totally fine. Since ours was on a big blank wall, we didn’t have anywhere to place this box.

Luckily, Finn came up with a plan to hide the box in our storage room directly beneath the TV. We tested it out and realized that the box would still work even on a different level of the house. 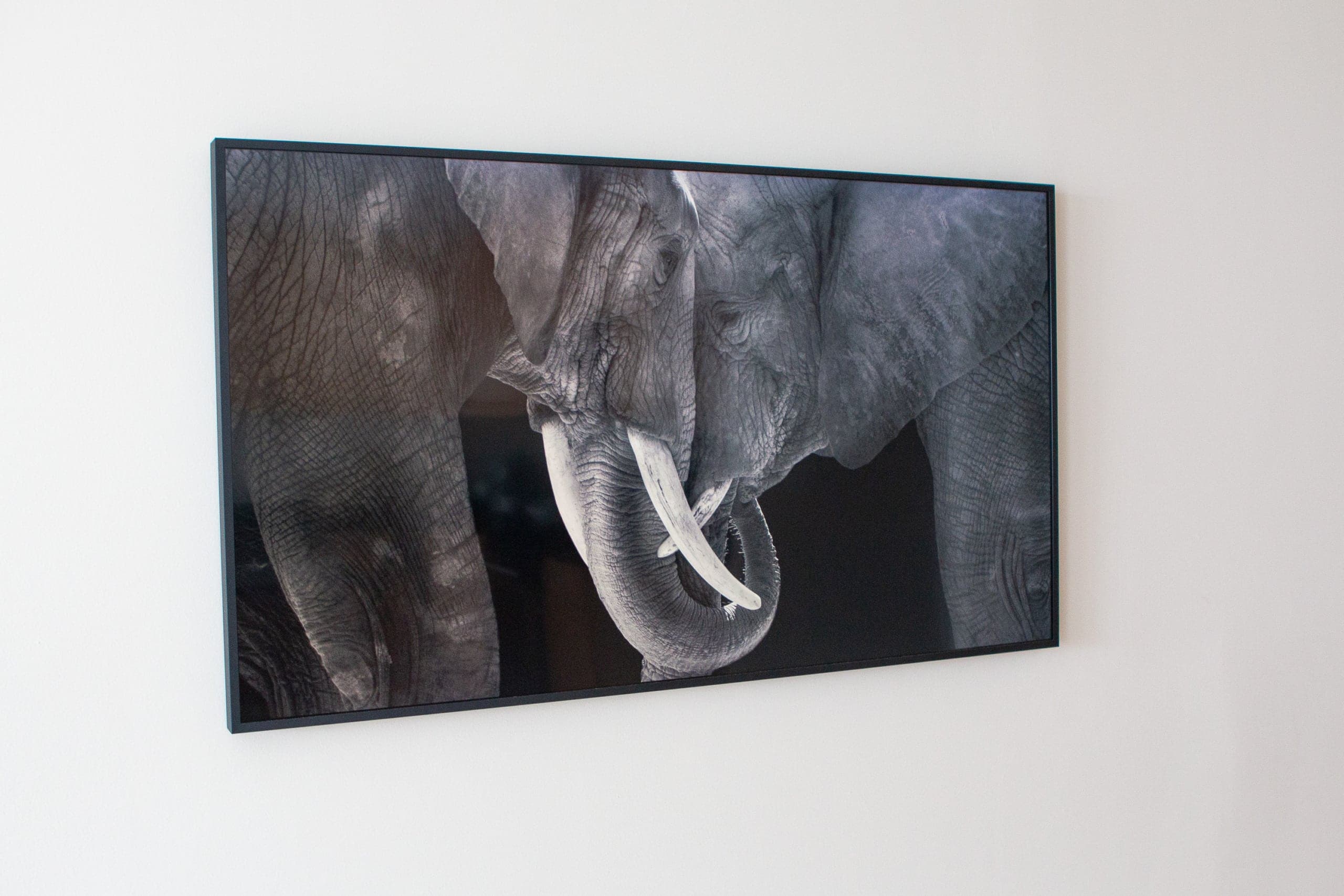 I don’t have a tutorial on how we did this because, honestly, we were just figuring it out as we went! Essentially, we drilled a hole in the wall behind the TV and dropped the cord behind the wall, in between two studs, until it hit the floor in the wall. Then, Finn drilled a hole into the ceiling from the basement to pull the wires through. Somehow this worked! If you just want to hide your cords and plug into a box inside a console, it will be a heck of a lot easier. You just drop them behind the wall (if you have drywall) and pull them out in a hole behind the console.

Update: We added a Frame TV to our bedroom and documented the entire install process. You can find the entire step-by-step tutorial for hiding the cords in this blog post.

How Does The TV Work? 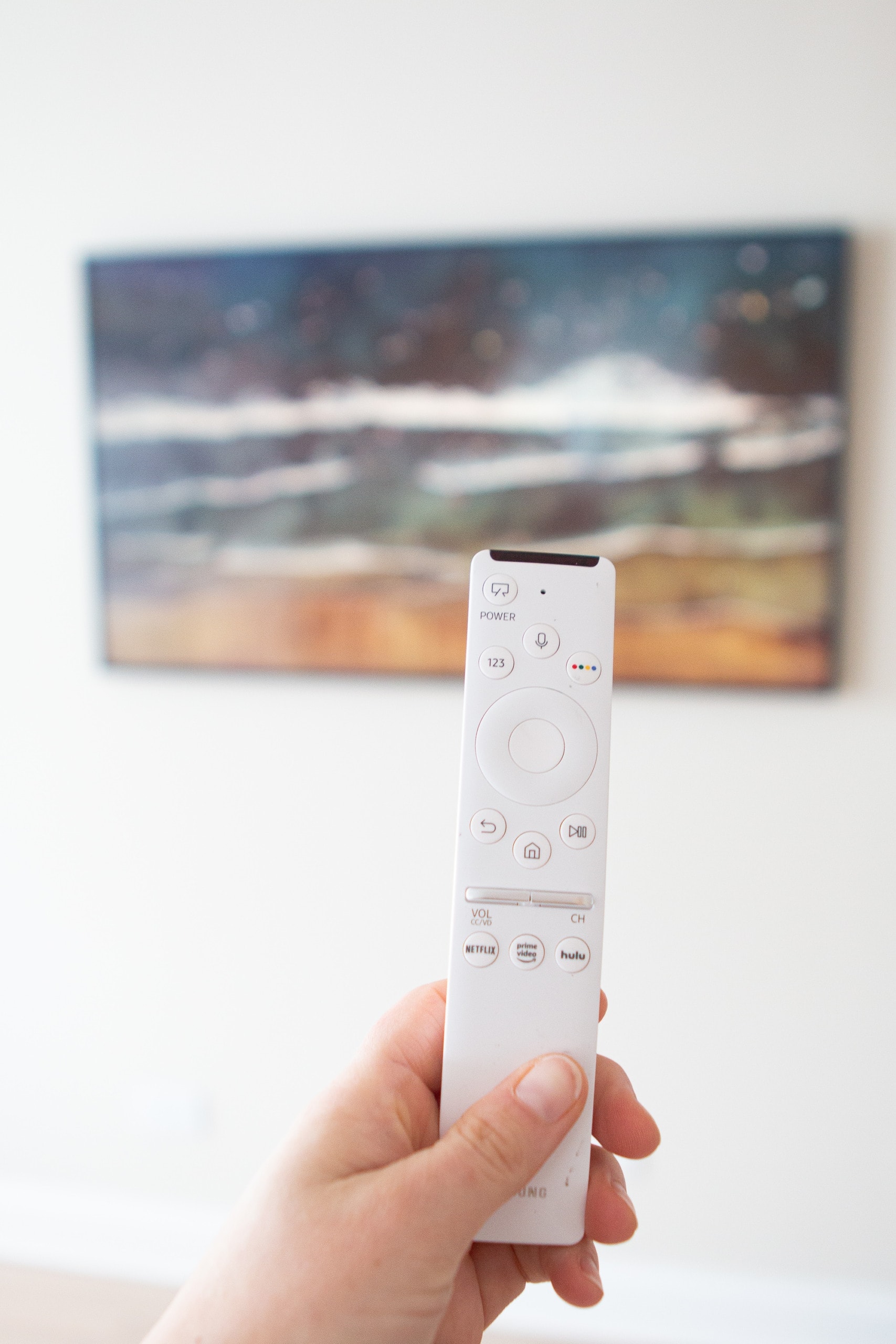 It works just like any other TV. You have a remote and you turn it on. It’s also a “smart TV” (as most are these days) and it connects to all of our streaming services (Netflix, Apple TV, etc.) through wifi. 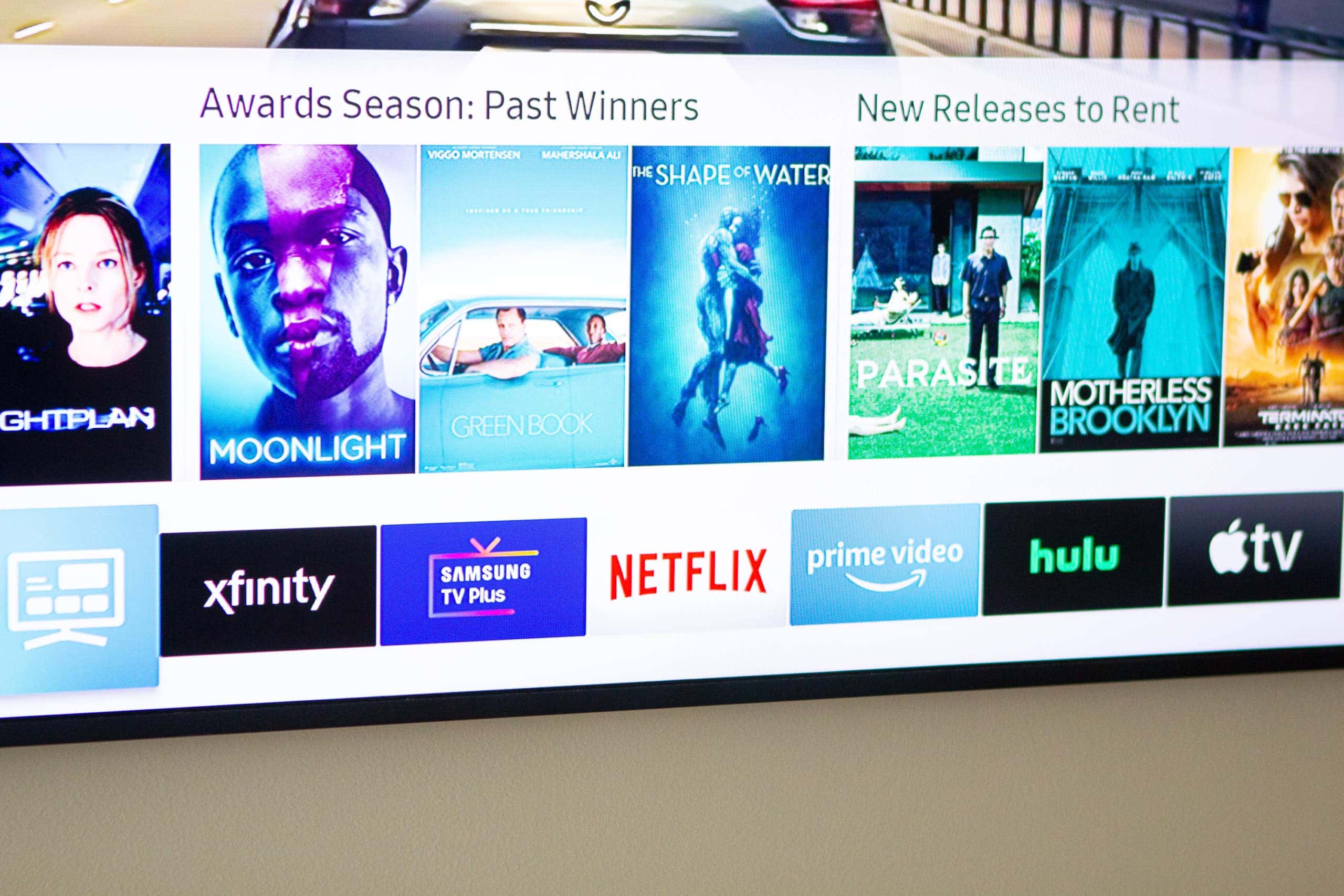 We also have it set up to our cable so we can watch any channel, just like we would on our living room TV.  I didn’t know if the picture would be that great, but it’s actually really nice and clear (although I’ll admit, I don’t know much about that stuff!). 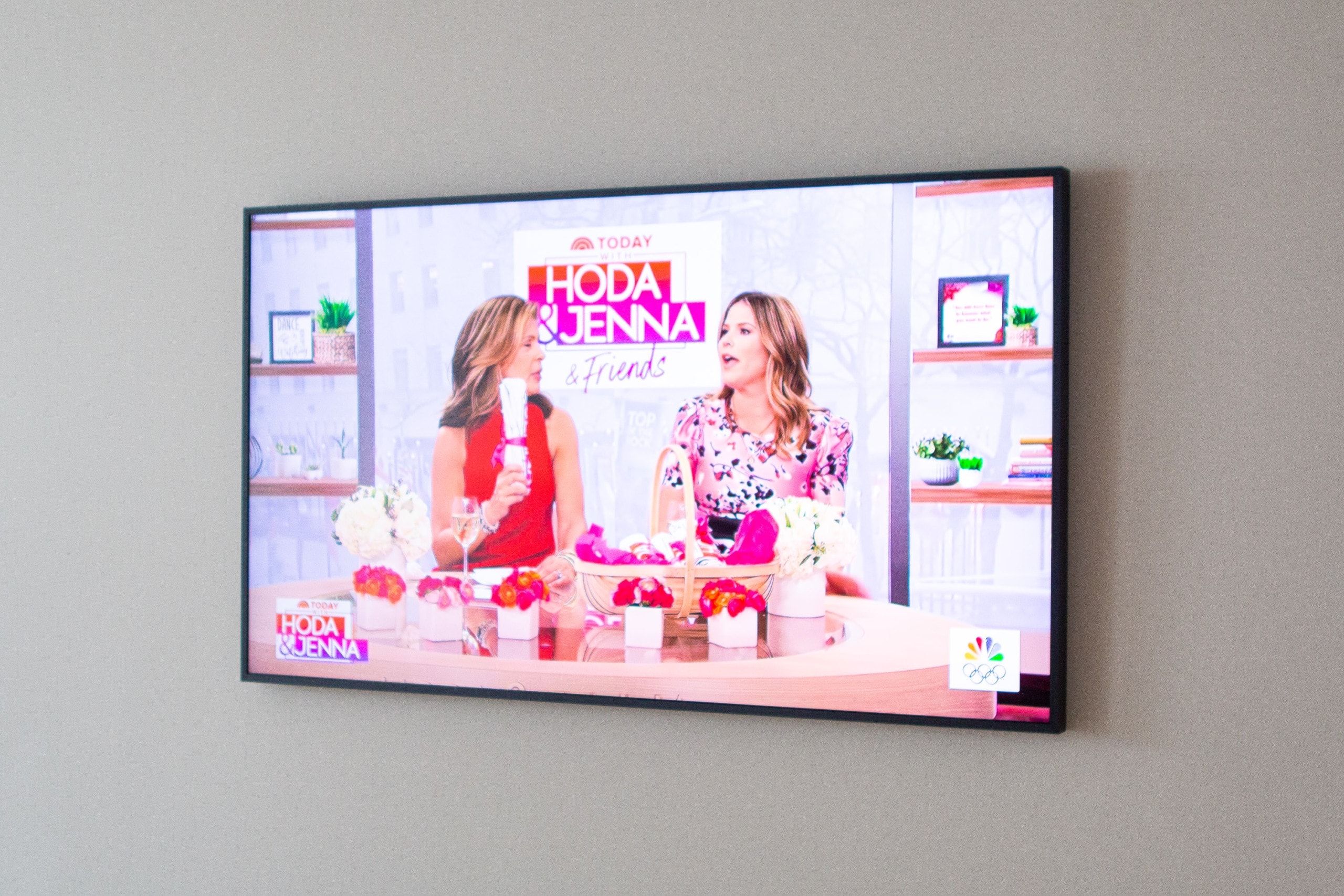 When you turn it on, it can either go into TV mode or art mode. We pretty much only have the television on when Finn is in the kitchen cooking. The TV emits sound, but he directs the audio through our Sonos speakers in the kitchen ceiling for better sound quality.  (You will find more about our Sonos setup in this blog post).

How Does Art Mode Work? 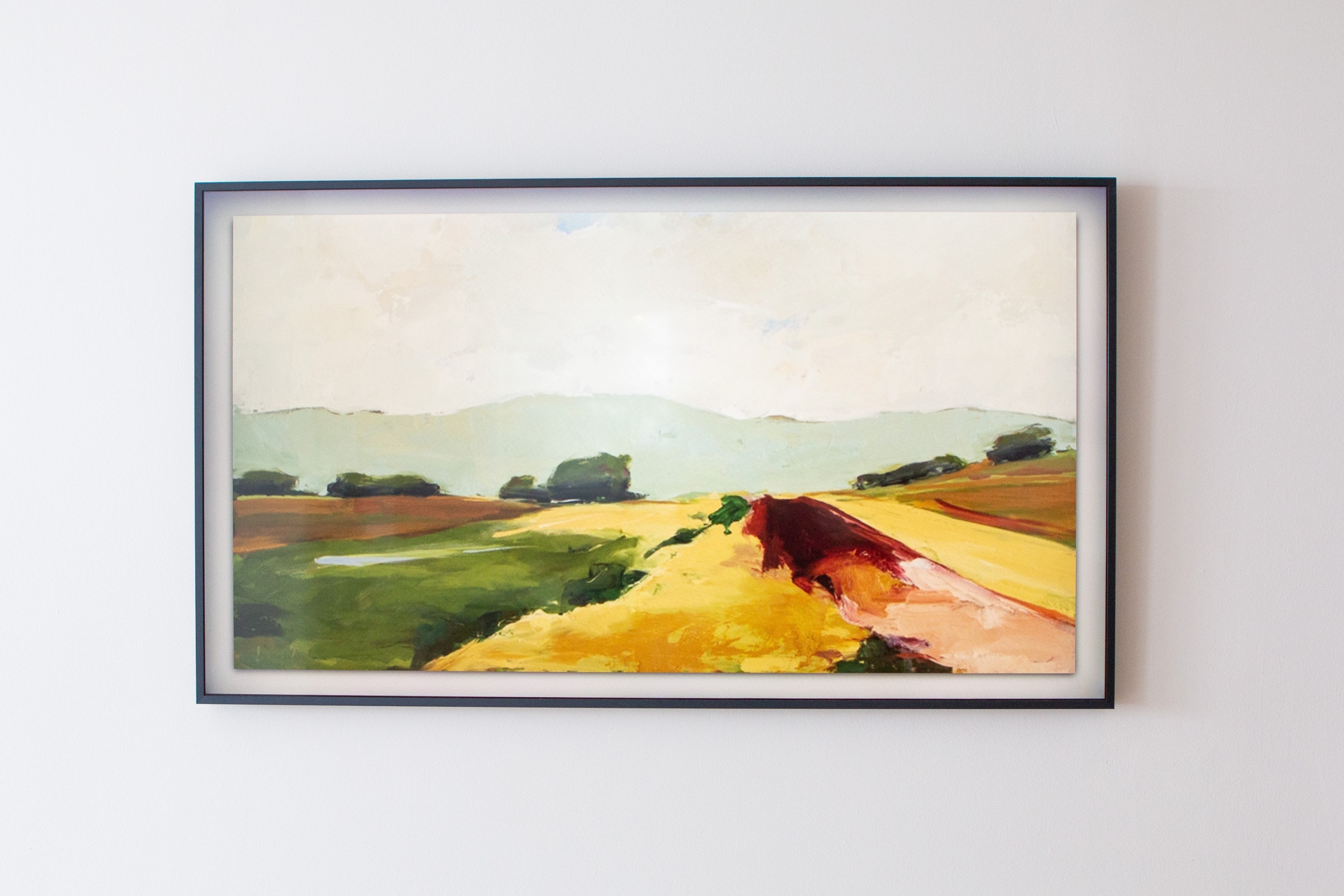 When the TV is off, you can use the option for art mode. And it really does look like art…not a bright pixelated screen. There’s a brightness sensor that automatically balances the screen’s brightness, depending on the time of day. The TV also comes with an app called “SmartThings” that you connect to your TV. You can then change the art and settings directly from your phone. We ended up signing up for the “Art Store” which is $5 a month and gives you access to thousands of pieces of art. Or, you can buy art individually if you don’t want a monthly subscription. I’ve spent some time going through and “liking” some of my favorite pieces so I can easily access them and put them up on the TV. But I’ll admit, I don’t use this feature as much as I probably should. (Note: In writing this post, I realized that you can “favorite” art and then set it up to change whenever you want. I have mine changing every two hours and it’s great). You can also upload your own pictures or art onto the TV, directly through the app. I’ve actually purchased a few pieces through the Juniper Print Shop that I save on my phone and then upload to our Frame TV. It’s a very cool feature, but again, one I don’t take full advantage of. I think it could be fun to take pictures of your kid’s artwork and display it up there – and it would lead to less clutter around the house. A few people on Instagram were concerned about energy consumption with the art being displayed continuously. There’s actually a motion sensor on the TV so the art displays when you’re around and it turns off when you’re not around. We use that feature and it works well for us. 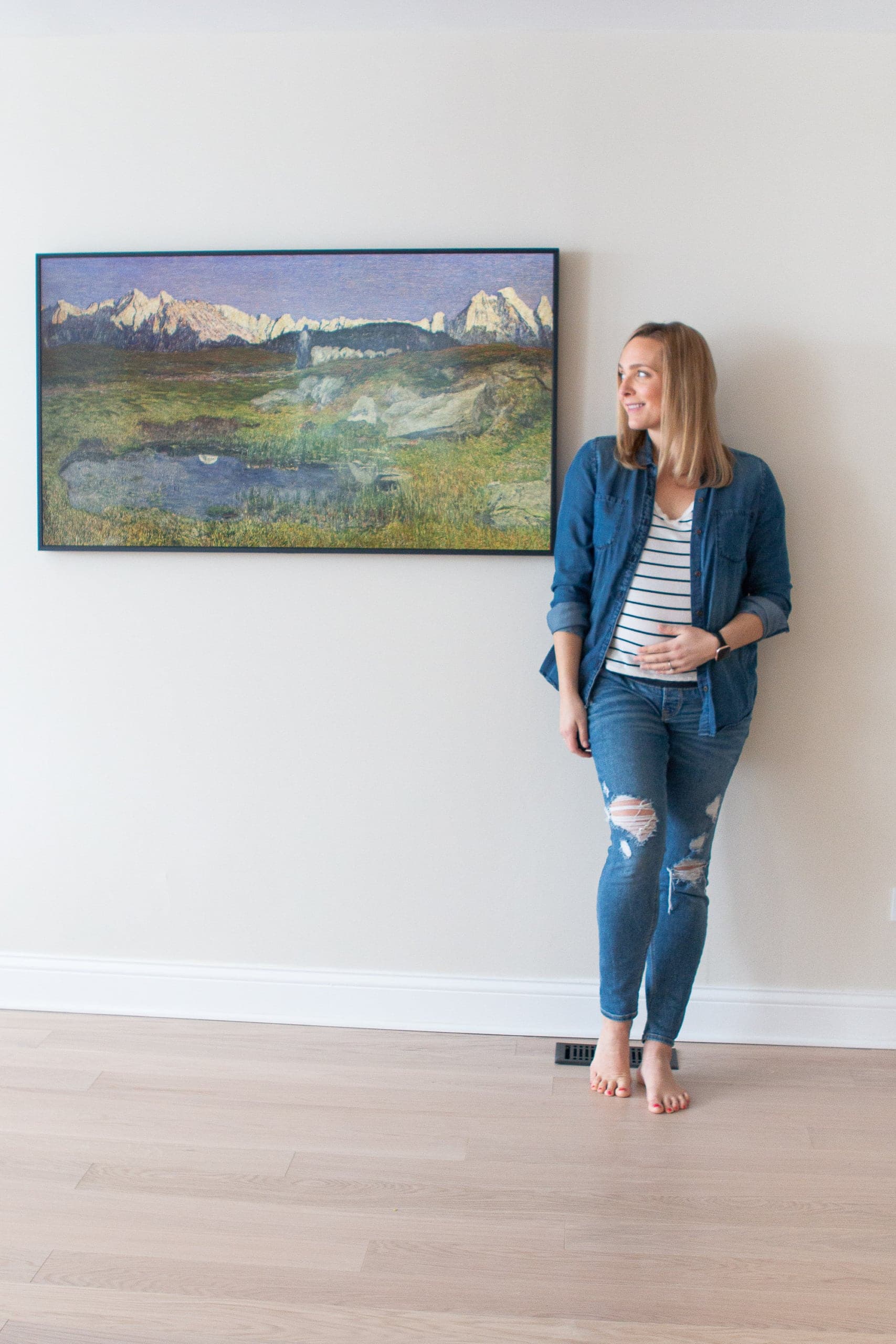 I think if you’re in need of a new TV, then this is a great option! For us, it was the perfect compromise. Finn got the TV he wanted and I got the look I wanted. We both won! If you just want a tv and don’t care about the “art look”, then it’s definitely a pricey product and one that you may not need. If you do opt for it, I would also have a plan for the box that comes with it because that was something we completely overlooked. I’m not totally sure what we’ll do when we renovate the kitchen, because my guess is we’ll be adding cabinets to this side of the room. Somehow, we’ll have to keep a TV in the kitchen or else I may starve because Finn won’t be cooking. Ha, seriously though! P.S. We’ve renovated our kitchen since this post first published. You can see how we incorporated the Samsung Frame TV into the new space above. Everyone thinks it’s real art. You can find all of the details about our new kitchen in this blog post. And here’s a look at the Frame TV all set up in our bedroom (notice, no cords or wires to be seen). For more details about that process, head to this blog post. 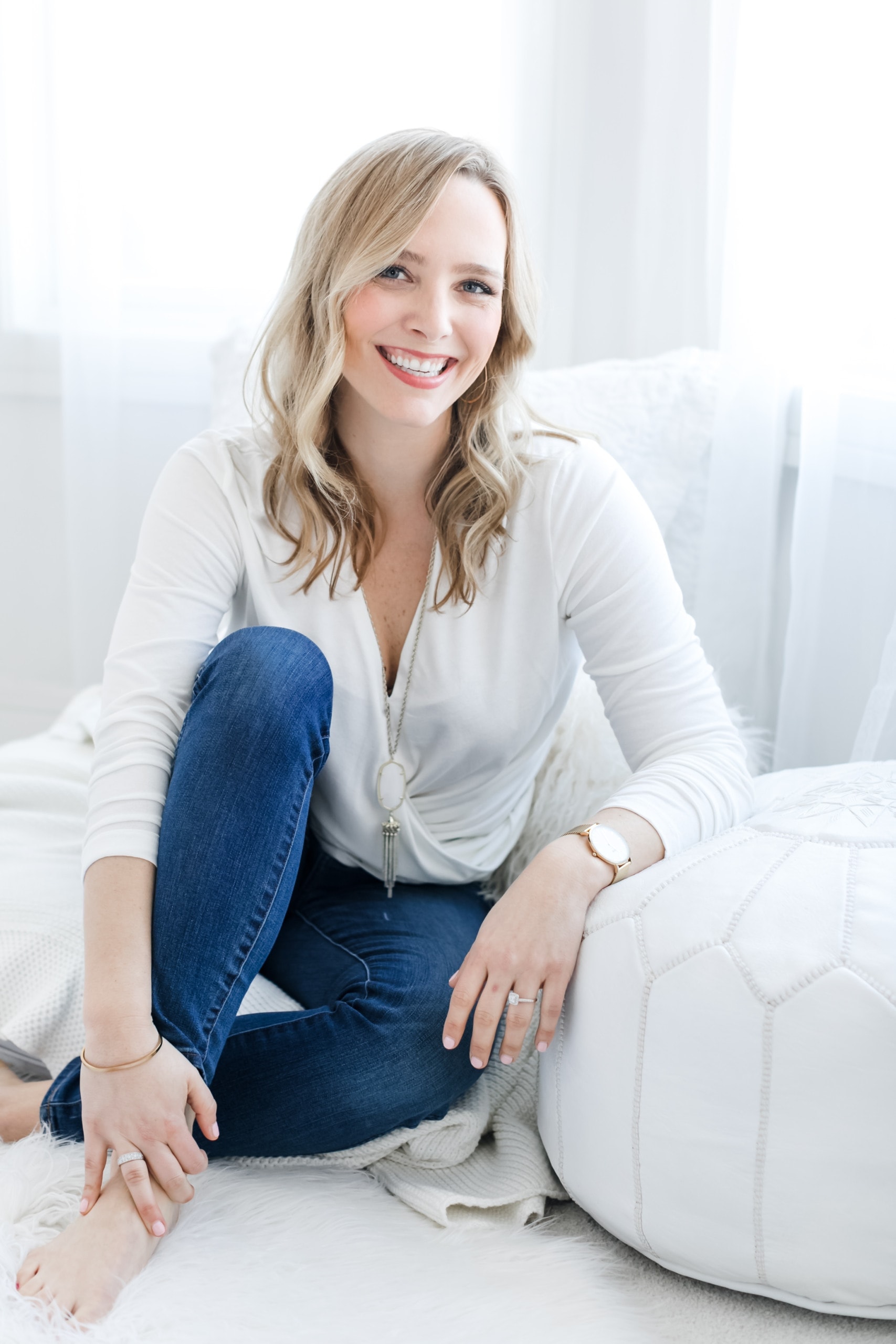