How to Hide a Printer

Real talk: I’m pretty freakin’ PROUD of today’s super simple DIY solution and I’m 150% confident that you could recreate this look in your home with ZERO tools from the garage. If you have a kitchen knife and a wicker basket that fits your printer, you can do this!! <— finding the perfect basket is actually the hardest part of this project. Here’s how to hide a printer! 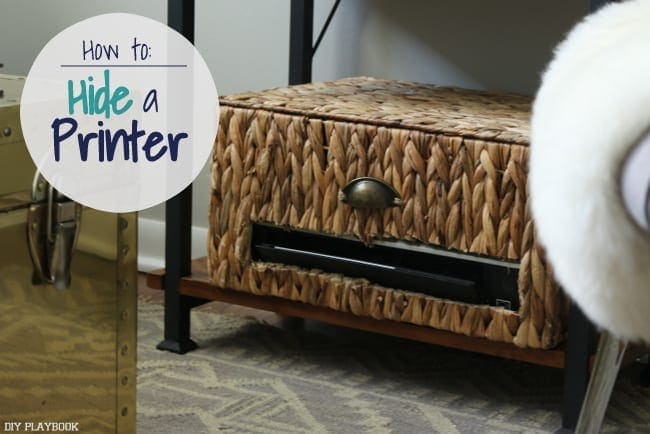 The first thing you need is..the basket! I scored this basket at HomeGoods, and there were dozens of great basket options in their storage and organization aisles. to I liked that this one had a lid on it, but any basket could do the trick depending on your space/printer.

This is actually the first printer Matt and I have ever had in our house. Casey has been on my case to buy a printer for some time now and I’ve successfully resisted… until this summer.  Who wants a clunky printer in their house if they’re surviving without one just fine?

Eventually, I had to break down and buy one so I could uphold some DIY Playbook responsibilities. I went with the smallest one I could find, which happens to be the same one Casey has. It’s a printer, copier and scanner all in one plus it’s CORDLESS and works on WiFi. I must have been out of the printer game for quite some time because I had no idea that there were wireless printers…. and for less than $100?! Where have I been?! Although this printer is pretty petite, I still wasn’t a huge fan of having it exposed in our office if there was an alternative option. A little time in HomeGoods and a little knife carving later… I was able to seamlessly incorporate the printer into our decor. 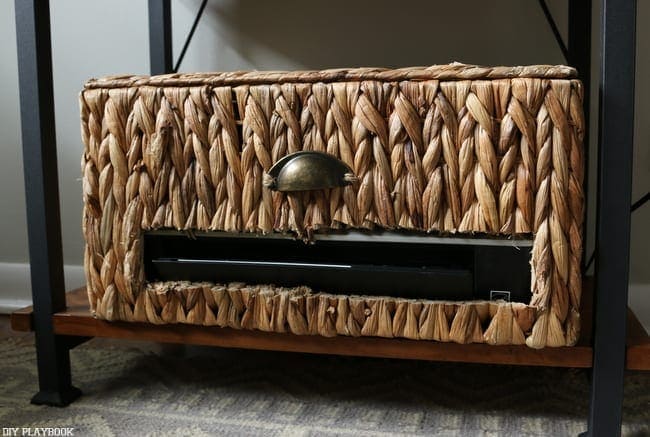 I should have taken some before pictures of the basket, but I wasn’t planning on blogging about this project because I wasn’t too confident that my crazy idea would actually work. But it only took about a half hour and the printer was pleasantly camouflaged. Here are the super simple steps I followed to hide the printer.

How to Hide a Printer

Get a basket that fits your printer and put the printer inside of the basket. Mark exactly what areas need to be removed from the basket (ie. Place where paper is released after printing, place for your electrical cord to feed out). My college culinary professor would probably shriek if she read this next part. Sorry Professor Rhodes, a DIY-er has got to do what a DIY-er has got to do in order to hide that eye sore. Take your kitchen knife and CAREFULLY cut through the wicker basket. The wicker should cut pretty easily, just be careful you’re not cutting on an angle or outside of the “lines”. I then took some scissors and cut the “fringe” that was left from the wicker cut leaving a clean-cut line. Not so pleasant surprise: there was a wire running down the middle of the wicker basket that I needed to cut in order for the paper to feed out. I took some wire cutters and cut it just enough so that the paper could slide out. (this is a photo of the wire in the back, I kept that one but the front one looked the exact same) Place the printer in the basket, make sure everything lines up, fish the cord through the back, and you’re in business! I cut out the whole back of the basket… at the time it felt like the right thing to do. Unnecessary. However, it did help me practice cutting before tackling the front of the basket, which I guess was helpful. No harm, no foul. Plug that puppy in and you’re done! Literally D-O-N-E and hopefully feeling as proud and excited as I was (and still am)!!

Every time I send something to the printer I’m once again amazed that I don’t need any cords from my computer (genius invention!). And when I go pick up the paper that magically popped out of a wicker basket, I’m once again excited. Who knew the one that was so resistant to a printer is now in love with hers?  As always, thanks for the push Casey…. what would I do without you? Want another easy and stylish way to hide your printer? Check out this post!