How to Replace a Garbage Disposal By Yourself

A few weeks ago, I got a text from Finn that said we had a puddle of water underneath the kitchen sink. Ugh. Not the best text message to receive. After investigating further, we realized that the water was dripping from our garbage disposal. I figured that it might just be a loose pipe, but it was actually coming from the base of the garbage disposal. A nice slow drip. I did a bit of research online and learned that if the bottom of your disposal is leaking, it probably needs to be replaced all together. Ours is 13 years old, and the typical lifespan of this kitchen appliance is 12 years…so it was official, we needed to replace it! I took a look at my week ahead and saw I was pretty slammed with projects, so I headed to Angie’s List to find a plumber to fix this issue quickly. I found a plumber, but he couldn’t come out for about 4 days and he was going to charge me $320…($120 for the new disposal and $200 for labor). That’s when I decided I should just DIY this project and figure it out myself. Because if I was going to have to wait a few days and shell out that much money, I might as well give this project a shot in the meantime. Spoiler alert: This project was WAY easier than I thought it would be. I blocked out 4 hours in my calendar to get this done and it ended up only taking me about an hour to replace our old garbage disposal with a new one. I was nervous because it combines both plumbing and electrical work, but it’s actually very basic and each step is incredibly easy. If you’ve replaced a light fixture or installed a faucet, this DIY is just as easy as those ones! 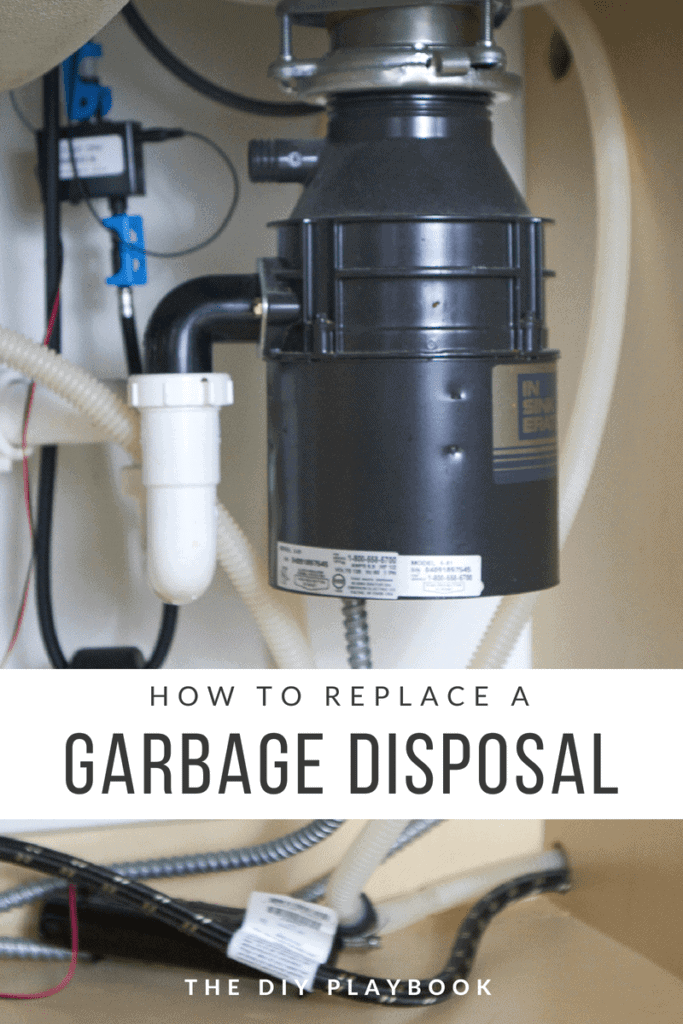 Supplies to Replace a Garbage Disposal 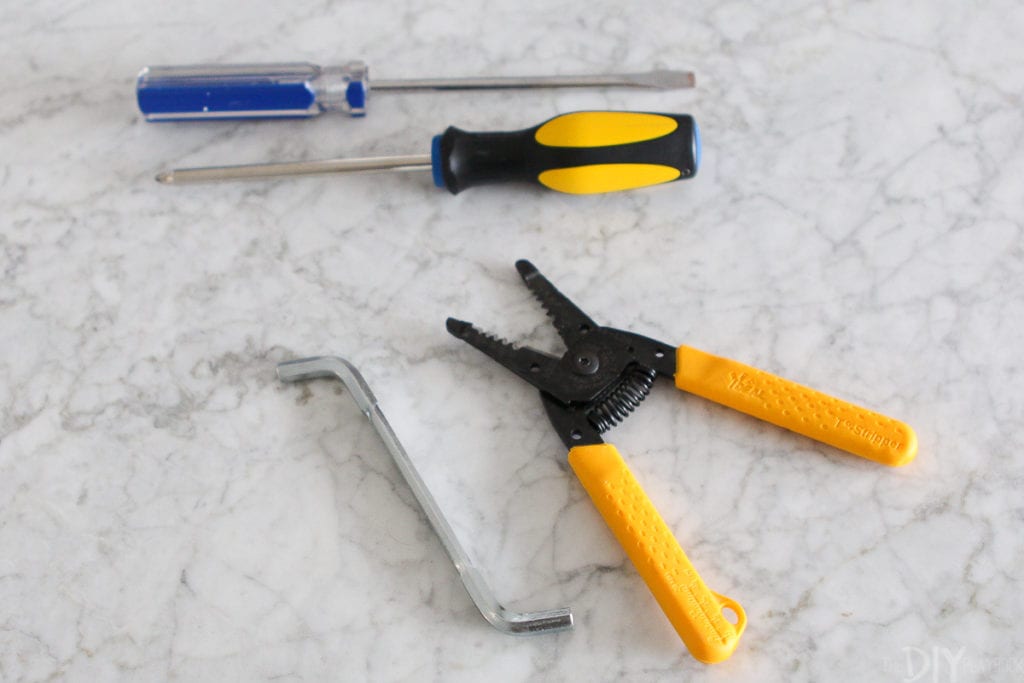 How to Replace a Garbage Disposal

Before I headed to Lowe’s, I snapped a few pictures of my broken garbage disposal. When buying a new one, you’ll need to match the horsepower on the old one. My old one was a 1/2HP, so that’s why I ended up going with this one.

Turn Off the Power

The first, and most important, step is to turn off the power to your garbage disposal. I headed to our electrical panel and luckily one of our switches was clearly marked “garbage disposal.” I turned it off and then tried the switch over the sink to make sure it was officially off. 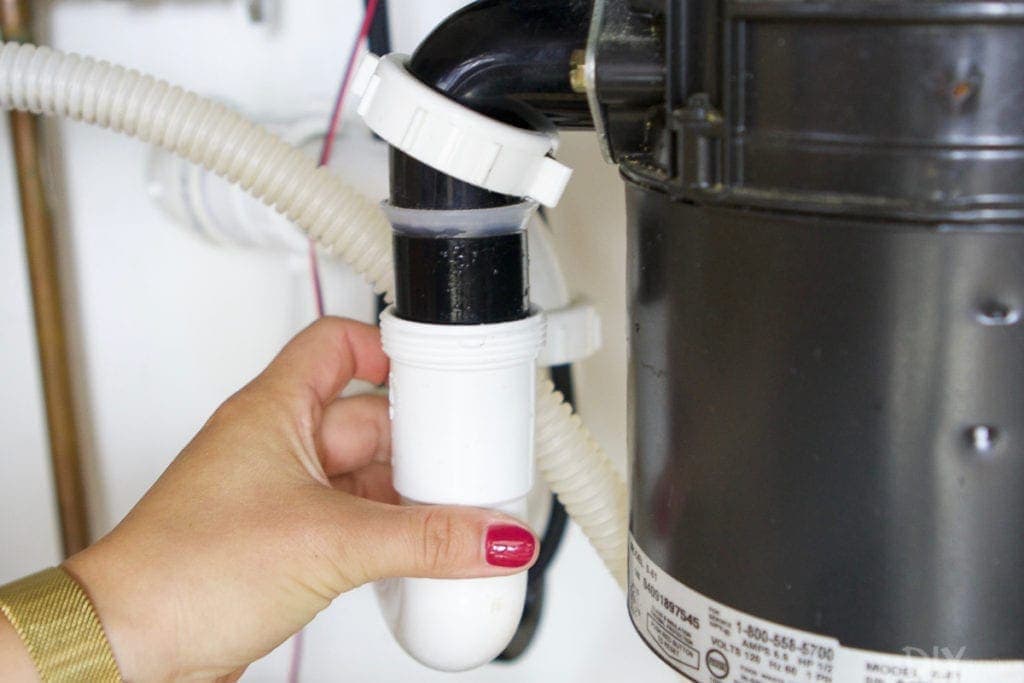 Get a bucket of water and some towels handy for this part. You’ll want to unscrew the drain trap and disconnect it from your old garbage disposal. Just loosen the nut on the PVC pipe and it should disconnect fairly easily. There may be some water and debris in there, so be ready for that. Don’t throw this pipe away, because you’ll need it when you hook up your new garbage disposal. 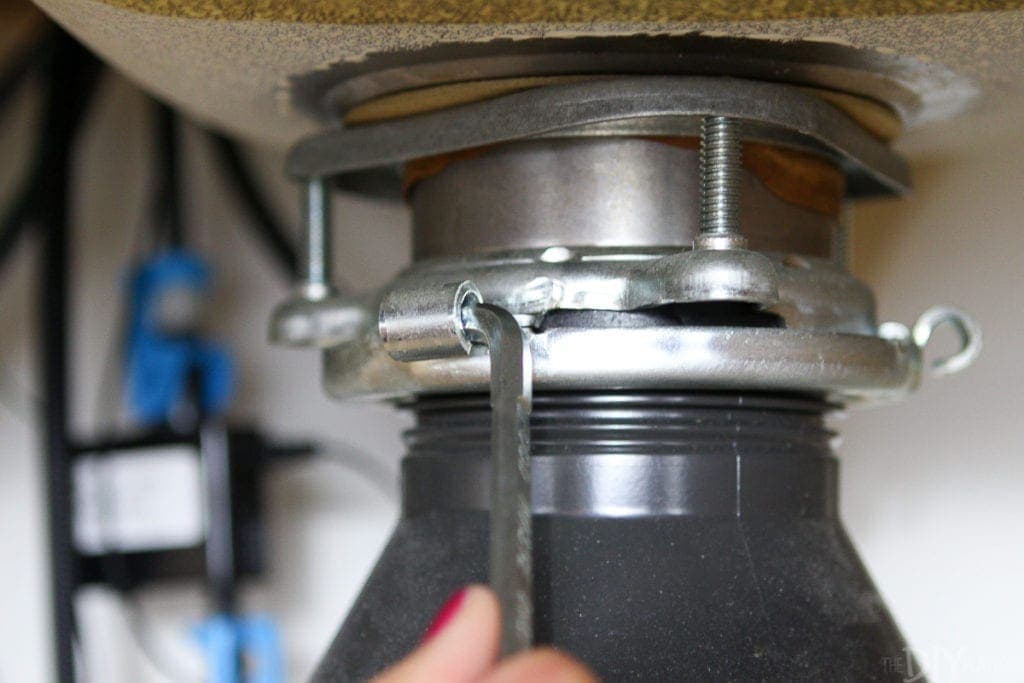 Insert the wrenchette (this was a new-to-me word, but basically it’s the big metal thing that comes with your new disposal), into one of the lugs on the mounting ring. You’ll want to support the base of the disposal with your other hand so it doesn’t crash down when you loosen it. You will turn it to the left to unscrew it from the ring. I had to use a lot of muscle for this step, so really put your back into it to get it off of there!

By this point my old disposal was disconnected from the sink, but it was still connected to the electrical supply. I used a screwdriver to remove the cover plate on the bottom of the machine and I then disconnected all of the wires. 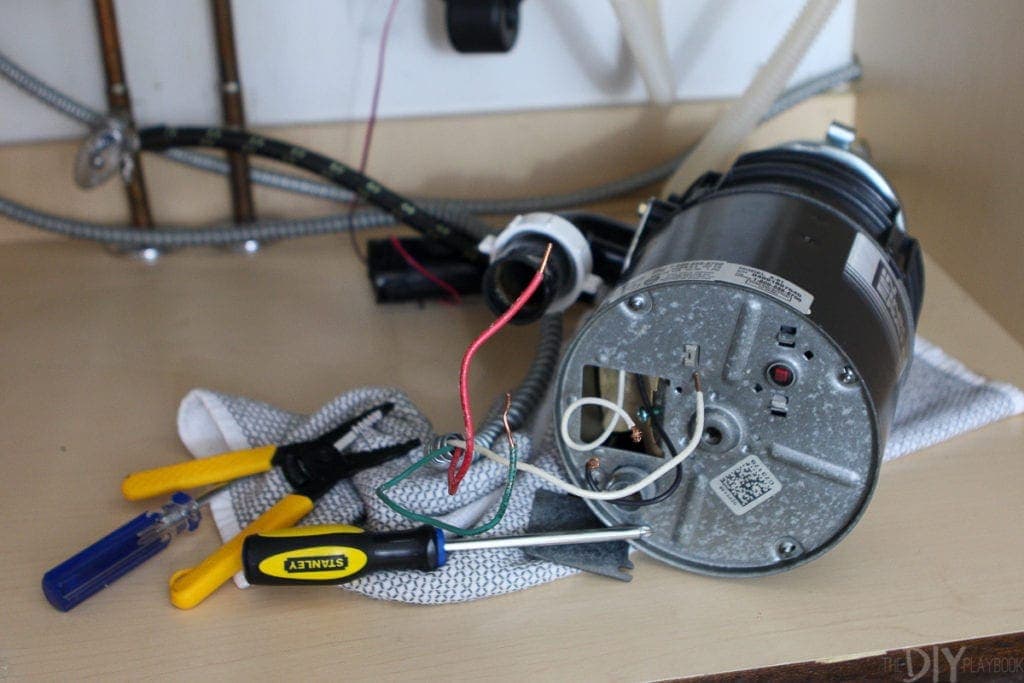 You should have a green (ground), red (hot), and a white (neutral) wire coming from your electrical supply. Once I got everything disconnected, I put the old disposal to the side (but hold onto the screws, wire nuts, and cable connector that you unscrewed). 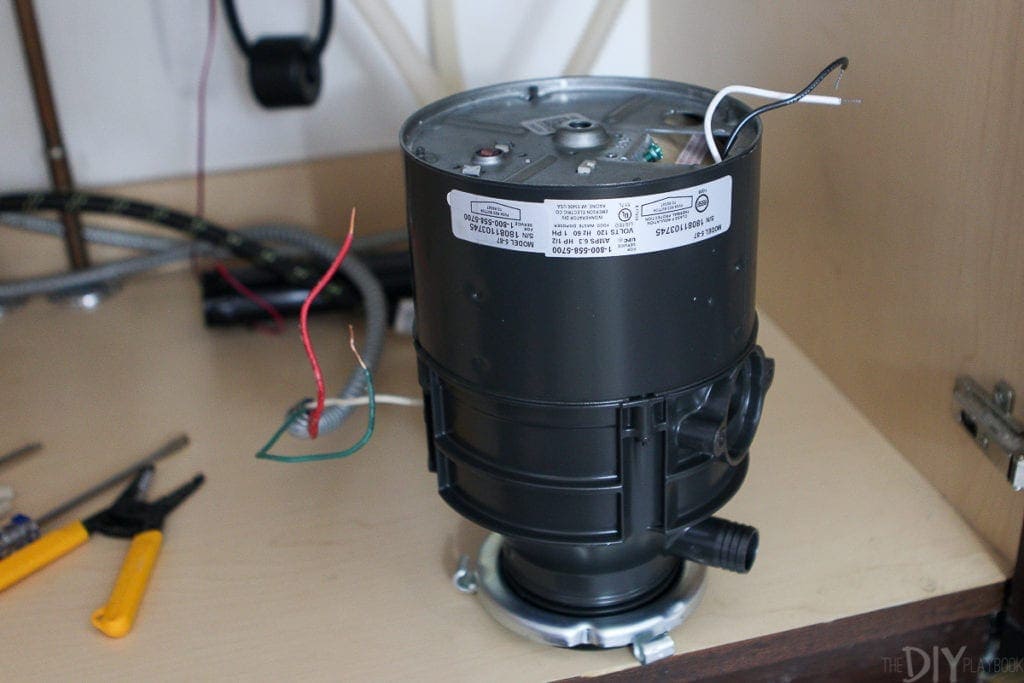 With the old one out, it was time to bring the new one in. I removed the cover plate on the bottom of the new disposal and took out the black and white wires. Then I ran the electrical cable through the hole and secured with the clamp connector (the new disposal doesn’t come with one of these, so I used the connector from my old one!). 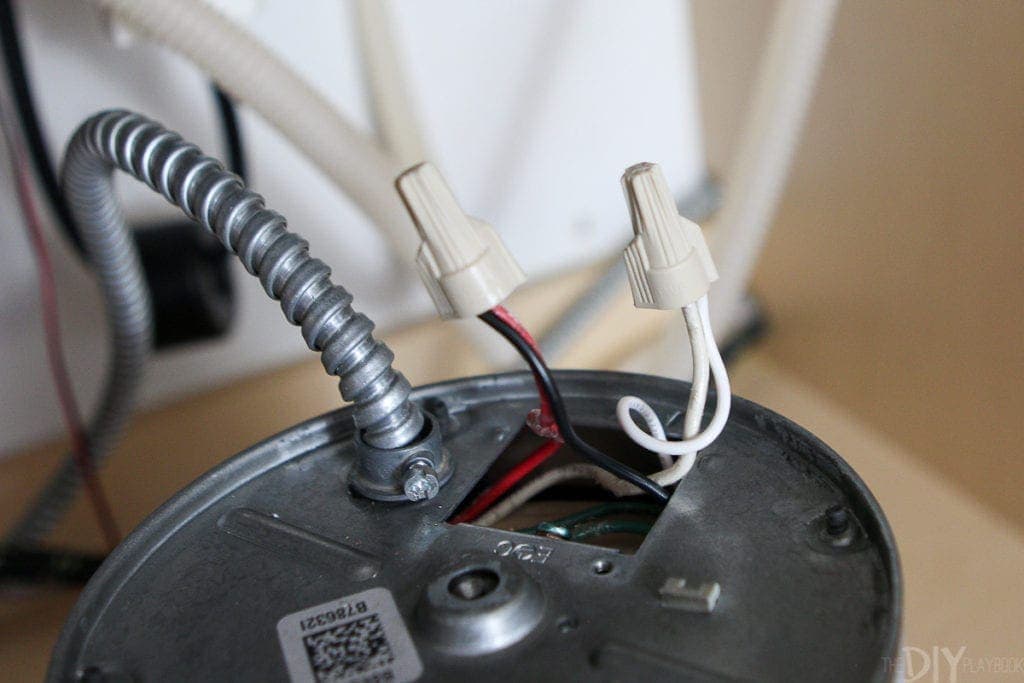 I then grounded the green wire to the screw, put black to red, and white to white and capped everything off. I pushed the wires back into the base of the disposal and screwed the cover plate back on. The electrical work was over! 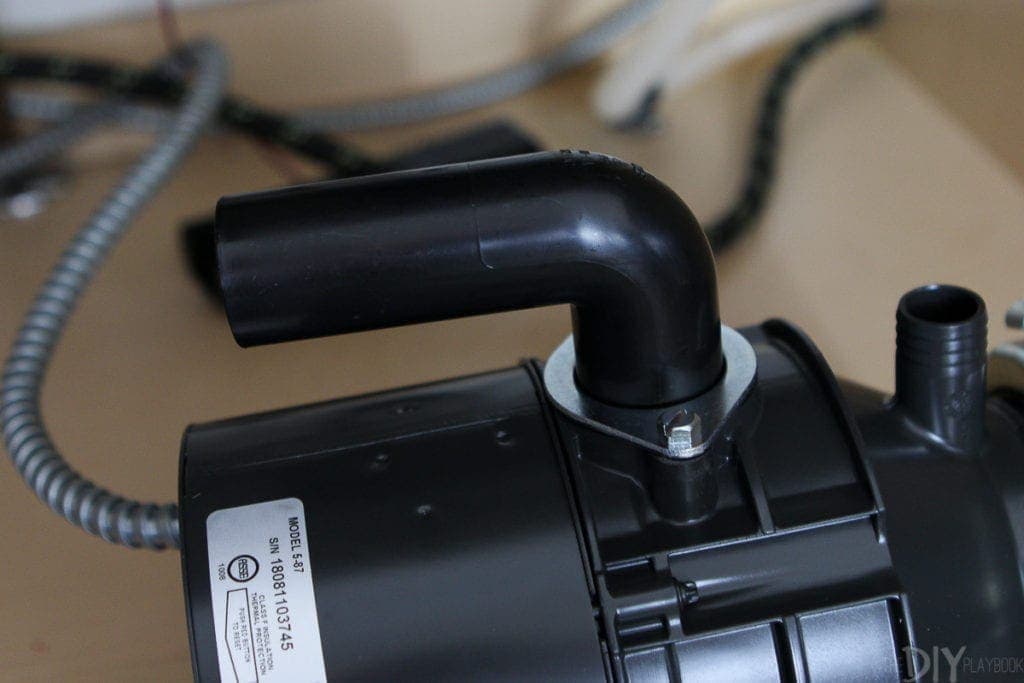 Following the directions that came with my unit, I added the discharge tube to the side of my new garbage disposal.

Now for the hardest part of this project to do by yourself…lifting the heavy disposal to attach it to the mounting ring. While this should have been an easy step, it was a difficult one to do by yourself. I found myself sweating (& cursing) as I attempted to lift and twist the new disposal into place. I ended up resting the disposal on a large box of fertilizer to give myself a break as I lined everything up. It was quite the shoulder workout holding this thing, but I eventually got it into place! I then used the wrenchette to make sure the connection was tight and secure. The last step is to attach the discharge tube back up to the waste drain. I cleaned out my old PVC pipe from my old disposal and used that to hook it all back up. I made sure all of my connections were tight, turned on the power, ran some water, and gave it a go.

Success! My new garbage disposal was purring like a kitten. Not only do I have a new non-leaking garbage disposal, but I didn’t have to shell out $320 to get this project done. Plus, I feel like a badass knowing that I did this all by myself. You should have seen me frantically texting Finn when I was finished, just to tell him about my accomplishment. Best.feeling.ever.