Today, I have a fun makeover to share with all of you…it’s the black and white bathroom in my sister’s condo. I first introduced you to Liz and her lovely home last summer when I shared her cozy guest bedroom here on the blog. 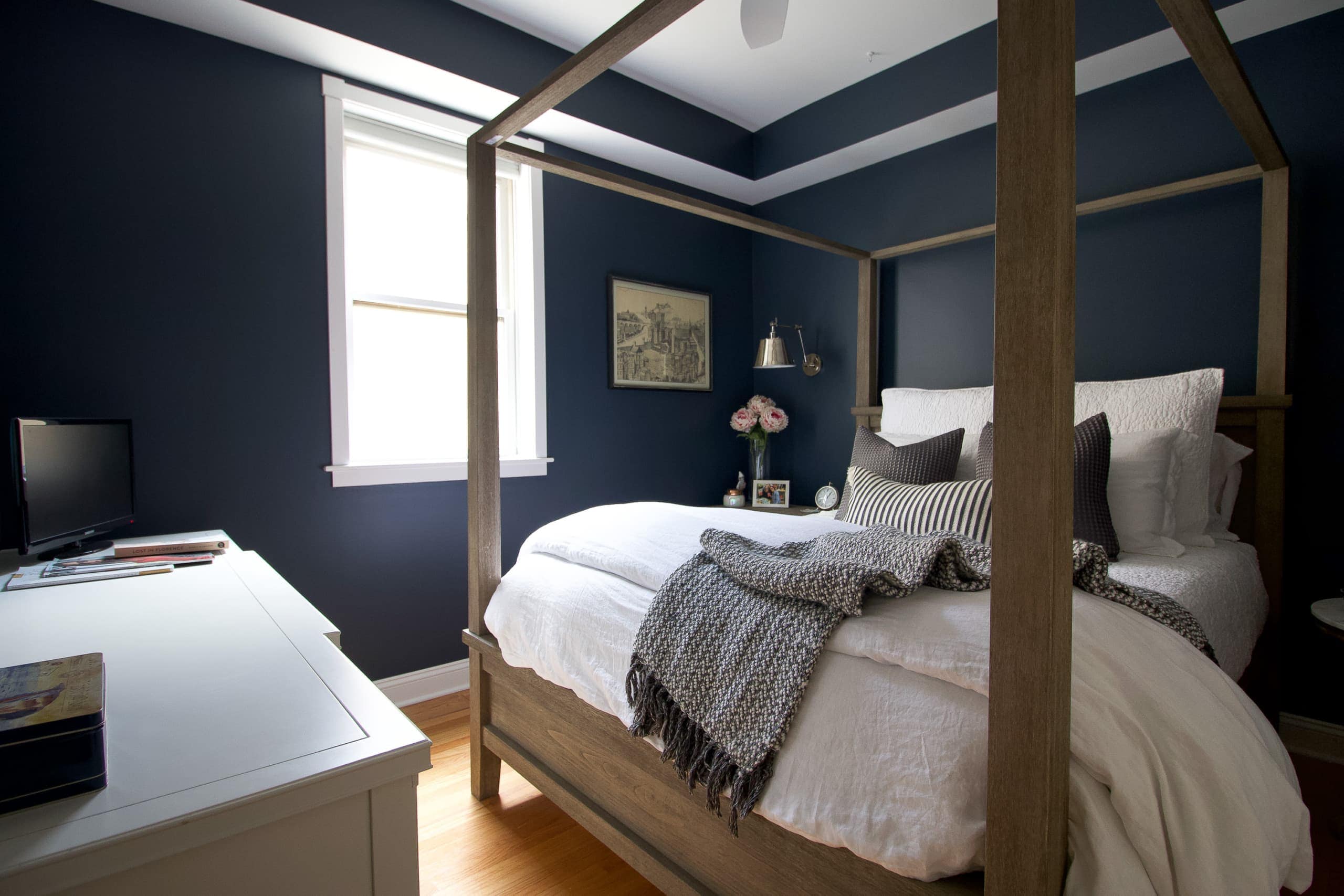 Next, she dipped her toe into the world of home renovations with a large-scale overhaul of her main bathroom suite. While I’m really into DIY and home improvement, Liz is a complete newbie when it comes to all things home. Undergoing a large renovation was new territory for her and she shared 5 things she learned from her first home project in this blog post.

Wowza! You’ve gotta head to that post to see all of the pictures. The space is so much bigger and more useable now. 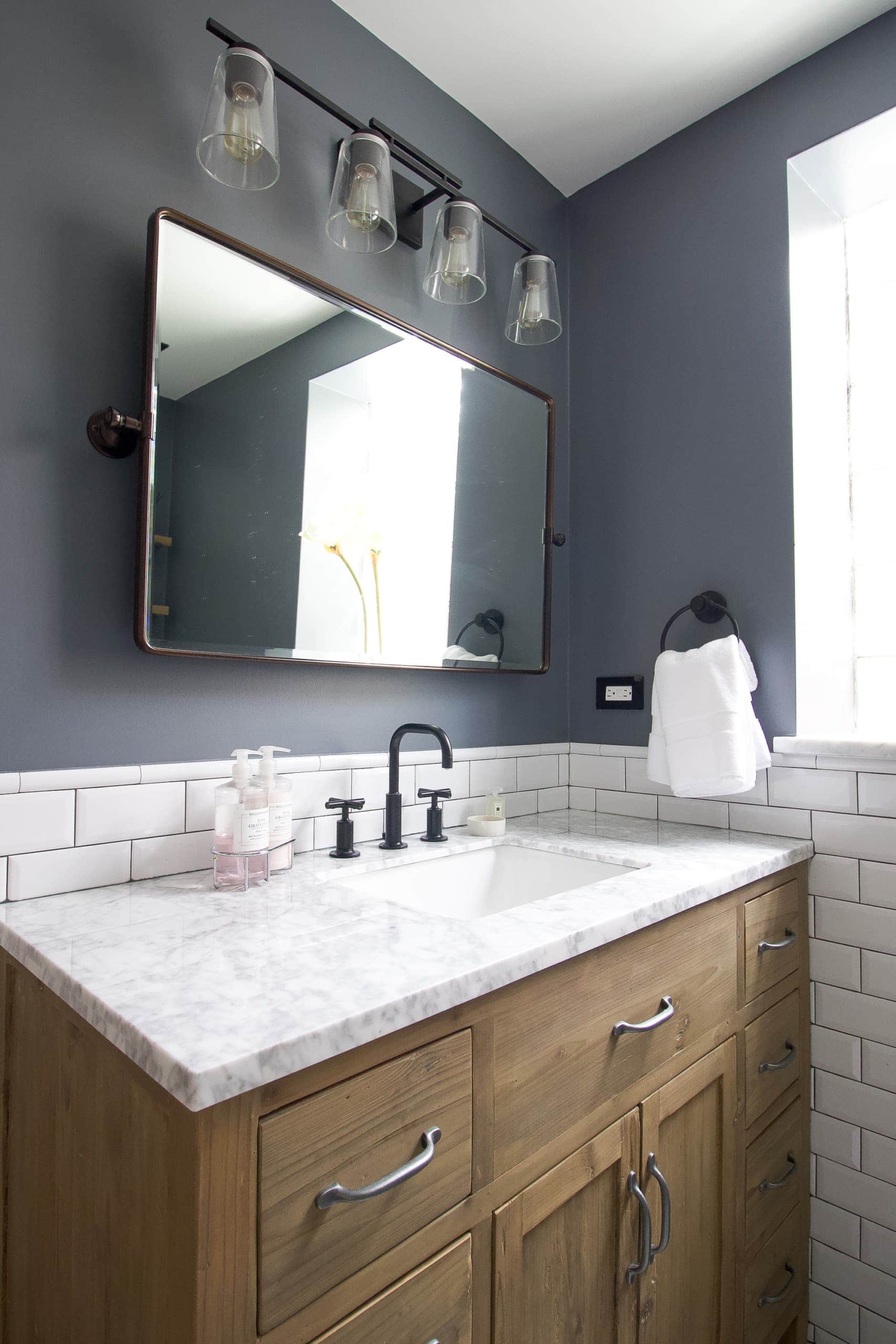 With her main bathroom looking amazing, her outdated guest bathroom was sticking out like a sore thumb. Liz survived her first big renovation, so why not take on another project? Let’s take a look at the before photos of this space. 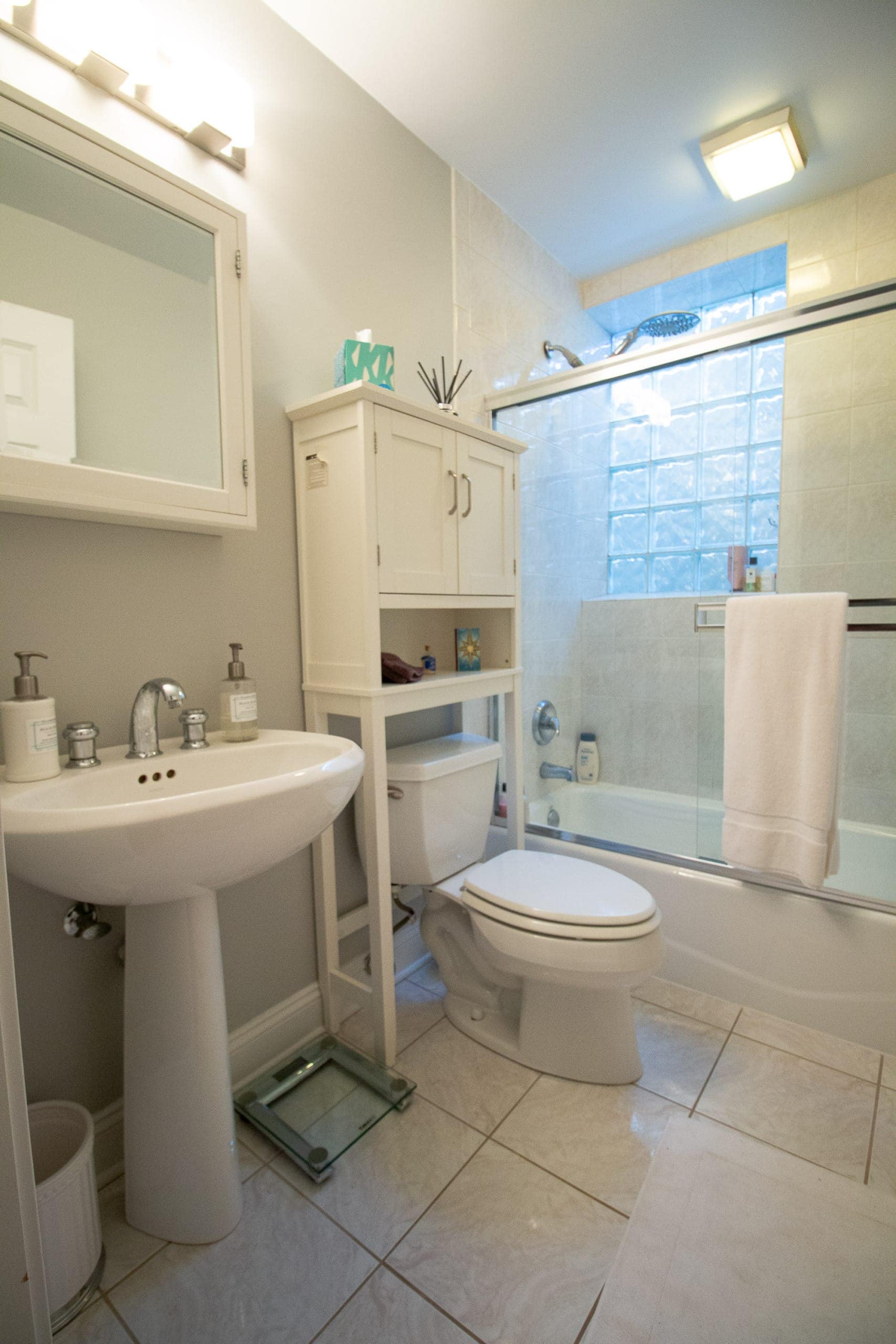 It’s a pretty small bathroom with outdated tile and fixtures. This space was lacking storage, style, and color and Liz was on a mission to change that.

She ended up hiring the same crew who renovated  her first bathroom for this project and they were able to complete this space in eight days for $8,500. This is the same contractor we used for our kitchen, and I’ll admit, his team is very speedy. So, I wouldn’t expect every bathroom overhaul to be completed in such a short amount of time. But, I just want you to have some numbers that might be helpful for your next big bathroom project.

Black and White Bathroom – After 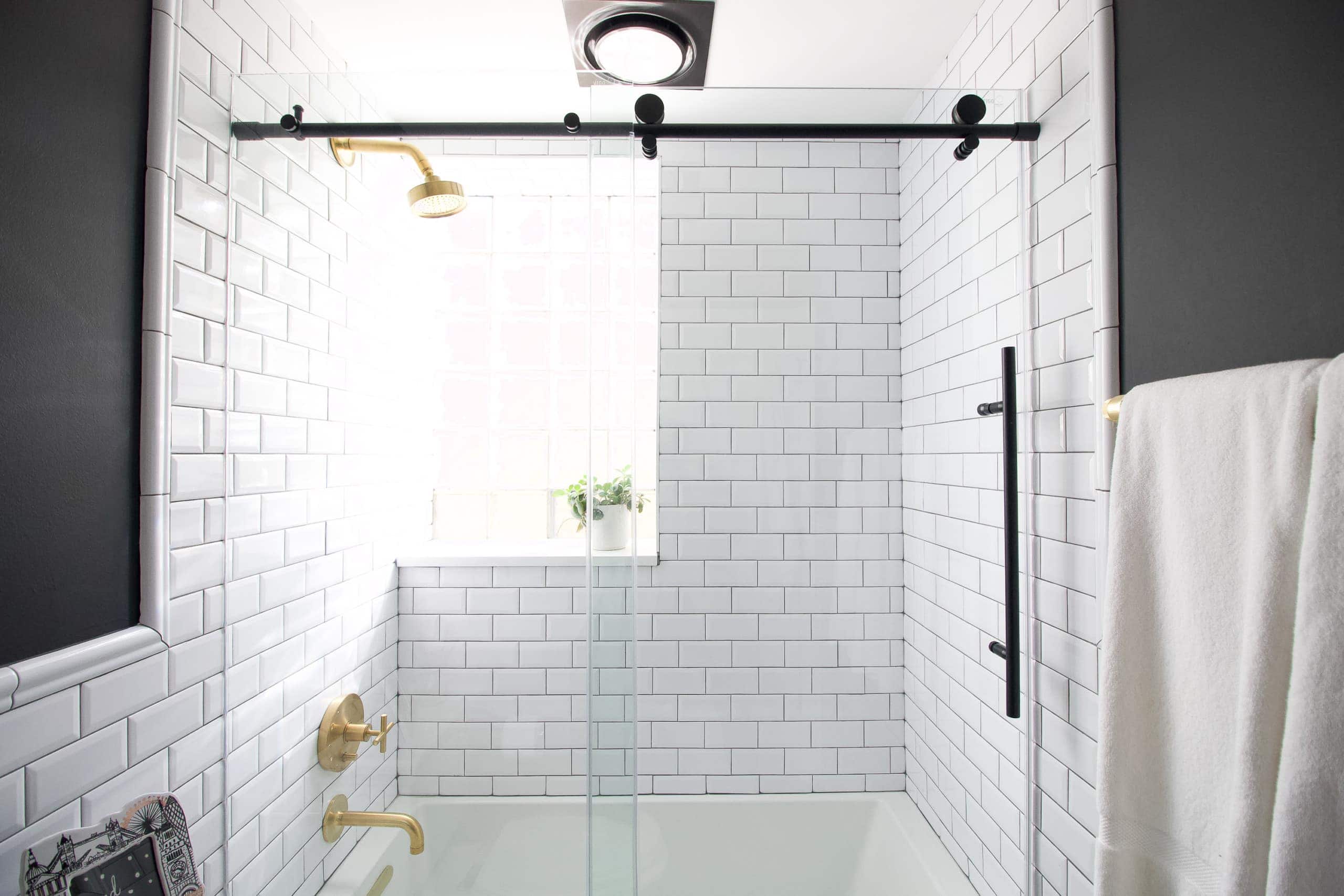 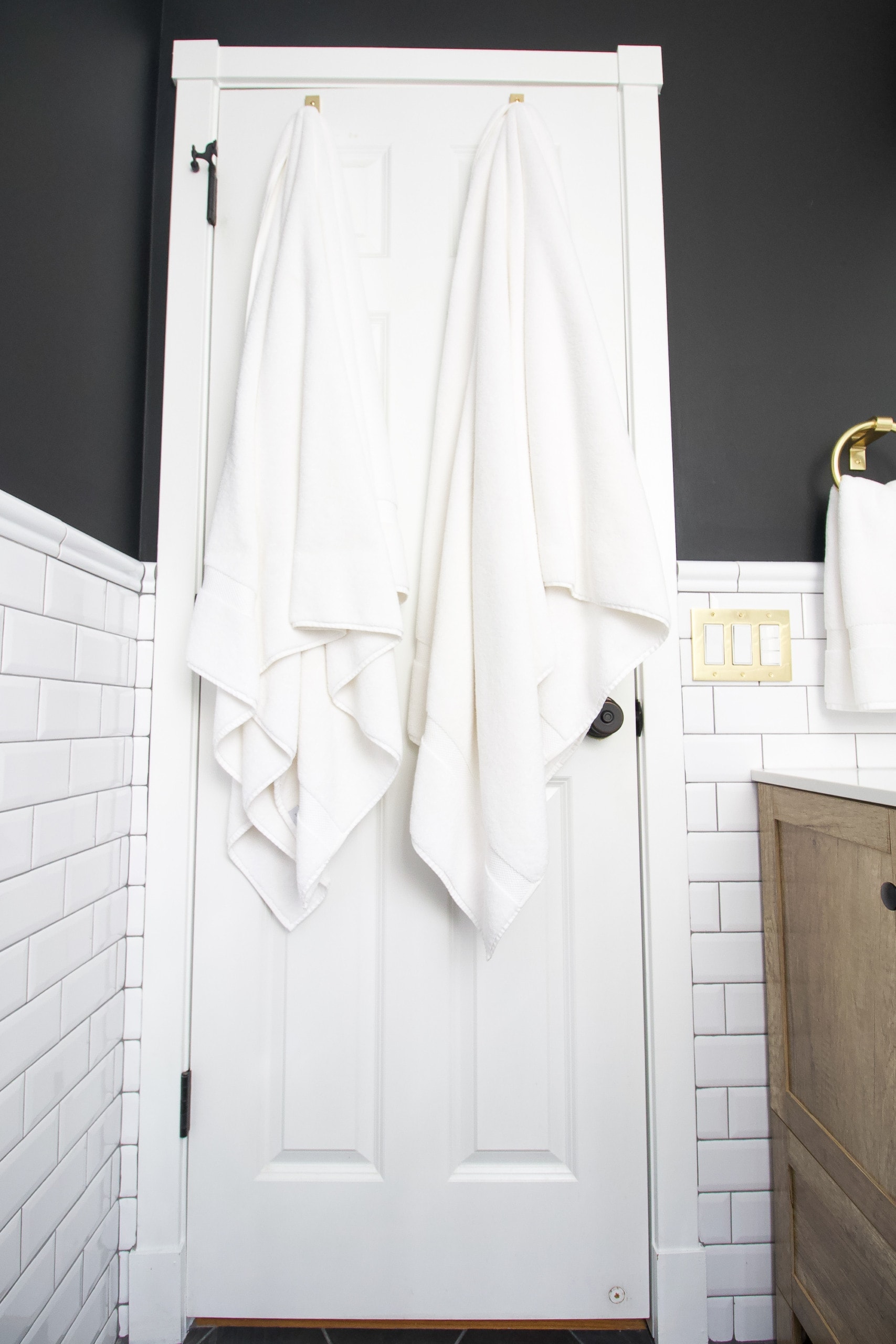 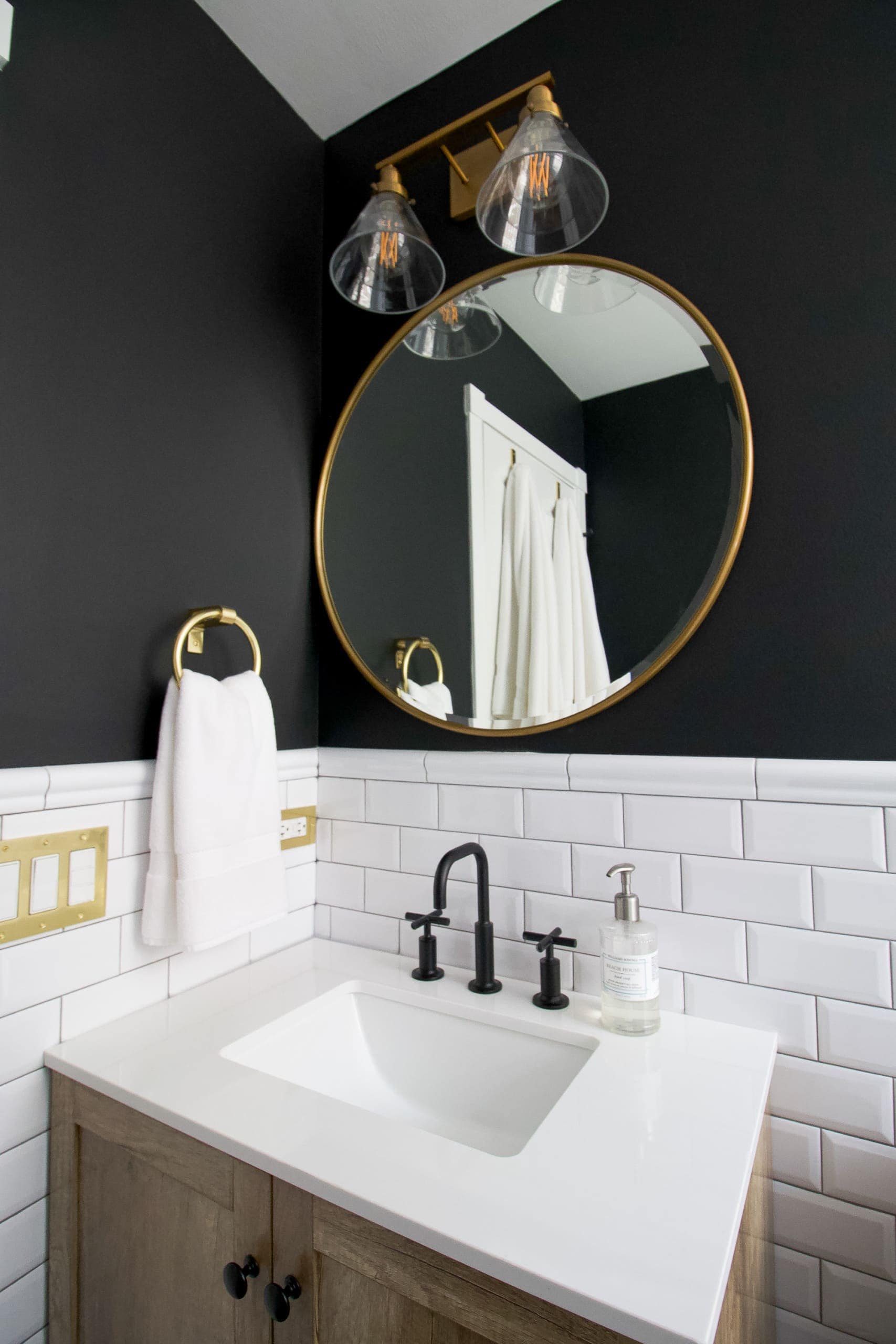 This bathroom boasts new tile, a new deeper tub (more on that below), new fixtures, a new vanity… Basically this entire space is fresh and new! 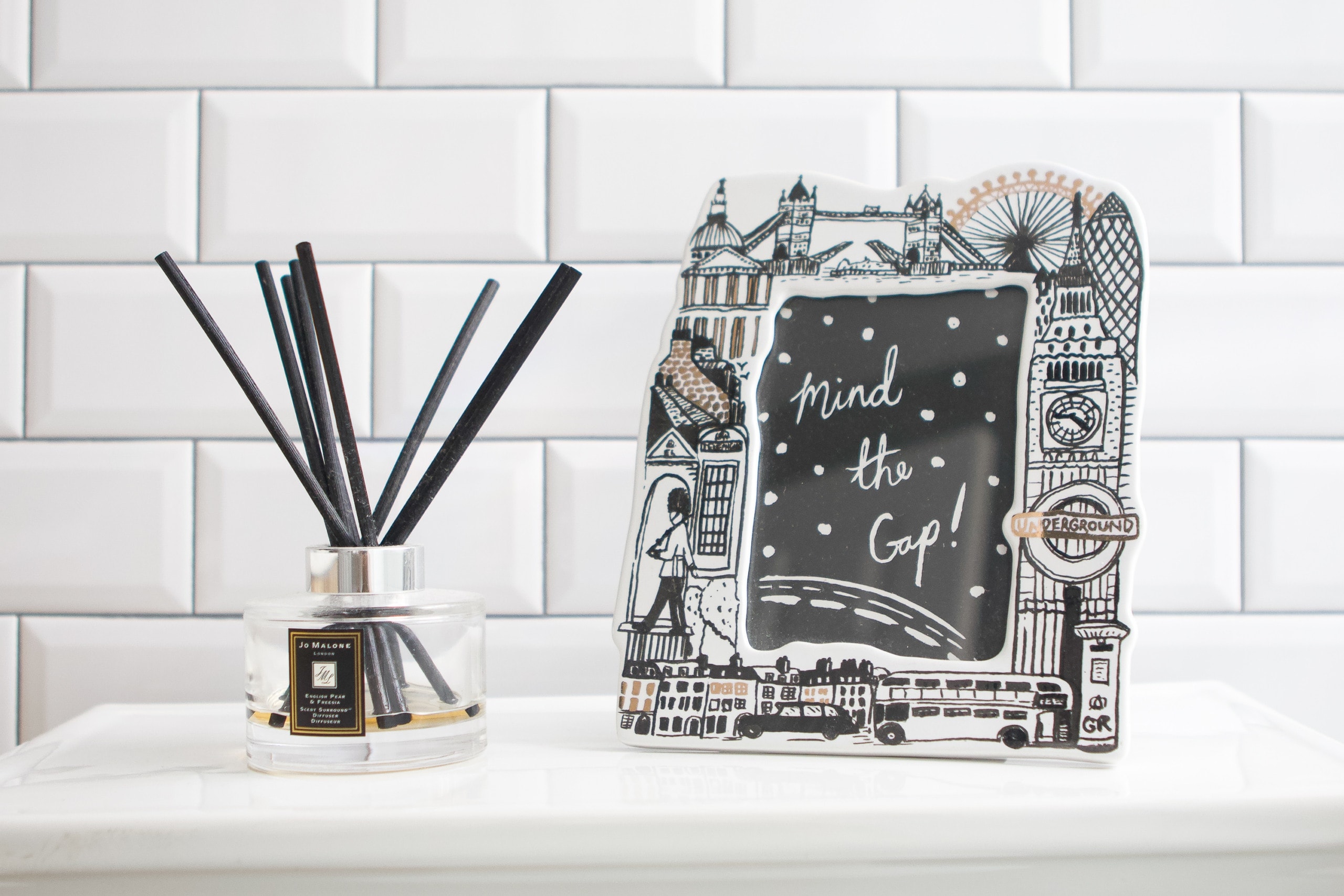 And even though it’s a black and white bathroom, it certainly isn’t devoid of warmth or personality. The gold (or brass?) accents definitely warm things up and add some color to this space. 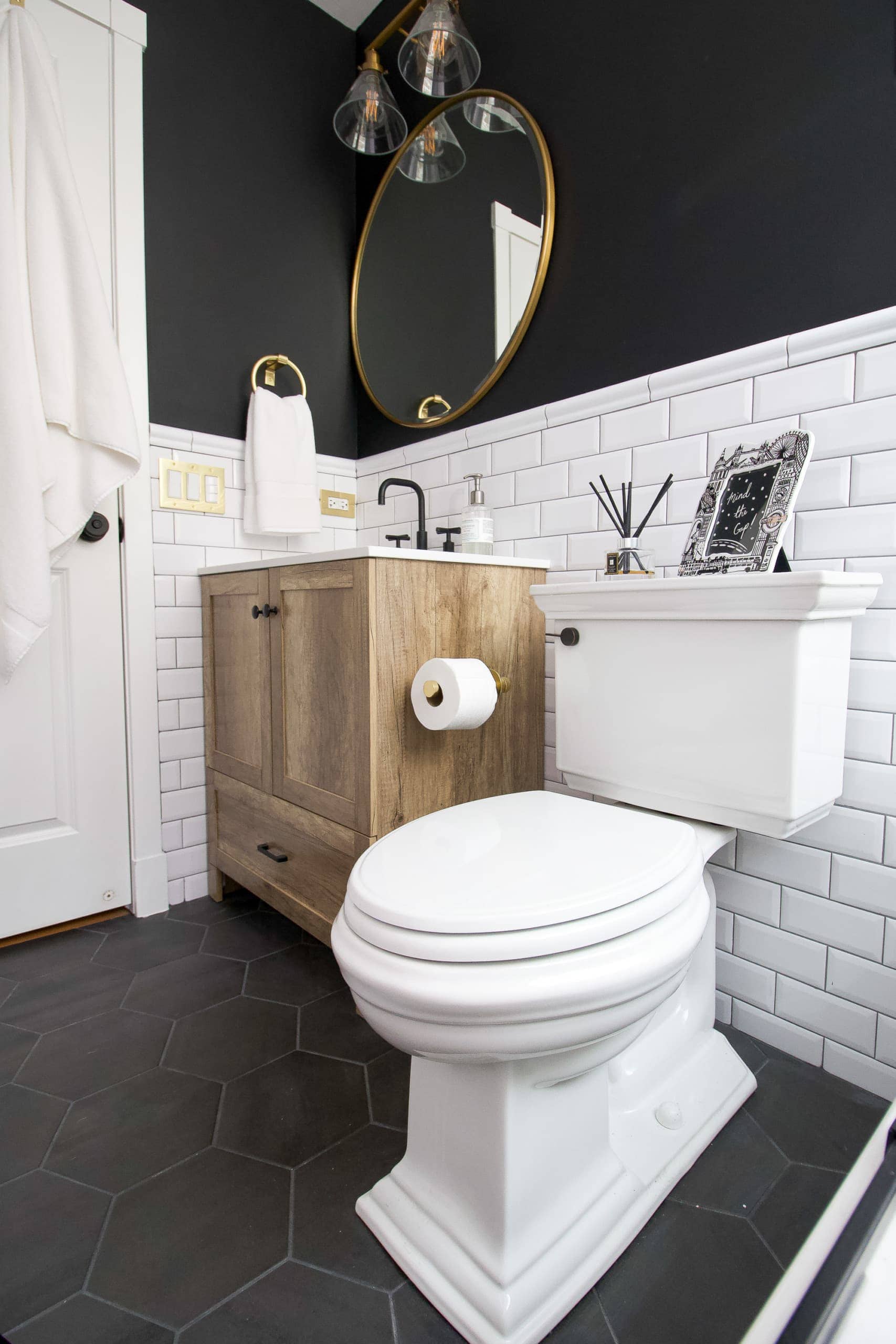 Finn and I have gone through many large renovations over our seven years of being homeowners, but with each project comes new lessons and mistakes. The same goes for Liz. This was her second big renovation, and her second bathroom, so while she learned a lot the first time around there was still more to learn.

Okay, this makes me laugh because this lesson was actually on Liz’s list the first time around. (Apparently she didn’t learn from her mistake. Ha!) Liz booked the crew to start at the beginning of February 2021, so she started ordering items in November. With COVID, shipping has been delayed on lots of home items, so I encouraged her to order things early. Well, that was my mistake, since our garage quickly became Liz’s unofficial storage unit. Everything arrived within a week of placing her orders and all the pieces arrived on my doorstep. In fact, the toilet and shower doors were actually just left out on our lawn by the shipping department. (I wish I had a picture!)

Finn and I came home from an appointment and he was like, “Honey, why is there a toilet in our lawn along with a huge pallet?” Liz was in Hawaii and failed to mention that we might get a large delivery that day. We weren’t able to lift the pallet ourselves, so Finn had to take the box apart, remove the shower doors one by one, and carry them to our garage. Ha, you can only imagine how happy Finn was about this. Liz has slowly been making it up to us! Ha!

So our biggest piece of advice? Have a plan for storing all of your supplies and know when they’ll be arriving.

Removing a Bathtub Can Be Tough

Liz really wanted to remove the old cast iron tub and replace it with a deeper one. She lives in a condo here in Chicago and doorways can be pretty tight. I remember in our old condo that our contractor had a really tough time getting our old bathtub out when we converted it to a shower. (I think they actually had to cut it in half to remove it.) I mentioned this to Liz and her crew ran into the same problem. Apparently, many bathtubs are put in before drywall is up, so they’re easier to maneuver into place. 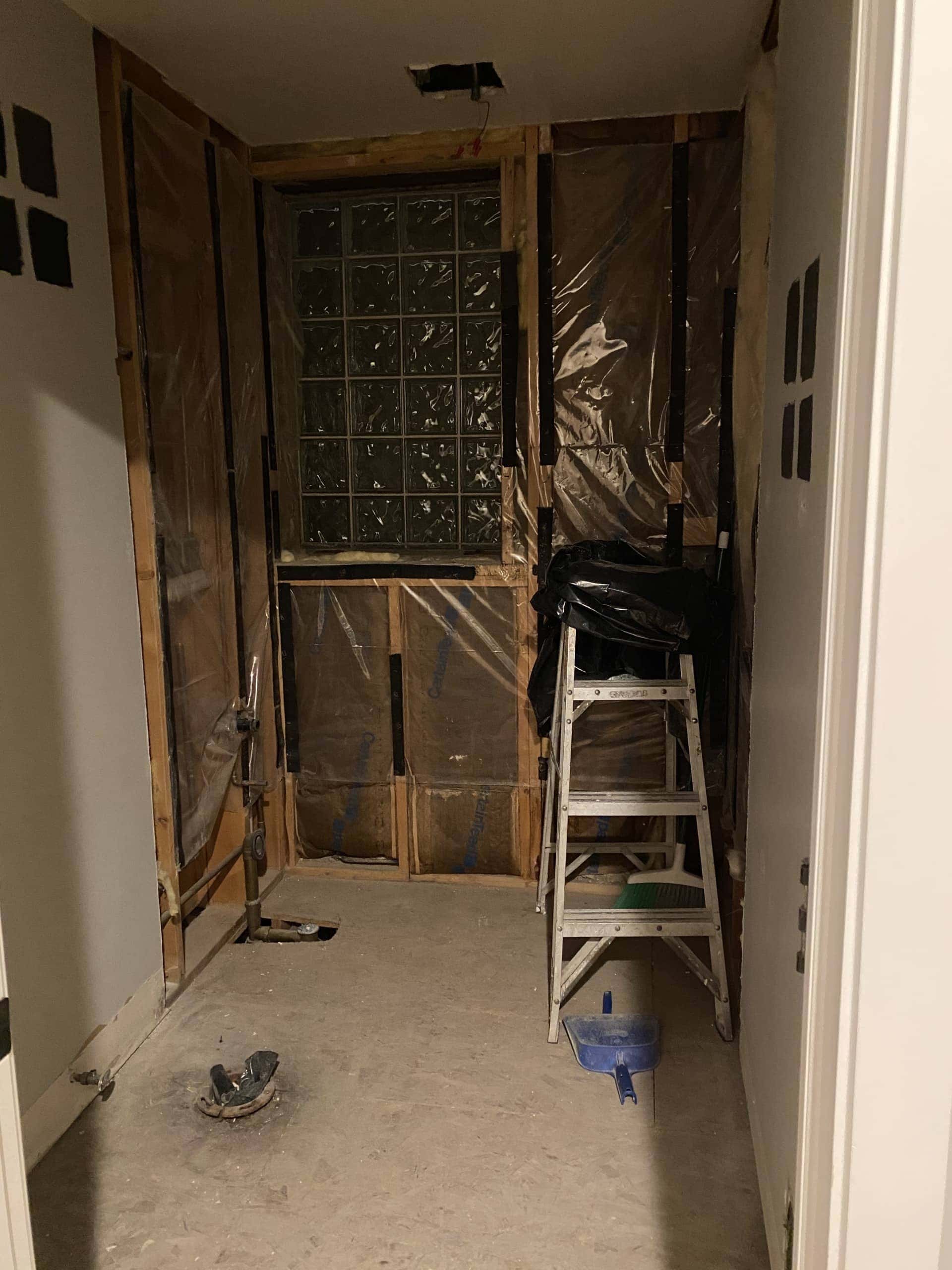 Eventually, Liz’s crew was able to remove the old bathtub, but it took a lot of time, muscle, and noise. (Sorry, neighbors!) That’s something to keep in mind if you’re replacing a tub.

Brass & Gold Are Not the Same 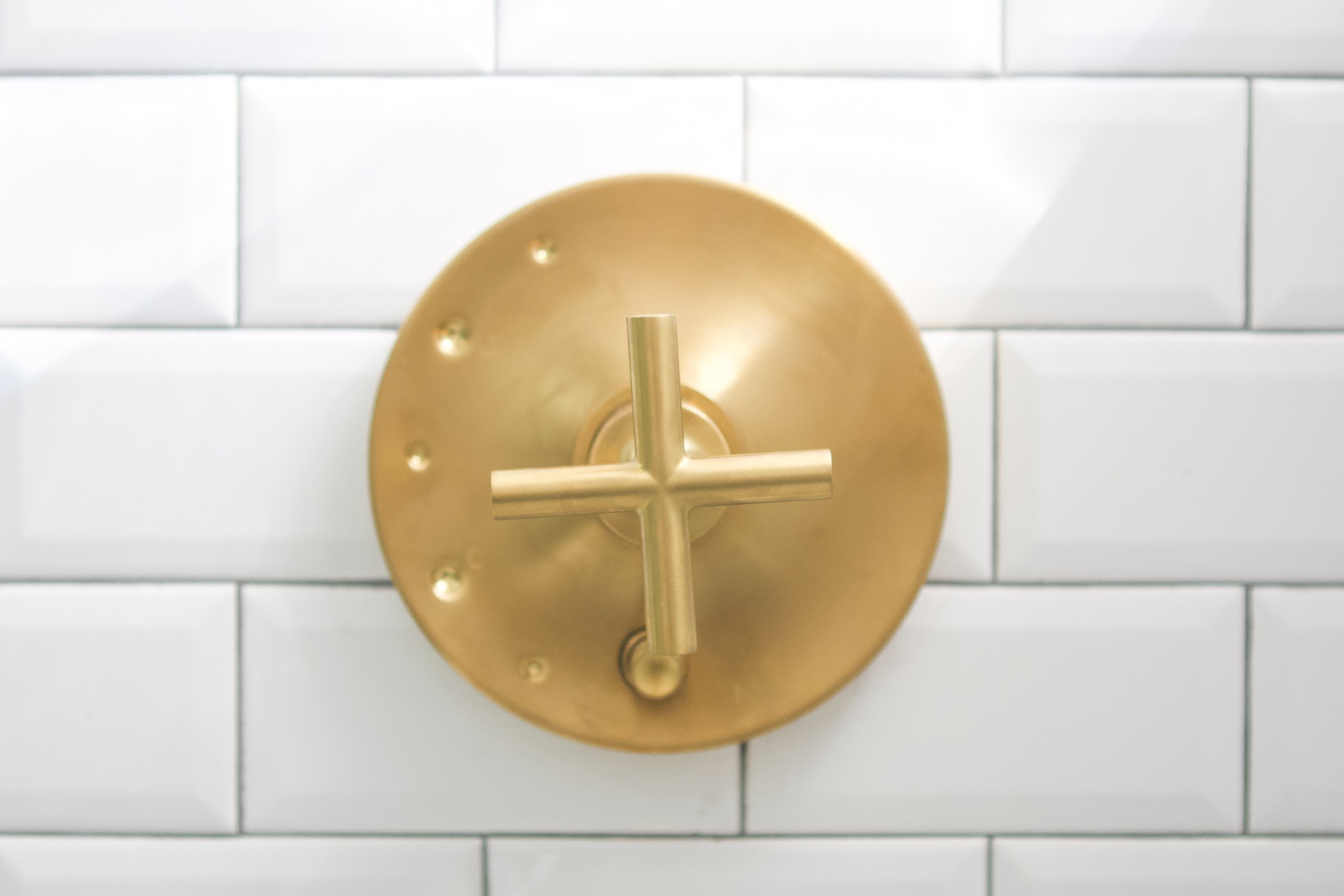 This was probably Liz’s biggest lesson for this project. She ended up going with black fixtures and a mix of gold and brass for the other elements. I always encourage people to mix metals in a space because it makes the room more interesting and layered, however, I would either choose brass or gold, not both. Liz ended up ordering a mixture of gold and brass, as well as a mixture of polished versus brushed. That meant that she was left with a bunch of fixtures that didn’t really match at all. She ended up returning some of the pieces and finally decided on brushed brass for a majority of her fixtures. In the end, I would say go with either brass or gold and definitely stick with the same finish throughout. In fact, it might even be best to try to stick with the same brand for all of those elements in a space, since coloring can vary between stores.

Think About Using the Space Liz mostly uses this bathroom for taking baths. She works as an ICU nurse, so she is on her feet all day and likes a good soak. So it was important for her to have a nice deep tub. She ended up going with this large soaking tub that is extra deep! I actually hopped in it to take some pictures and wow, it’s huge! 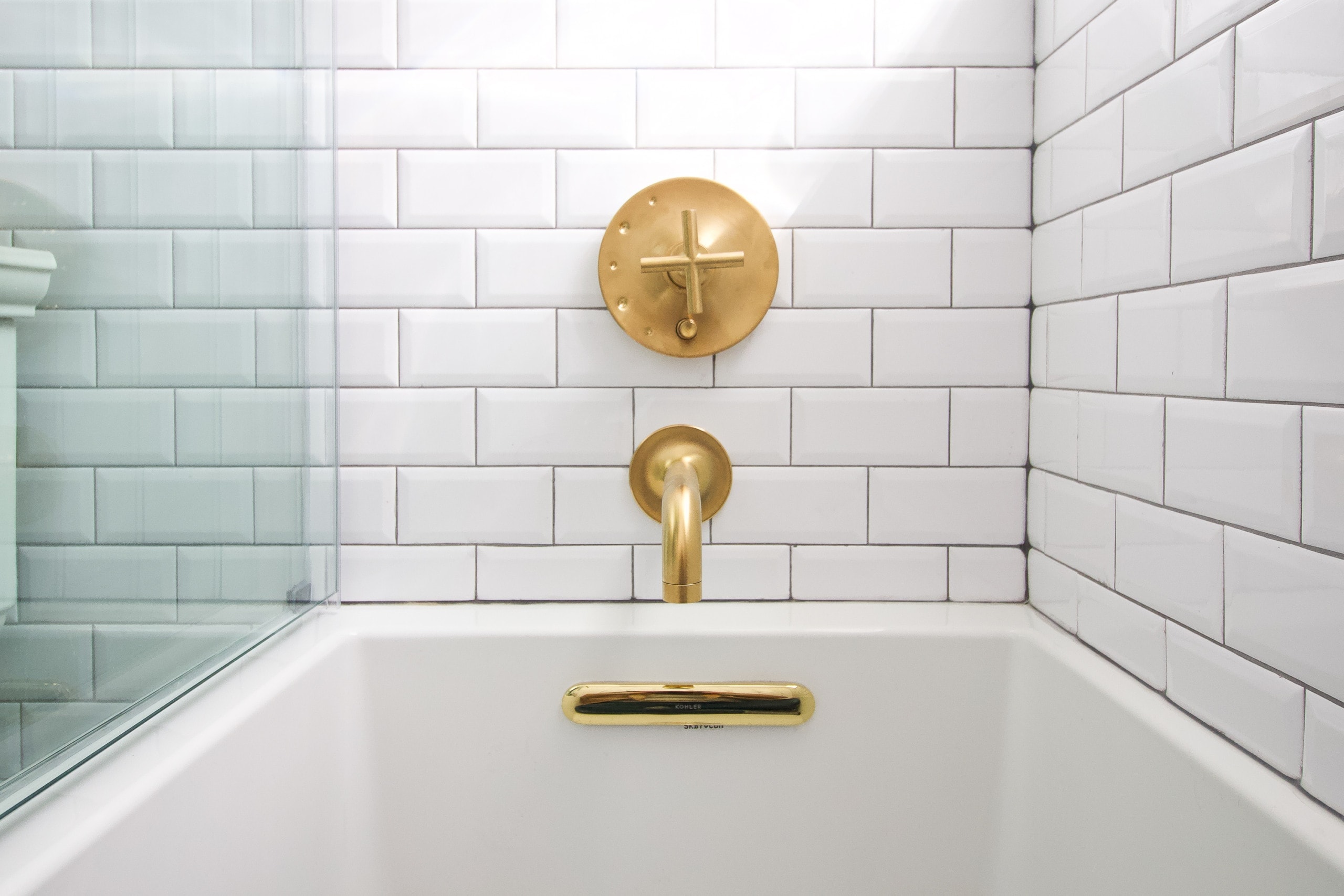 I love that she really thought through how she wanted to use the space and made her decisions based off of that. It definitely paid off. 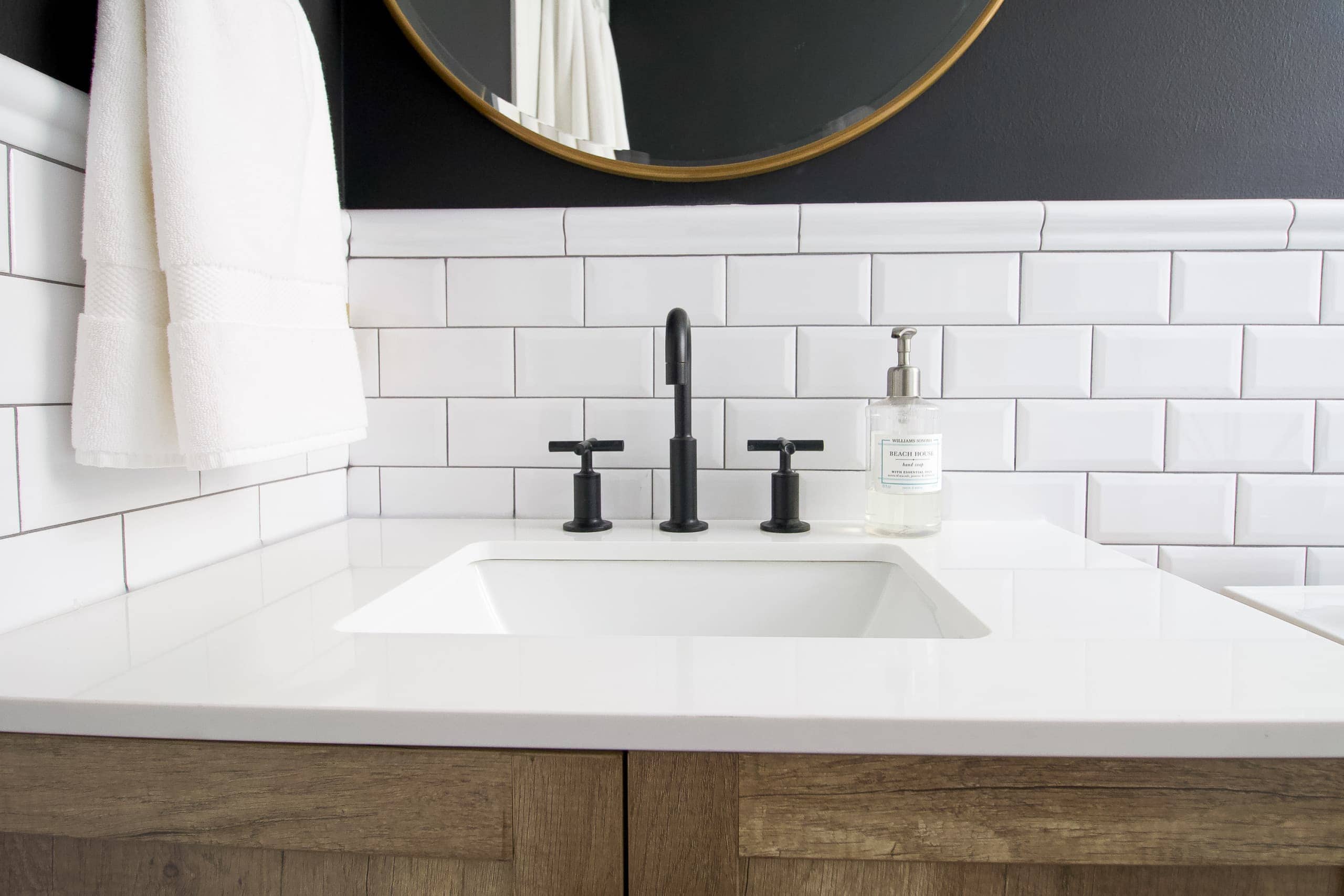 I also want to commend Liz for being smart about the items she chose for this bathroom. It isn’t exactly the same as her main bathroom, but it’s very cohesive. You can tell that the two bathrooms are in the same home. The bathrooms aren’t twins, but they’re sisters! 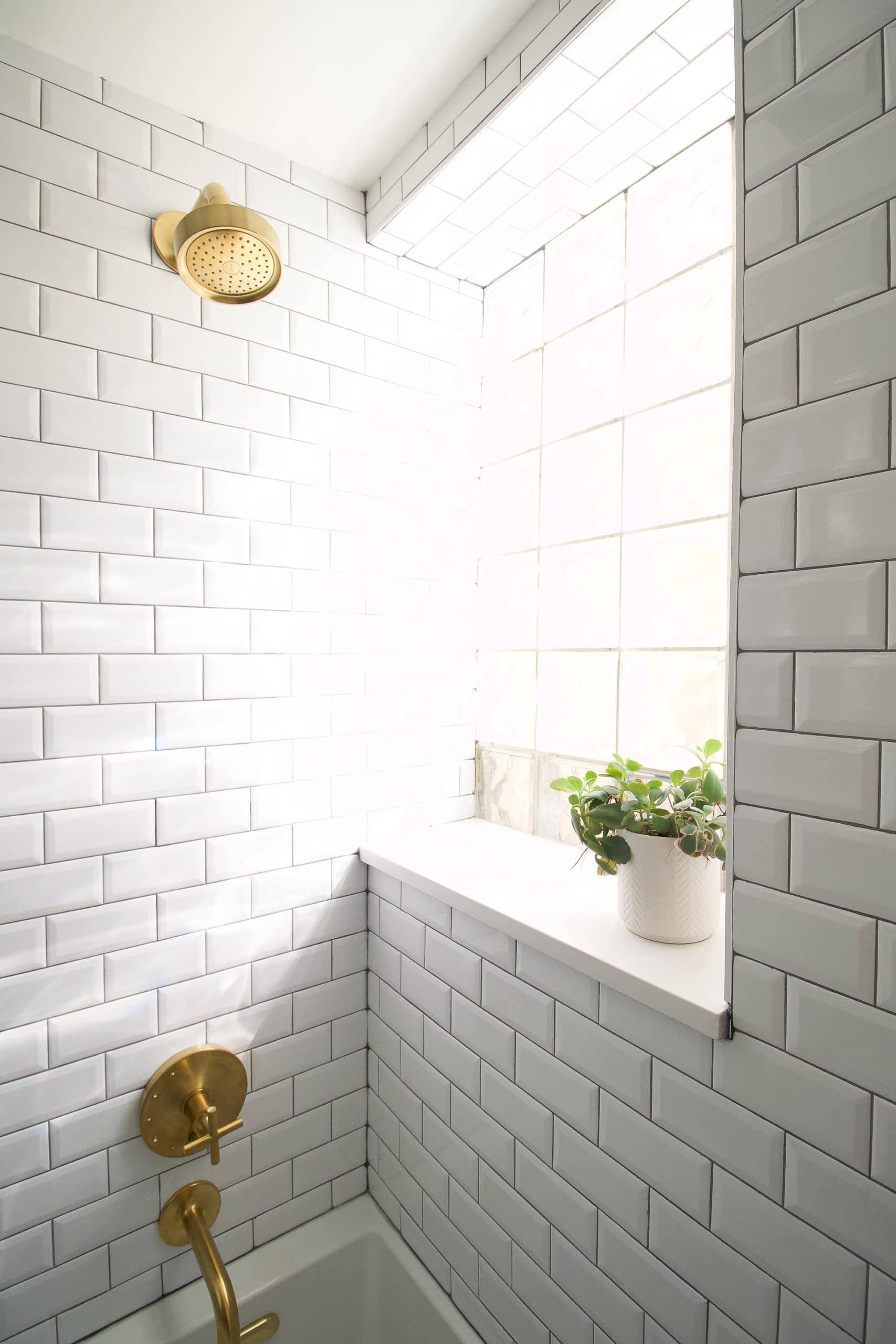 I think it’s smart to reuse some elements in multiple spaces throughout your home so everything flows well. 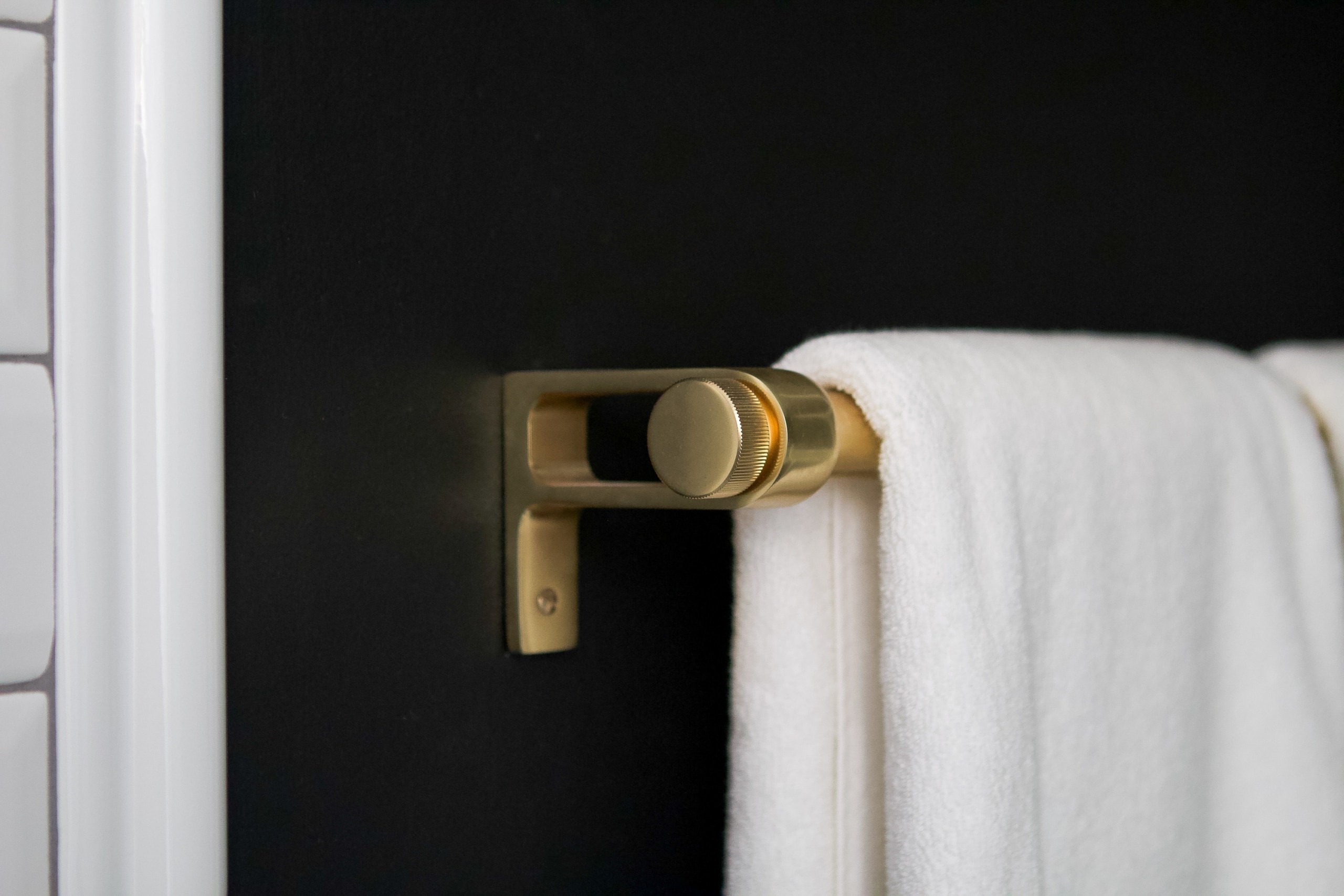 Liz ended up using the same wood tone for the vanity, the same black faucet, and the same subway tile look on the walls. This worked out beautifully.

Guest Bathroom – Before & After

I’m blown away by how this black and white bathroom came together. It went from a room devoid of any personality and it became an incredibly stylish guest bath.

A big thanks to Liz for giving us a peek into her latest project. I’m gently nudging her to do her kitchen next, so we’ll see if that’s the next reveal I share of her home here on the blog!