You all know we love a creative challenge around here, especially one with specific guidelines to follow in order to create something totally unexpected and unique. Plus, it’s even more fun to join in on a group challenge so we can see what all of the other participants come up with using the same guidelines. <– This is exactly why we said “HECK YES” when Patrón (yes, as in the Tequila) approached us to partner up & c.r.a.f.t. Wellll, technically they asked us to “create ART using a Patrón Bottle” but in our Playbook that means craft with a Patrón bottle, which quickly led to us replying, “where do we sign up?!” Who would have thought that of all brands out there, Patrón Tequila would be running this creative and inspiring ART contest over the next few months? We are honored and excited to spread the word because: 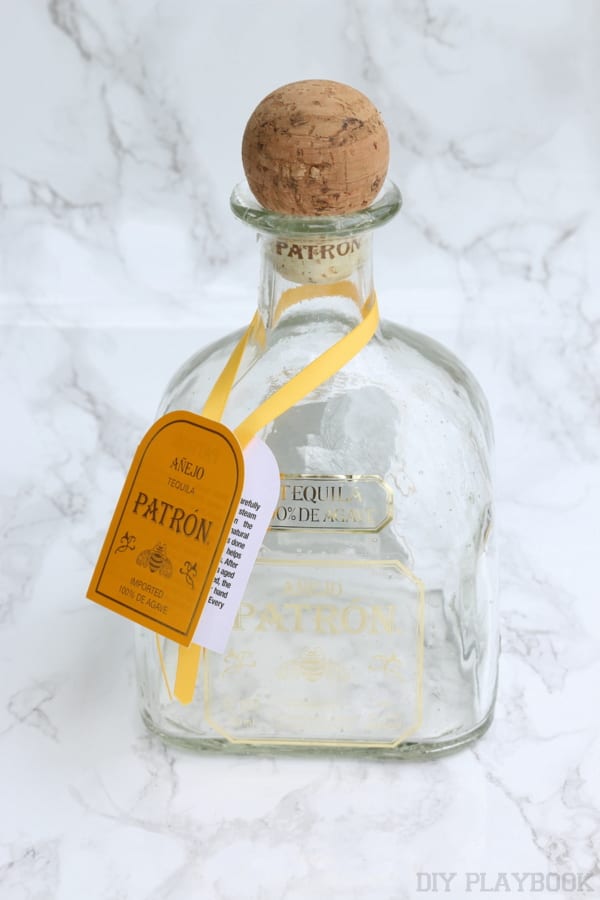 a. we heart an excuse to craft & create

b. we want to inspire YOU to create your own interpretation of Patrón Art because it’s a contest and there are some AH-MAZING prizes on the line!! ($10,000 for the winner, $1,000 for ALL NINE finalists!)

c. why the heck not?! Spreading creativity is what we’re all about here on the DIY Playbook. Whether we’re crafting with old Tequila bottles or Goodwill ornaments, we’re totally in!

Before we get into the contest details, allow us to show you our first interpretation of creating art with a Patrón Bottle. (we have one more coming next month) We went back and forth with different ideas and options and finally decided on this bottle DIY classic — upcycling the Patrón bottle into a soap dispenser. Although we aren’t running to place this soap dispenser in our own homes’ bathrooms, we do think this is a pretty awesome idea for a man-cave bathroom, bar sink, or as a gift to the Tequila lover in your life. Father’s Day inspiration anyone? #coughcough

Drilling holes in the cork is really all you have to do to recreate the look.  We’ll get to that in a second but let’s start with the supplies: Then, remove the cap of the Patrón bottle and get a soap pump to put on top of the top cork. We tried several soap dispenser pumps at HomeGoods and ALL of them would have worked because the pump is going on top of the cork. Step Three: Now this is where it gets a little tricky. We used a LARGE drill-bit to drill a hole through the circular cork. Then, you’ll have to maneuver the drill around the cork in a circular motion so that the pilot hole grows to a size that is large enough to fit onto the pump. Note: We had to drill out almost all of this first cork so that the pump would slide through the cork. Then we did that same step with the smaller cork. You probably don’t have to move this drill-bit in a circular motion as much because the hole doesn’t have to be as large. Step Four: Slide each piece of cork onto the pump until each cork is pushed as close as possible to the gold pump. <– the hard-ish part is OVER!! Side story from B: My mom bought me a funnel when we moved into our house and told me I should keep it in my kitchen because it’ll come in handy. I thought she was straight crazy, but reluctantly agreed to keep it. As always, I should have never questioned her expertise. This tool literally comes in handy for random jobs like this one way more often than you would think. Buy a funnel for your house… I promise you’ll put it to great use. But enough about funnels it’s back to business. Now that the soap has filled the bottle, simply place the pump into the bottle and push down on the pump until the cork is in place and the bottle is sealed. But the real question here is… How would you use Patrón Bottle(s) to create art? On second thought… maybe don’t tell us your creative secrets! Instead, why not get to work on this amazing project & submit it so you can be the big winner? We’re totally cheering for you…. or shall we say “cheers”-ing for you?

Either way, get the submission details here and DO IT!  $10,000 for one craft… or $1,000 for the 9 finalists. Tag #ArtofPatron so we can check out your project(s). And FYI, we are not submitting our projects into the mix since we are part of the Art of Patrón judging panel. PS. While you’re out getting supplies for your winning art project, pick up a funnel too! You won’t be disappointed. <– Life Changing. #pinkypromise