Hi again.  It’s Casey’s mom, Janimal, here, with my second blog post.  Last week, I told you about the first steps I took to downsize and move from my large home in a southwest suburb of Chicago to a small condo in the heart of the city.  Honestly, it was such a long, complicated process that the only way to tell this story correctly is to break it down into three parts. 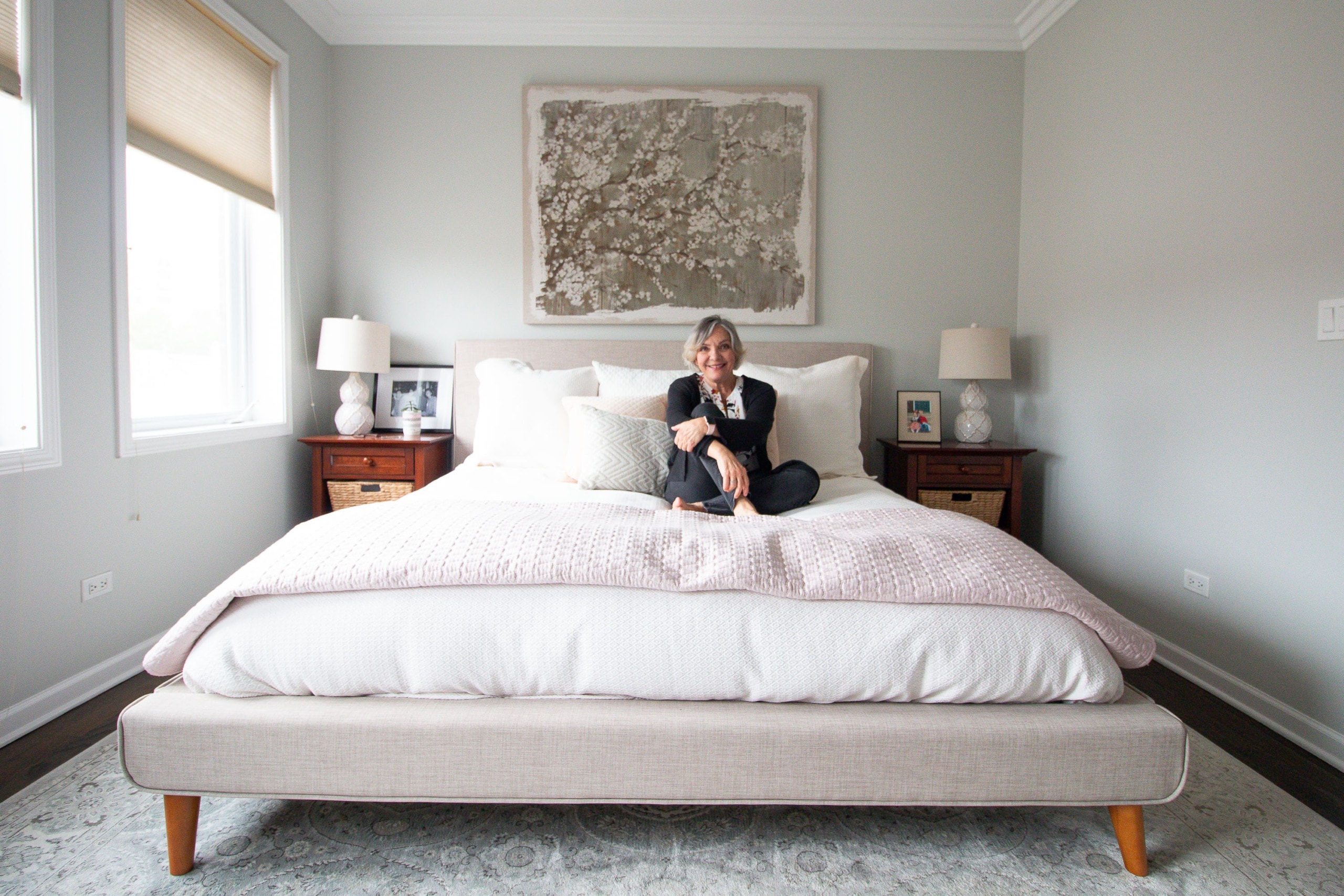 So, this week, I will be sharing with you the next steps I took to put my suburban home on the market, to start purging all of my belongings, and to move to a temporary rental home in Chicago.  Next week, I will conclude the series with how I found my new neighborhood, the amenities that were important to me in my new home, and how I decided on my brand new style!

When I left you last week, I was beginning to overcome my fear and starting to imagine my new life. I was envisioning living in a smaller place in the city,  spending much less time commuting to work and visiting my children and grandchildren more often.  Let me tell you,  those daydreams kept me going for a long time, and the more I imagined, the more determined I was to pull the trigger.  I realized that no one was going to do this for me, so if I  was going to change my life, it was up to ME and only ME to make it happen!  I held my breath and jumped right into the process. 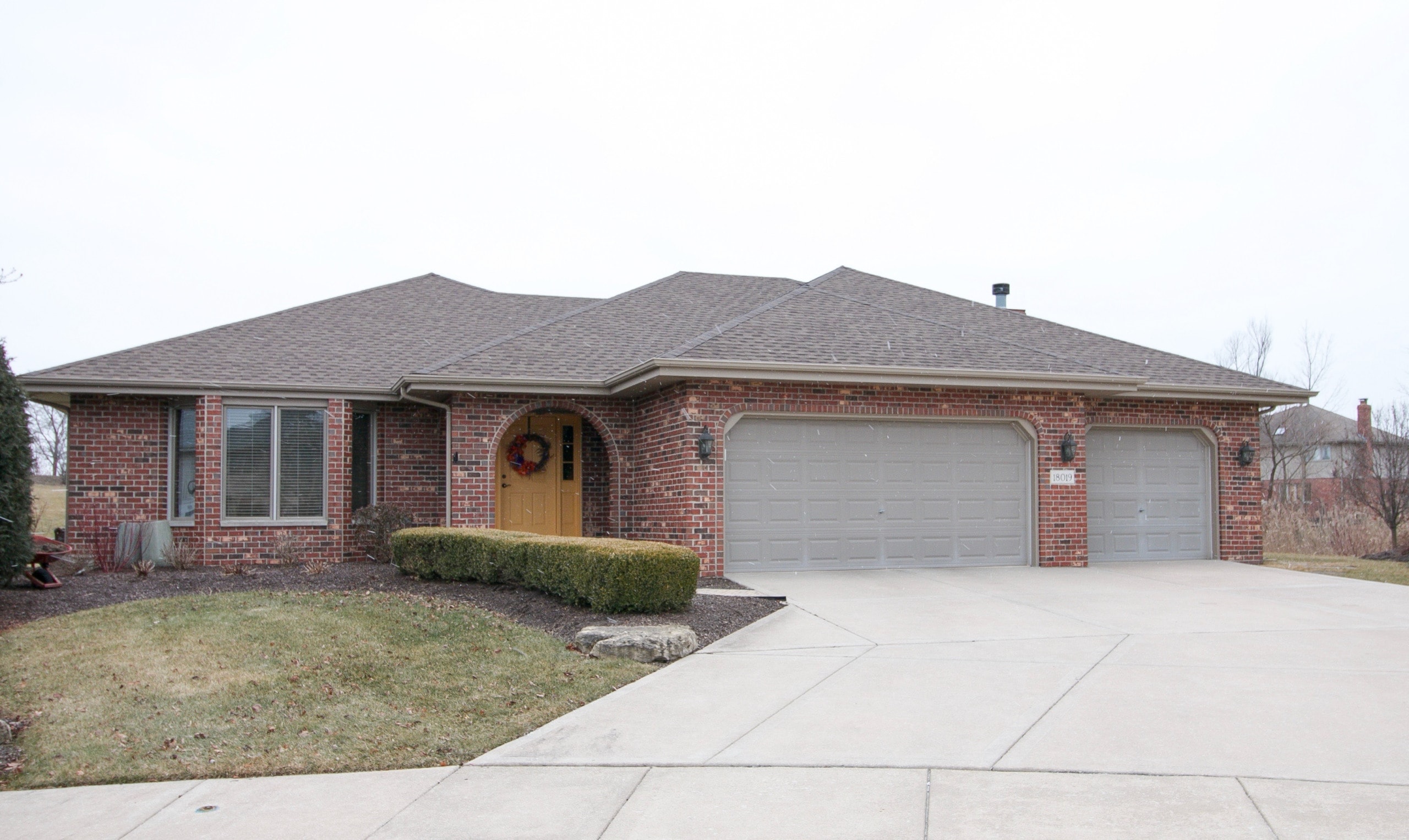 I was reasonably sure that my home would sell quickly because I had been meticulous about keeping it clean and organized and I had also updated the kitchen and the laundry room. I had made minor improvements with paint and lighting in the other rooms of the house, as well, and overall, I thought it looked pretty good.

I had even had a brand new roof installed.  I made an appointment with a local realtor and I had him come out to look it over and we settled on a listing price. 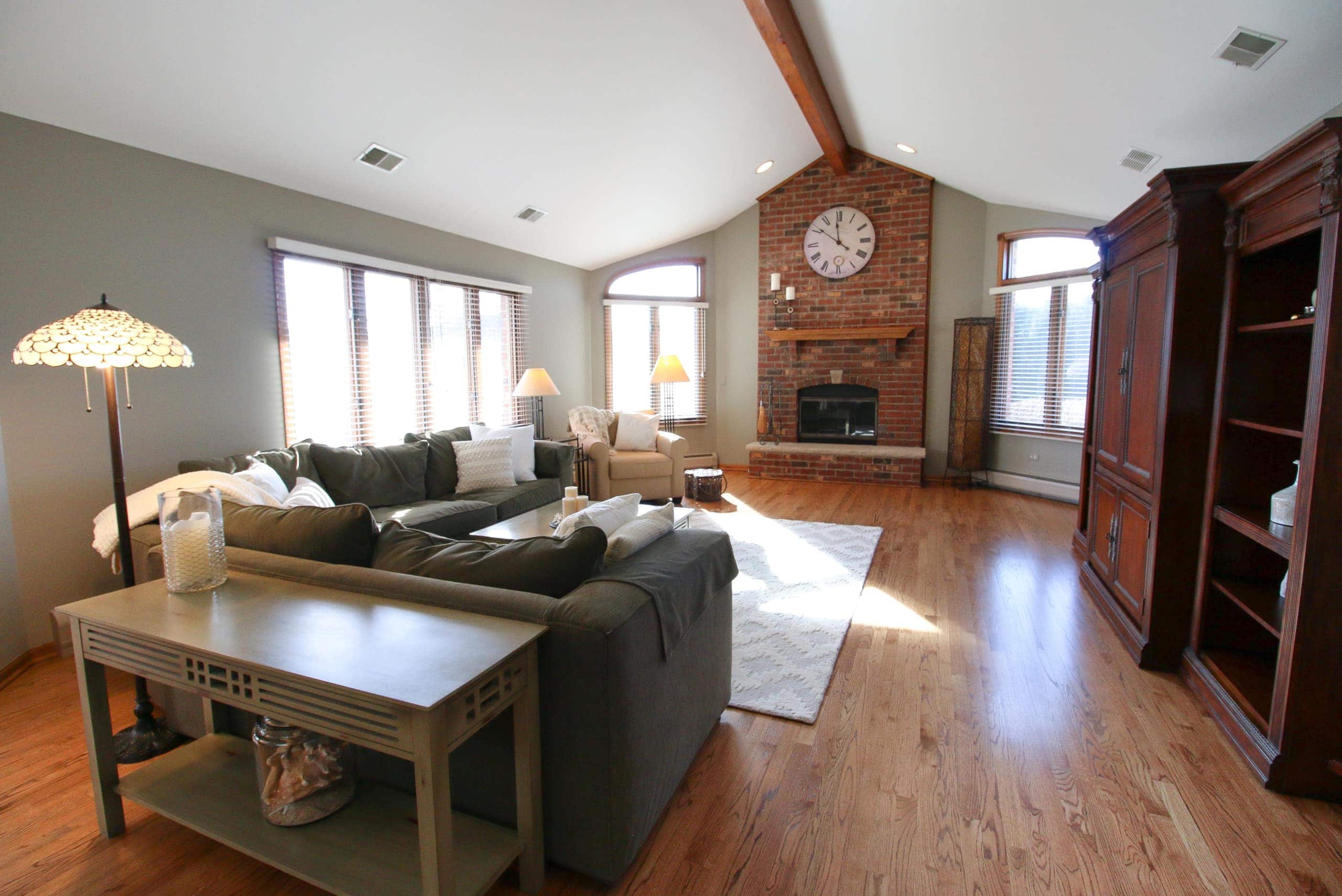 Casey took photos of each room for me and before I knew it, the listing was up and live. 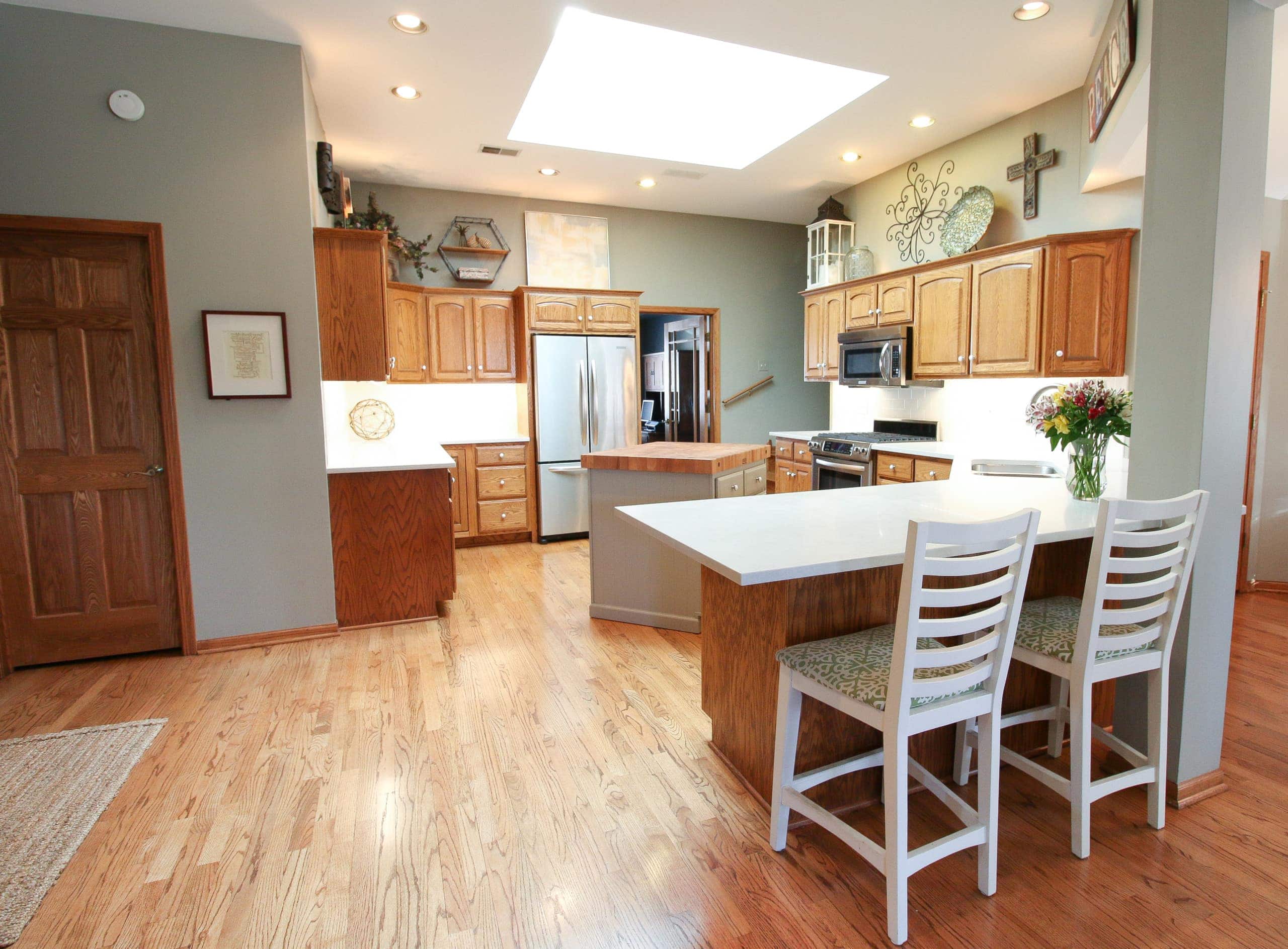 This is the part that I had been dreading ever since I started thinking about selling my home.  How in the world was I going to empty every closet, the crawl space, the attic, the garage, the shed, and get rid of rooms and rooms of furniture?  I had to purge and I had to purge BIG TIME! And fast!

The first thing I did was invite my four children and their significant others to come stay with me for the weekend and help me with the purging process.  After all, a lot of the boxes I was storing in my home held their childhood mementos and treasures. I even had a closet that held eight different used prom/homecoming dresses!  Eight!  I knew I was never going to use those dresses, but I sure hoped that Casey and Liz would take them home with them!  Wrong!  I mistakenly believed that they would be happy to get all of their things back and would gladly take everything home with them, leaving me with some empty closets.  What I wasn’t remembering is that they all lived in small places themselves and they didn’t have a lot of storage.  They couldn’t take home all of this stuff, so purging was even more important for all of us. 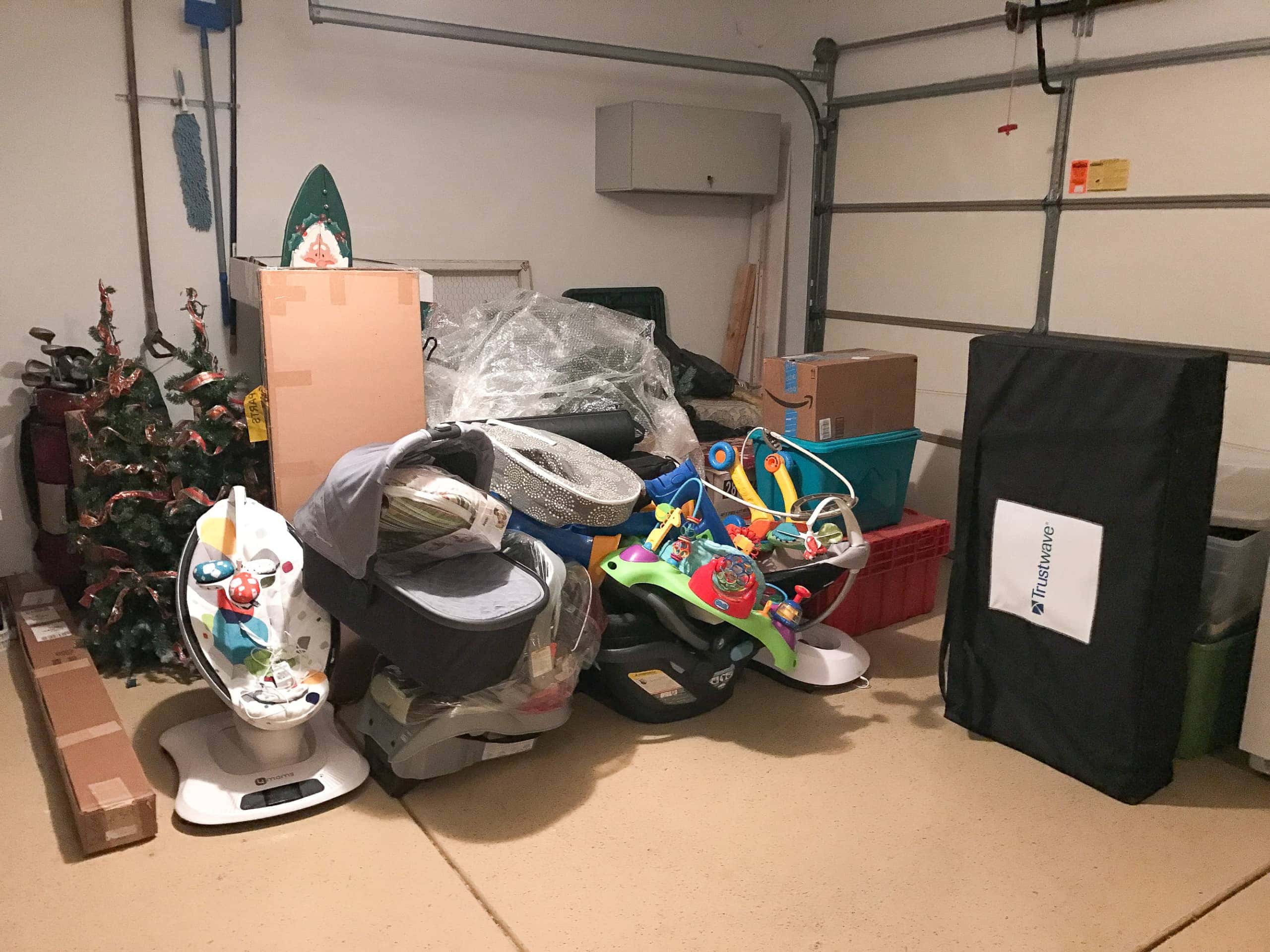 We began to purge one closet at a time and we created huge piles to either “throwaway”, “giveaway” or “give back to the rightful owner”.  We purged many closets and a part of the crawl space that first day.  We loaded our cars a few times and took things to Goodwill, Salvation Army, and St. Vincent de Paul.  All of my children took home a few things, but not very much.  What I soon realized is that they just didn’t want all of the stuff I had been keeping for years and years and they were never going to want it! Once I got that concept through my head, the purging process became a whole lot easier.  Even after the kids left, I had a new determination to purge and give away without any guilt!  I kept thinking, “They had their chance and they didn’t want this, so let’s find this (fill in the blank) a brand new home!” 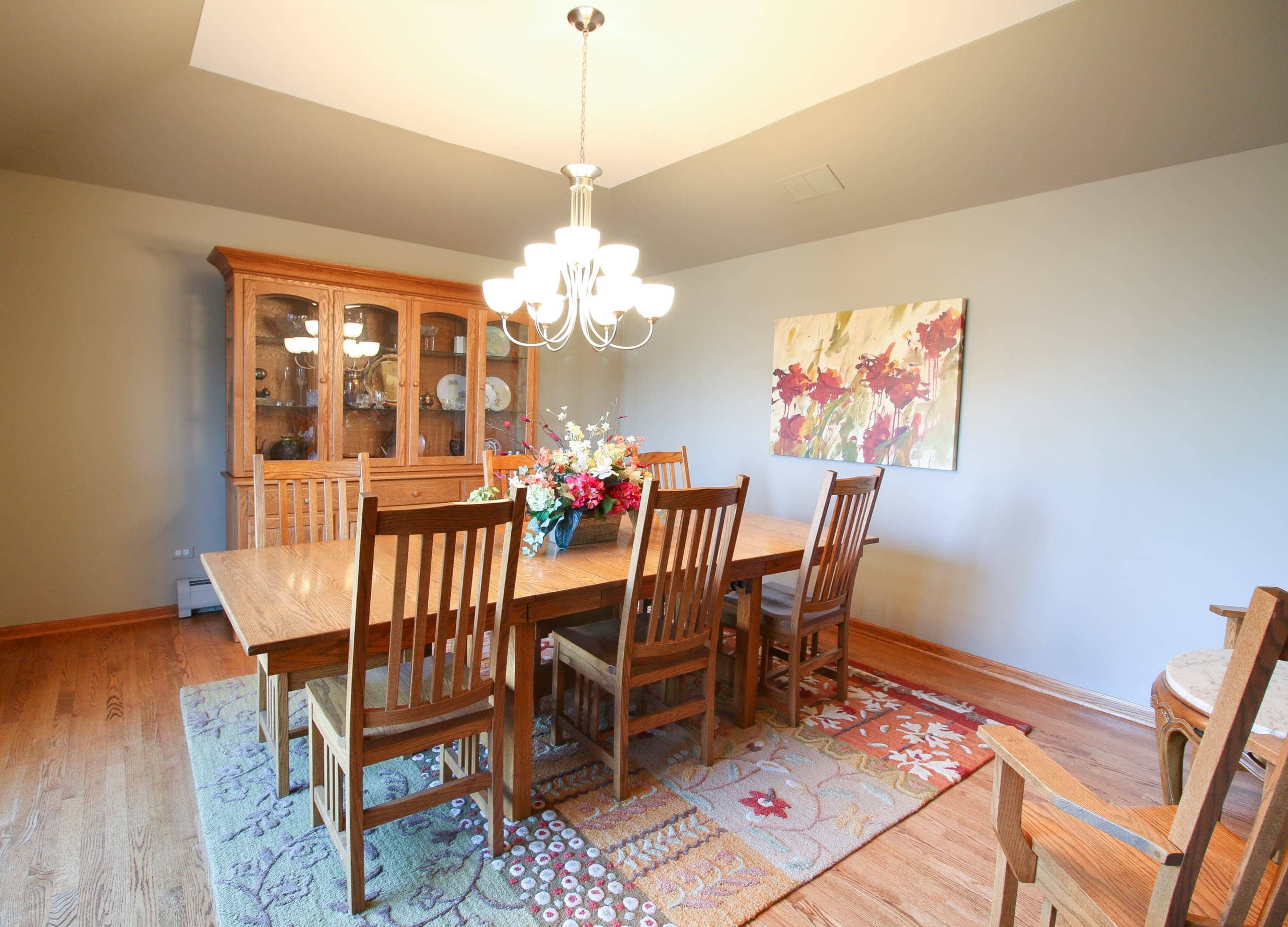 My suburban home was completely filled with furniture when I started my purge.  That meant I had four bedroom sets, a complete dining room ensemble, a full office, a family room, a full basement,  a large deck with outdoor living and dining furniture, a full garage AND a shed with tools and equipment!  Yikes!  All I could possibly use in my new place would be two bedroom sets, a kitchen table and chairs, and a family room grouping.  Everything else had to go! It makes me anxious just thinking about it right now!

There was one important thing that was happening at this time, that made my purging process a lot easier – my two sons were getting ready to move from their smaller condos to much larger homes in Chicago!  That meant that they actually needed some furniture to fill up their new spaces.  As they say, “Timing is everything”! 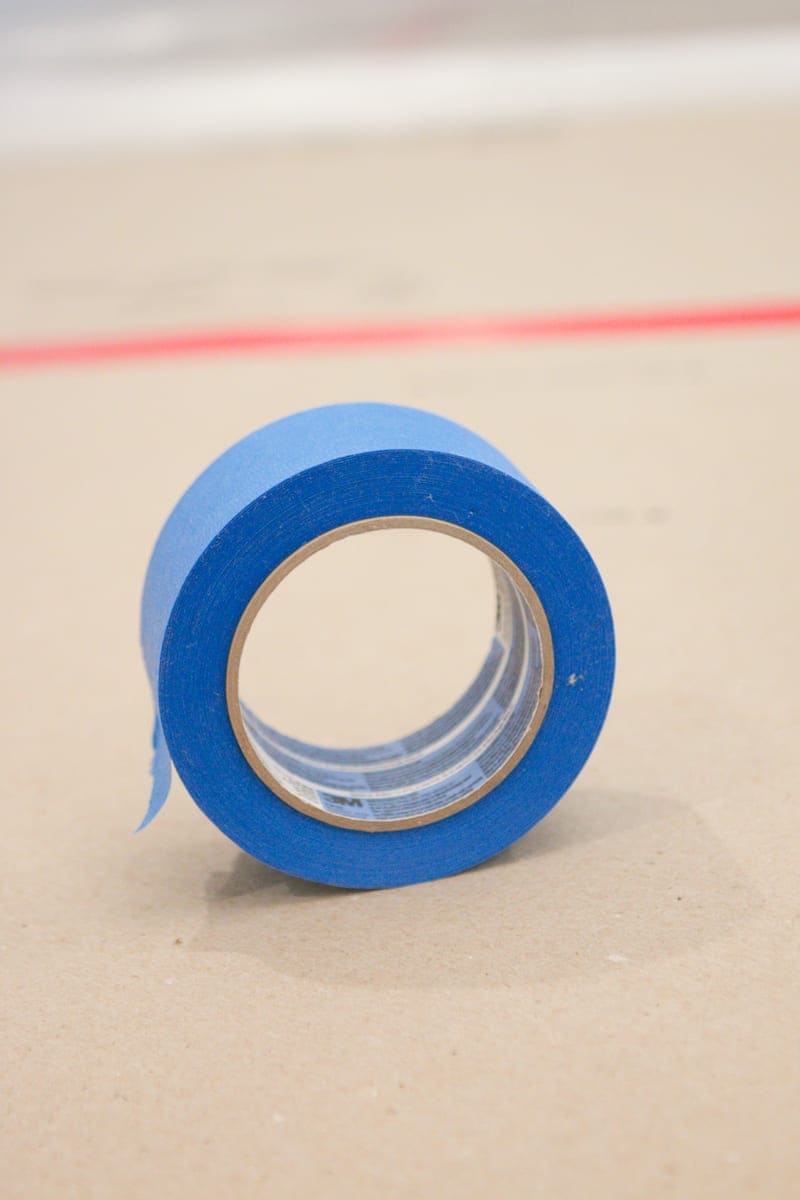 The next purging task was to gather all of my children and their significant others again and lead them, room by room, through my home so they could examine each and every piece of furniture and lay claim to what they wanted.  We took a roll of painters tape and marked every piece that they could use in their homes.  That was really helpful!  They laid claim to two whole bedroom sets of furniture, all of the patio furniture, bookcases, some chairs and lamps, paintings, tools, the snowblower, and lots more! 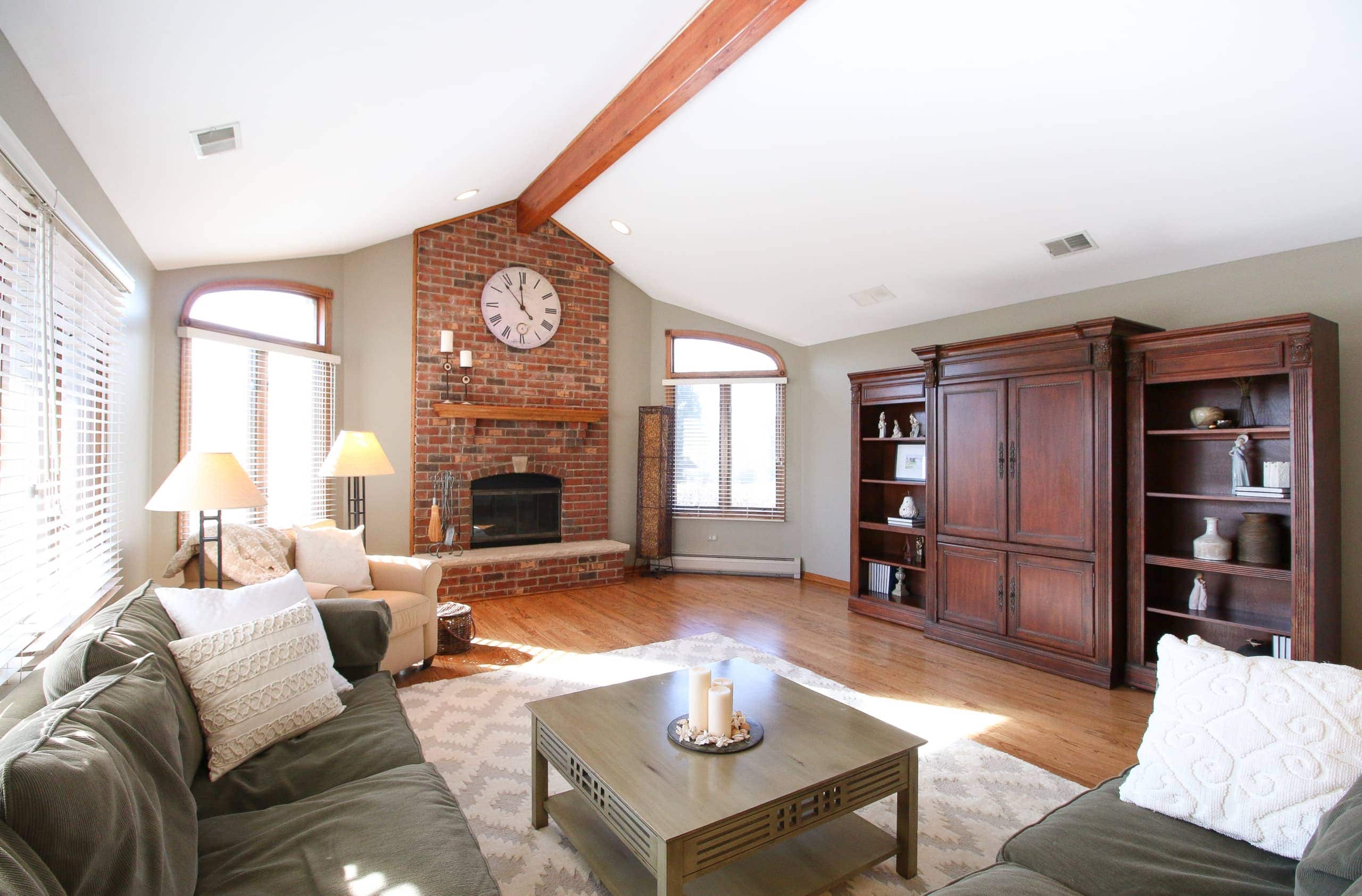 Even though many of the pieces had new homes, there was a whole lot of furniture left that no one could use, so I had to figure out a way to get rid of all the rest.  Luckily, Finn is a master at selling things on Craigslist (you can read his tips here). He had sold a number of furniture pieces over the years with great luck.  So, he and Casey took over this difficult task for me.  I first identified everything that I wanted to list and they took it from there.  First, they took some good photos of each item; they measured all of the dimensions and they came up with a helpful description to go with each piece.  Finn didn’t want people contacting me directly, so he became the “middle man” for all my transactions.  People would contact him if they were interested in a piece; he would negotiate the price and then he would set up a time for them to come and pick it up from my home.  I got rid of so many things that way and I will be forever grateful! Thanks, Finn! 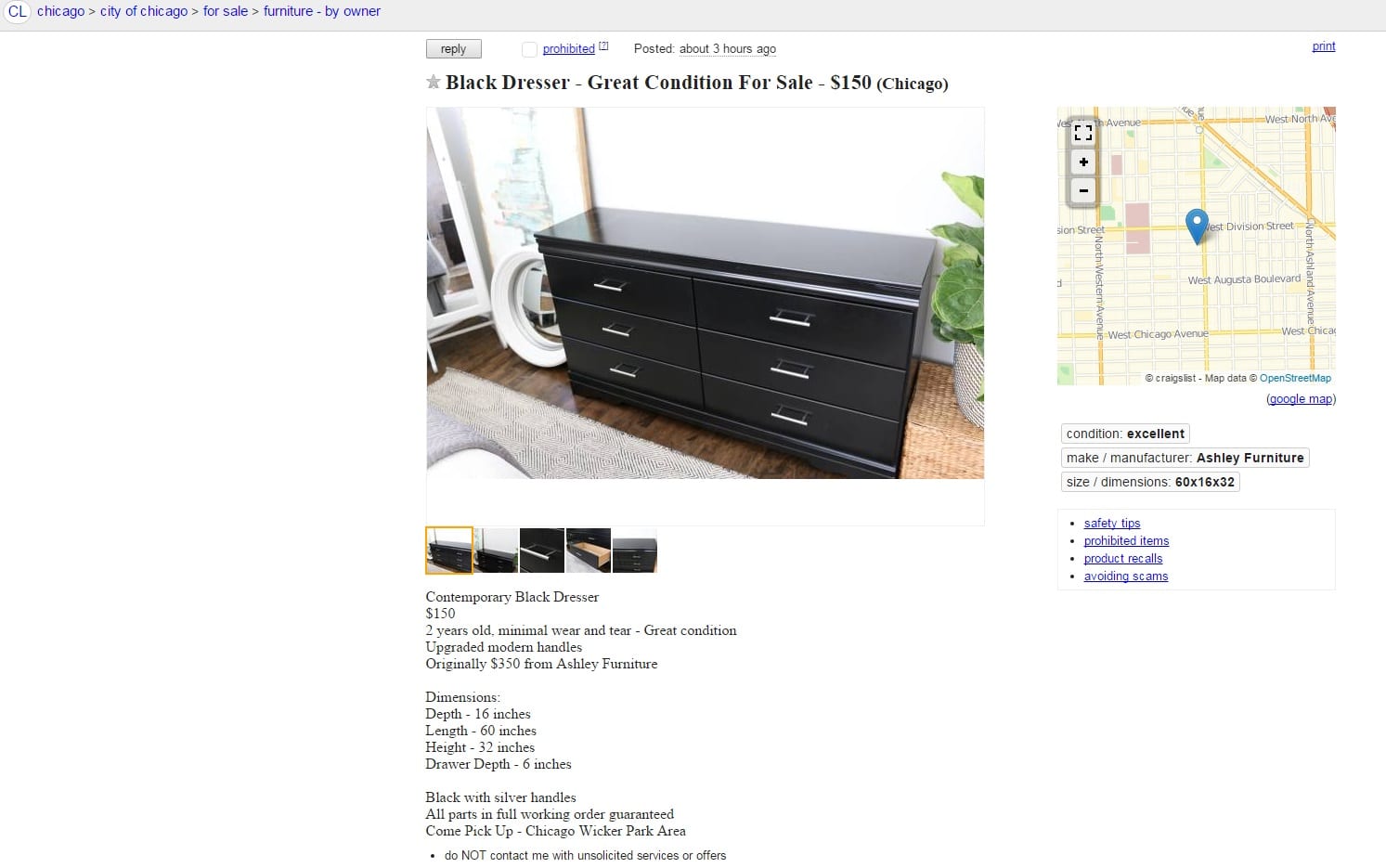 It took a few weeks to get rid of all of the remaining furniture, but eventually, everything I wasn’t taking with me had new homes.  I sold some of the things through Craigslist, but, in the end, I ended up giving much of it away.  (One of Finn’s friends had just bought a summer home and he and his wife were happy to take a lot of the furniture.) Every time something went out the door, I would do a little happy dance!

No Place to Go!

During this whole process of purging, selling, and giving away, my house sold!  It took less than a week and the deal was done, but even though I had been spending my free time searching for the perfect condo in the city, I hadn’t found anything! Now what?  Again, “Timing is Everything!” 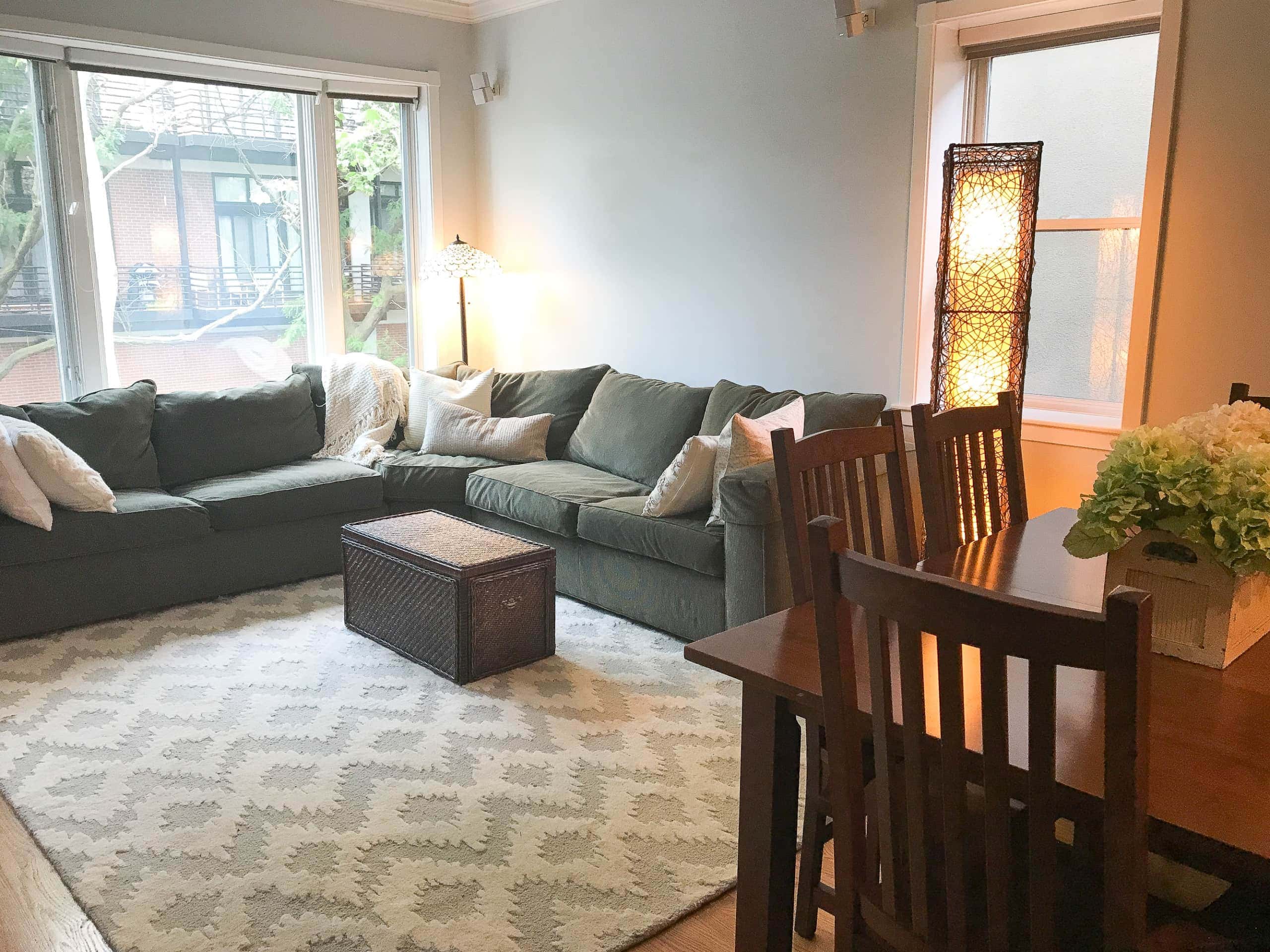 As I said earlier, my sons were getting ready to move into larger places in the city and Ryan hadn’t yet sold his two-bedroom condo in Wicker Park.  That was my saving grace!  Ryan offered to rent his condo to me for a short time until I found my perfect home!  I can’t tell you what a relief that was!  I am still grateful – thanks, Ry! 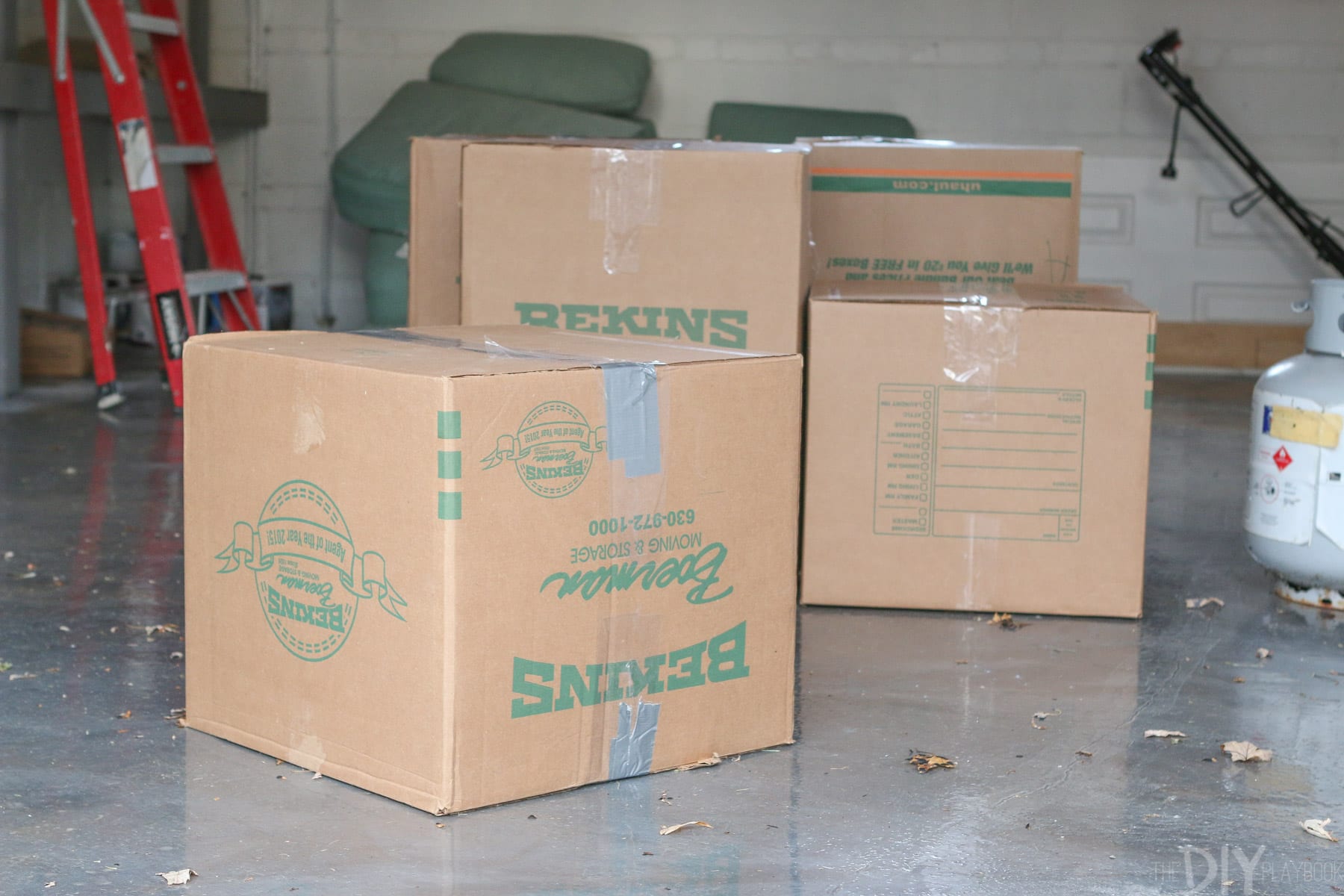 Honestly, this could be a whole post in itself because this move was for three households – mine, Ryan’s, and Harry’s.  And it all happened over two consecutive days!  Harry did all the negotiating with the moving company and set up the timeline for the three moves.  Once again, I am so very grateful – thanks, Harry! Remember when we went through the house and identified all of the pieces that everyone wanted?  Well, next, I went back through and labeled every single box, item or piece of furniture either “1”, “2” or “3”.  If something was labeled “1”, it was supposed to go to Harry’s new home; “2” was to go to my condo, which was Ryan’s former home, and “3” was headed to Ryan’s new home.  Bless those moving guys! I doubt they get jobs like this one very often!  Casey has also shared lots of tips for an organized move if you want more ideas!

They started at my home, out in the suburbs, and they packed everything up in the truck, according to number.  Next, they headed to Harry’s condo and loaded up all of his furniture into the same truck.  The next stop was Harry’s new home, where all of his things and all of the “1”s from my place landed.  After that, the movers headed to Ryan’s old condo, where they had double duty – they took all of my things – the “2’s” –  out of the truck, because this was my new temporary home, and they loaded up Ryan’s things and all of the “3”s to go to his new place!  (Are you lost yet?). Finally, the truck headed to Ryan’s new condo where the movers were happy to leave the rest of the items!  (I bet they had lots of stories to tell about our crazy family!) Whew! 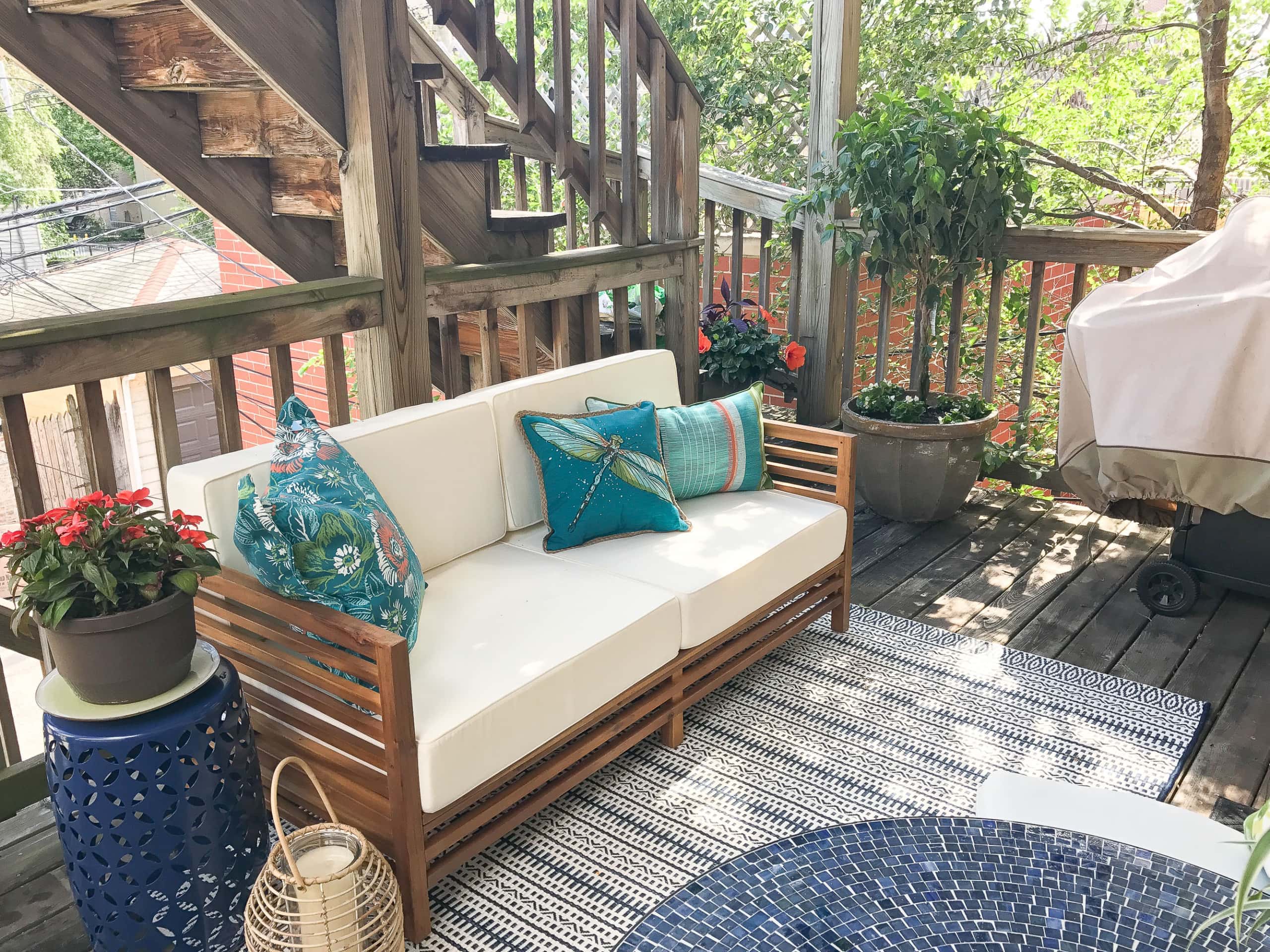 Even though I was now living in the city, in a beautiful condo in a great neighborhood, I knew this wasn’t going to be my forever home, but now I had the luxury of time, thanks to my son, Ryan.  In my next blog post, I will tell you how I found my new place and FINALLY decided on my new style.  See you next week!