This year, our house turned 100 years old! Yep, our house was built in 1921 and the moment the year turned over, I applied to our neighborhood association to get a plaque on our house as an official “Century Home.” To say I was excited when it came would be an understatement. I was giddy and Finn kept laughing at me. But I really just thought it was so damn cool to showcase our historical home and I immediately added the plaque to our front porch. 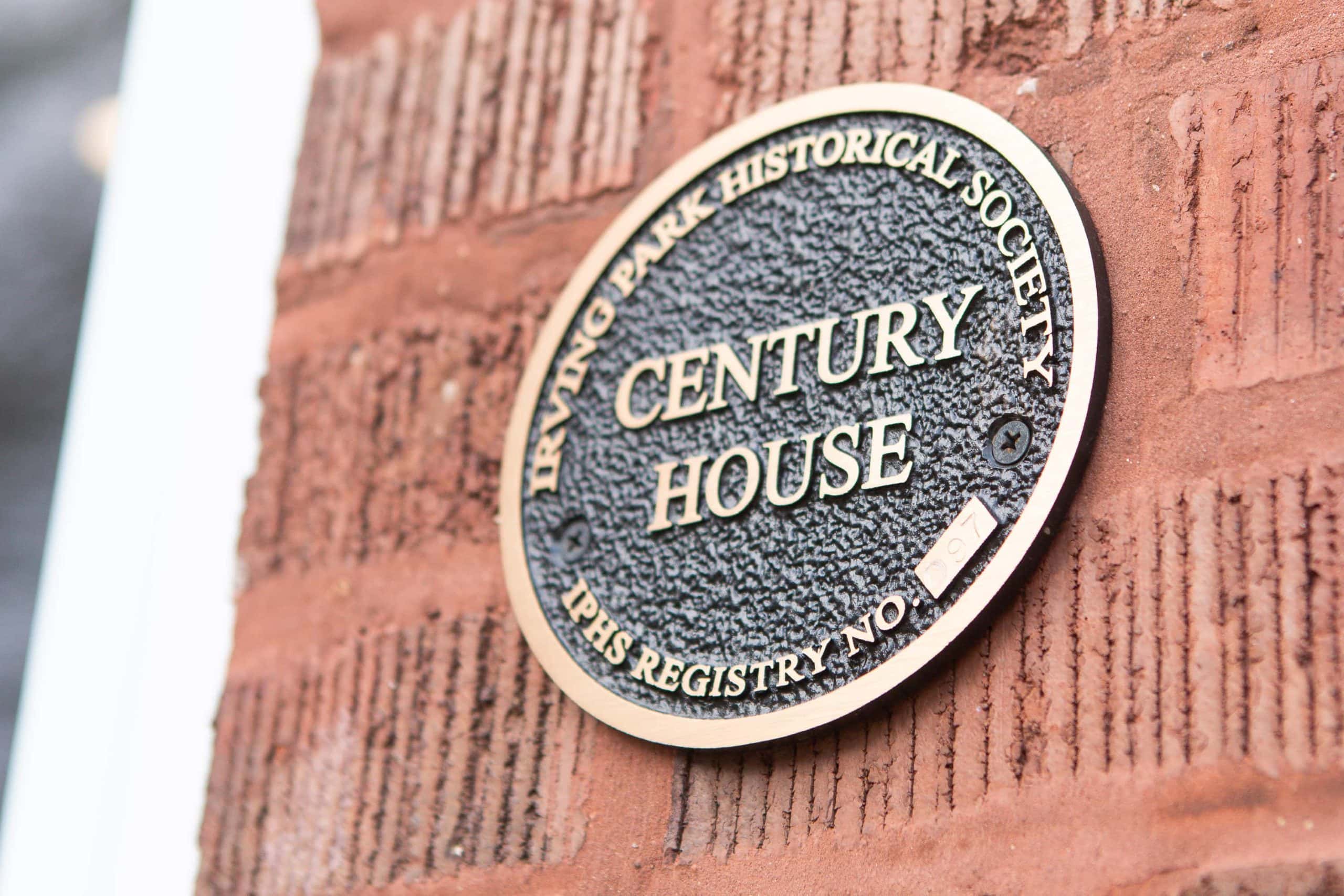 But when your house is this old, it comes with a lot of issues that aren’t always fun to fix. Of course, we love tackling cosmetic issues like a new kitchen or bathroom, to improve the look of the home, but there are always less glamorous tasks to be done. 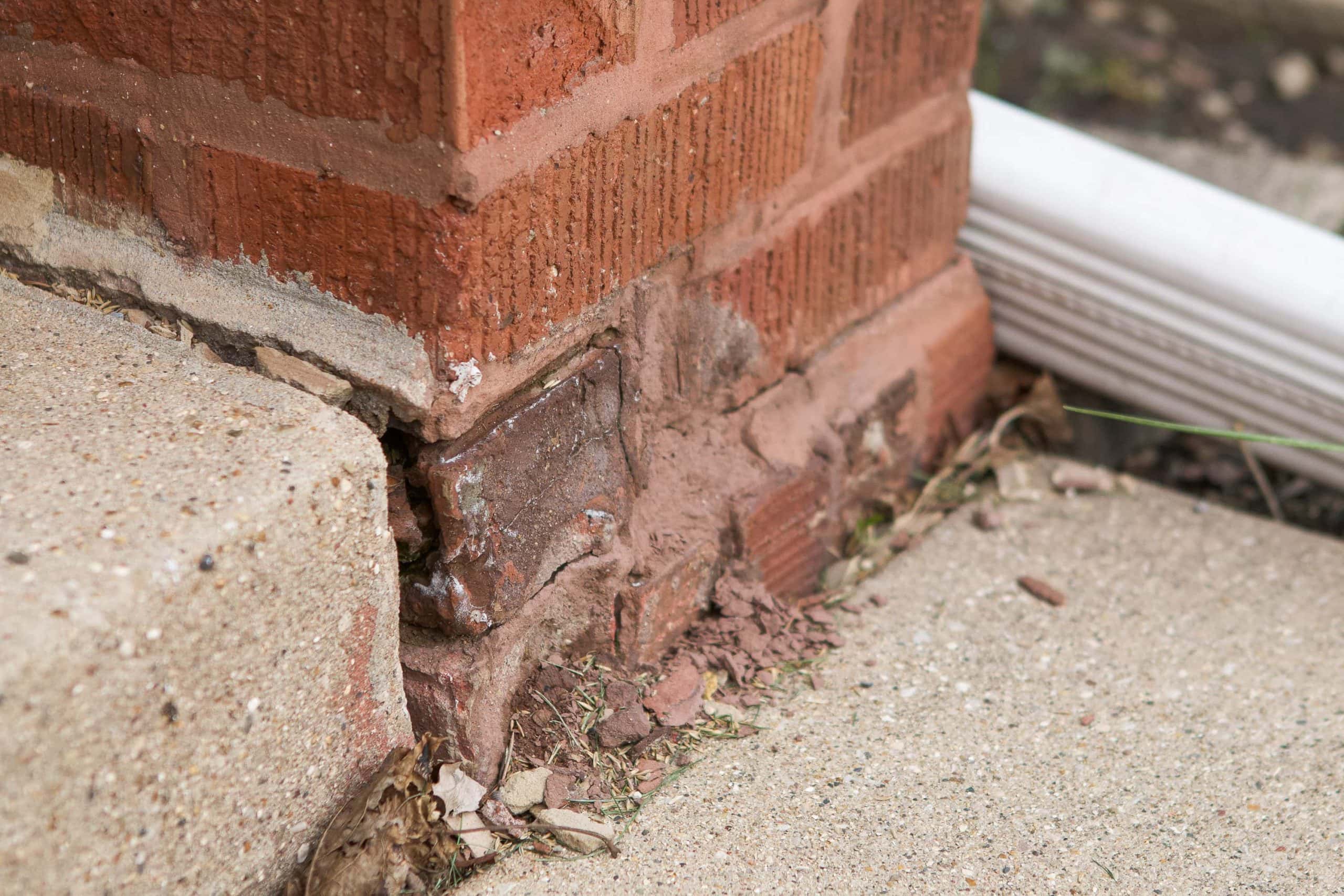 One of these tasks? Repair the crumbling brick and mortar on our exterior. The front of our home has traditional red Chicago brick and in some spots, it was in really rough shape. 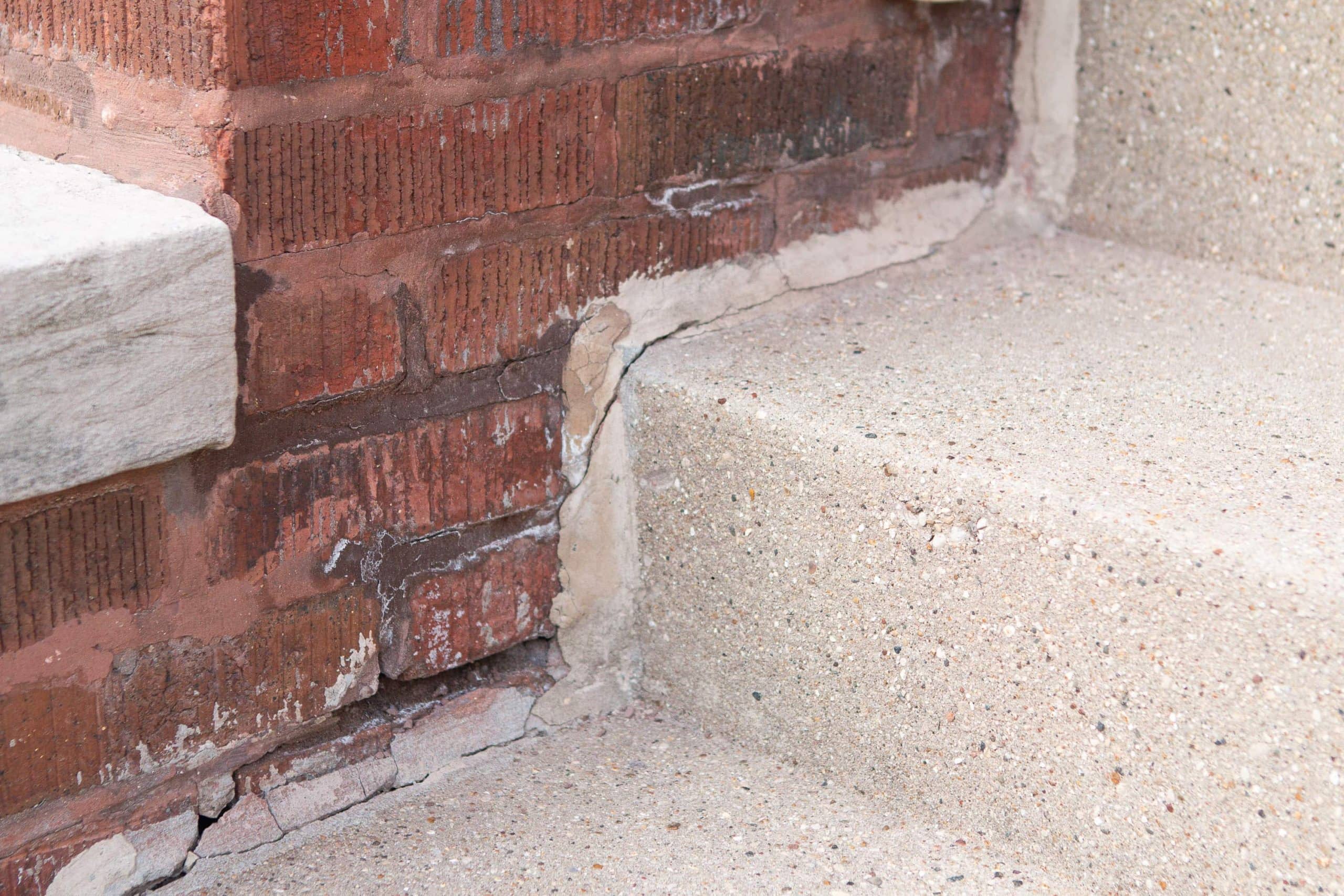 The mortar joints were also crumbling badly in some areas, specifically near our front porch. You can see how they have deteriorated over the years in our front stoop pictures… See how those joints along the sides and bottom of each step get looser and more crumbly year after year? While I didn’t want to spend money on fixing this –  it never feels sexy to spend hundreds to thousands of dollars on repairs –  it’s essential to stay on top of home maintenance tasks like this, before they become bigger and more expensive issues. The last thing we want is a water problem that affects our foundation, so I vowed that I would find a pro to fix our crumbling brick and mortar this spring. Oh, and I know someone will ask… I didn’t at all consider DIY’ing this project. Some projects are best left to the professionals, and finding a dedicated mason who is devoted to his craft was a much better idea than me trying to do this myself. It took three professionals an entire day to do this project, so I can only imagine how long it would have taken me to do this and how poor the end result would have been. Ha!

A frequent question I receive is about finding the right tradesperson for the job. How do you find a trustworthy pro? To tell you the truth, it can be tough. I’ve had the most luck asking friends, family, and neighbors for referrals. I’ve also had some luck with the website, Thumbtack, to find tradespeople for specific jobs around the house, like the electrician who installed our sconces.

I’ve never hired a mason before and honestly, I had no clue what this project might cost us. We have a neighborhood group where people can post questions or items for sale, so I asked there for mason recommendations. I received about five good referrals and started making calls. 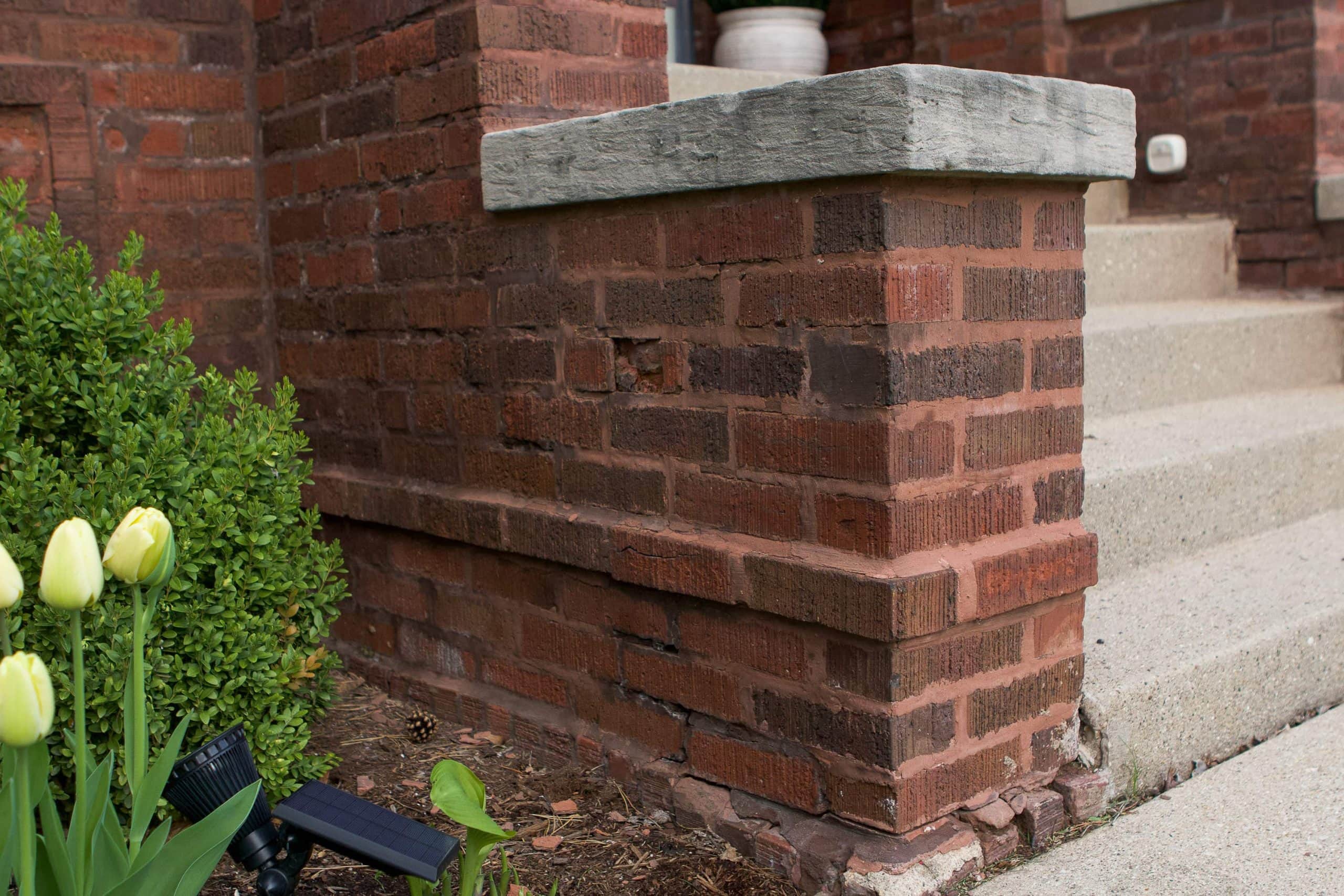 In the end, I had three different masons come visit our house to check out the project, tell me how they would repair it, and give me quotes. When I’m hiring a professional, I like finding people who are good at communicating – like telling me when they’ll arrive, sticking to their word, getting back to me with an estimate in a timely manner. They also need to  understand the scope of the project and present a detailed estimate and proposal.

While cost is a factor too, I try not to let that sway my decision. Going with the lowest quote isn’t always the best idea. Be sure to shop around, interview at least two to three professionals, and then hire the best one for the job.

One of the main reasons I hired the team that I did was because they were dedicated to finding matching red brick to replace the crumbling bricks on the front. We had about five to six bricks that needed to be removed and a few of the people I interviewed told me it would be impossible to match the color, since it’s 100 years old and they don’t make brick like they used to. The guy I hired was hellbent on matching it and told me he shopped all over the city to pick up bricks that would look seamless with the rest. I appreciated the dedication to his craft and hired him immediately!

Note: If you’re local and need a mason, I’m happy to pass along this professional’s information. He and his crew did an excellent job and I was so pleased with them. Shoot me an email at [email protected] and I’ll send his contact info along.

Repair day came and whoa…I was not prepared for the mess that was about to take place in our front yard. The fact that the three-man crew was wearing head-to-toe paint suits, masks, and goggles should have tipped me off that things were about to get messy! Oh, and notice the donuts in the above photo… it is always nice to have treats ready for anyone working on your house! 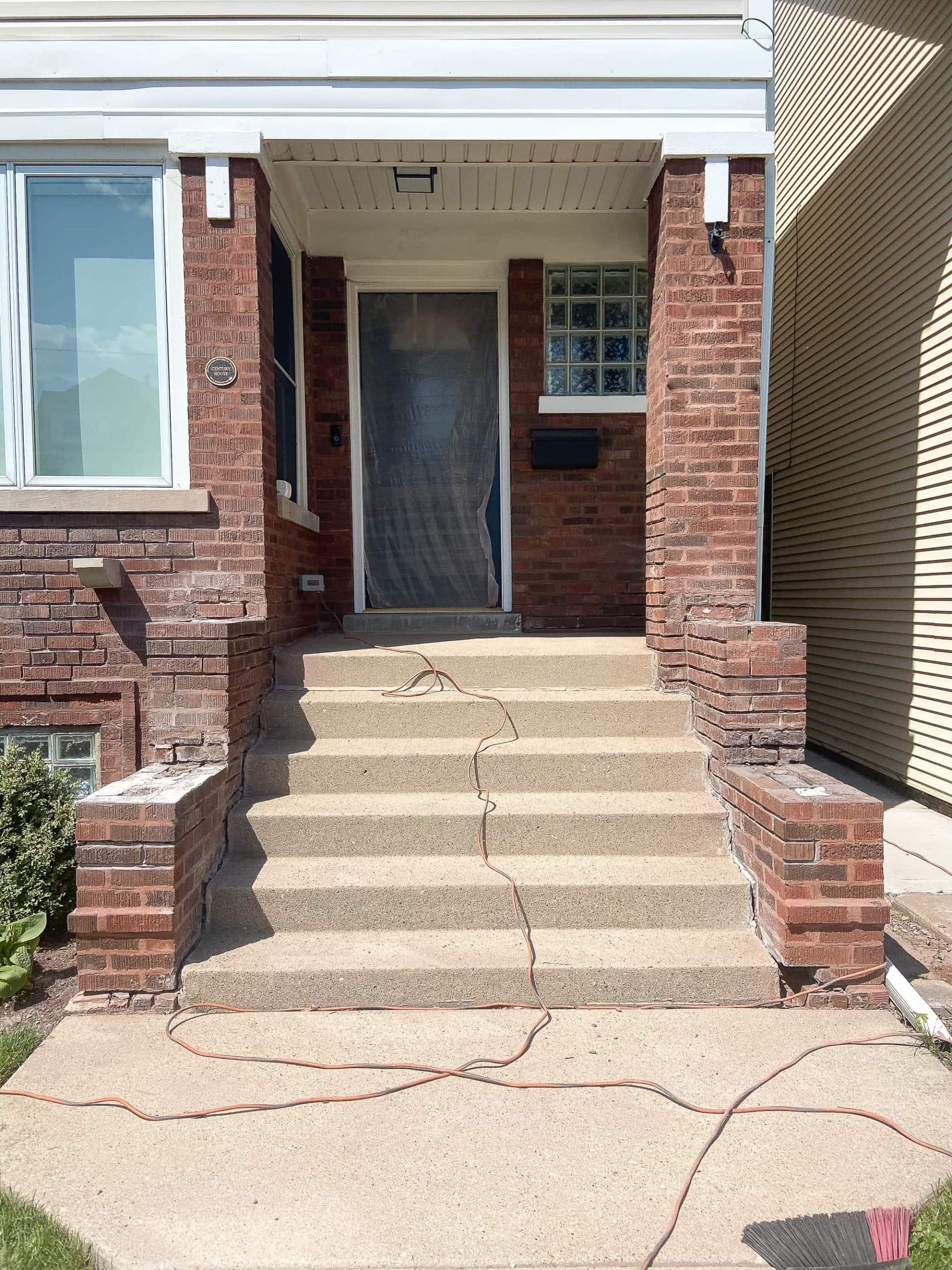 They chiseled out all of the mortar on the front of the house, removed the four stones on the porch walkway, and removed the crumbling mortar along the steps. They also took out five or six crumbling bricks to repair. Because our bricks are red, there was red dust everywhere! It was like the Dust Bowl at the front of our house and we could barely see out the window. 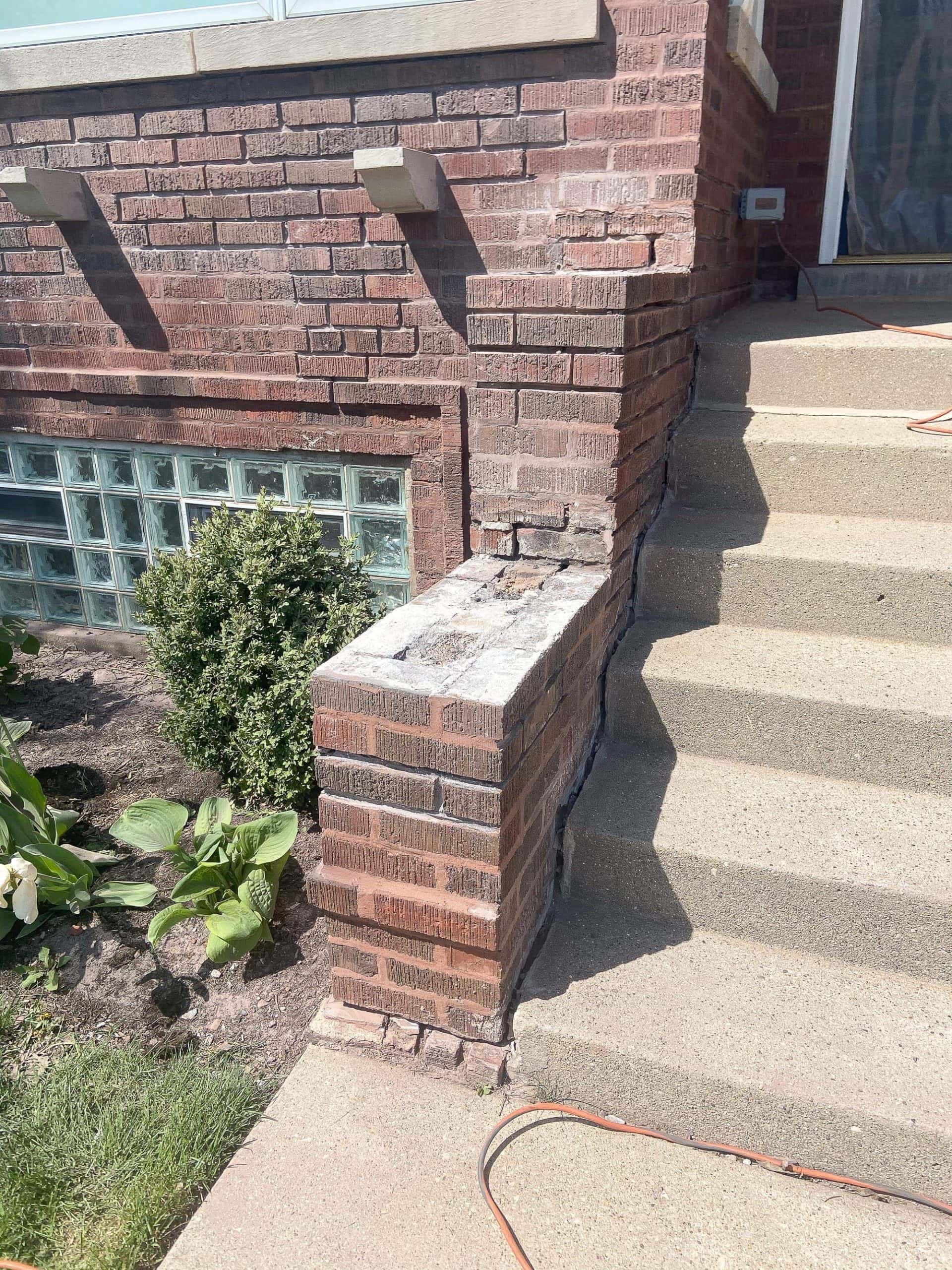 Rory was very intrigued by what was happening outside and she kept pointing at the window, wanting me to pick her up to see outside and wave at the workers. Too cute! 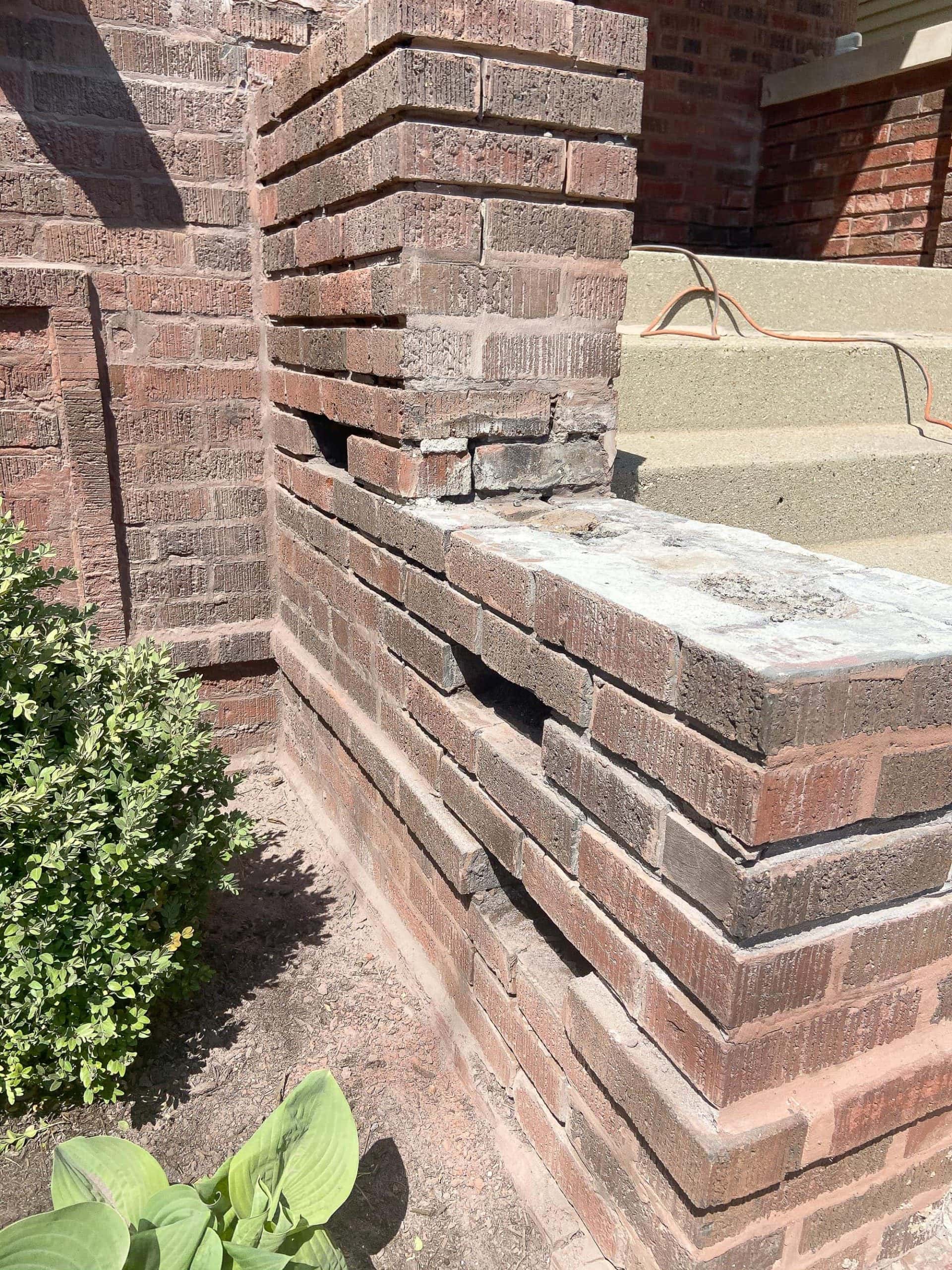 It took the guys an entire day to replace the bricks, fill in all of the mortar they scraped out, add flashing underneath the four large platform stones, and repair the front porch. But when they were done it looked so.much.better. 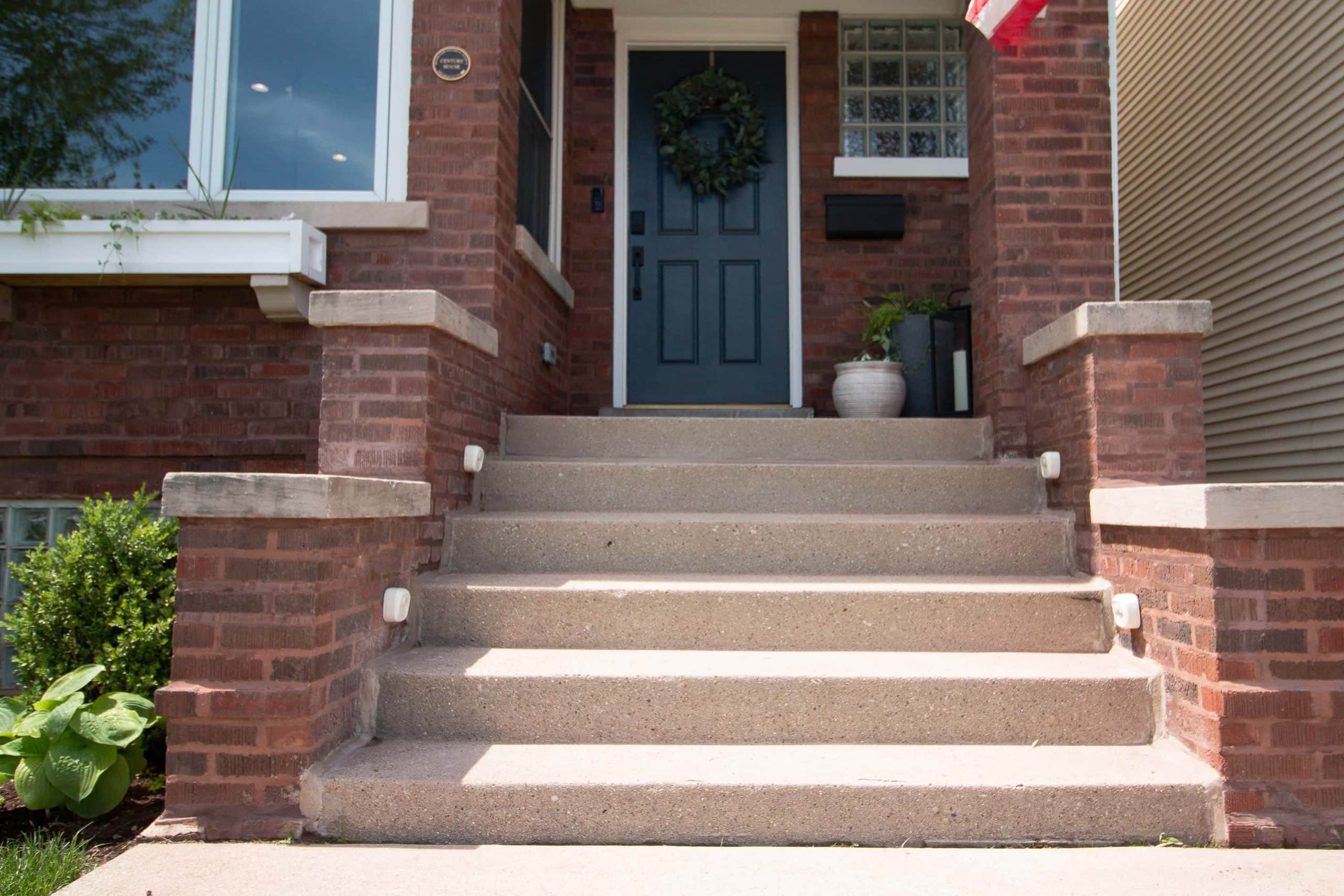 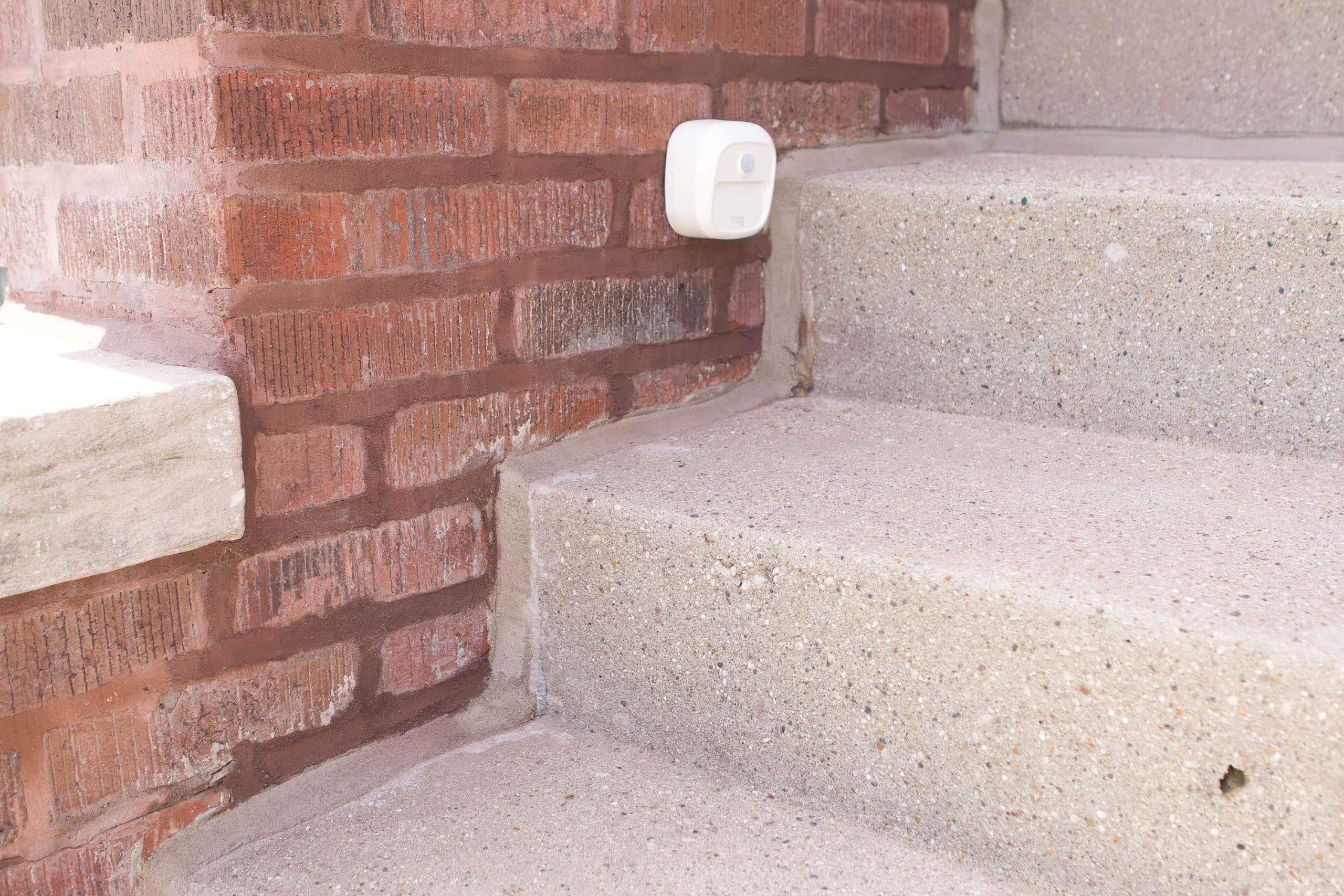 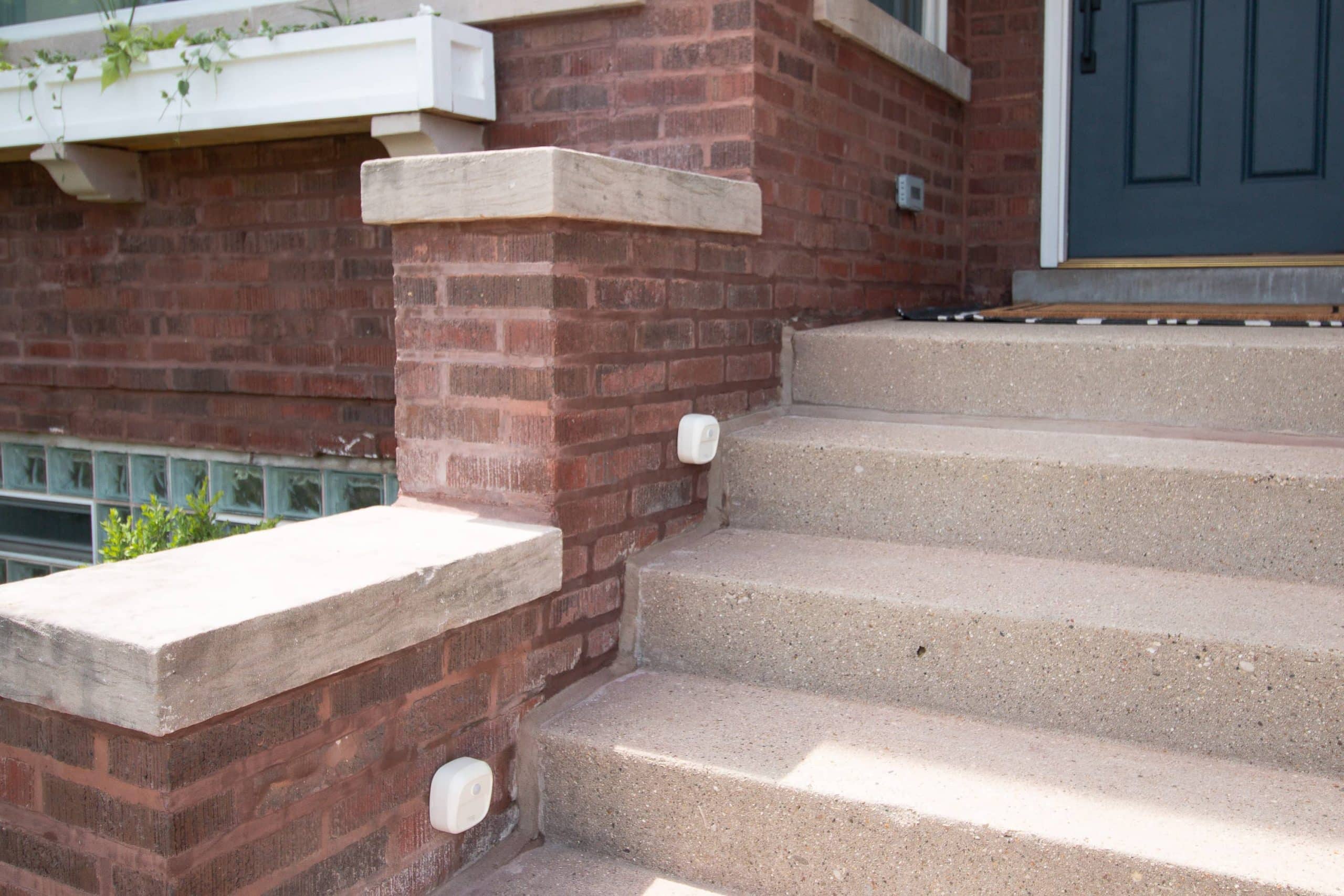 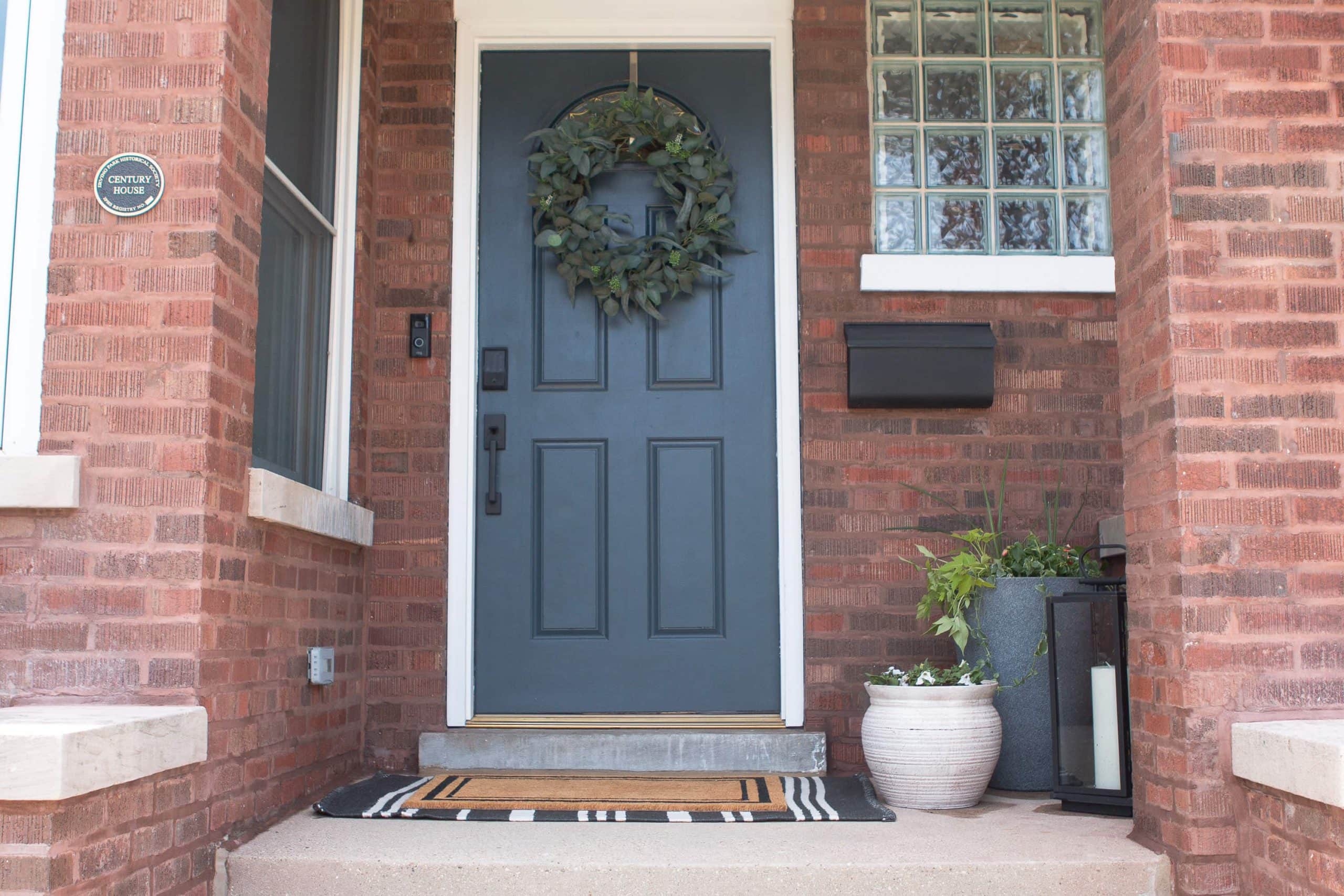 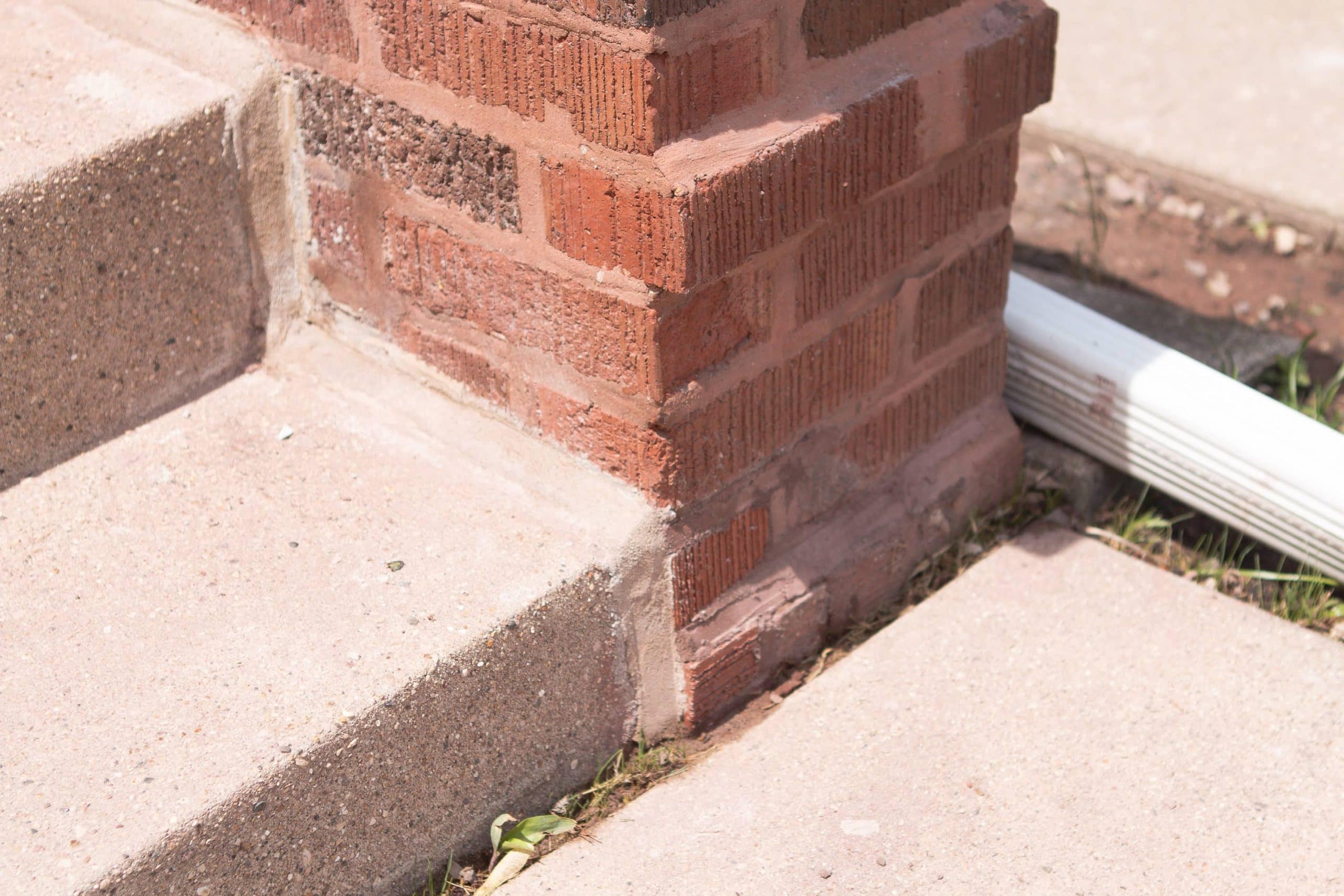 When getting quotes from various masons, I received estimates ranging from around $800 to $2,200. In the end, this project cost us about $1,200. It’s a lot of money for something that isn’t the biggest transformation in the world, but we like to be as proactive as possible when it comes to home repairs, like this one. Prevention is key when it comes to home maintenance. Fix issues now before they become bigger problems down the road. 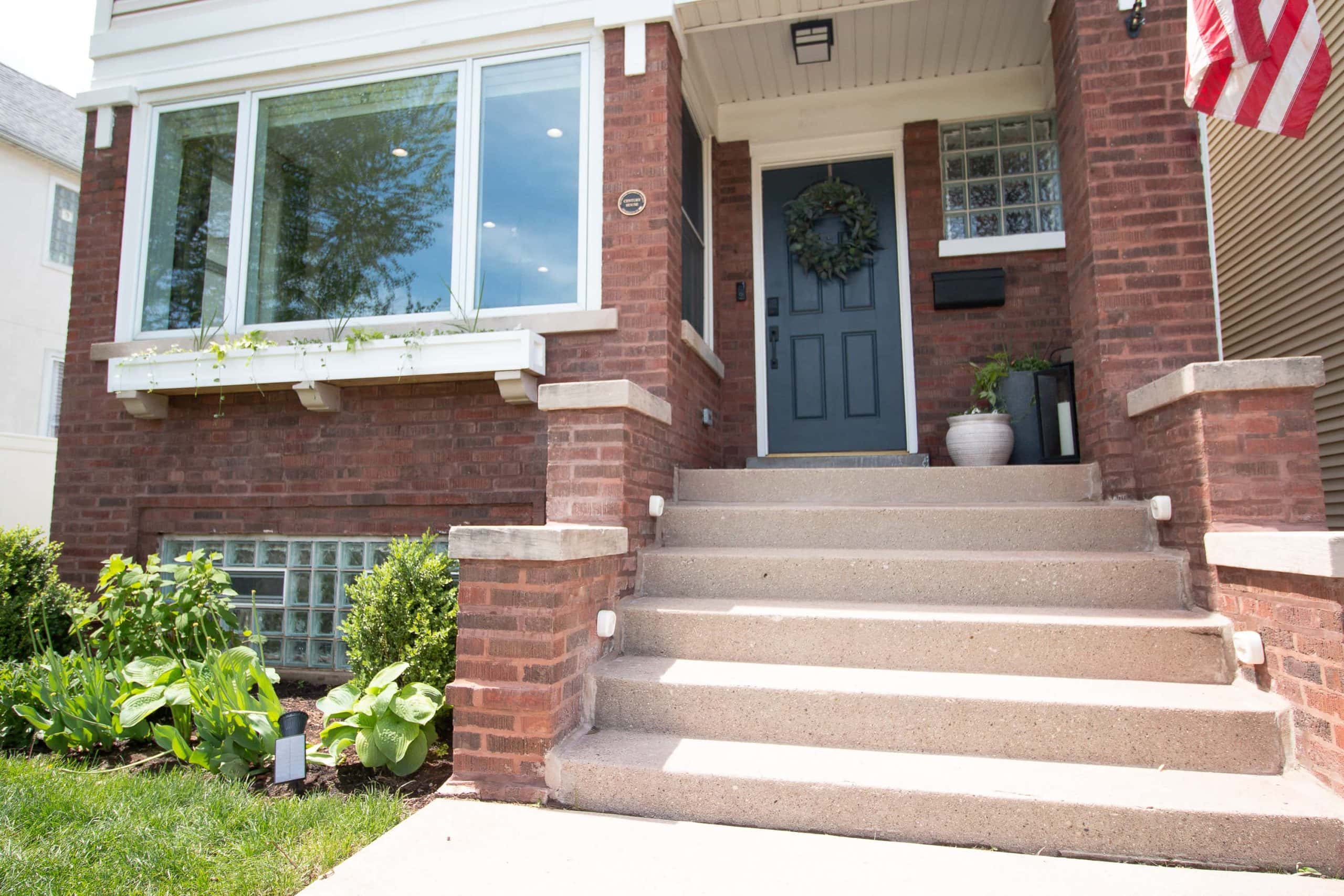 So there you have it…the tale of the exterior of our home. I’m hopeful that with continued maintenance and improvements, this house will stand for another 100 years.