Disclaimer: This post is brought to you by Ring. Thanks for supporting the brands that support this blog.

We’ve owned our new home for almost two months now, yet we haven’t spent more than a few hours there since we bought it. Instead, it’s been a hot mess of construction and we’re hopeful that we’ll be able to spend our first night in the house by August. Cross all of your fingers and toes on that one!

It’s weird owning this property and not being there every day. Especially because all of our mail is being sent to the new address, as well as packages of new stuff for the house. I hate that packages are just sitting on the front porch waiting for me to bring them inside. Luckily, we just installed a Ring doorbell and it has been a life-changer. LIFE-CHANGER! I installed this bad boy in five minutes and I can now monitor everything that’s happening on my front porch with my phone. I can see when my contractor visits the house, I can check out when new mail is delivered, and I can keep an eye on packages sitting on my front porch until I have the time to pop over to the house. It’s a dream and it’s cut back on a lot of back and forth between my mom’s place and the new house. I could go on and on, but let me rewind and tell you a bit about finding and installing my new Ring doorbell. 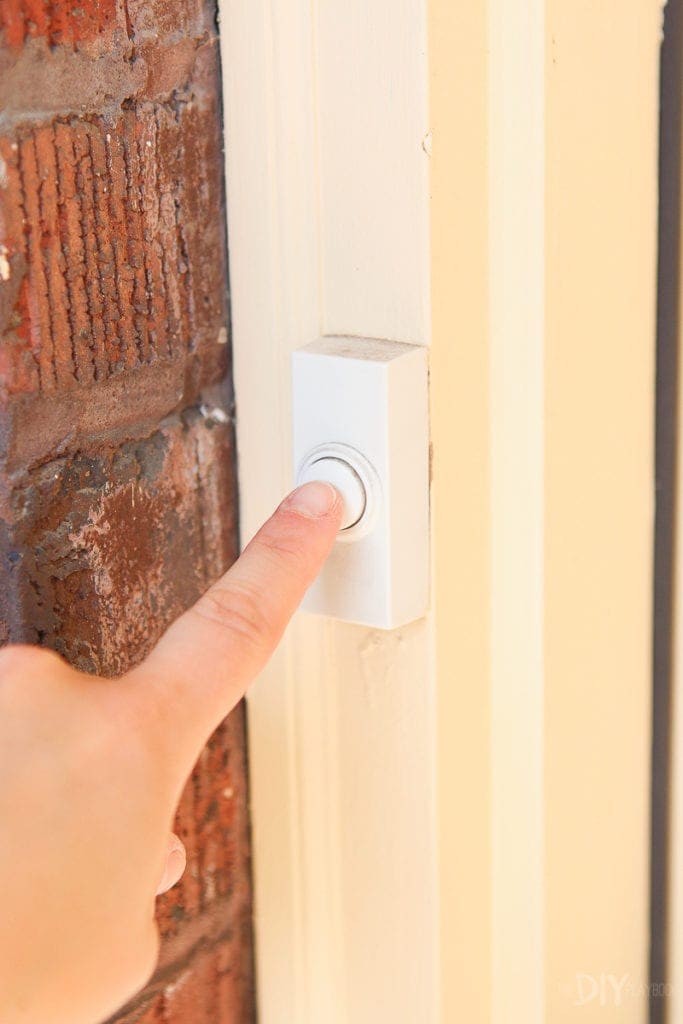 I feel like just about everything in the house is broken. The first week of owning the home, I was there waiting for the HVAC serviceman to come and I was hanging around in the kitchen. He finally called me and said he had been ringing the doorbell for five minutes and no one was answering. I quickly realized that our doorbell was dead. Ugh. Add it to the list of things to repair.

The Beginning of a Smart House 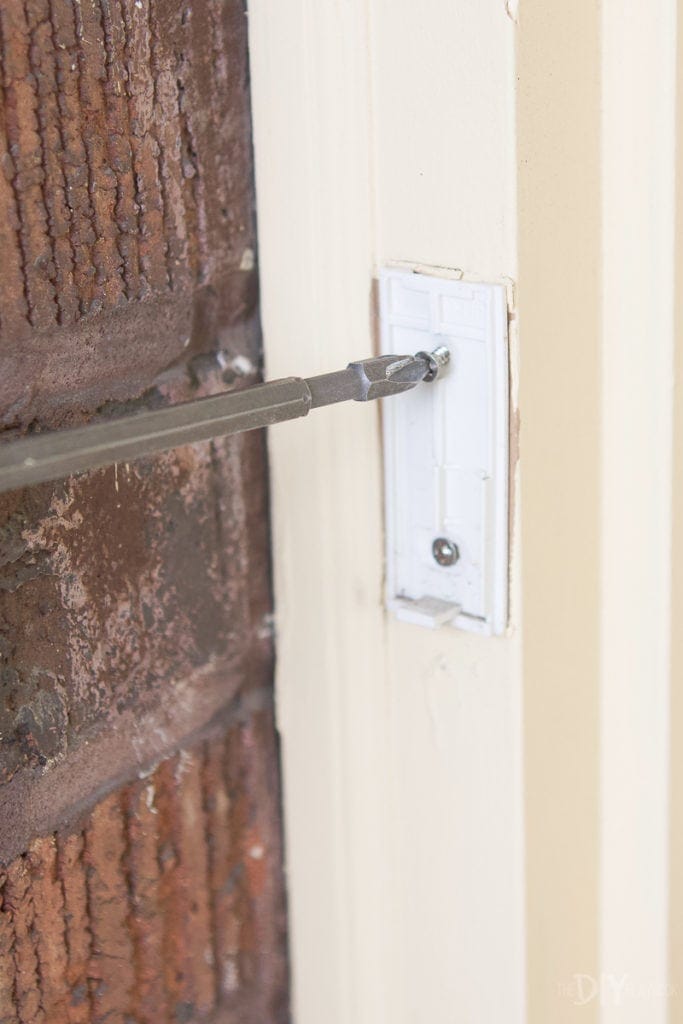 I took a look at the old doorbell and realized it was battery operated and not hardwired in. I figured this out simply by taking the old one off and unscrewing the base plate. The top portion had a battery in it and there were no wires behind. I could have just replaced the battery, but Finn and I are trying to make our new house as smart as possible. So, we immediately knew that we wanted to install a Ring doorbell. I took a look at the options on their website and found that the Ring Video Doorbell 2 was the best one for us because it didn’t need to be hardwired in. It arrived in a couple of days and I was eager to FINALLY have a working doorbell!

How to Install the Ring Doorbell The Ring doorbell comes with detailed instructions and this video also explains everything clearly! First up? Charging the battery. 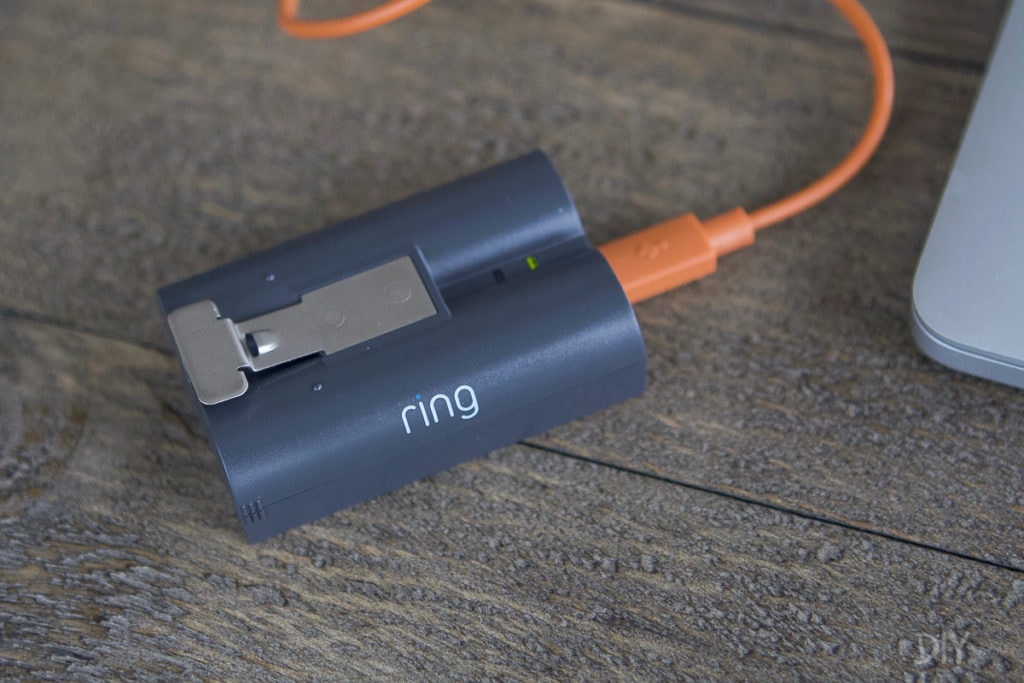 Even though I was eager to get my new doorbell up and running, I took one night to fully charge the doorbell’s battery. It comes with the cord you need and I fully charged it until the LED light went green. The doorbell connects to your home wifi and luckily we already had our internet set up at the new house. My contractor suggested we get that done before he closed up the walls and floors. That way it would be easier to hide the cords. So even though we’re not living there, we have amazing wifi!

I downloaded the Ring app and followed the directions on my phone to connect the doorbell to my home internet. Once that was all connected, it was time to physically install it to the wall. They suggest installing the Ring doorbell about four feet from the ground or around chest height. I knew there wouldn’t be enough room on the wood door frame for the new doorbell, so I decided to place it on the brick. This meant that I would have to use anchors and a hammer drill to install it. The Ring doorbell kit comes with a drill bit for this situation, so that was super helpful!

I placed the Ring doorbell four feet off the ground, used the mini level that comes with the kit, and marked my holes. Then, I drilled four holes and filled them with anchors. You might have to tap the anchors in with a hammer to get them firmly in there. Next, I screwed the doorbell into the four anchors until it was firmly in place.

You can flip the screwdriver over to the other side and it has another bit to tighten the security screws on the base of the doorbell. I put the cover plate on (it comes with both a silver and a black…I went with the black.) and tightened it all into place. 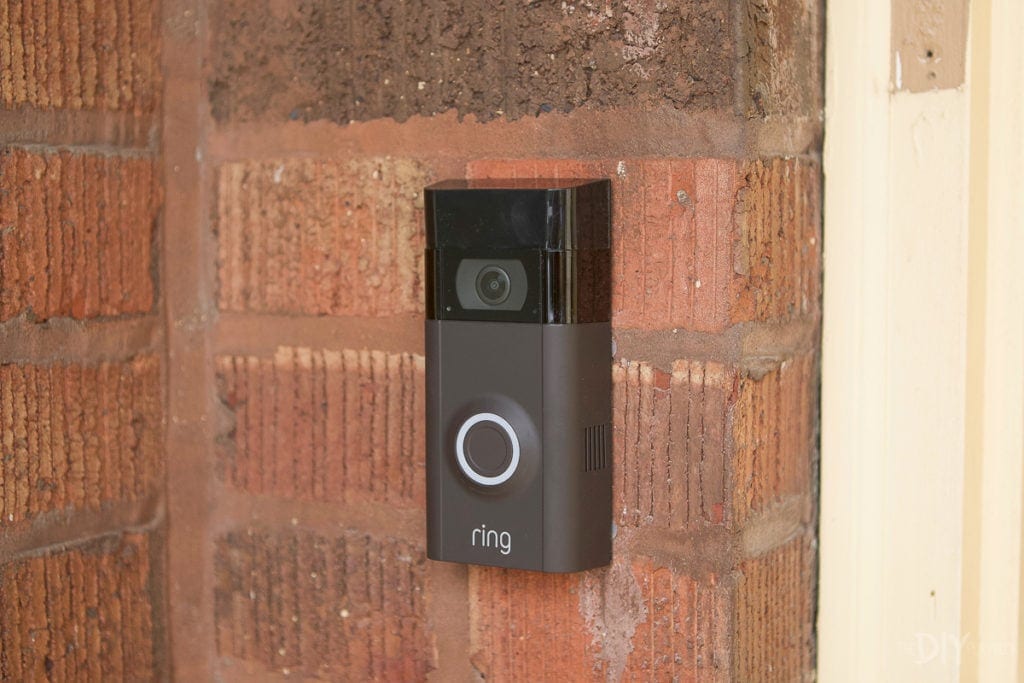 Boom. I was done in less than five minutes. Hell yes! By far, my favorite feature is the fact that I can watch the house from afar…even when I’m just chilling at my mom’s house. We still have a month to go before we move in, but there is a lot of action at the new place. I can keep an eye on the house, my mail, and see when my contractors are coming and going. I set it up so I get a notification on my phone and Apple watch every time someone walks up to the door and when they ring the doorbell. Above is a video of me coming to the door with my hands full of electrical supplies for the house! I also used it the other day to chat with some kids who were on our front porch. They were ringing the doorbell to ask about mowing the lawn (they have a cute little neighborhood service. Young entrepreneurs!) and even though I wasn’t physically at the house, I was able to talk to them and tell them to leave their business card in our mailbox. 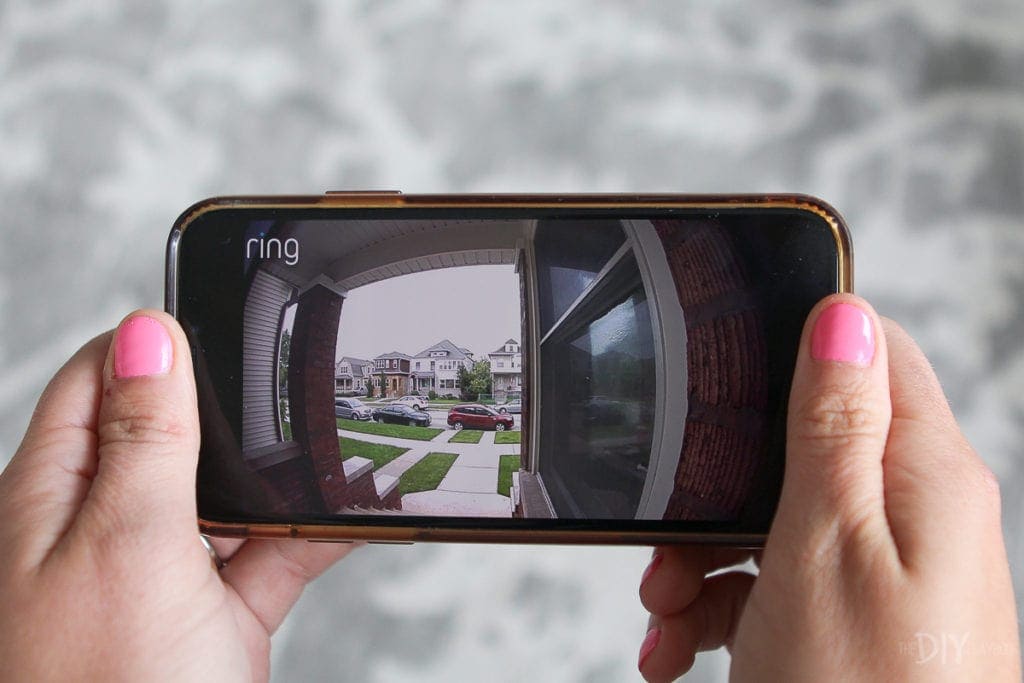 I  have more peace of mind knowing that I’ll get an alert on my phone if something funny is happening at our new house. And to me, that is priceless!

The front porch needs so much TLC (new door, new mailbox, paint, planters, etc.), but at least we have a new doorbell. Here’s a before and after. Not the biggest difference visually…but yay for a working doorbell! 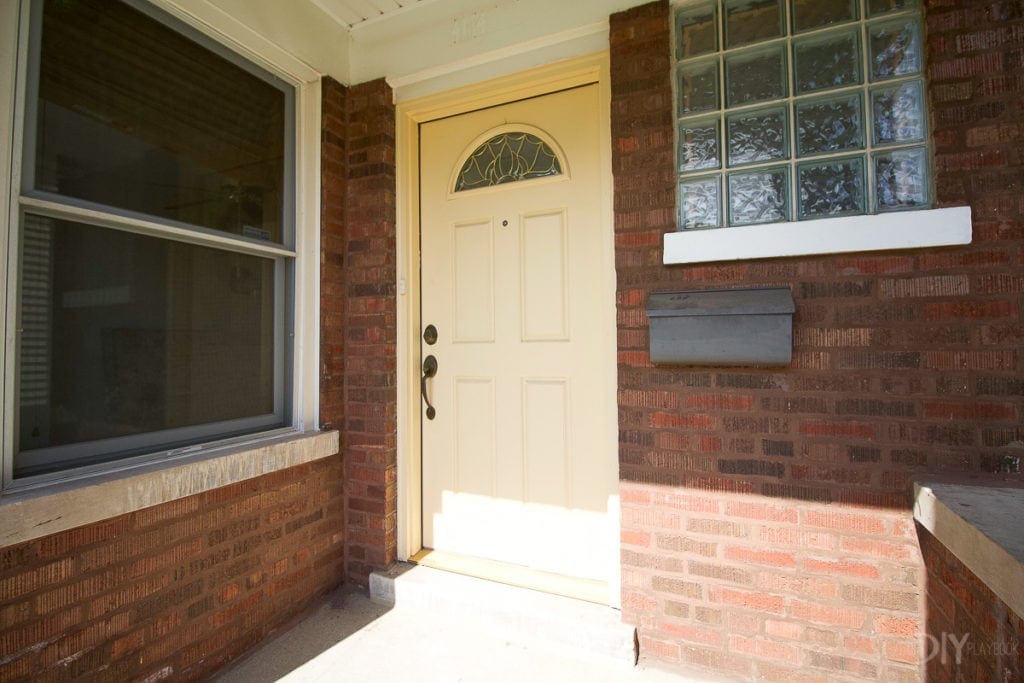 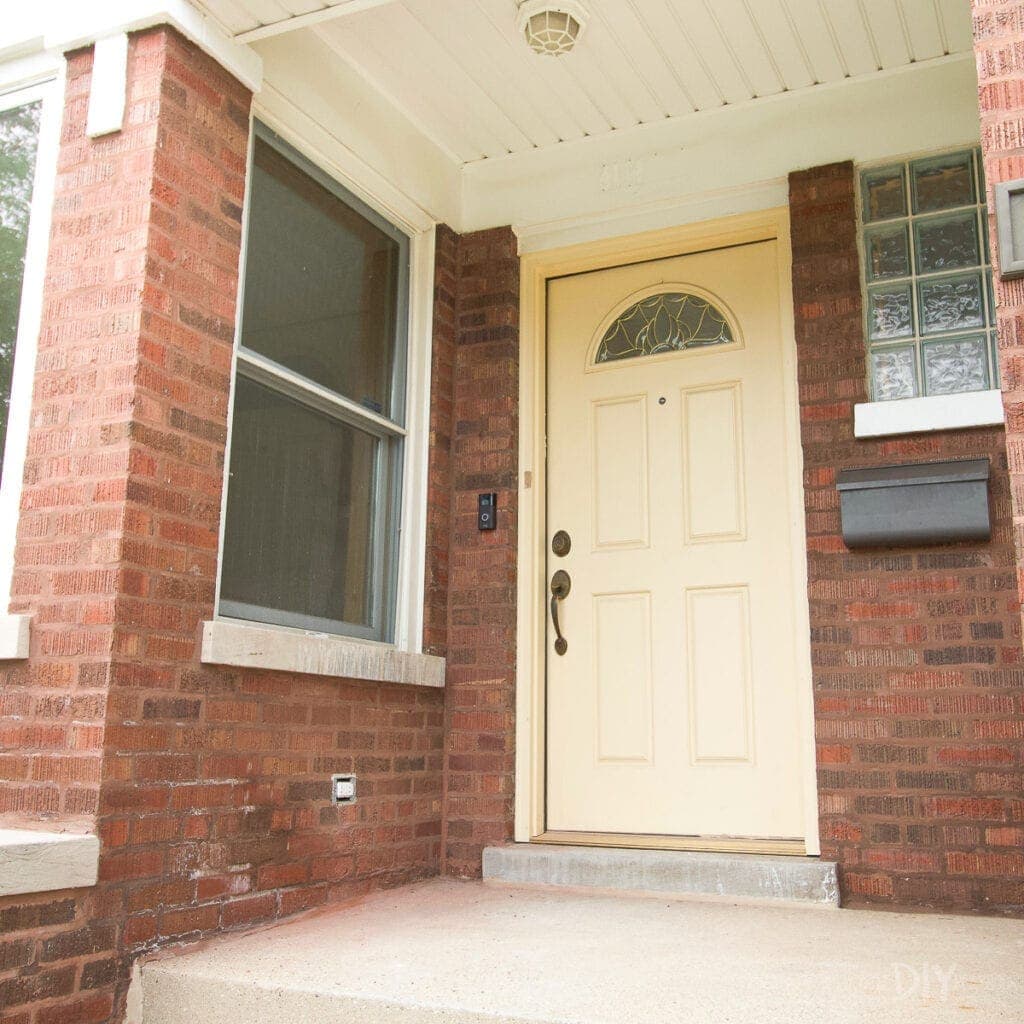 We are doing our best to make our new house as “smart” as possible! We had our contractor wire the house for speakers all over, we are installing smart lighting, and we’re looking into the security cameras from Ring too. It’s a bit overwhelming, but it’s also pretty cool to be able to control so much right from our phones and computers. Stay tuned for more details on how we’re making a smart house…

Do you have a Ring doorbell? If so, give me all the tips on how best to utilize this awesome technology.