Rookie Mistakes: a series of common decor mistakes made by a design and DIY rookie…me! And no, I’m not judging because I have made, and continue to make, these mistakes too!

Here are the top five Rookie Mistake posts from the series. (You can catch the rest of them at the bottom of this post.)

Remember, the Rookie Mistakes series is a NO JUDGEMENT ZONE. I’ve made ALL of these mistakes in my home and  I simply want you to learn from me so you can make your home look amazing. 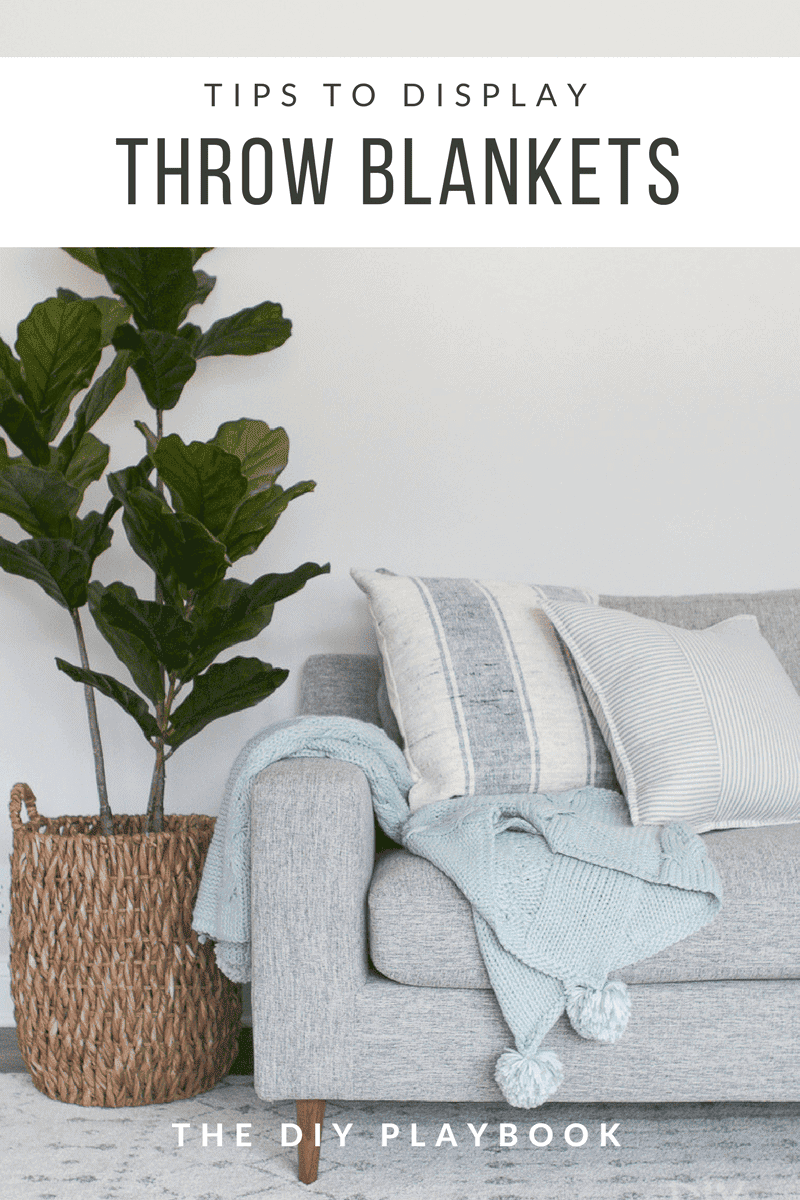 We are big fans of throw blankets. They cozy up a bare couch while adding color, pattern, and texture to the living room space. Plus, they’re essential when you want to snuggle up and get all comfy when lounging in your family room. Yep, throw blankets are a must for just about any couch space.

But, there is one rookie mistake we see over and over again when it comes to throw blankets…

How NOT to Display Throw Blankets

Far too often we see homeowners keeping their napping blankets out for guests to see. But even worse is that we also see them draping the chunky blanket on the back of the couch for easy access. We’re definitely not judging, but we chalk this up as a rookie mistake.

The next option is the “hamburger fold”, where the blanket is folded the short way but once again, draped on the back of the couch.

We don’t encourage either because it can make any couch look outdated and well…. ugly. BUT, the good news is we have a secret weapon to step up the couch style, while still keeping that warm and cozy blanket nearby and today we’re spilling the beans.

Now that you’ve seen some cringe-worthy blanket styling, let’s chat about the ways we prefer to style and use throw blankets in our family rooms… We all have those huge blankets that are sooooo comfortable. You know the ones we’re talking about. The blanket that you and your significant other fight over when it’s chilly, and the one you wrap yourself up in when you’re feeling sick. It may not be the prettiest blanket around (and it’s usually oversized) but it’s oh-so-cozy.

We both have those blankets in our homes and we use them every single day, but you don’t see them when you look at our family rooms. Instead, they’re hidden in plain sight!

See that basket on the end of Casey’s couch? It’s full of cozy (not so cute) blankets! Every night Casey & Finn get out their designated blankets when they hang on the couch (always fighting over this one…) and they get warm and snuggly. Then, when it’s time for bed, into the basket those blankets go!

This basket is from HomeGoods and it was such a good find.  Love that it has a top because you can’t see the slew of blankets thrown haphazardly inside. Although Finn thinks the basket should belong to a snake charmer…but hell, I like it!

We used this basket from Serena & Lily for the family room makeover we completed. It too holds lots of blankets!

Baskets without a lid are also an option (the one above is old from Article). Although you’ll have to be a bit more aware of the blankets you put inside.Ideally, it should still work with your home decor and the style of the room.

Now, let’s chat about the throw blankets that you want to display on your couch because they’re that pretty. Here’s how we usually display those ones… While Bridget has been playing around with this neutral patterned throw on her new couch. These throw blankets add texture, pattern, and color to our gray couches. Plus, they’re nice to quickly grab when you want to warm up. Although they’re not nearly as comfortable as the throw blankets we hide in baskets. Casey: Bridget is the queen of doing the effortless blanket drape on her couch. I’m always way too intimidated to try out that look because it often gets bunchy or messy on my couch. But somehow she can toss the blanket on the back of her couch and it looks chic and effortless. How does she do it?!

Bridget: Thanks Case, you’re far too kind and I promise I’m not nearly as talented as you’re making me sound. The key here is using a thin, somewhat petite blanket. This is not going to work well with a bulky or large blanket.

Then all I do is spread it out up the back of the couch and drape it down into the seat of the couch. I let it sit pretty naturally and then play around with the areas that look a bit bulky by spreading them out. If there is a part that’s still not working well, usually I can hide that under the pillows I set on top of the draped throw. I swear, it’s way easier than it even sounds! And our little secret — I usually use this styling method on areas of the couch that are a bit slouchy. This is a great way to hide any imperfections! For more tips on hiding an imperfect couch, check out this blog post.

So there you have it, the multiple ways to combat one of our biggest pet peeves in the family room! We are all about being cozy in our homes (hello,  Netflix bingefests), but there are ways to be comfy without compromising the look of your family room.

Hopefully, we can all say no to the hot dog fold on the back of the couch…

And enlist the help with a new basket and some throw styling to step up our couch game once and for all. What do you say?!

Catch up on More Rookie Mistakes