It’s been four months since we moved-in and I’m happy to report, we finally have a couch! I don’t think anyone is more excited about this new development than Matt, but I’m a close runner-up. Today I’m breaking down what took so long, why we chose this couch, and what exactly I love about it.

Of course, we were eager to buy a couch ASAP but we had a few roadblocks that prevented us from making the plunge right away. 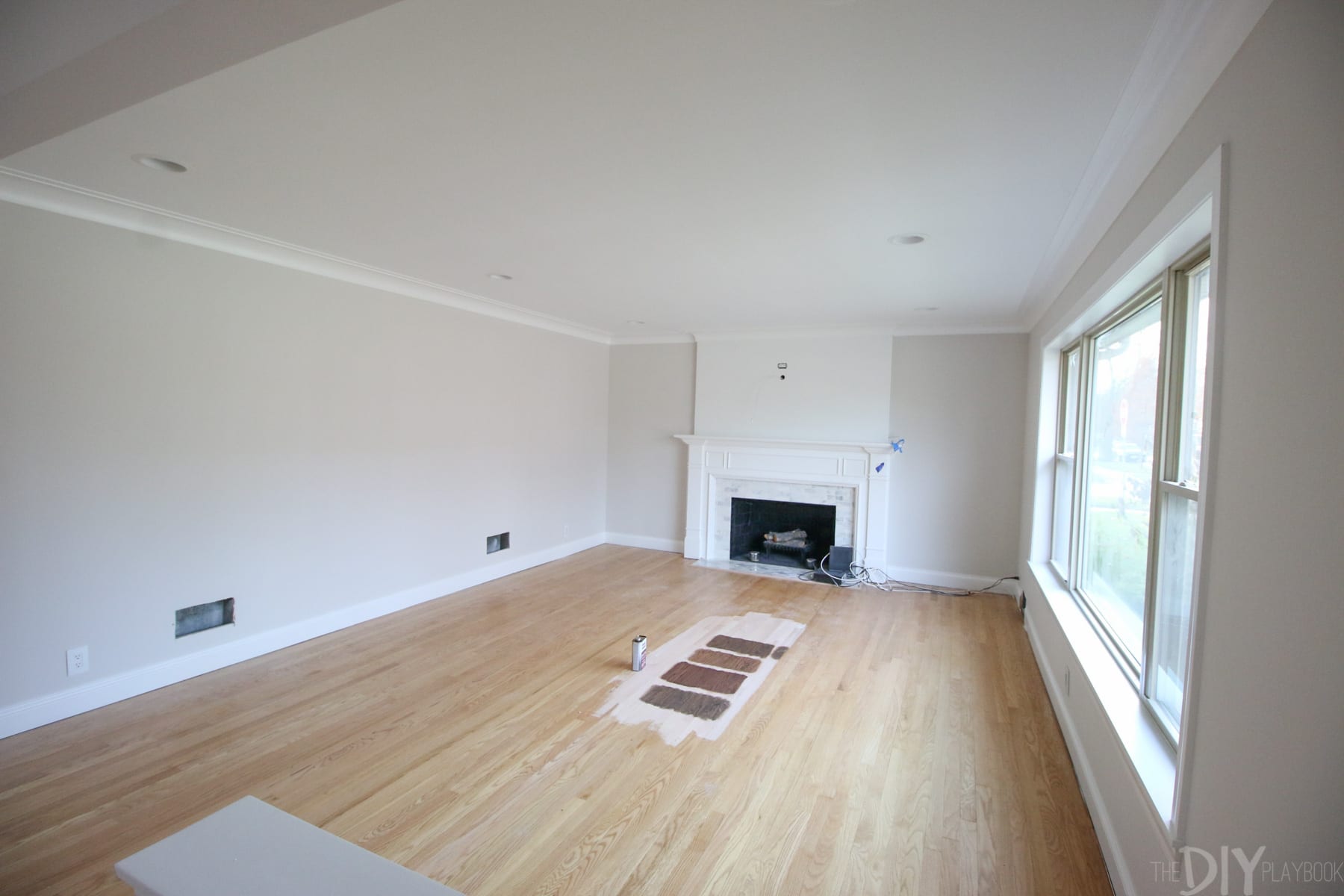 Ultimately the Sloan Sofa from one of our favorite furniture stores here in Chicago, Interior Define, was the winner! Interior Define has lots of stylish pieces but what really sold me was the ability to customize the size, fabric, and legs. 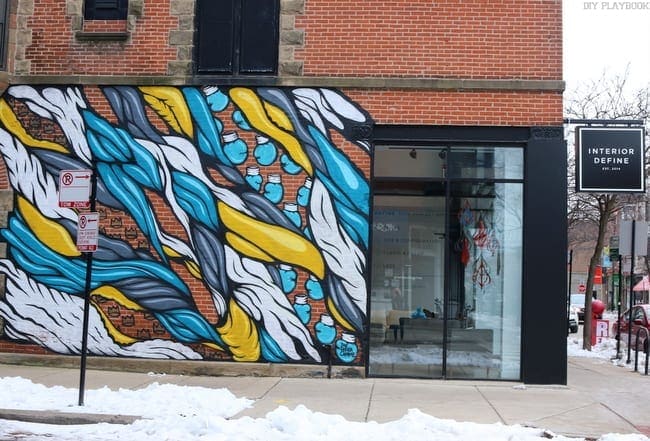 Matt and I visited their storefront in November and together chose the type of couch (comfort was our first priority), the exact fabric (this one is kid-friendly) and the legs (sleek and modern). 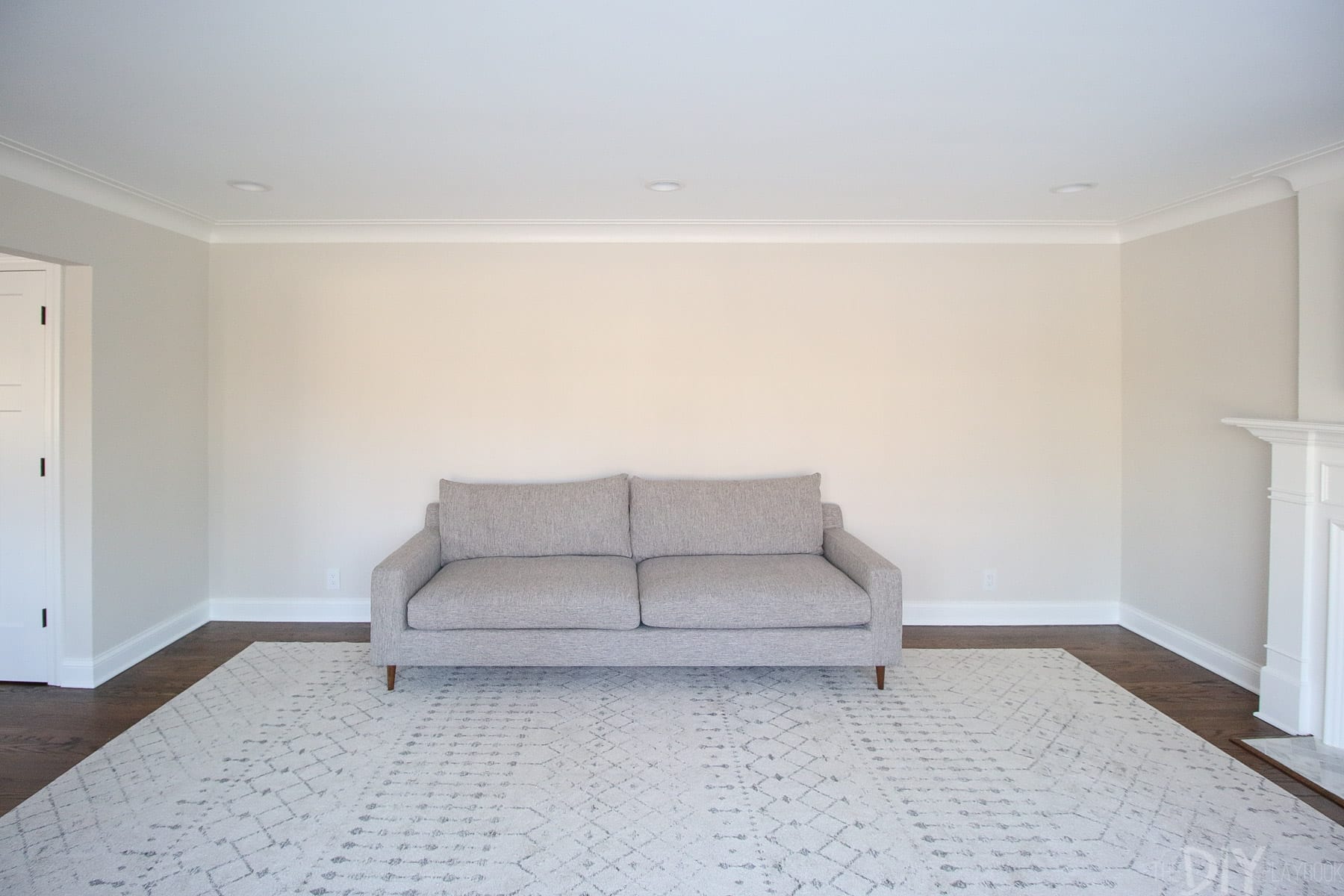 Another priority that I learned after buying our first couch was that I wanted cushions that were reversible and could fit in any area of the couch. Our old couch didn’t have cushions that could move around so the areas we sat in the most became the most slouchy and worn looking.

My mom’s couch has cushions that could easily rotate and she makes a point to rotate them each month. Her couch is almost ten years old yet doesn’t look slouchy at all because of this trick. This couch design is like my moms, it allows me to rotate the pillows back to front and from one area of the couch to another. 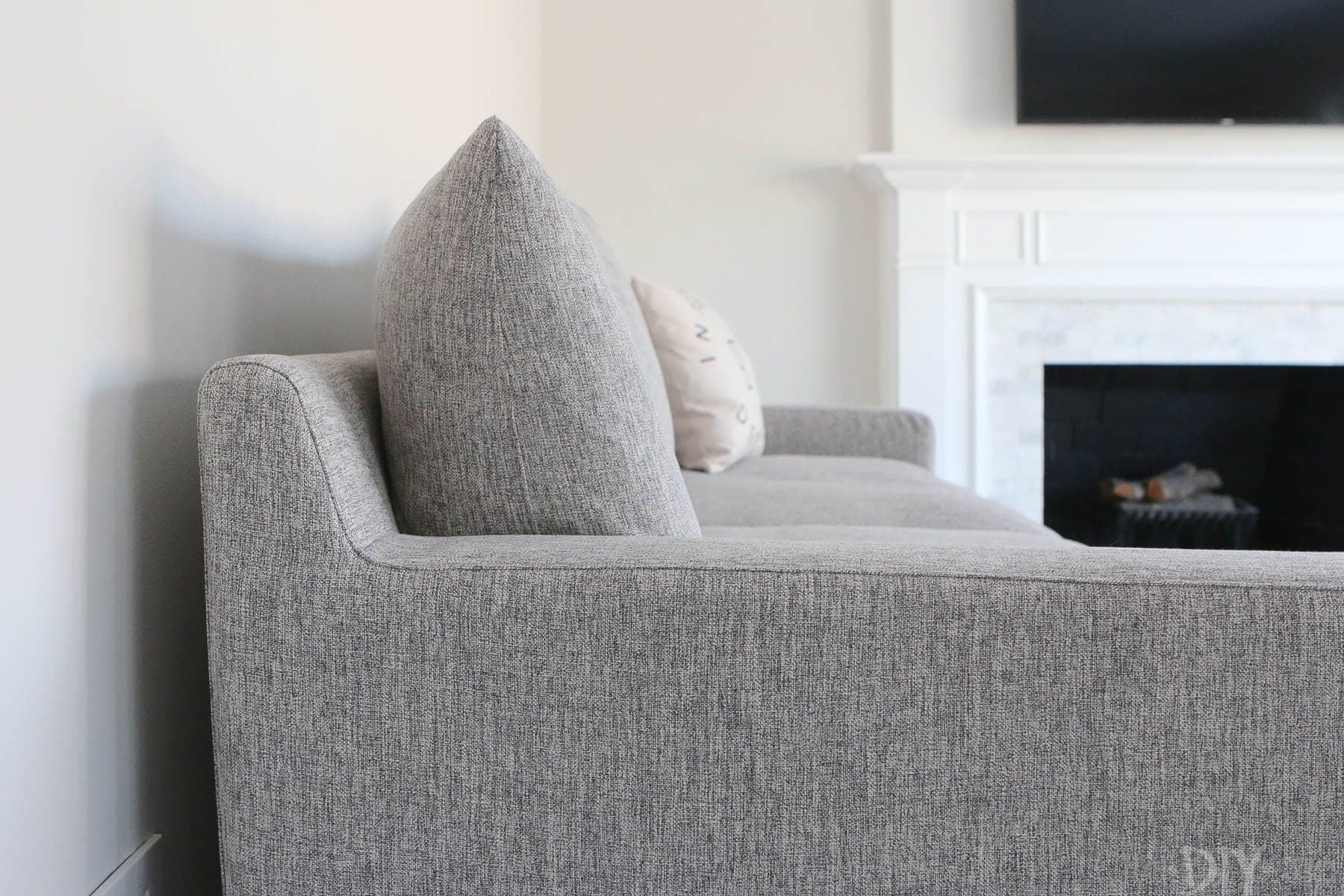 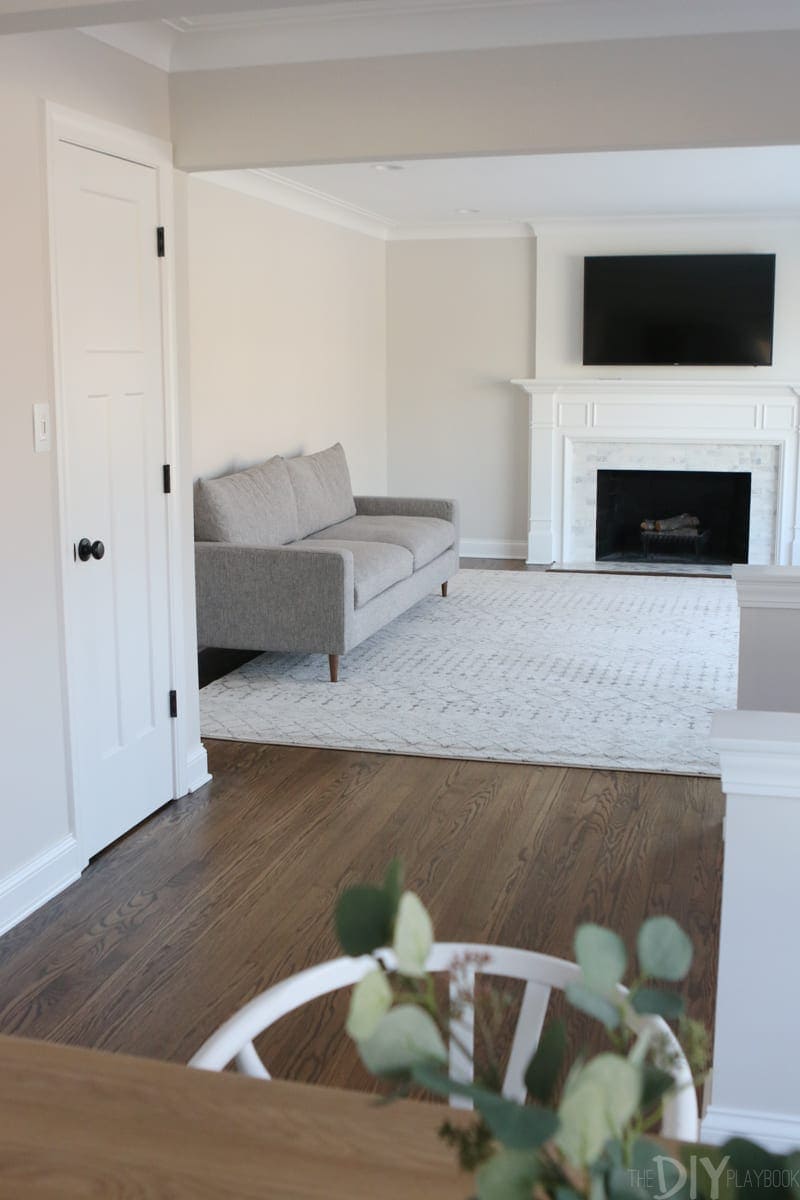 The couches at Interior Define come in a set size but can be ordered in 4-inch increments larger than that original size. I haven’t ever heard of another company that offers this option without a crazy expensive price tag. We ended up going with a 100-inch couch, which works pretty perfectly on this extra long wall.

Matt and I were also able to customize the fabric for the new extra long couch and chose their “cross weave” fabric. They had TONS of options and we focused on their kid and pet-friendly ones since Baby Mac is almost here. They also have an option to “stain proof” the cushions during production, which makes them repellent to spills… we were all over that! I hope I never actually have to test this feature but I have a feeling that spills are inevitable so I was happy with the extra protection. 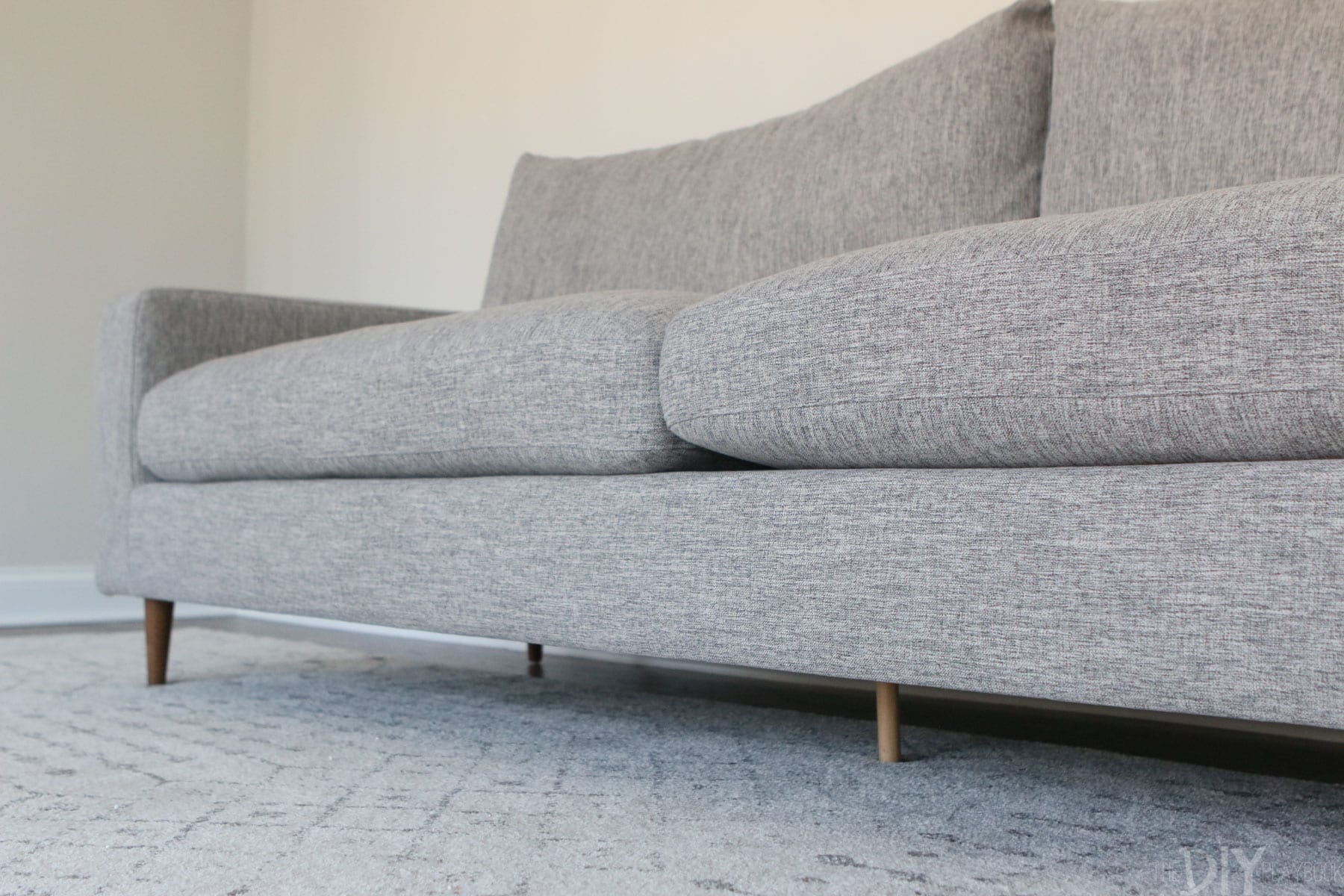 I thought about stepping outside my comfort zone and adding a pop of color to this couch, especially since we’ve only had gray couches around here. As a blogger, I don’t want to continue to do the same thing over and over, but I also want to do what I love and not just make a decision for the sake of being “trendy”. 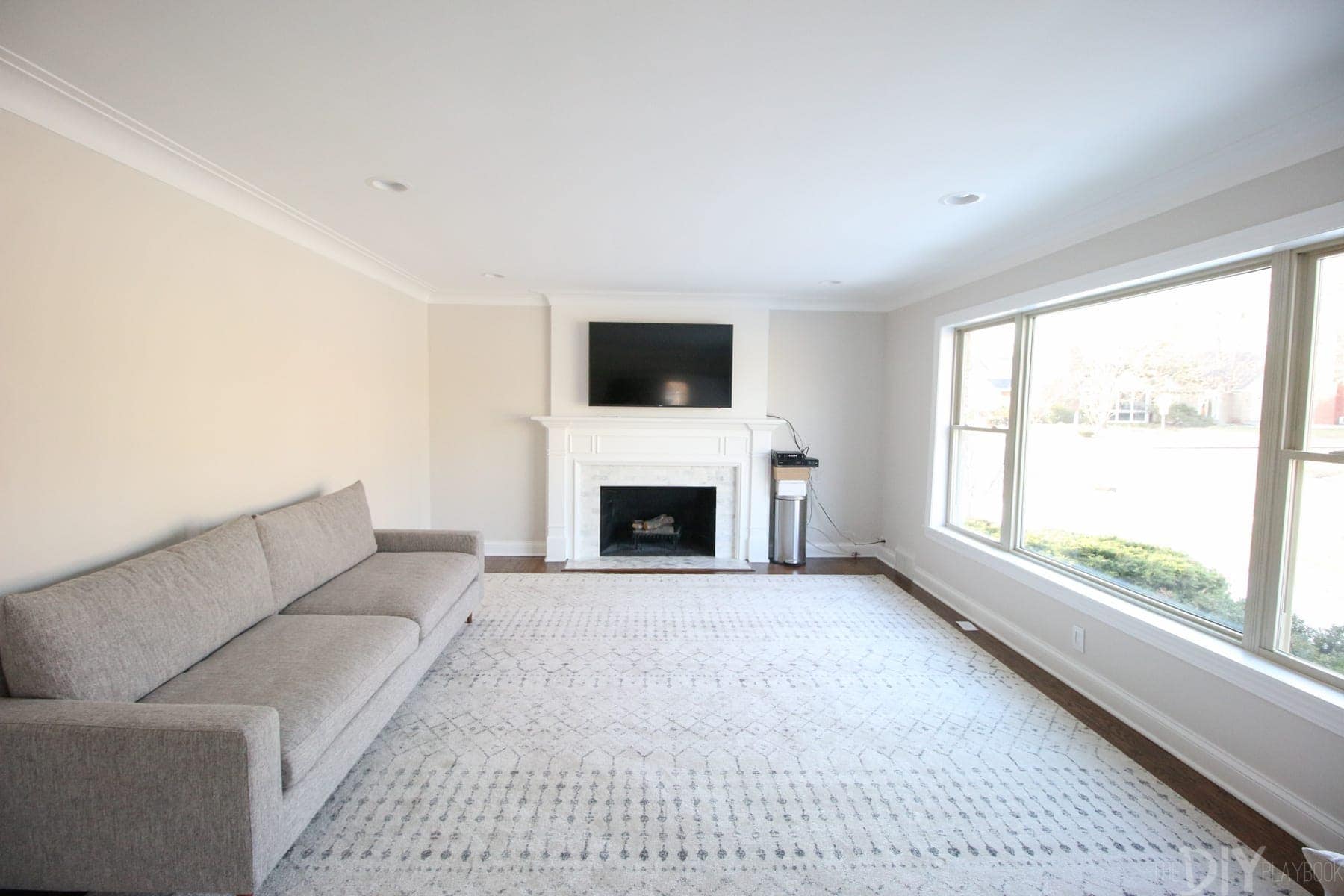 I love the idea of trying something new, but I also realized that this couch could be around for 10+ years. I wanted something classic and something that would have the ability to evolve with my style, or as we decorated for different seasons. That’s why I went with the color “seed” in their cross weave fabric. The legs are oiled walnut in a tapered round wood and I’m obsessed with their classic shape.

We almost went with a light gray velvet, which I was obsessed with. But the lines of velvet when you run your hand on it would have driven me legit crazy, I know it. So this “safe bet” gray is what we ended up deciding on. It’s Classic. It’s Versatile. Some may say it’s boring and overdone around here… I don’t disagree. But I do hope it’s a color I won’t have design regret over ever! I hope you guys understand and also note that I’m doing a lot of things differently in this house… but not everything.

We’re lucky to have an Interior Define storefront here in Chicago so we could go in and sit on all of the furniture and see all the samples in person. However, Interior Define is actually based online so anyone can buy an ID couch and get it delivered right to your living room… with white glove service. 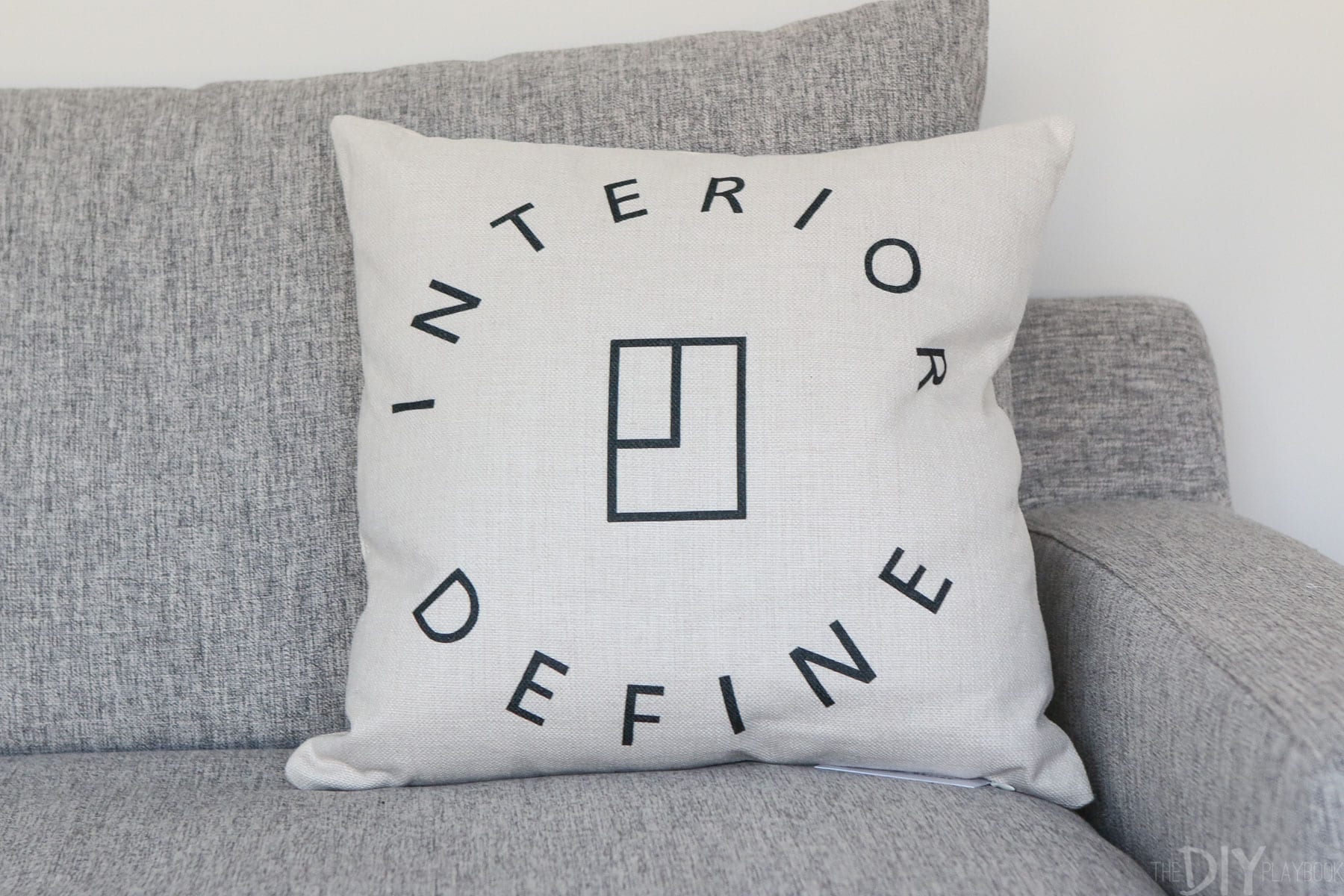 Before we ventured downtown to test drive which couch we wanted to buy, I scoured the internet for reviews of other styles. Casey has this same style (in a sectional) so I already knew I loved the comfort of hers. But I also didn’t want to totally copy hers so I was open to other styles. If you’re looking to buy an ID couch, here’s what we found when testing them. 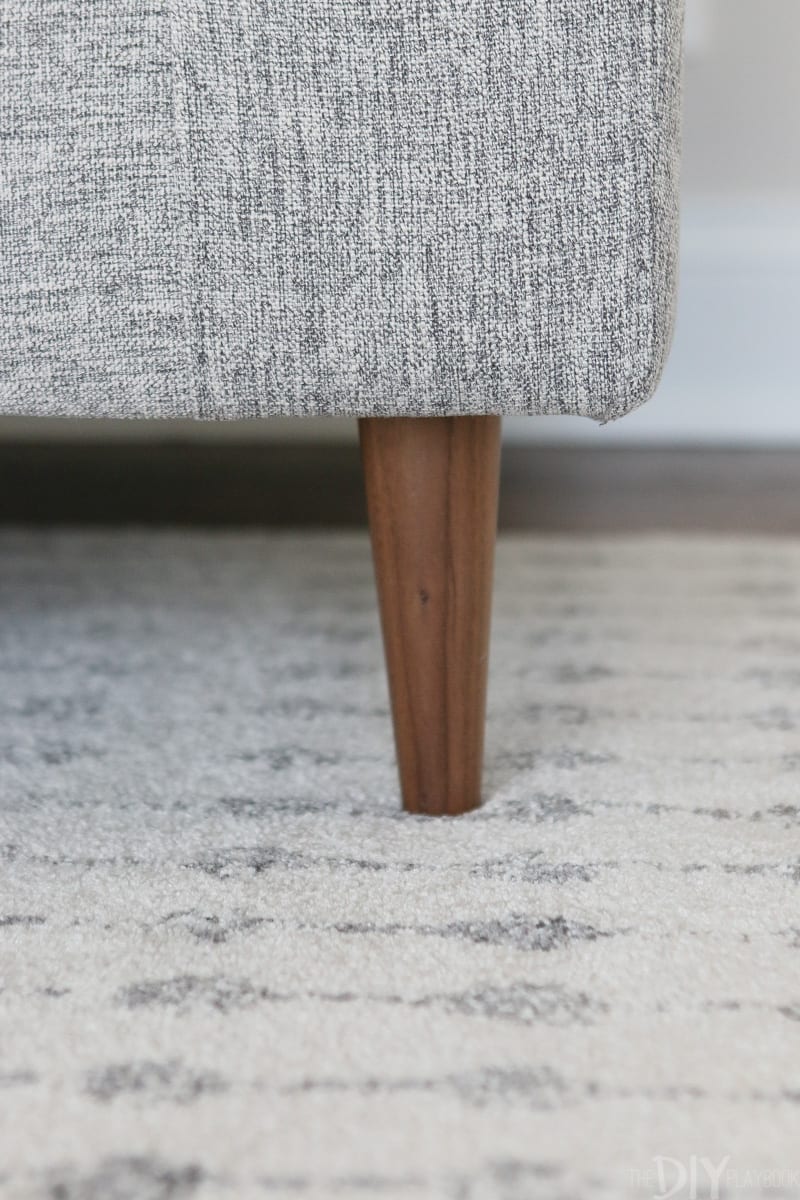 I really loved the Caitlin Sofa but it was a tad more “formal feeling” when I sat in it. If we were furnishing a living room instead of our family room that we will be watching TV/lounging in, I would definitely buy the Caitlin. I love the shape! 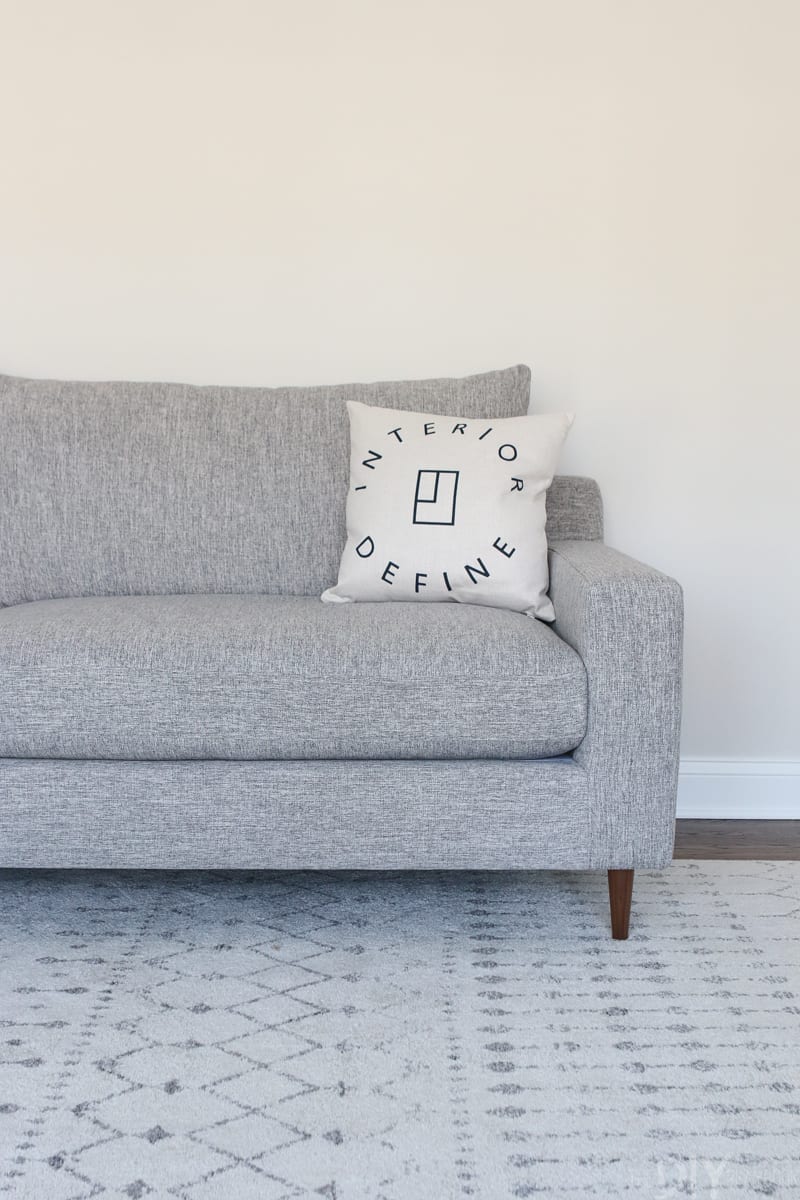 The Charly Sofa is gorgeous, but it is very deep. I really wanted to get this one before visiting the store but when we sat in it, neither of our feet were even close to touching the floor. However, if you love this feel (perfect for naps and serious lounging!), the Charly may be perfect for you!

We’ve been waiting for the couch to be delivered before moving forward with any other pieces of decor or furniture. Now that we have an idea of the size and look, here’s what is next on our shopping list: 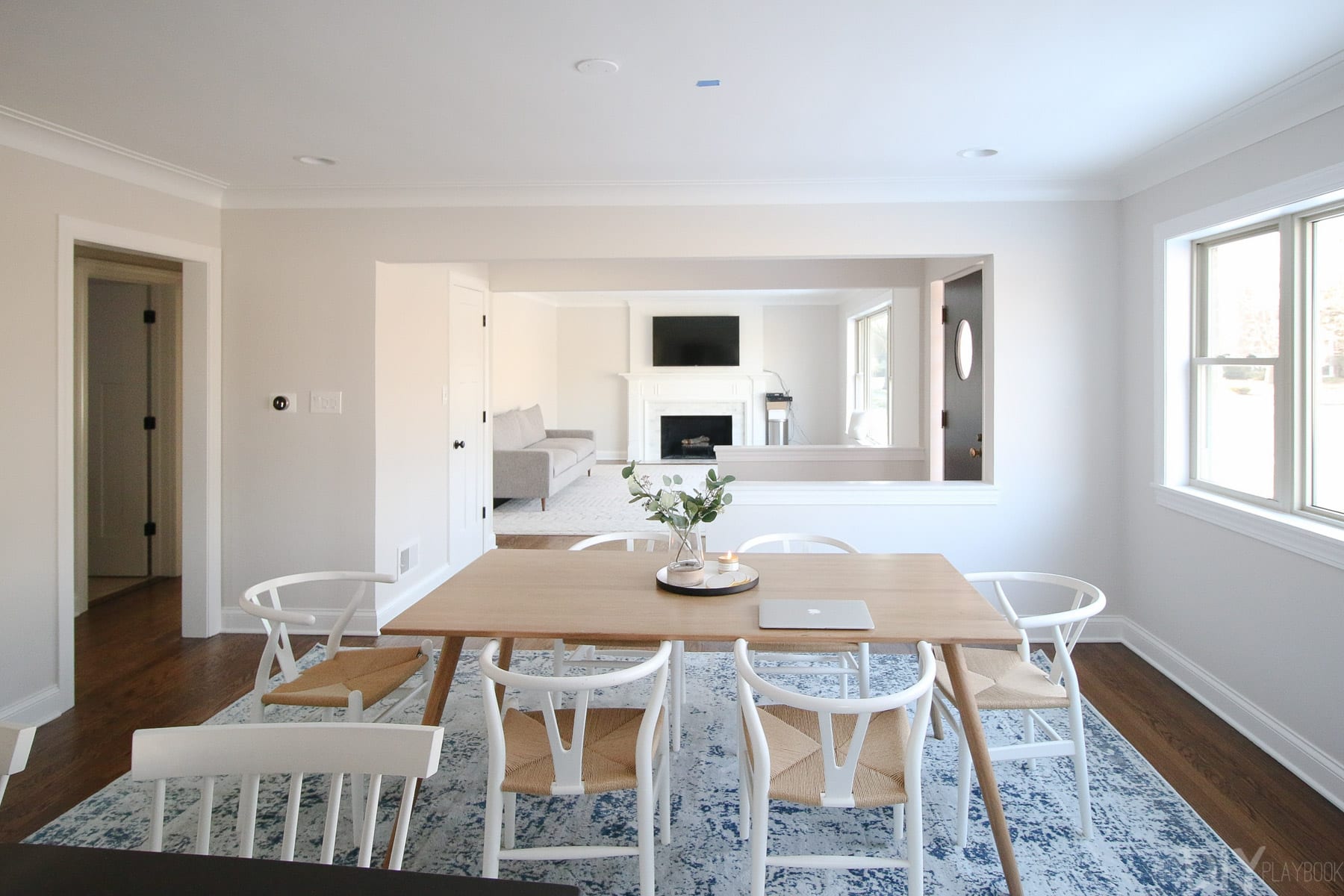 The living room is only about 20% done but man, I’m loving the progress so far. AND there are so many exciting decisions ahead. I’ll keep you posted!