How to Arrange Pillows on a King-Sized Bed

We’ve had our new California king bed in our room for about a month now and all I can say is, “What took us so long?!” Having so much room is heavenly. I truly feel like I’m in a hotel in that big bed and Finn and I each have soooo much space! You guys were right, upgrading to a bigger bed is pretty life-changing! Because we upgraded to a new bed, we needed all new bigger bedding. Plus, I had to figure out how the heck to arrange pillows on a king-sized bed. I’ve only ever had a queen, so I was at a loss as to how many pillows to use. Did I need Euro shams? Did I just need king shams? How many decorative pillows should I display? I played around with lots of different pillow combinations in our room and here’s what I came up with…

First, I started with two king-sized pillows on the bed. I ended up getting these pillows (king-sized, medium density) and I have the pillowcases from this sheet set covering them. It didn’t even occur to me that we would need to get bigger pillows with our bigger bed! But it looks so much better with those larger pillows filling up the entire space. Standard pillows work for a queen, but you need to go with king pillows for a king/California king. Next, I have three Euro-sized pillows in this sham. I wanted to bring in texture since we might not have our waffle blanket on the bed year-round. Before, I only had two Euro pillows on our queen bed. If you have a king bed, you’ll want to go with three Euro pillows. 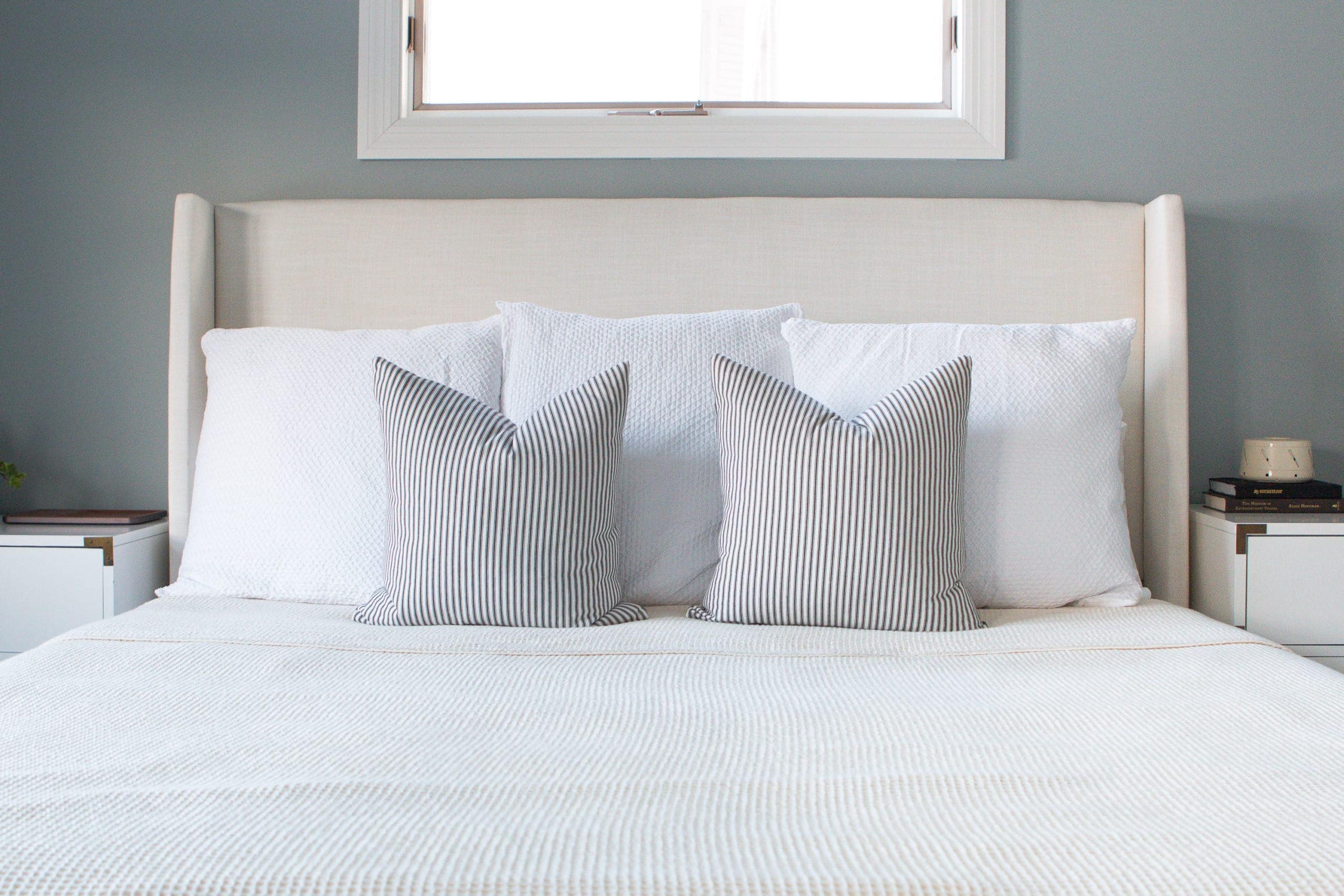 In front of that, I used the same pillows I had on our old bed, which are two striped decorative pillows from Tonic Living. These are 20×20 and I probably could have even gone up to 22×22. I love the subtle stripe on these and I’ve had them for years! Finally, this room needed a bit of color so I added a colorful lumbar pillow. I had this one custom-made locally and it’s 14×28. I probably could have even gone a tad bit bigger for this pillow since the bed is so big! I’ve always been a fan of the large Euro pillows because I like that they add some height and hide the sleeping pillows. That’s kinda always been my go-to look when making beds.

Other Ways to Arrange Pillows on a King-Sized Bed

I feel like there are no right or wrong ways to make a bed, so I hate to throw any “rules” out there. Instead, let’s look at other inspiration for styling pillows on a king-sized bed. Photo by Sara Ligorria-Tramp for Style by Emily Henderson

In the above photo from Emily Henderson, they just have four sleeping pillows and one long lumbar pillow in front. This looks simple, minimal, and effortless. This look from Studio McGee is another stunner. They have four sleeping pillows that lay flat on the bed, then two Euro shams, a decorative pillow, and a lumbar pillow.

In the end, I think it all comes down to personal preference when it comes to arranging pillows. But do buy the correct size sleeping pillows for your bed (standard for a queen, king size for a king), because that will make a big difference!

The Scoop on Our Bedding We also had to get all new larger bedding to fit the bigger mattress. Most of the pieces are from Boll & Branch and I’m very impressed with the quality. They’re definitely not cheap, but I do think nice bedding is a good place to splurge since you spend so many hours of your day in bed. I’d much rather spend money on a nice set of sheets, rather than a new pair of shoes, but that’s just me! I have this white sheet set on the bottom and then I add this cream bed blanket and fold it down. Finally, I add this white duvet, with this insert, to the bottom. My sister always likes to lay out the duvet cover and then fold it back and it always reminds me of a hotel. I decided to try that here and I’m now a convert to her method! It just looks so fluffy and inviting folded down like that. I used to always add a throw or quilt at the end of the bed, but I’m liking this look even more! 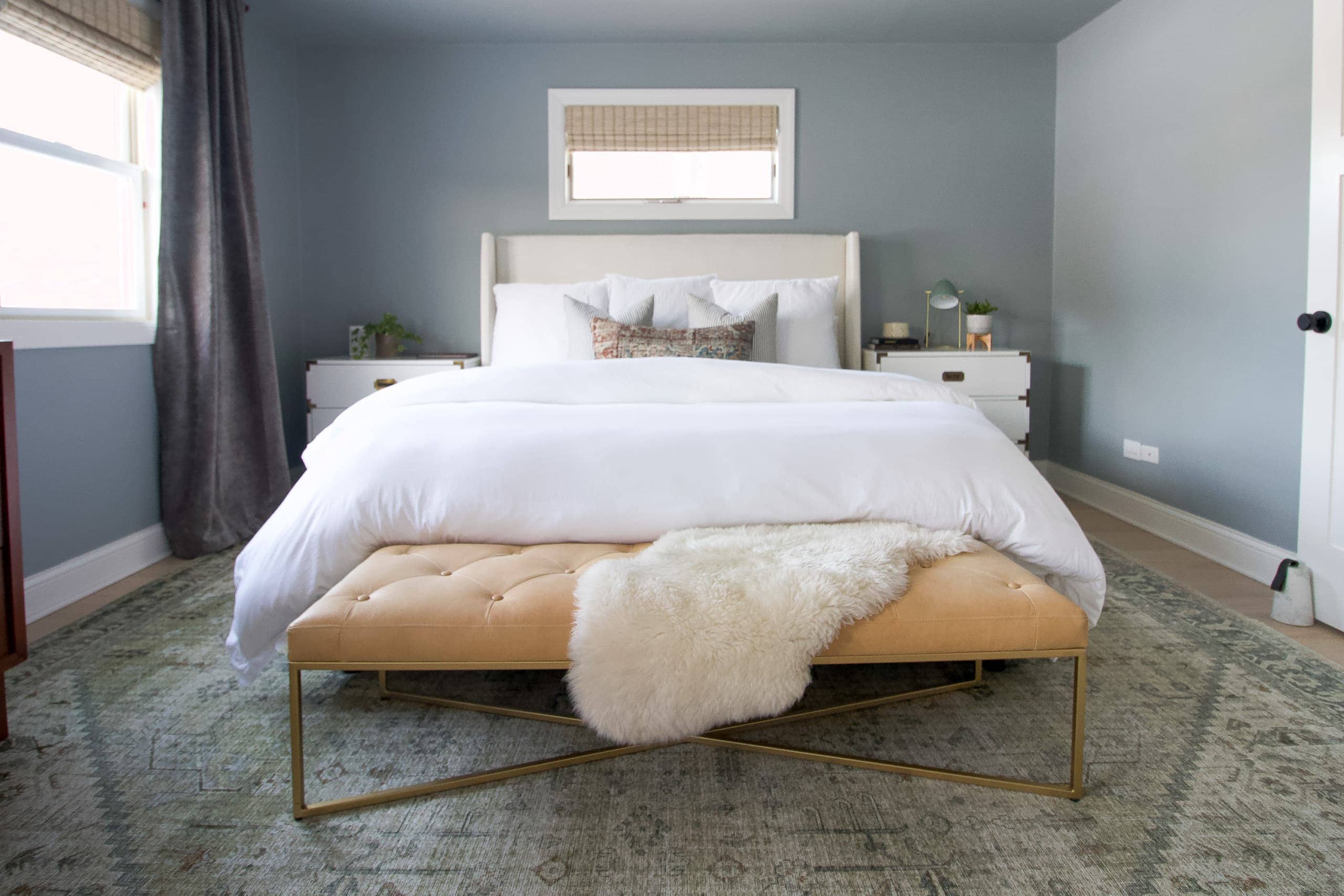 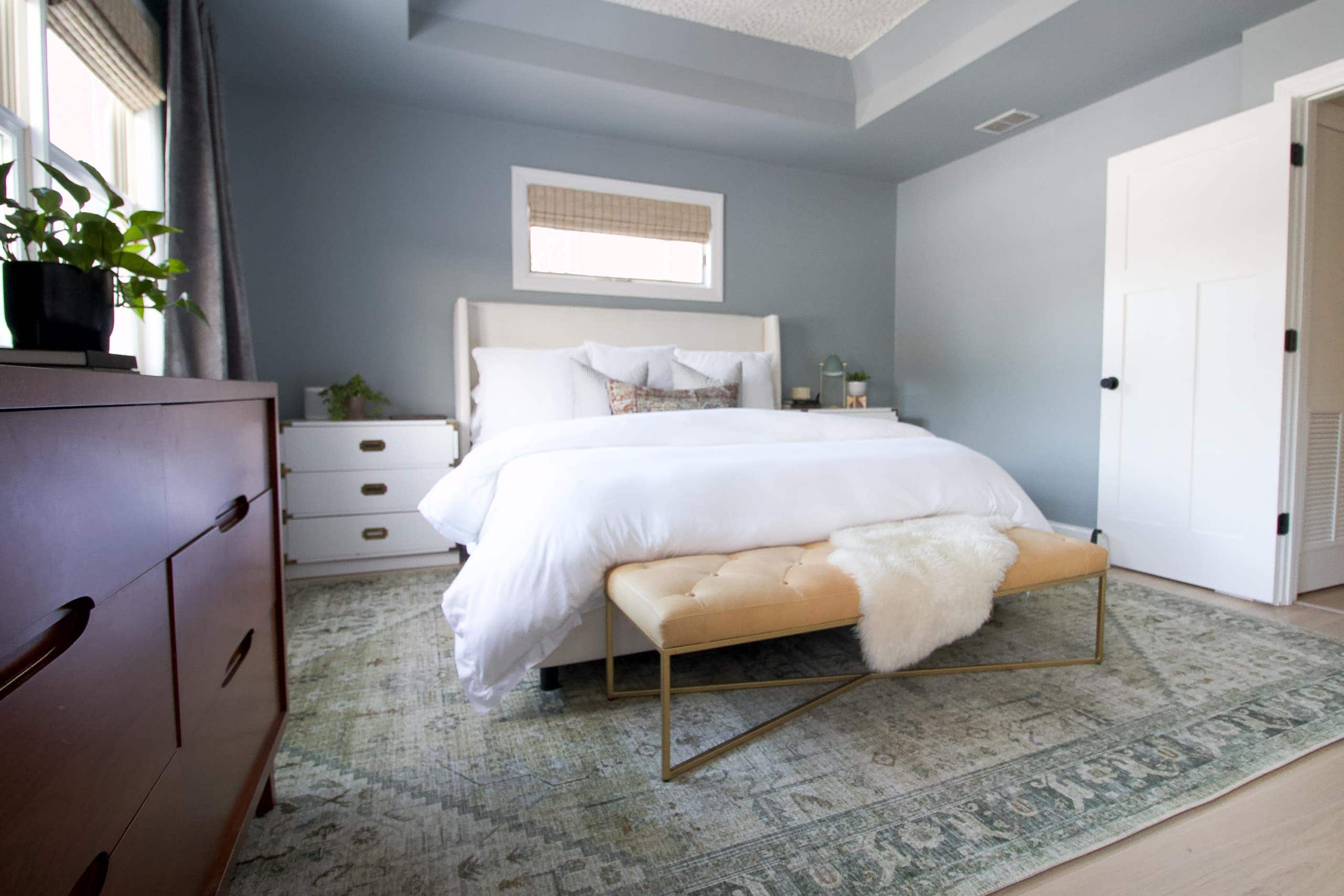 The sconces finally arrived, so I have an electrician coming out to install those over the nightstands. It will be a few weeks until the new nightstands arrive, so I’ll just have to mark the wall to figure out the best placement for the sconces without the new furniture in place.

It’s also finally time to mount our Frame TV over on that far wall. Oh, and I found a new dresser from Restoration Hardware outlet. More details on that coming to the blog soon.

Catch Up on the Main Bedroom Makeover