How to Install a Flag Pole Into Brick

I’ve slowly been boosting our home’s curb appeal. It started with new landscaping, followed by a DIY window box build, and finally removing the peeling paint on the front of the house. But even with the fresh paint and healthy plants, there was still one more task left to do…install a flag pole!

How to Install a Flag Pole Into Brick Lots of the homes in our neighborhood fly American flags (or Chicago flags or rainbow flags!) and I think it’s a really neat way to add some character to the exterior of your home. This is our first time with a real “house”, so adding this patriotic accessory to the front of our home just felt like the homeowner thing to do! Really, installing a flag pole is just about attaching the bracket with a few screws, which isn’t hard at all. However, because I was attaching mine to our home’s exterior red brick, I needed to make the right choices so this bracket wouldn’t go anywhere. Brick just makes things a tad trickier. Here’s how to install a flag pole into brick.

If you’re drilling into brick, you need to have the correct supplies. I ended up buying a drill bit specifically for brick along with concrete screws. These are a must! The bracket came with its own hardware, but that wouldn’t have worked well for our situation because it was designed to be installed in wood so I just tossed it. I ended up getting these concrete screws and a masonry drill bit to get the job done. You’ll want to make sure you buy screws that fit through the holes of your bracket and make sure the drill bit is a tad smaller than the screws. So I would recommend getting the bracket first before buying your screws. That way your screws aren’t too thick to go through the holes of the bracket. My drill actually has a hammer setting. This is the best setting to use when drilling into brick. You could also use a hammer drill (it’s super powerful and will glide right into brick), but I don’t own one. Instead, the hammer drill setting, the highest torque, and a little muscle ended up working for me.

The pilot holes will make it a lot easier for your concrete screws to penetrate the brick. I always like to use a piece of painter’s tape to mark the depth of the screw. That way, I don’t drill in too far and end up with a loose screw. 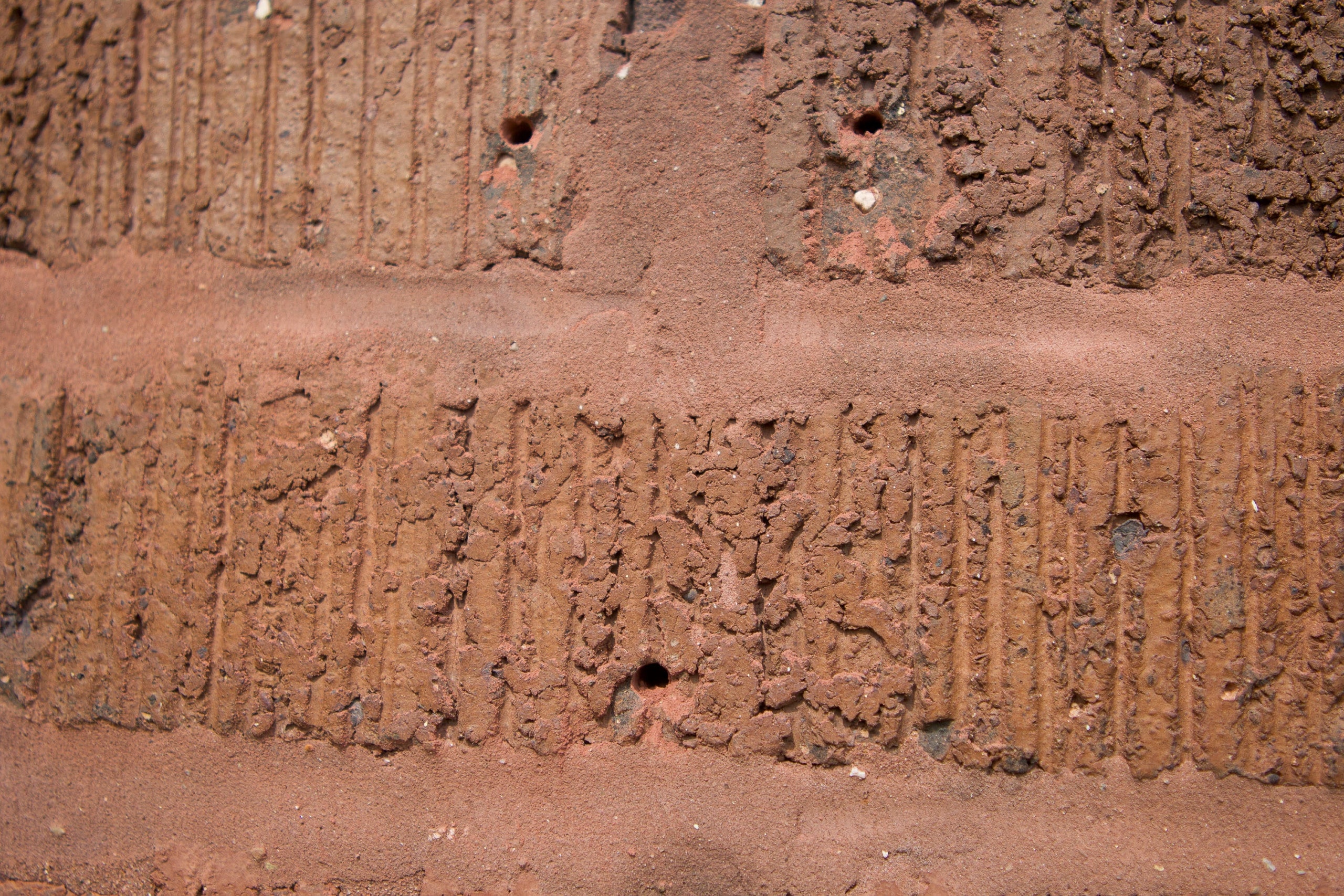 I read a lot of tutorials for screwing into brick before I started. Some said to drill into the mortar, while others said to drill into the brick itself. I ended up opting to drill in the middle of the brick because I was afraid the mortar would be too crumbly and therefore, not secure enough. I marked my three holes and drilled right in. If you’re using a regular drill on the hammer setting, you’ll need to put a bit of force into it. 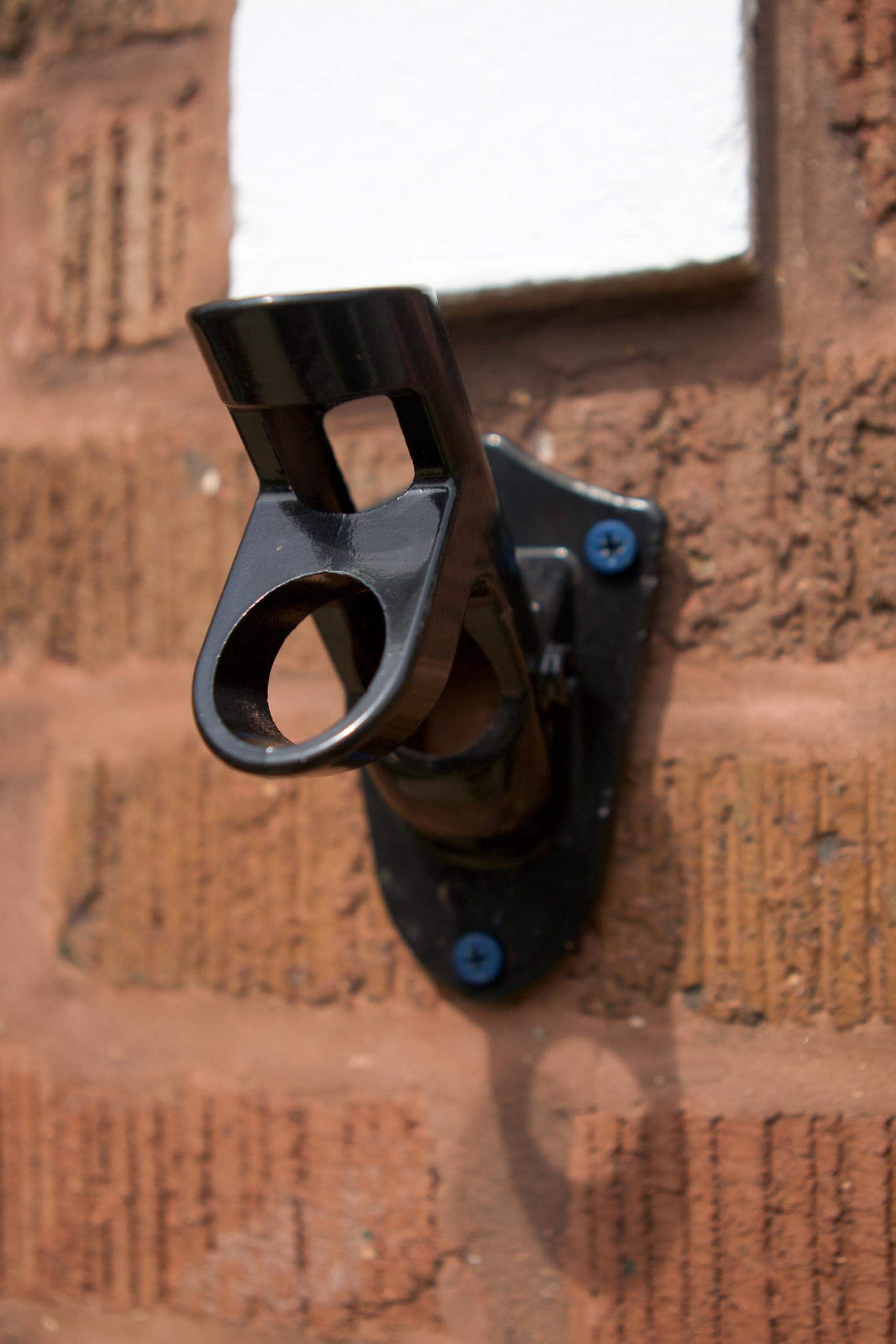 With my three holes pre-drilled, I easily attached the concrete screws. These are blue and I actually don’t mind that. If you wanted them to blend in more, you could always take a sharpie marker and color them in.

Once the screws were in, I pulled on the bracket really hard to test it out. It didn’t budge. I think this bracket will be here to stay! The flag we own was actually Finn’s late grandpa’s flag. It has been sitting in our house for quite some time and it felt really good to finally get it hung up. We only owned the flag, so I ended up buying this flag pole to hang it it on (the bracket came with the pole). It’s fully adjustable, so if we ever display a smaller flag we could still use the same pole. 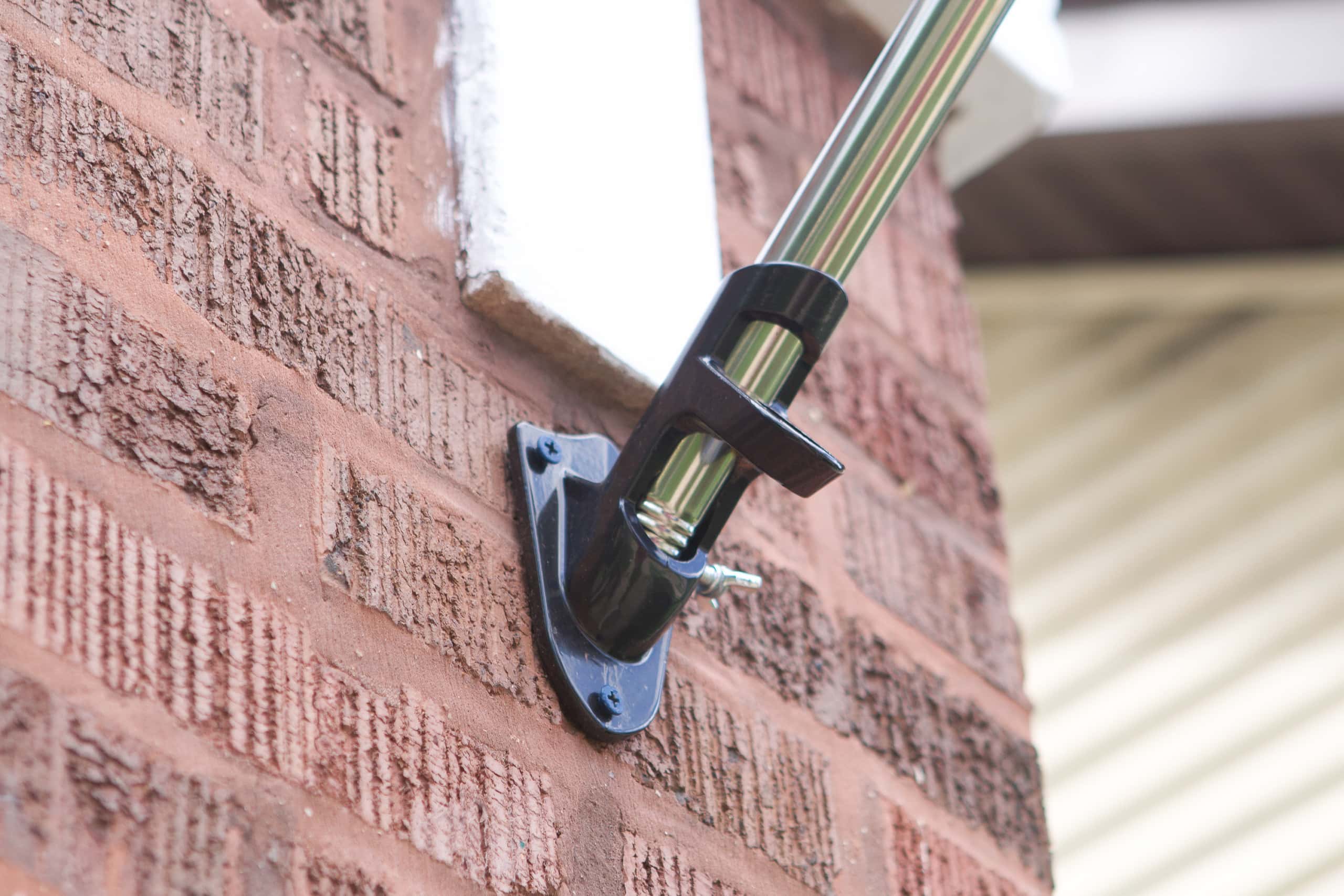 To secure the pole, I just put the flag pole in the slot and tightened the wing on the side so it holds it in place. 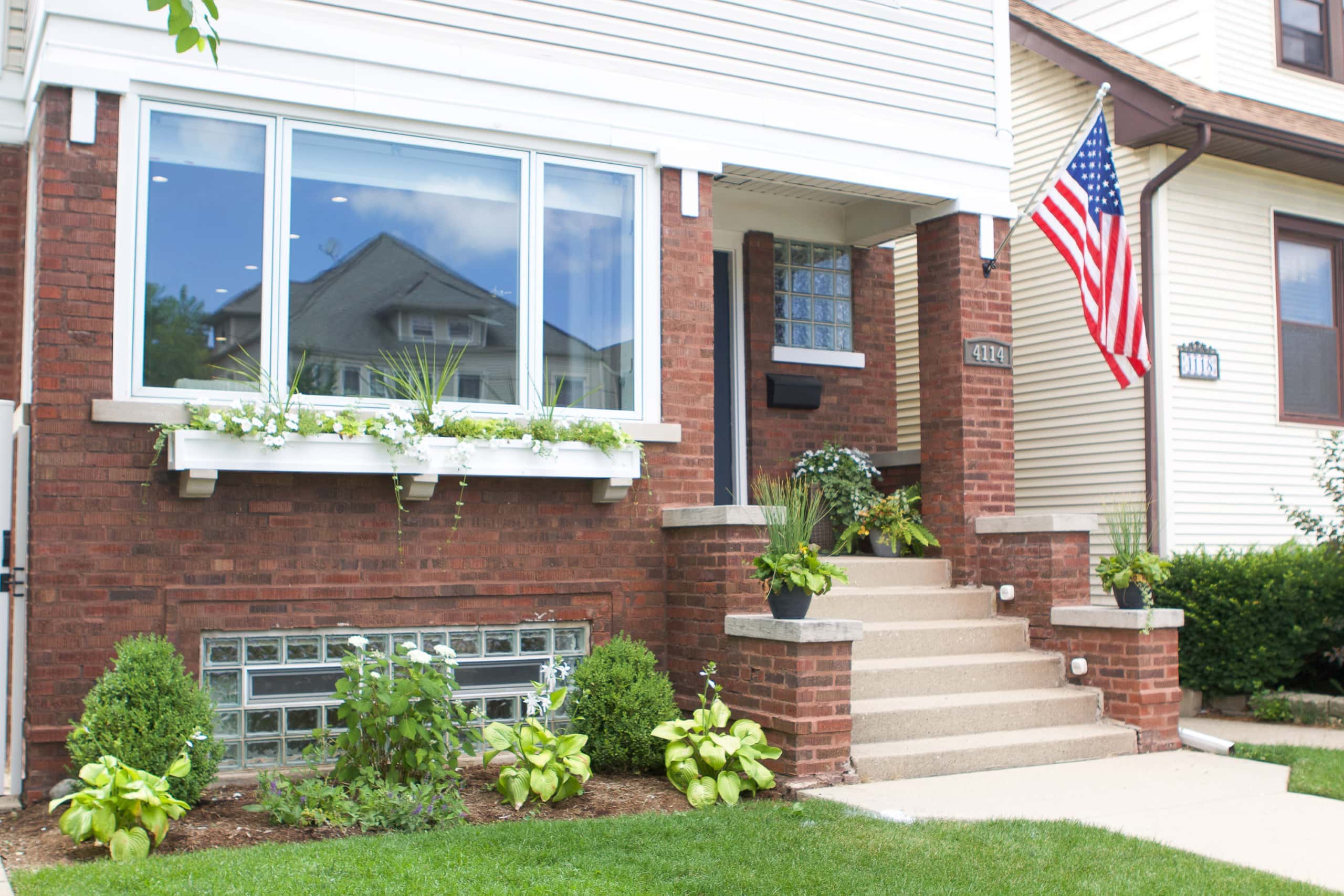 It really does look nice out here and I’m feeling proud of all of the updates we’ve made to the exterior of our home. 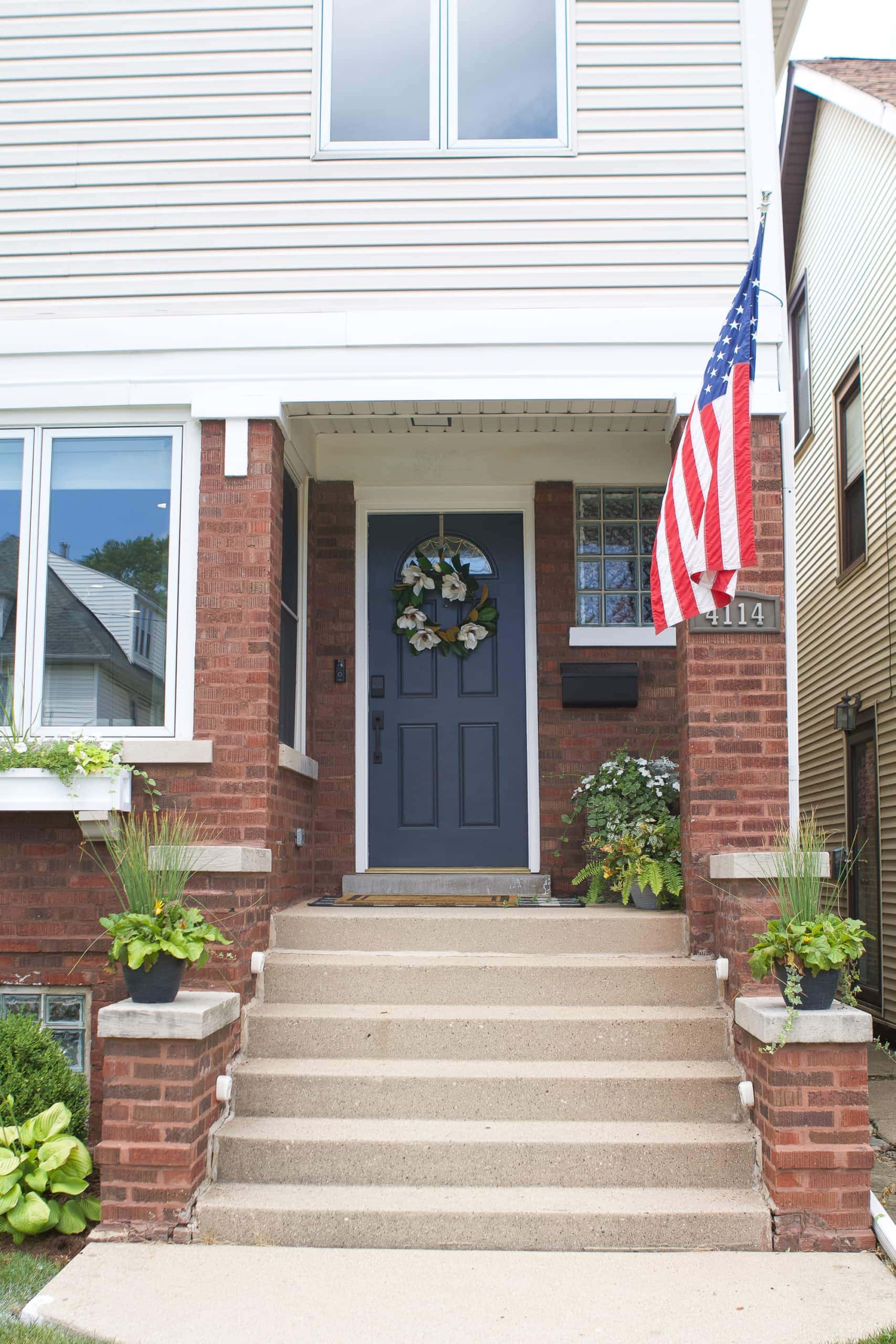 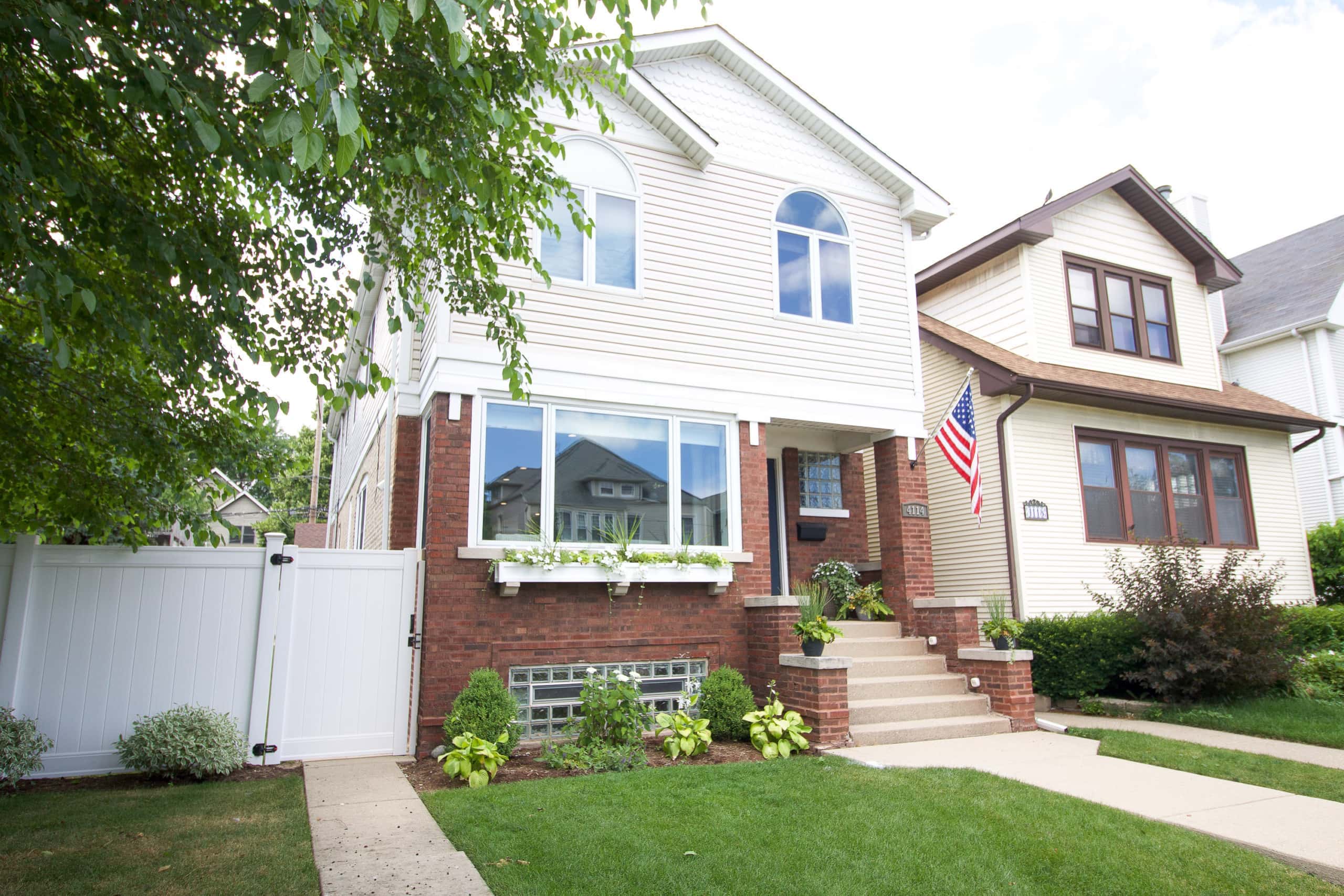 Here’s a random way to end this, but do you want to hear a fun story about flags? Our good friends decided to own the holiday “Flag Day.” So many people have plans for the other holidays during the summer, and they wanted this to be their holiday when they could celebrate with all of their friends and family (because not many people have activities booked for Flag Day). Last year was the inaugural year and everyone had to design and bring a flag to the party. Now, whenever friends visit their house, they’ll fly their personal flag welcome their guests! How cool is that? Maybe we’ll have to consider doing something fun like that with our new flag pole. Do you have a flag pole? What flags do you display on yours? I may need to buy a few more to swap out every now and then.