What Are The First Steps Of A Kitchen Makeover?

Seriously though… what are the first steps of a kitchen makeover?! I had no idea when we set out on this crazy journey. 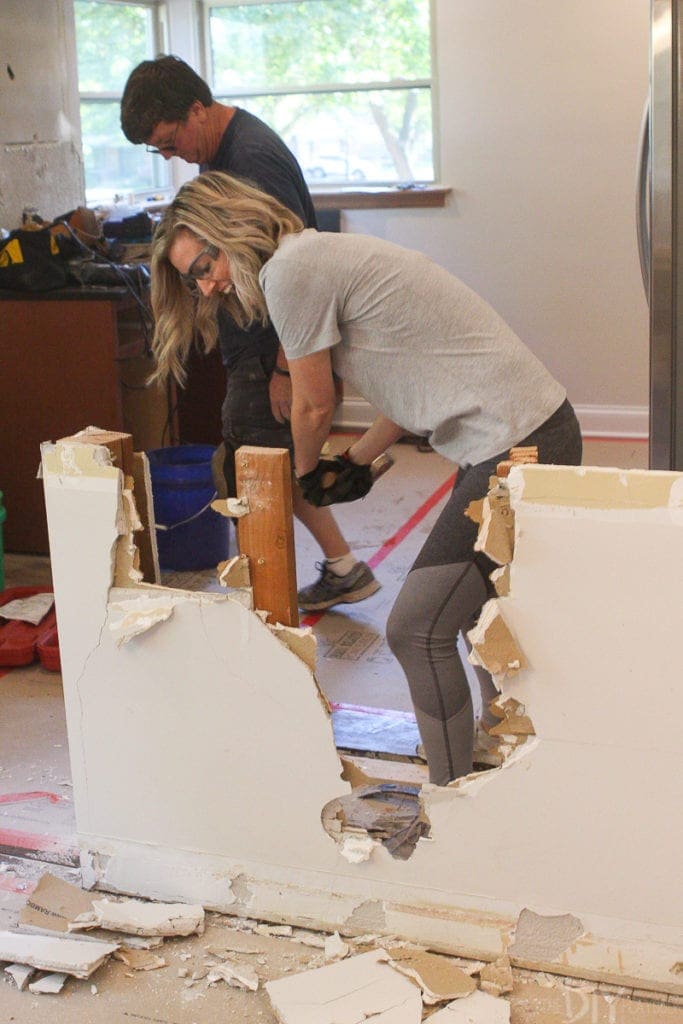 Of course, I knew demo came first, but then what? I want to share an informal check-in today to help answer this question for others who have plans to take on a kitchen makeover soon. Plus, I figured I needed to check-in on the progress since things are moving right along!

The First Steps Of A Kitchen Makeover

After the demo, the first steps of a kitchen makeover include plumbing changes, electrical changes, insulation, and new drywall. Essentially, you have to get the stuff that lives “inside of the walls” in order, so you can cover the walls again and move onto the things that live in plain sight. 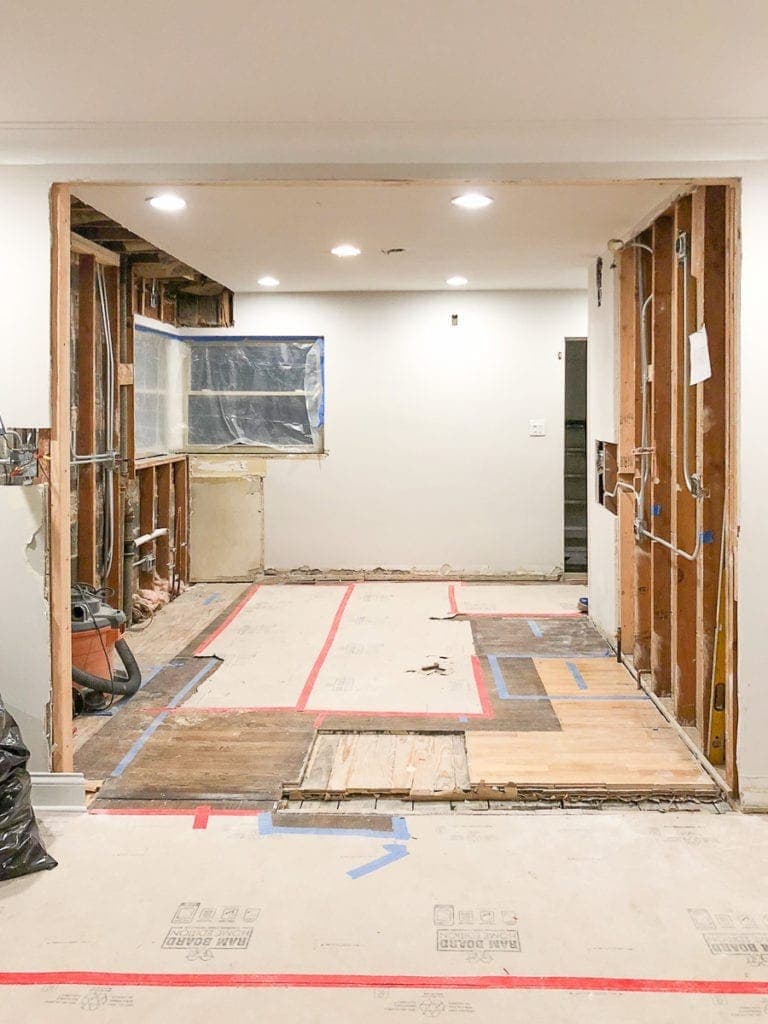 Our contractors were responsible for tackling the electrical and drywall, but they weren’t comfortable with doing the plumbing. So we actually hired a separate plumber to come in first, and then the contractors came in to start on the rest. Here’s a little insight into our progress, including some tips I’ve already learned about these first few steps. 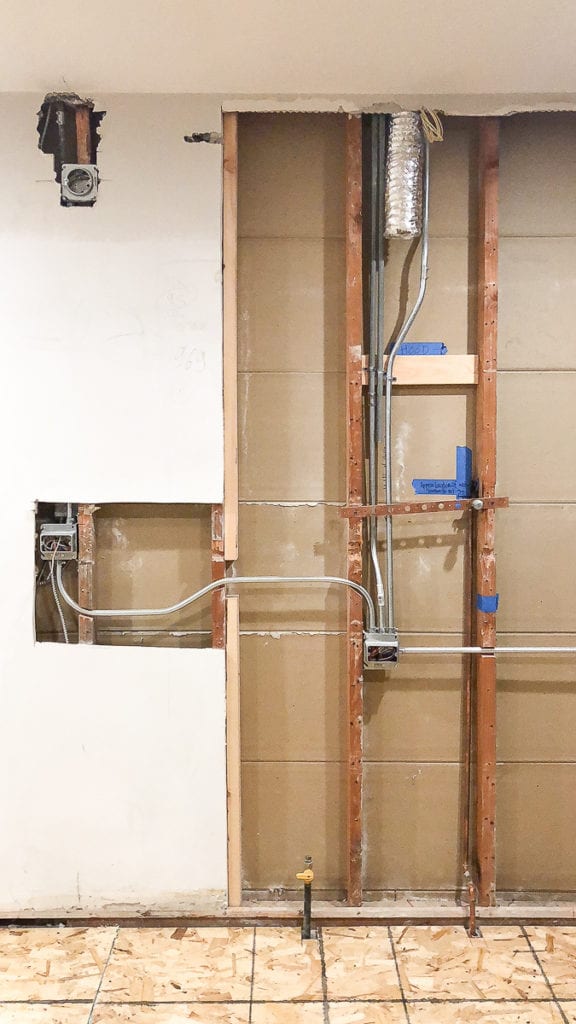 We didn’t have a ton of plumbing needs, but the ones we did have on our to-do list were pretty darn important. Because both the refrigerator and stove will be “living” on different walls in the new kitchen, we needed to get a water line moved and the gas line moved.

The water line for the refrigerator seemed like an obvious plumbing task, but I had no idea that moving the gas line for the stove was actually a job for the plumber too. These were fairly easy tasks for the plumber and only took a few hours, but there was a little homework on my part that I needed to do before the plumber arrived. 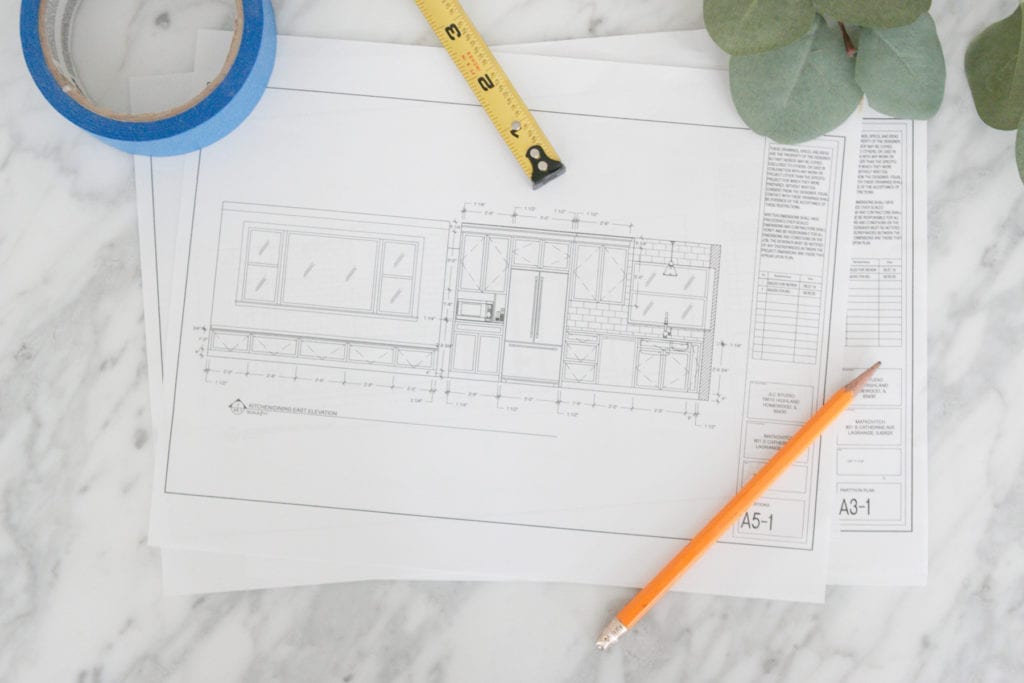 I read through the blueprints and double-checked the dimensions on all of my appliances so that I knew the exact location of the new refrigerator and the new stove. I taped out these exact locations on the floor of the kitchen so that the plumber knew exactly where he could run the new gas line and new water line to be located directly behind the new appliances.

Tip: I would highly recommend talking to the plumber and making sure he can run both lines as close to the wall as possible. I bought counter-depth appliances so that they wouldn’t stick out in front of the cabinets, but that could still happen if these pipes weren’t tucked back close to the wall. Be sure to have this conversation with your plumber so you can push those appliances as far back as possible for more space in the kitchen! 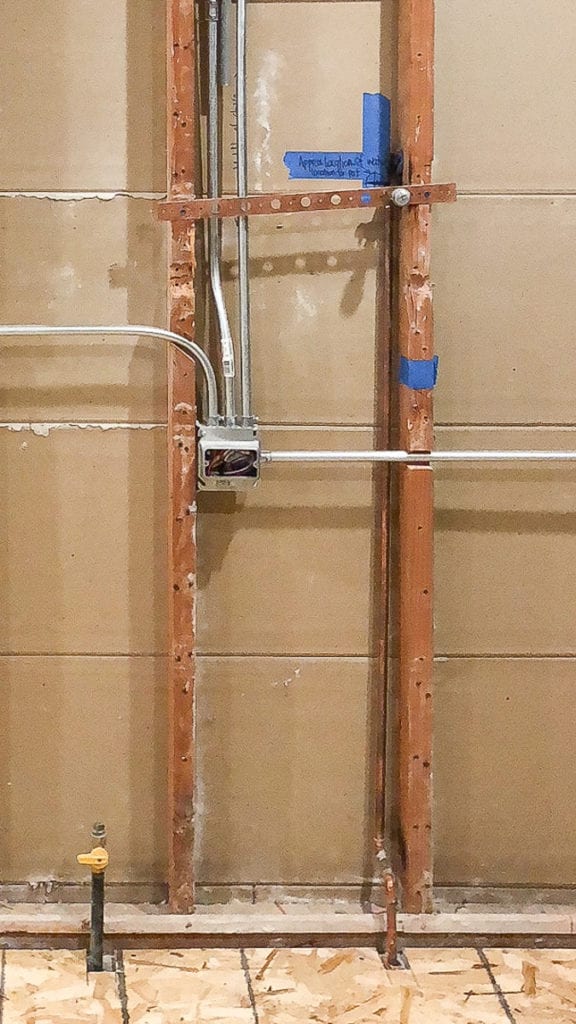 I also did the same labeling system with my pot-filler because the plumber had to run a water line to supply the pot-filler with water. It was very helpful to have the exact pot-filler in my possession so I could plan accordingly.

Tip: Try to have as many of your items for your “new” kitchen as possible before the construction starts. It sounds crazy, and it is when it comes to storing everything, but having the specs at your fingertips is a huge benefit!

After the plumber was done with his to-do list, it was time for the contractors to come in. They came in and ended up taking the remaining plaster down so they could work on the electrical without fighting with the remaining walls. They were also able to demo the soffit, which already makes such a big difference in the size of the kitchen. It already feels so much more open without it! 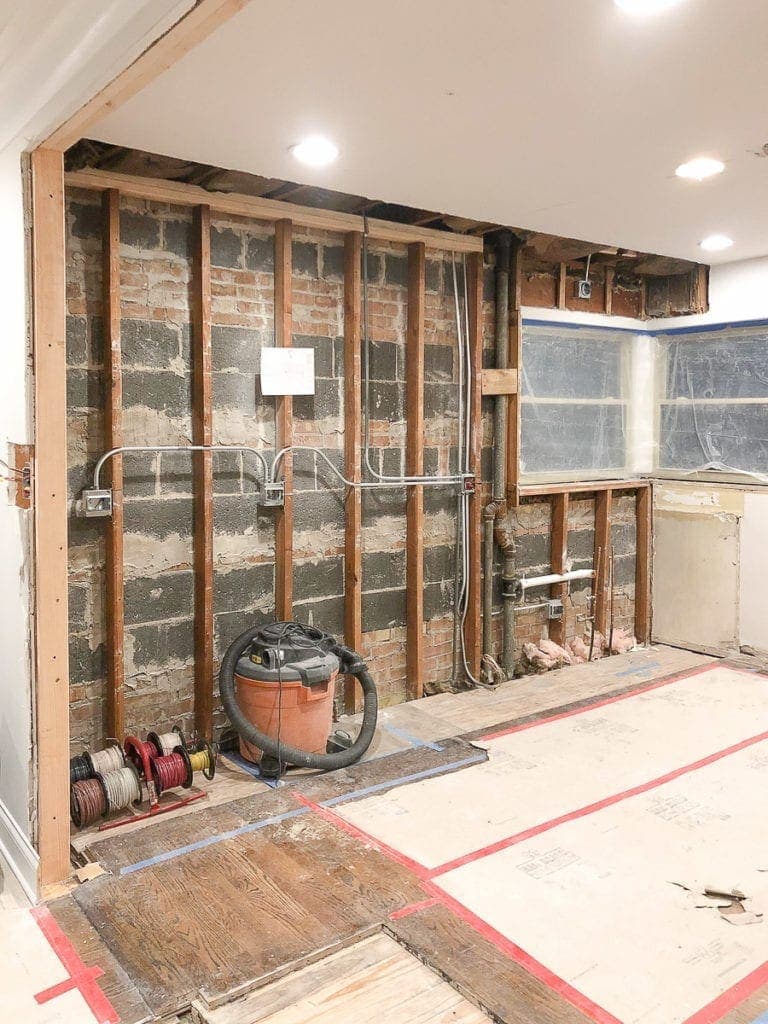 Once we were down for the studs, it was time for them to tackle the electrical. They pulled out all of the old wirings and re-routed some of the electrical and added new where needed.

Tip: Be sure you know where you want your outlets to be located (if you have a preference). Also, be sure you know how many outlets you want (like if you want any hidden in the cabinets!) and any other locations you need to be wired (for lights, appliances, or a hood). 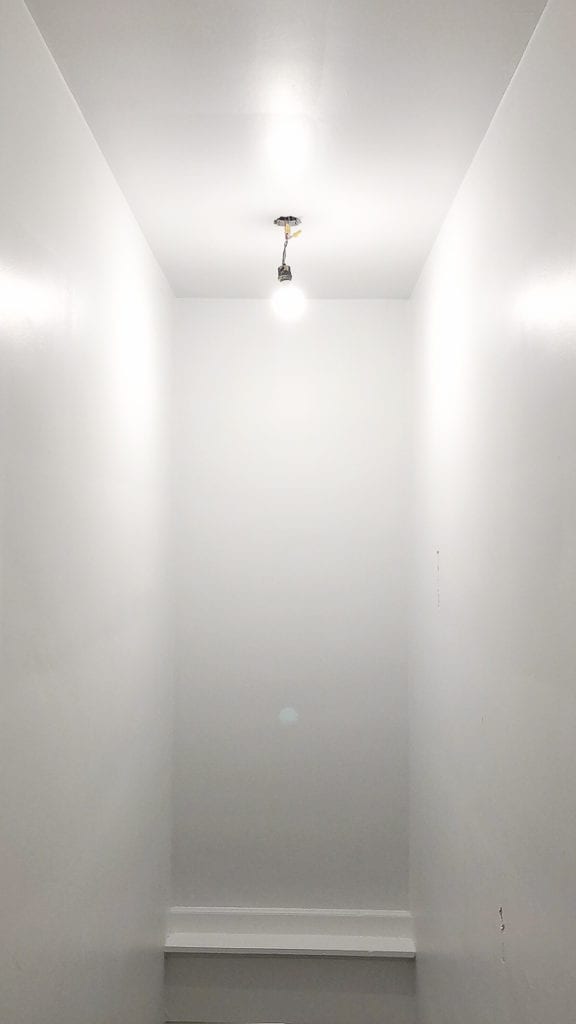 Electrical Tip #2: While the contractors were already wiring so much and already up in our attic making this happen, I asked if they would add a light in our basement stairwell.  These additions may come at a small cost, but it’s so worth it to get a few things off of your list while the place is already a mess! Make a list in advance if you can so you can discuss all of these “extras” with the contractors.

This may not be necessary for everyone’s kitchen remodel, but when we pulled the plaster off of our walls we realized that it had ZERO insulation!! And even worse….this was an exterior wall! Yikes.

The total for buying insulation for this entire space was under $50, which will be well worth it in the long run! 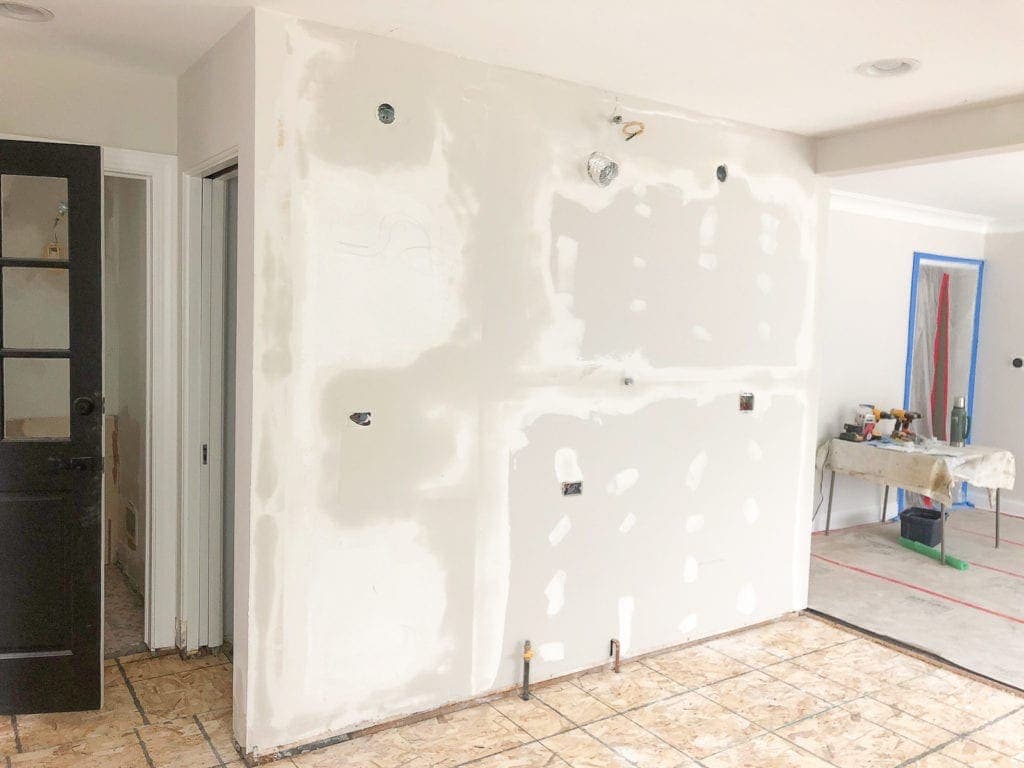 And last but certainly not least, it’s time to cover up all of that electrical, plumbing, and insulation with some drywall! 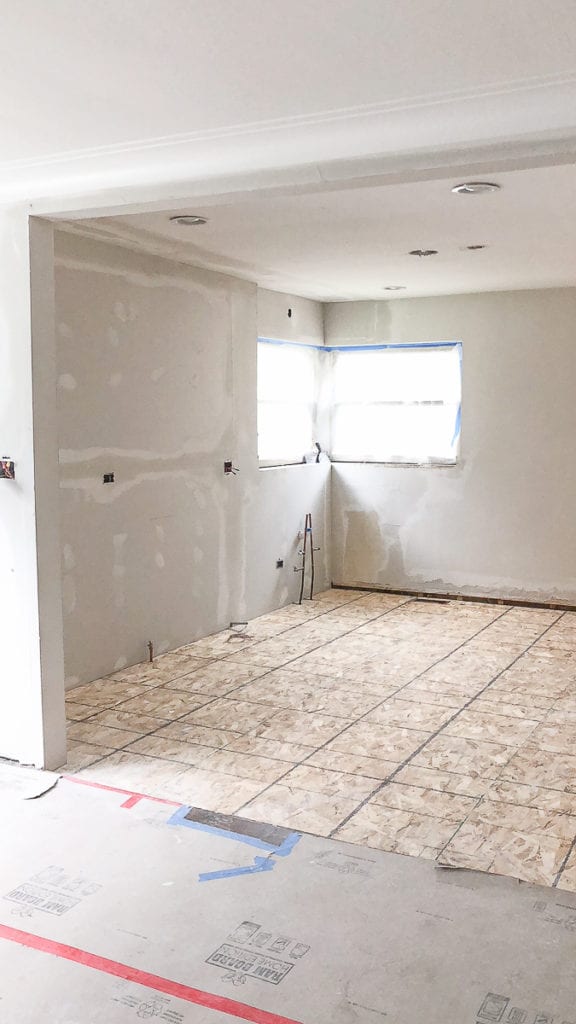 I couldn’t believe how different the room looked with the added drywall. I know we have a long way to go, but I’m seeing glimmers of light at the end of the tunnel and I could not be more excited!

Oh, I have one more thing to discuss before I sign off for the day. Let’s talk flooring! 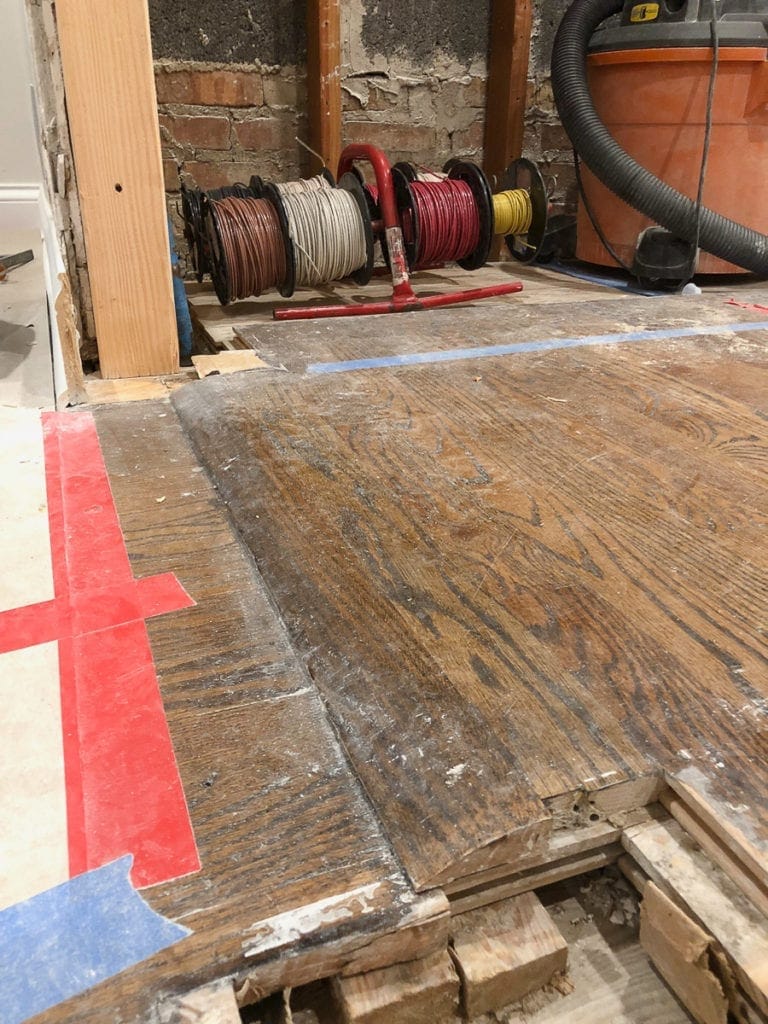 We used to have a small “step up” into our kitchen because one of the previous owners put new hardwood floor right on top of the old flooring and even ran the wood in the opposite direction of the rest of our home’s hardwood floor. Annoying, right? 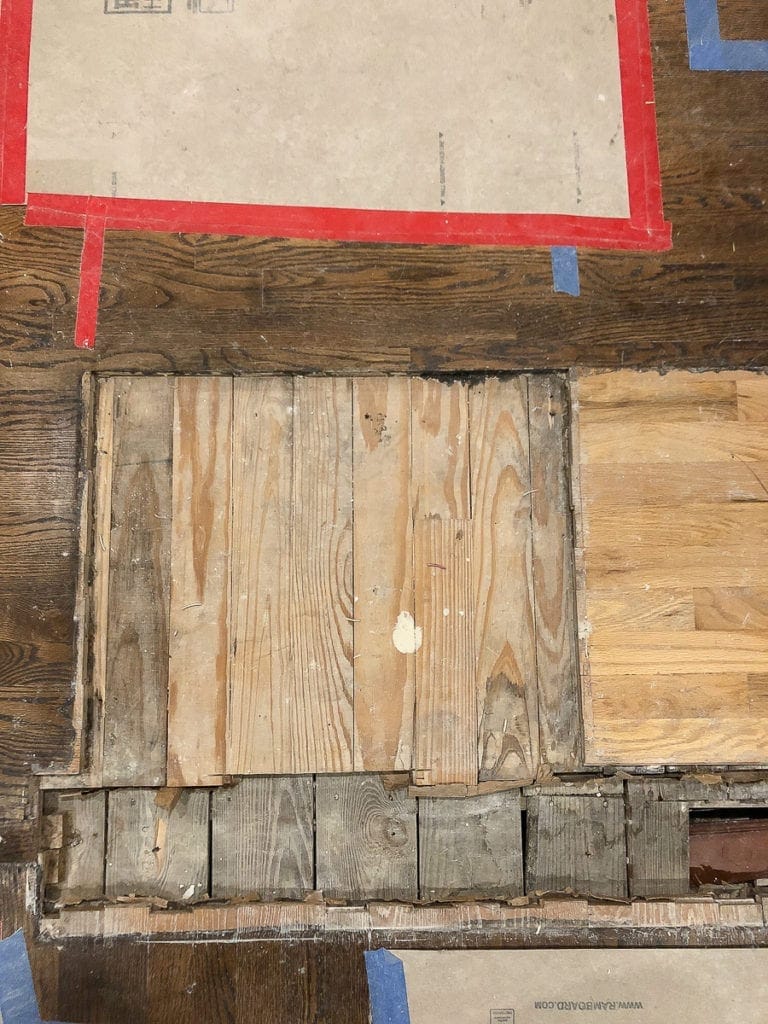 Our original plan was to extend the step up and just fill in the parts of the floor that didn’t have any hardwood flooring because there were cabinets there.

Thankfully, our contractors talked us into removing all of this old flooring and filling it in with new hardwood floor to match the remainder of the house. And the best part of this solution? It means we no longer have a step up into the kitchen, but instead, the floor will seamlessly run throughout the first floor! This is why you see a subfloor down on the floor right now.

Hopefully next time I check in, I’ll have more updates on this exciting development! Until then, be sure to follow along on InstaStories for the real-time updates.