Last week, I dove into the details of how we hired a professional designer to re-work the kitchen layout and then draw up blueprints that reflected these changes.

Like I mentioned then, I highly recommend this step to anyone else planning a kitchen renovation. I specifically recommend it for those who are looking to for a new kitchen layout. Hiring Jen was probably the BEST thing we did so far. She came up with ideas I would have never thought of, which is what I’m here to report on today.

Figuring Out Our New Kitchen Layout Step 1: Figure Out What Isn’t Working

The first thing we did before bringing in Jen was to chat about what wasn’t working in our kitchen. We’re actually grateful we lived in our house (with this ugly kitchen) for over a year because this time helped us to get to know how we use our kitchen.

Honestly, if we tackled the kitchen reno right when we moved in, we probably would have landed on a completely different layout since the pain points last year were so different than they are now, after living here for a year.

Here’s what we do not love about our current kitchen/dining room layout (seen above).

After Matt and I identified all of the problems with our current kitchen, we called Jen in to take a look. She walked the space, discussed the issues, and took measurements… of everything. 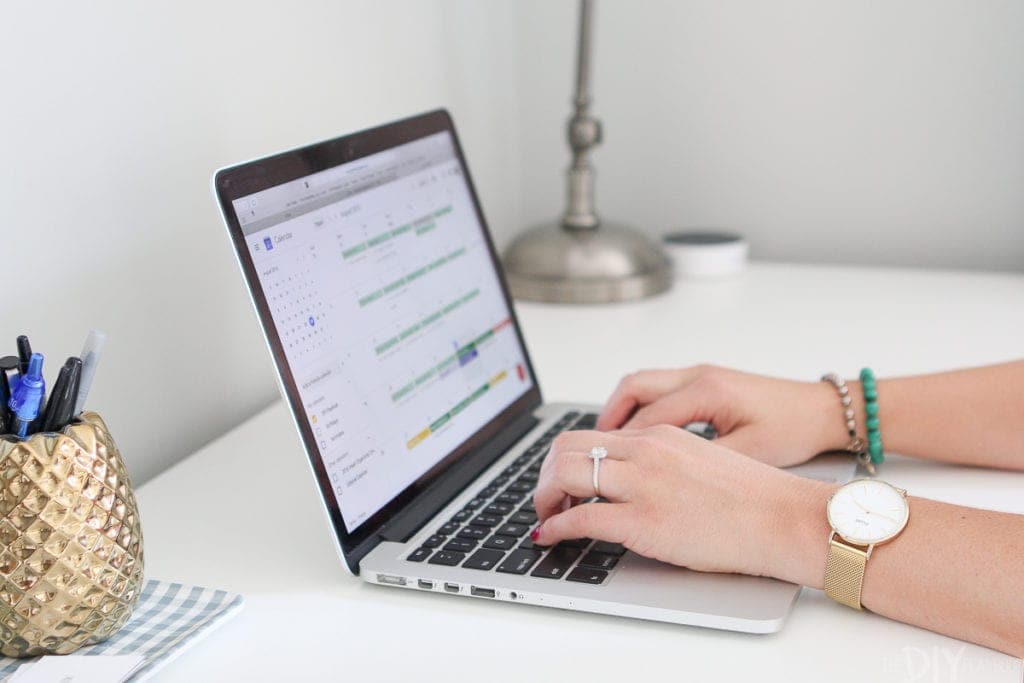 A few weeks later, she came back to us with specific layout ideas that addressed many of the pain points.

Here were her ideas…

Option #1 was probably the least amount of changes to the footprint of the kitchen, yet still addressed out concerns. Plus, what I loved about Jen is that along with the blueprints, she added a visual representation of ideas that she had for the space. That way even if we didn’t go with that specific layout, we still benefitted from talking through her ideas. In this case, the large command center and the pantry drawers!

As for the layout for Option #1, Jen took out the peninsula to open up the space and added more cabinetry along the dining room so the two spaces would become more of one big cohesive space.

Pros: Love the idea of adding cabinetry, loved the peninsula gone.
Cons: No major concerns with this layout, just thought we could get even more bang for our buck in this space, so I was excited to see the larger changes in the other options.

Option #2: No Peninsula, Added Storage By The Sink 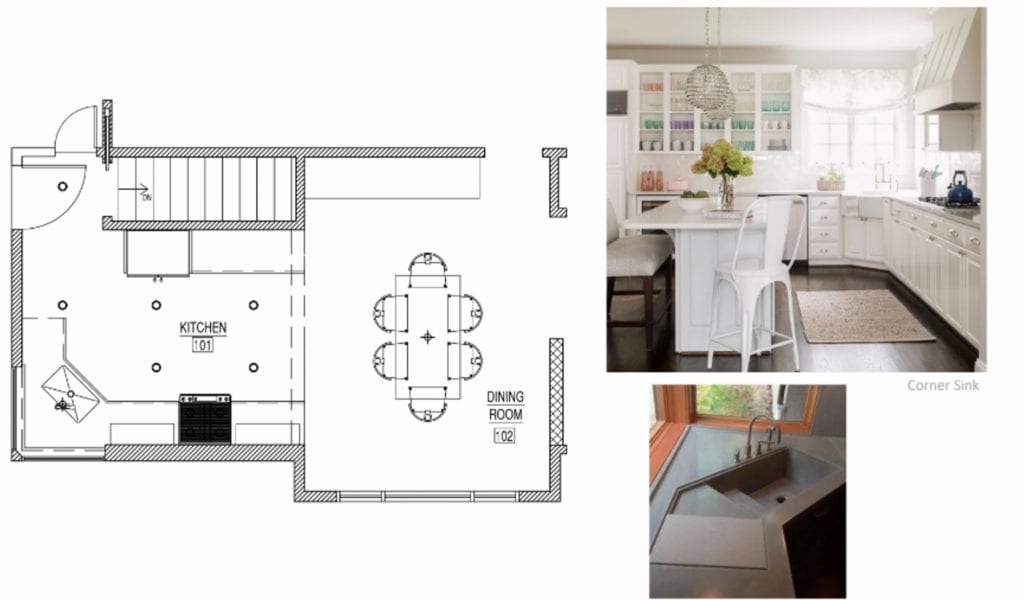 Option #2 was similar to Option #1, but Jen added more storage and more space by the sink by moving the sink on an angle and building the cabinetry/countertop around it. The photos attached to her proposal really helped me visualize the new look.

Pros: Love the idea of more cabinetry and storage.
Cons: Not obsessed with having the sink on the angle. 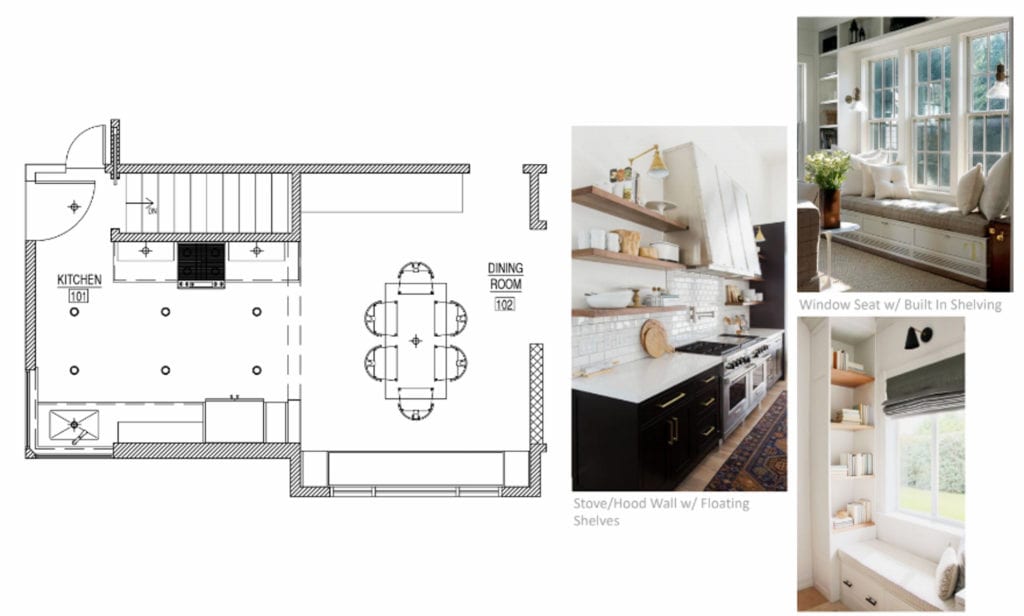 Option #3 proposed that the stove and the refrigerator trade places. it also suggested that I add open shelving along the stove wall in order to make the space feel a lot more light and airy.  She also proposed the idea of a window seat under the window in the dining room.

Pros: Obsessed with the idea of a window seat for both aesthetics and function (aka lots more hidden storage). Also, love the idea of open shelving because it’s a perfect way to open up the space and make it feel lighter and less like it feels like now — a dark hole.
Cons: Open shelving definitely comes with potential drawbacks. Will I love it? Will the items get dusty? Will they be more cute than functional? 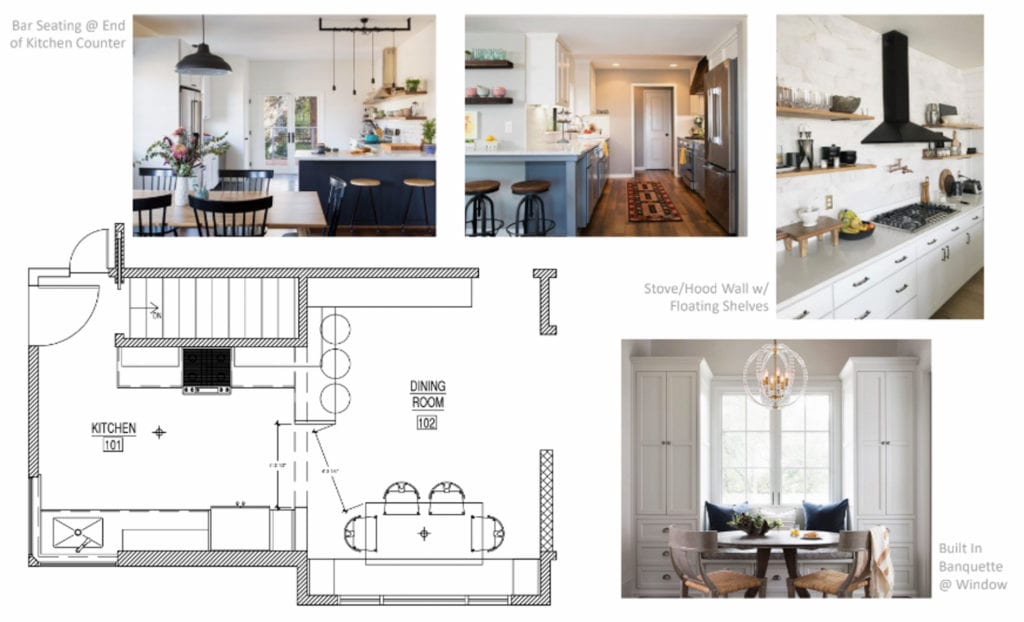 Option #4 was interesting to me because it was a layout I would have never thought of. Jen opted to keep the peninsula (with some revisions) and open up the space by moving the dining table to the front of the dining room. She suggested we use the window seat as a built-in bench to save space. This layout would keep the traffic route intact while making the dining room feel a lot more open than it does now. 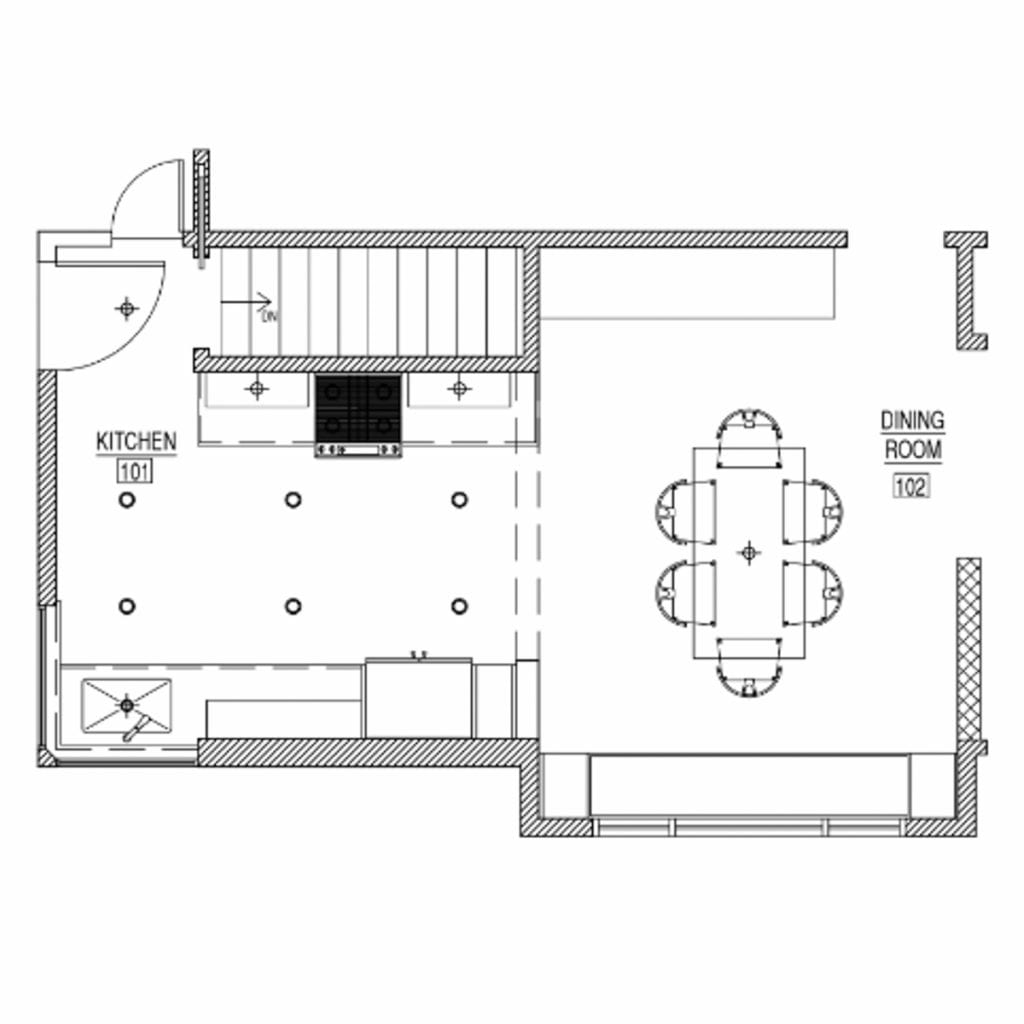 Although we really liked all of these options, we ultimately decided to go with Option #3. We loved that this layout allowed more of an open concept in our home. We also loved that it added a lot more function to our dining room, allowed the kitchen to be more light and airy (I’m looking at you, open shelving), and provided lots of extra storage with the dining room buffet AND window seat! 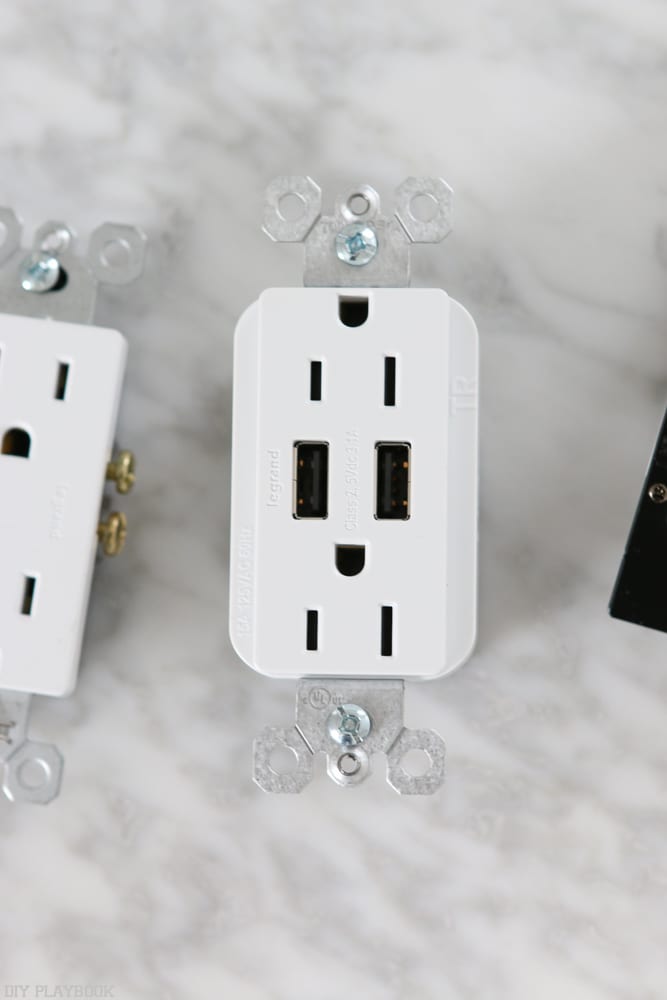 The last thing we did with Jen was iron out the final details in the blueprints. Outlet placements, light fixture location, cabinet details – everything! That way we had a blueprint that clearly identified as many details as possible before we moved forward ordering the cabinets, sink, appliances, etc.

I’m so excited about the plans and can’t wait to see this new layout come to life! And I have Jen to thank for this because I would have never thought to swap around the appliances, open up the peninsula, or add a window seat. All brilliant ideas that are going to be GAME CHANGERS for this space!