What I Learned from Our Kitchen Renovation

First, thank you for all of the love on our big kitchen reveal yesterday. We are so happy with the space and it’s wonderful that you like it as much as we do!

Our kitchen renovation has been one of the biggest home projects we’ve ever tackled. And while we didn’t DIY much of the space, I did manage the project and I oversaw all the details from start to finish. When you’re doing something like that for the first time, you’re bound to make mistakes. I certainly did. Throughout the process, I kept telling Finn, “I’ll be so much better prepared for our next kitchen renovation.” To which he gave me an eye roll and said he hoped we weren’t renovating another kitchen for quite some time. I really did learn so much over these past few months and I wanted to share some of my kitchen renovation lessons and mistakes with you. That way we can all learn together and be better prepared for big home projects in the future.

Inspect Items When They Arrive I’ve emphasized the need to have as many items on-site BEFORE starting demo many times here on the blog. But there was one thing I neglected to do myself…inspect those items. We had boxes show up at our door starting in August and we just stored them in our garage until it was time to install them. We didn’t want to open up the boxes, make a mess, and potentially lose any parts, so we didn’t even peek inside. Big mistake. When we went to install the farmhouse sink, we noticed that a corner had chipped  during shipping. Thankfully, the company was able to send one out immediately – we got a new one in 24 hours – but it did throw a small wrench in our timeline. If I would have opened the box (that is literally the sink in the box in the photo above!!!) when it arrived in September, I would have seen the mistake and rectified the situation then. Lesson learned! 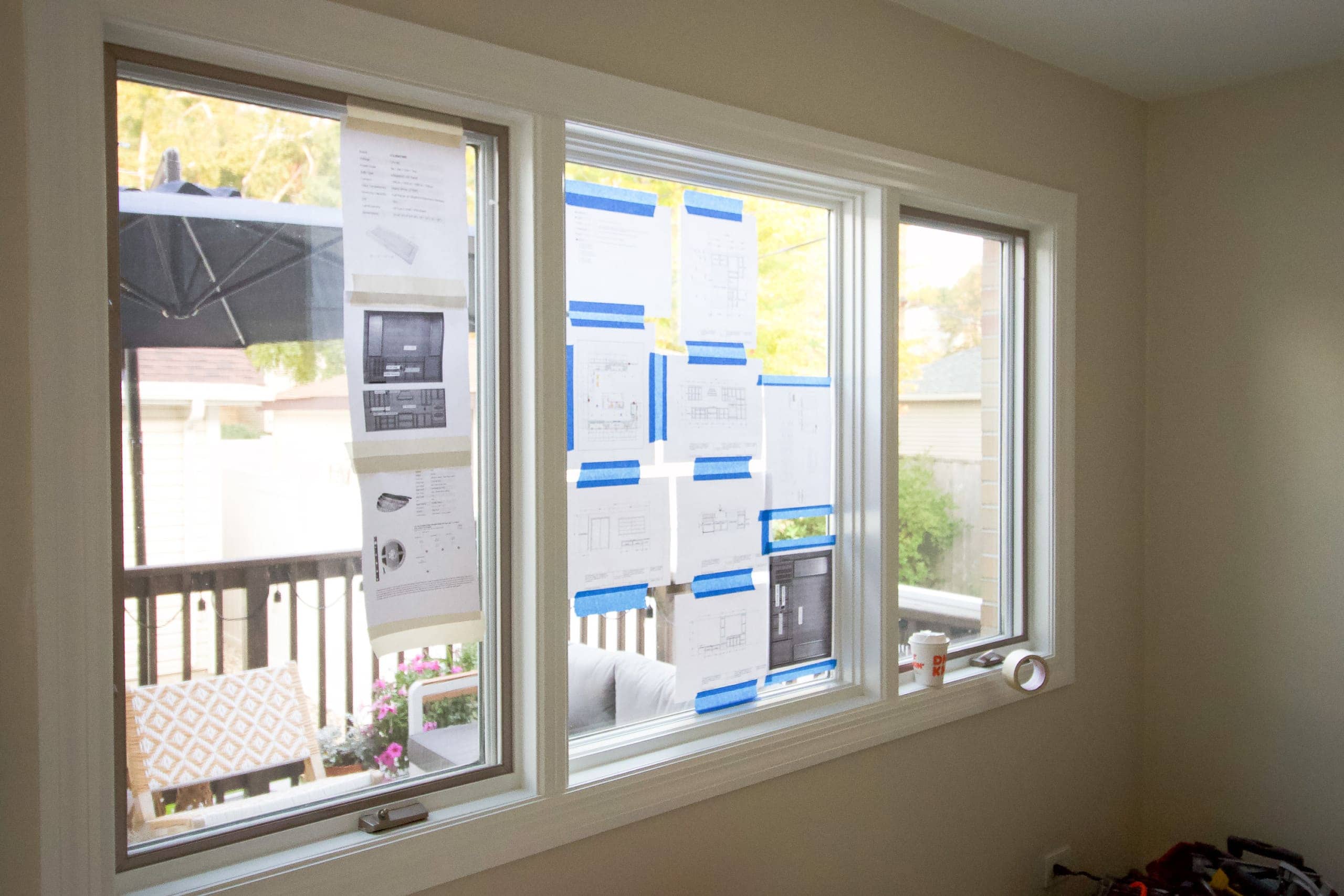 We drew up the plans, ourselves, for placement of all of the main elements: water, gas, electric, etc. Finn and I walked through the kitchen, took notes, and then he drew up some plans in Excel. We then handed those plans over to our crew and they taped them up on the window and followed them exactly as they were drawn. Well, we made quite a few mistakes. We somehow completely forgot about our pot filler and didn’t include it on any of the drawings, even though we bought a pot filler and really wanted one in the kitchen. One night, after all of the water lines were already installed, we were shopping online for new items for the kitchen. We were looking at big pots and I mentioned how nice it was going to be to use them with our pot filler. We immediately stopped, looked at one another, and frantically ran to the kitchen to look on the wall – and there wasn’t any water going to that area. Our contractor had just finished moving all the lines that day and his crew had drywalled the area. Even though it was 10 pm, we called him right then and explained the situation, apologizing profusely. Luckily, he was amicable about it and the next morning his crew spent a few hours rerouting the water for the pot filler. This set our timeline back a bit and I’m sure the crew wasn’t too happy with us, but I got donuts and coffee for them that day to smooth things over! That was just one of many little mistakes we made. Another included our incorrect notation for the placement of the pendant lighting over the island that had to be fixed after the fact.  (I chatted about that in this post.)  And another mistake was forgetting to put an outlet behind our wine fridge. Luckily, we have one in the cabinet next to it, but still, it was such an oversight! For the most part, I would chat with my contractor in the morning when they arrived around 7:45 am and we would check in later that day. I pretty much let them do their thing all day long. However, he had to call out for me a number of times for more information about some of  the items they were installing – the oven, stove, pot filler, etc. I would have to stop working, or taking care of Rory, to rush to my computer to find the item and print out the specs. 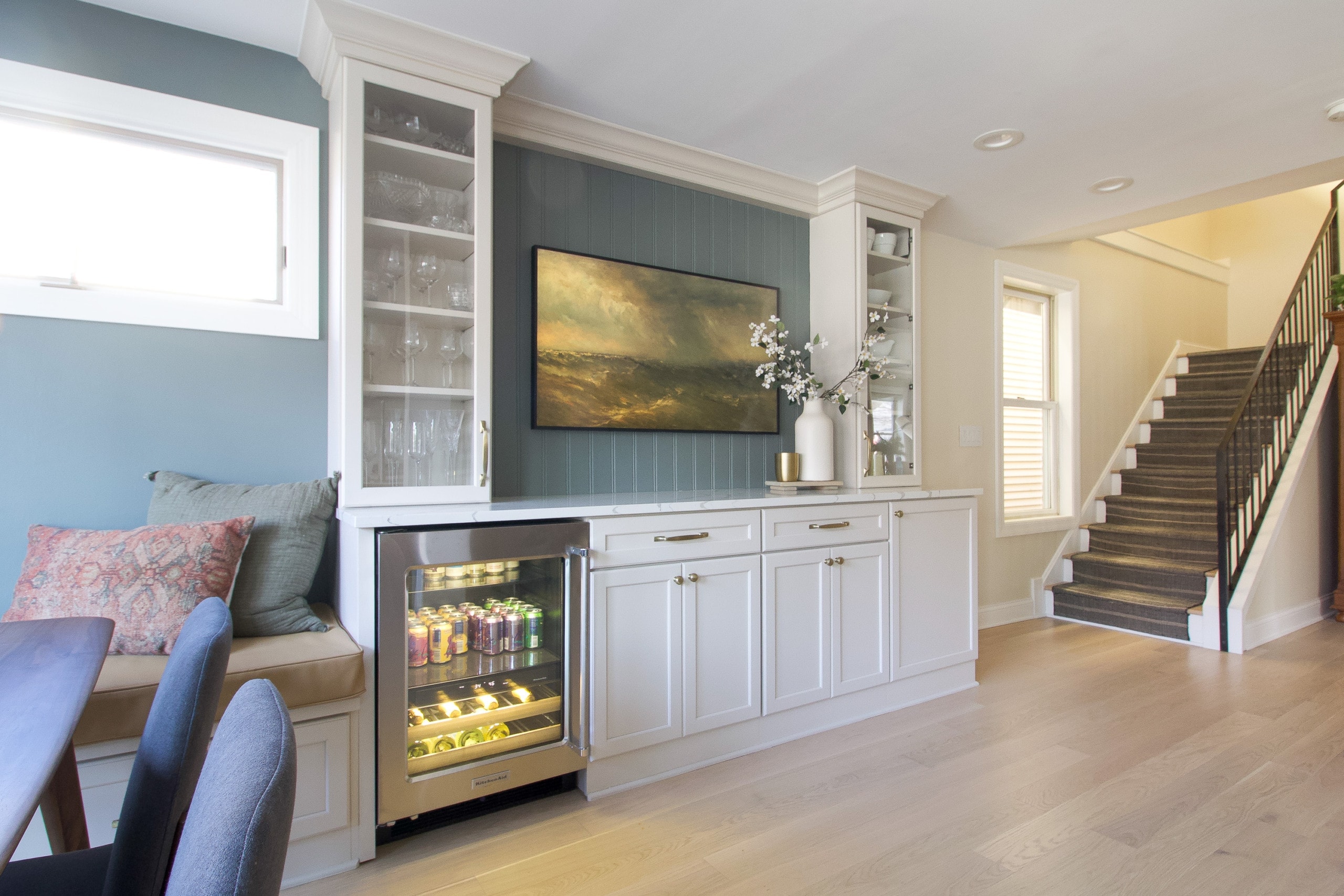 I’ve touched on shipping delays in this blog post, but I really wasn’t anticipating having to wait so long for some items to arrive. Of course, COVID added another element of difficulty to the process. I started planning for the kitchen back in the spring and I really didn’t start ordering most items until early August, knowing that the demo was going to happen in September. I was worried about having an overflowing garage and not being able to park in it. Looking back, I wish I would have ordered things as early as possible, even if I had to store them for quite some time.

Remember the Mess is Temporary 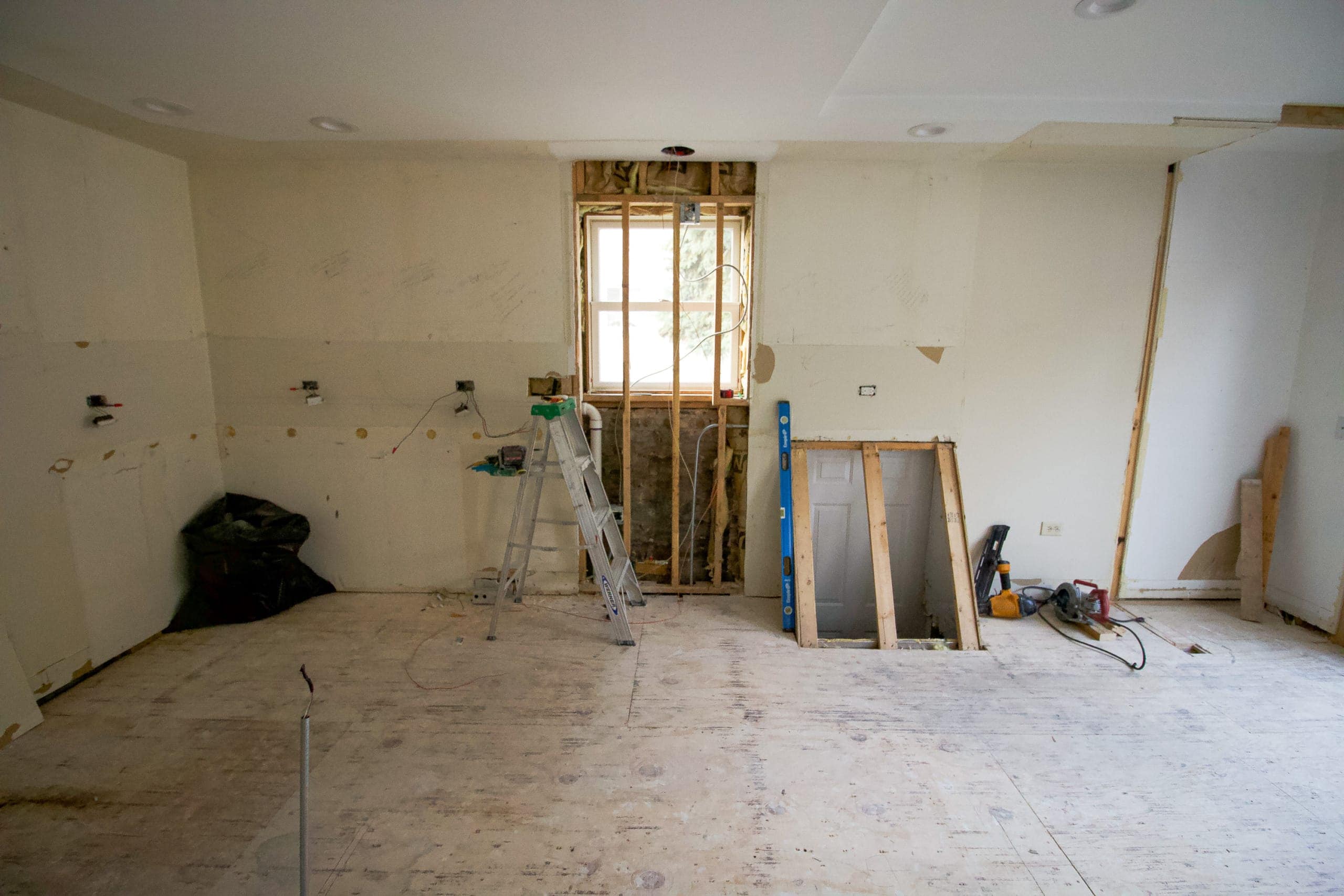 We’re big fans of keeping a clean and organized house. It just makes us feel more relaxed and calm to know where everything is. Living in a construction site wasn’t the easiest task in the world for us, especially with a baby. The dust made its way into our living room and upstairs as the weeks went on. We tried our best to remind ourselves that the mess was temporary and someday we would have our clean, organized home back, even better than before! Here are also a few things we did to curb the mess… Throughout our kitchen renovation, the basement became our new hang out area. Finn’s home office is down there; we setup our temporary kitchen down there; and we often played with Rory down there because we didn’t want her to be in the living room, near the action. The basement became the new hub of our home and since Finn was there most of the time, working, a lot of the upkeep fell on his shoulders.

If you remember from this blog post about our temporary kitchen, we had a system of putting dirty dishes in a plastic bin to then be cleaned at the end of the day. Finn offered to do the dishes in our bathtub each night, but sometimes I would wake up and the tub would still be full of dirty dishes, I would immediately get annoyed because my dirty coffee mug, from the day before, would still be in there. And then I realized that we really should be splitting up the work. Just because Finn was physically closer to those dirty dishes, that didn’t mean he had to wash them all. So towards the tail end of our renovation, I started helping out with the dishes more and it was much more manageable with two of us. Talk to your spouse about the new tasks that need to get done during this “new normal.” You’ll prevent a lot of fights that way. Trust me!

Learning as We Go At the end of the day, there were so many kitchen renovation lessons we learned and mistakes we made. I think no project is flawless. You’ll always run into hiccups and that’s just a part of the process. Learn, move on, and make the next project even better!

If you’re looking for any kitchen sources, head to yesterday’s reveal post.

Catch Up On Our Kitchen Renovation